Department of Pharmacology and Toxicology, Faculty of Pharmacy 1, University of Benghazi, Libya

ABSTRACT: Gum Arabic (GA) is a water-soluble polysaccharide, obtained from stems of Acacia senegal trees as gummy exudates. It is a beneficial adjunct to the low-protein diet for chronic renal failure patient because it reduces serum urea nitrogen level. It is also have a good protective activity against CCl4 and acetaminophen-induced hepatotoxicity in rats but it failed protect kidney from gentamicin-induced nephrotoxicity. The goal of current study was to investigate the cardioprotective of gum Arabic aqueous extract against Cardiotoxicity induced by doxorubicin in rats. Wistar albino rats were divided into four groups, 5 rats in each group: Group A (as a control), group B (Doxorubicin (DOX)-only treated rats, 15mg/Kg, IP as a single loading dose), group C (GA 10g/Kg body weight, orally for 4weeks prior DOX treatment) and Group D (GA-only treated group). Histopathological examination and serum biomarker enzymes like Creatine Kinase (CK), Lactate Dehydrogenase (LDH), serum aspartate transaminase (AST) and serum alanine transaminase (ALT) levels were monitored at the end of study to evaluate cardiotoxicity. The study showed that doxorubicin-treated animals increased the levels of CK, LDH and ALT significantly and gum Arabic-pretreated rats decreased the level of LDH significantly. In gum Arabic-only treated animals, they showed no significant changes in all the serum enzymes compared with the control group. Histopathological studies of the heart showed marked cardiac muscle damage in doxorubicin treated rats and the damage was less in gum Arabic treated rats prior doxorubicin administration.The results indicate that gum Arabic administration have potential protective effect against doxorubicin-induced cardiotoxicity.

INTRODUCTION:Gum Arabic (GA) is edible dried gummy exudates obtained from the stems and branches of Acacia senegal or of other related African species of Acacia (Fam. Legumenosae).

These trees are abundant in the central Sudan, central Africa and in West Africa 1.

Gum Arabic is a complex polysaccharide indigiestible to humans and it has been considered as a safe dietary fiber by the United States, Food and Drug Administration (FDA) since the 1970s 2, 3.

GA is widely used in the pharmaceutical industries as an emulsifier and stabilizer for insoluble drugs as well as in food industries 4, 5.

The incorporation of GA into fiber-free diets resulted in increased water, electrolyte and glucose absorption from oral rehydration salts 4.

In chronic renal failure (CRF) patients, fecal bacterial mass and fecal nitrogen content were significantly increased and serum urea nitrogen was significantly decreased during supplementation with GA but nitrogen balance did not change significantly 6. Another study showed improvement in the quality of life and reduces or eliminates the need for dialysis in children with end stage renal disease 7. In an experimental model of CRF, treatment of rats with GA was not effective in either reversing the decrease in body weight or the increases in creatinine and urea observed two weeks after induction of the CRF 8.

The ingestion of GA was significantly reduced both the body mass index and the body fat percentage in health adult females so that the effect could be exploited in the treatment of obesity 2.  GA as a nutrient could be used for the prophylaxis against colon carcinoma particularly in individuals as enhanced risk 4.

Gum Arabic exerts a powerful immunomodulator and it favorably influences the course of murine malaria 9, 5.

Co-administration of gum Arabic in combination with aspirin in rats indicated protective effect against intestinal mucosal toxicity compared with that of the control 14. GA limits the cascading events of cyclophosphamide-induced urinary bladder damage because GA ables to neutralize acroline, the reactive metabolite of cyclophosphamide and / or the resultant reactive oxygen metabolites 15. Therefore, the aim of the present study was to investigate the potential protective effect of gum Arabic against doxorubicin-induced cardiotoxicity in rats.

Chemicals and Drugs: DOX (Adriamycin) 10mg injection was obtained from Pharmacia Co., Italy and the kits used for biochemical analysis were obtained from BioSystem , Spain.

All other chemicals and solvents were of analytical grades and were obtained from Omar Al-Moukhtar university store.

Gum Arabic Preparation: Crude gum arabic purchased from the local market in Benghazi, Libya which obtained from state of Kordofan, Sudan, it was obtained as a tears with different size and color, so that they were milled and sieved to obtain a fine clean powder free from any deprises. The GA solution was prepared freshly by dissolving 100 g of GA in 1L of drinking water to obtain  GA concentration 10g/100ml.

Experimental Animals: Male Albino rats of Wistar strain (250 ± 50g) used for the study were housed under standard hygienic conditions maintaining at 12hr light and 12hr dark cycle and fed with standard pelleted diet and water ad libitum. The experiment was approved in accordance with the International Animal Ethics.

Experimental Protocol: Twenty rats were divided randomly into the following four groups of five rats each:

Group A: normal control rats which received only water.

Group D: the rats were given GA only for four weeks

At the end of experiment, blood samples were withdrawn from orbital sinus then sera were separated by centrifugation for biochemical analysis and all rats were anaesthetized with chloroform and sacrificed.

Heart was dissected out and immediately preserved in 10% formalin and subjected to histopathological examination.

In the biochemical analysis, the serum transaminases (ALT and AST) levels were measured using the methods of Reitman and Frankel 16.

Histopathological Examination: Hearts from rats of all the groups were fixed in 10% buffered formalin and embedded in paraffin. Sections (5 µm) were stained with hematoxylin and eosin and were examined under a light microscope by a histopathologist who did not know the details of the treatment groups.

In gum Arabic treated-only rats (group D), the level of all enzymes showed no significant change compared with the control. 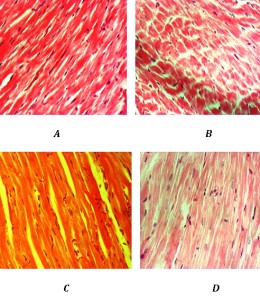 FIG. 1: REPRESENTATIVE PHOTOGRAPH OF SECTIONS OF CARDIAC MUSCLES UNDER LIGHT-MICROSCOPE OF RATS TREATED WITH EITHER DISTILLED WATER. (A) showed regular cross-striations, DOX (15 mg/kg/day for one days (B) showed necrotic myocytes,  GA treated animals (10 g/Kg/day for 4weeks) prior DOX administration(C) and the animals treated with GA only(D). H&E stained slides with 40 Xmagnification.

DISCUSSION: Doxorubicin (DOX), an anthracyclin antibiotic, is used primarily in the treatment of a variety of solid tumors including hemopoietic malignancies in children and adults; however, its use has been limited primarily due to cardiotoxicity after an acute dose as well as cumulative doses. The DOX-induced cardiotoxicity has been shown to be mediated through different mechanisms including: free radical generation, membrane lipid peroxidation, mitochondrial damage and iron-dependent oxidative damage to macromolecules 19.

Experimental studies in animals using DOX aid in the understanding of the drug´s unfavorable cardiac toxicities, and several therapeutic stratifies have been evaluated to counter the adverse effects which aim to limit free radicals mediated cardiac injury. Myocardial markers enzymes: ALT, AST, CK and LDH serve as sensitive indices to assess the extent of cardiotoxicity due to DOX 20.

In all recent organ protective studies of GA, the mechanism of protection was based on that GA has strong antioxidant properties and a major mechanism for the induction of these toxicities is the generation of free radicals 21, 14.

Results of the present study indicate that the high dose administration of DOX increased the serum enzyme content of these marker enzymes. This increase in enzymes in serum may be due to an increase in their release following DOX induced lipid peroxidation of cardiac membranes. It has been reported that as a result of lipid peroxidation, inflammation cells accumulate in cardiac myocytes 20.

Compared to rats treated with DOX only, rats pretreated with GA restored these levels enzymes indicating ameliorative effect of GA on myocardium. In GA pretreated rats, there was restoration of the levels of these enzymes.

This biochemical analysis showed cardioprotective effect of GA and it is supported by histopathological examinations in which DOX showed confluent necrosis and separation of muscle fibers. This type of myocardial damage including myofibrillar degeneration, mitochondrial dilatation and cellular vacuolization is specific to DOX. These legions were significantly reduced in GA treated rats prior doxorubicin administration.

This effect of GA could be due to its ability to scavenge free radicals thus acting as an antioxidant but it is difficult to explain this protective effect depending on this assumption because another study was found that GA has no antioxidant effect3so that more studies are needed to explain the cardioprotective of GA.

Lecturer of Toxicology in department of Pharmacology and Toxicology, faculty of Pharmacy, University of Benghazi, Benghazi, Libya