Sarsaparilla is a natural herb that has been used by many individuals in connection with liver disease and syphilis. However, it is most commonly used in connection with eczema, psoriasis, and other skin disorders. Sarsaparilla contains steroidal saponins, such as sarsasapogenin, which some researcher claim can duplicate the action of some human hormones1, 2.

It is common to find capsules containing powdered sarsaparilla root. The root of the sarsaparilla plant is considered by European physicians to be an alterative tonic, blood purifier, diuretic (increases urine output) and diaphoretic (increases perspiration).  Sarsaparilla is a rich source of iodine3.

An iodine deficiency will affect your ability to lose weight and cause you to gain weight.  Iodine or iodide is the main precursors required for our thyroid gland to produce thyroid hormones which regulate our metabolism and other hormone systems of the body.  The 2 main thyroid hormones are: triiodothyronine (T3) and thyroxine (T4).  T3 and T4 regulate the rate your body burns calories for energy.

Beet Root is a wonderful cleansing and nourishing tonic that builds the blood, particularly improving the blood quality for menstruating women. It also normalizes the blood's pH balance (reducing acidity) and purifies the blood by flushing away fatty deposits and improving circulation. Beets are a strong diuretic that focuses on the liver and kidneys. Beets flush out floating    body fats. They have a special iron that cleanses the corpuscles; corpuscles are blood cells that can contain fat deposits. It also contains chlorine that also helps to flush out fatty deposits. This chlorine stimulates the lymph which will clear out the fat deposits.

Pumpkin, Cucurbita ficifolia, seed oil was extracted with supercritical carbon dioxide (SC-CO2) in the temperature range of 308–318 K and in the pressure range of 18–20 MPa. In addition, the influence of the superficial velocity within a tubular extractor was studied. The oil content determined by a Soxhlet apparatus was 43.5%. Physical and chemical characteristics of the oil were obtained. The results in terms of free fatty acids contents were compared with those obtained when n-hexane was used as the solvent and no significant differences between the oils extracted by both methods were found4.

Manganese is an essential trace mineral. Human body contain about 12 to 20 mg. of manganese, which is concentrated in the liver, kidney, pancreas, skin, muscles and bones.Manganese is needed for bone development and maintenance of strong bones. It is also important in the utilization of thiamine, helps to activate enzymes that are necessary for the body's proper use of biotin, B1 and vitamin C.

Other Function of Manganese in the body:

Extract “A”: A continuous counter-current diffusion apparatus was used for the extraction of betalaines from red beets. The apparatus was used with an incline of 4.0° and 4.5° and was operated at temperatures from 70-74°C. The efficiency of water and of citric acid solutions (0.050-0.125%) to extract betalaines was investigated. The solvent to sliced beet ratios were approximately 1.5/1. Best recoveries of about 71% betanine were found in the more acid systems at 4.5° incline angle. The betacyanine/betaxanthine ratio could be varied and was influenced by temperature and pH of the various processing operations used to produce beet juice powders i.e. diffusion-extraction, concentration and spray drying5.

Extract “B”: To assure optimal extraction of Sarsaparilla's bioactive compounds, the roots are hand-dug and carefully sun-dried, and are then air-expressed directly to our laboratory and thoroughly extracted with ethanol. Herb Pharm's Sarsaparilla is never fumigated or irradiated.

Extract “C”: A wet burning of the plant samples was carried out and a mixture of sulfuric and nitric acids was used for the oxidation of the organic substance. A portion of 2 g of air-dry plant material was placed into a Kjeldahl flask and moistened with 4 ml of distilled water, and then 5 ml of conc. sulfuric acid and 10 ml of conc. nitric acid was added. The flask was slightly heated to avoid splashing of the solution, decomposition and fuming away of nitric acid. When all the organic material was oxidized, the solution was heated at a higher temperature for 10 min6.

The aliquot parts of this solution were taken for analysis.In a 100 ml separatory funnel were introduced, 0.3 ml hydrochloric acid 1.2 M, 0.4 ml Crystal Violet 1 × 10–3 M, and the aliquots of the prepared solution of a plant sample. It was diluted to a volume of the aqueous phase of 10 ml with distilled water and extracted with 3 ml of 1, 2-dichloroethane for 30 s. The organic phase was filtered through a dry paper into a 1 cm cuvette, and the absorbance was measured at 250 nm. A blank was run in parallel in the absence of a plant sample. A calibration graph was constructed with similarly treated standards as shown in fig. 1. 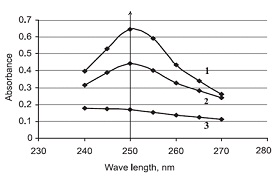 Toxicity: The toxicity study of beet root was not so needed as its having negligible toxicity in human body but the toxicity study over the (drug extract- B) sarsaparilla (Smilax regelii) root extract and Pumpkin seed (drug extract-C) Cucurbita maxima. and also to the combinatory application of extract A&B&C is need to be evaluate in 15 mices such that 5 mice to each extract . Thus LD50 was been evaluated as with the g/kg/day from all the three extract A; B; A&B&C. And at last the mean values of concentrations were estimated for the entire three extracts table-A and its graphically represented in Fig-1.

Affectivity: Affectivity was evaluated to the extracts of Beet, Sarsaparilla, Pumpkin seed and its combination which gives 500 mg, 250 mg, 150 and 500 mg /kg/day, after administered orally.Effectiveness was judged into 5 Guinea pigs 910, 912, 908, 907 and 911 gram body weights were previously given high fatty vegetables only, so that the body weight gets developed to above grams. Then the Beet extract A was given orally in capsule of about 500 mg and the variation in weight was checked after 1 week. Similarly, after 1 week capsule of 250 mg of Sarsaparilla root extract B was administered and weight was evaluated. Similarly with 150 mg of extract of Pumpkin seed C was used to evaluated the change in weight. Then, the combination of  B and  C was tested and the combination of B and A was given, and at last the combination of A & B & C was also administered all with the break of period about 1 week to check the weight variation. After that mean and SD is been estimated and statistically calculate with t-test, P value evaluation. These was done Graph Pad Quick calcs software (online calculator).

Table-1:  Represents the toxicity studies of the extracts and its combination 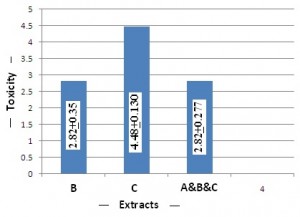 Figure A: shows the toxicity scale of the three extracts – B, C and A&B&C

This study was carried out to determine the possible acute and sub acute toxicity effect of the hydro-alcohol extract from seeds of Cucurbita maxima. after oral administration to mice and to identify the target organs of its possible toxic effects. The results showed that its average lethal dose (DL50) is higher than 5000 mg/kg and subacute treatment shows increases in body weight. The levels of serum alkaline phosphatase, alanine aminotransferase (ALT), and aspartate aminotransferase (AST) and the hematological parameters did not show any alterations. The results suggest that the hydroalcoholic extract from C. maxima. seeds, at a dose of 5000 mg/kg, presents a considerable safety margin, being devoid of acute toxicity7.

Acute and chronic toxicity studies were also undertaken to determine the safety of prolonged use of sarsaparilla. Acute administration of sarsaparilla extract in the dose range of 0.5 to 3.0 g/kg did not produce any adverse effects or mortality in mice over a period of 24 hours. Animals treated with sarsaparilla extract (100 mg/kg/ day) for a period of 90 days in drinking water showed no symptoms of toxicity. There was no significant change in body weight and hematological parameters in the chronically treated animals as compared to the control group. These findings suggest that sarsaparilla, besides having hepatoprotective potential, has no untoward effects in rodents8.

Here we can notice from the table -2 that the difference of mean weight of the A&B&C extracts is much more then in B&C and B&A from the control weight of guinea pigs. From the Figure-B we could know neither the C extract alone shows much difference in mean weight from control nor the admixture of B & C performs any variation in weight difference comparatively. This means the C extracts (Pumpkin seed) is not effective alone to reduce fats, also its combination with B (Sarsaparilla) is less effective.

Table-2: Represents the variation of weight of Guinea pigs after giving extract in different ratio.

The “P value” of C with control is 0.095 (difference is consider not so statistically significant); t-test is 1.88.

The “P value” of A&B&C with control is 0.0004 (difference is considered extremely statistically significant); t-test is 5.902. 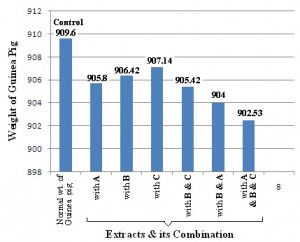 Figure- B: Represents the graphical structure of the histograms of means from table-2.

After administration of all the three extracts individually as well as in the combination to evaluate the weight variation from the control Guinea pig represents the P value of C; B&C; and A&B&C with control is 0.095 (difference is consider not so statistically significant); 0.0124 (difference is considered statistically significant); and 0.0004 (difference is considered extremely statistically significant) respectively. And t-test is 1.88; 3.209; & 5.902 respectively to above.Cucurbita maxima. seed sample reach of manganese having tendency to produce thyroxine get potentiate with Smilax regelii extract sample iodine reach, produce thyroxine to regulate fat in body, is additionally benifited with Beta vulgaris which flush out fat from tissue and blood corpuscle . Thus it’s concluded that A&B&C are more effective in compare to B&C and C for fat reduction in guinea pigs.