ABSTRACT: The purpose of the study was to determine the compatibility of Diacerein (DCN) with various pharmaceutical excipients used in the formulation of ultra-deformable vesicles by using the thermo-analytical technique, Fourier Transform Infrared Spectroscopy-Attenuated Total Reflectance (FTIR-ATR). Assessment of possible incompatibility between the drug and different excipients is an important parameter of preformulation studies. Diacerein was approved by FDA in 2008 for the treatment of osteoarthritis due to its inhibitory effect on pro-inflammatory cytokine including IL-6 and IL-1β. FTIR study of mentioned physical mixtures did not show any evidence of interaction in their solid state. Based on these results, all the excipients were found to be compatible with DCN as no new peak was observed spectra so that they can be further used in the formulation of transfersomal vesicles. FTIR spectra of transfersomal formulation showed a significant reduction in the intensity of peaks, which indicates the formation of vesicles. Moreover, all major peaks of DCN were found to be smooth indicating a strong physical interaction between drug, lipid, and surfactant which leads to certain changes in the physical properties of a drug such as solubility.

INTRODUCTION: In any research work, FTIR plays a crucial role to determine any kind of interaction between pharmaceutical active as well as inactive ingredients. This preformulation phase is necessary for the development of any new product, as it affects chemical nature, bioavailability, stability, which ultimately affects their therapeutic effectiveness and safety 1. FTIR-ATR is a well-established standard method used to study drug release in the semisolid formulation, drug penetration, the influence of penetration modifiers and in-vivo studies.

It is a quick and non-destructive sampling technique for obtaining the IR spectrum of a material’s surface. It is not time-consuming, as samples examined by this technique generally requires minimum or no sample preparation. In pharmaceutical science, the FTIR-ATR technique can be employed to 2, 3.

Diacerein (DCN) is a potent anti-inflammatory agent also known as diacetylrhein which is an anthraquinone derivative 4. As DCN have poor physicochemical properties such as solubility <0.01 mg ml-1 and belongs to BCS- class II drugs with a low oral bioavailability of 35-56%, due to this its oral delivery is not able to get a great success 5. Osteoarthritis is considered as the main cause of chronic disability in the USA, which affects its 12% population and also considered as the fourth leading cause of disability 6. 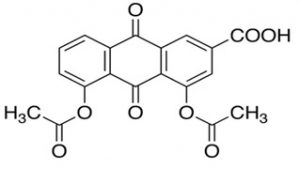 It acts by inhibiting IL-1β, which is the main cytokine produced during inflammation in osteoarthritis. The drug was synthesized in 1980 and marketed as a tablet from 1994 in some European Union and Asian countries 7. It has now been shown to have protective effects against subchondral bone remodeling 8. DCN has been suggested to have disease-modifying properties and functions as a slow acting drug in osteoarthritis by exhibiting anti-inflammatory, anti-catabolic and pro-anabolic properties on cartilage and synovial membrane 9. The effect of DCN become apparent within 2-4 weeks after the start of treatment, achieving a significant level at 4-6 weeks and persist for several months after cessation 10.

Preparation of Physical Mixtures: Physical mixtures (PMs) of drug and selected non-ionic/ anionic surfactants were prepared by mixing equimolar amounts of drug, cholesterol, and surfactants in a glass mortar. Mixing was continued by using pestle for about 10 min until homogeneity was achieved. The resultant PMs were designated as PM1, PM2, PM3, PM4, PM5 and PM6 12.

Preparation of Transfersomal Preparation: DCN loaded transfersomes (DTFs) were prepared using thin layer rotary evaporation method. Briefly, lipid, drug, cholesterol and edge activator were dissolved in RBF containing a mixture of chloroform and ethanol (2:1, by volume). The organic solvent mixture was evaporated by a rotary evaporator (IKA®) under reduced pressure at 40 ºC. The RBF was kept for 2-3 h to remove remaining traces of solvent. The lipid layer gets deposited inside the flask and was allowed to hydrate for 1 h in a citrate buffer (pH 6.0). The suspended vesicles were further allowed to swell for 2-3 h at room temperature, which resulted in large multi-lamellar vesicles. These were sonicated for 1-2 min by using probe sonicator for size reduction. These multi-lamellar vesicles were passed through 200 nm pore size polycarbonate membranes (Titan3™), to obtain final drug-loaded transferosomal vesicles of the desired size. These vesicles were then stored under refrigeration (2-8 °C) for further charac­terization 13.

FTIR Spectroscopic Study by ATR Method: ATR-FTIR measurements, in the range 4000-200 cm−1, with 4 cm-1 nominal resolution with mathematical corrections yielding a 0.8 cm−1 actual resolution of spectral resolution, were recorded using an Attenuated Total Reflectance (Smart Orbit, Thermo Scientific, Waltham, MA, the USA). The samples were pressed into the diamond crystal of ATR with a standardized pressure using a manometer, and for each spectrum, 100 measurements were averaged. FTIR spectrometer was fitted with a deuterated triglycine sulfate (DTGS) detector (Thermo Scientific). The Thermo Scientific system was controlled with OMNIC 8.1 software (Thermo Scientific) 14.

RESULTS AND DISCUSSION: FTIR is the most applied technique in the chemical and pharmaceutical sciences. Its scope includes many applications especially to find out the compatibility between active and inactive pharmaceutical ingredients which is prerequisite for the designing of the drug formulation. The FTIR spectra of individual components, physical mixtures, and transfersomal formulations were recorded and interpreted to find out any interaction. This work was aimed to point out presence or absence of any possible incompatibility of selected surfactants with DCN.

FTIR Spectra of Excipients: DTFs were prepared by thin layer rotary evaporation method using phospholipon-90G (PL-90G) and soya lecithin (SL) as vesicle-forming lipids. Span 80 (Sp-80), sodium cholate (SC) and sodium deoxycholate (SDC) were used as edge activators to enhance the penetrability of vesicles through the skin. In all formulations, cholesterol was added to enhance the stability and entrapment efficiency of drug present in unilamellar or multilamellar vesicles 15. Functional groups present in all excipients are explained in Table 1, while the FTIR spectra are shown in Fig. 2. 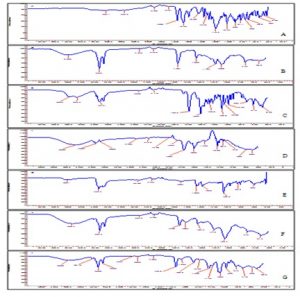 FTIR Spectra of Physical Mixtures (PMs): PMs of DCN with selected excipients were prepared by simple mixing in equimolar ratios (1:1) and were scanned. Functional groups present in all PMs are explained in Table 2, while the FTIR spectra are shown in Fig. 3. The findings of the present study revealed that DCN showed similar peaks in spectra of PMs as in the spectrum of DCN. All the principle peaks of the pure drug were found to in spectra which indicate no chemical interaction between active moiety and excipients used in the transfersomal formulations. 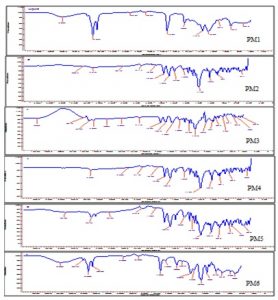 FTIR Spectrum of Transfersomal Formulation: FTIR spectrum of transfersomal formulations showed the remarkable attenuation of IR bands of drug and surfactants with a significant reduction in the intensity of peaks. 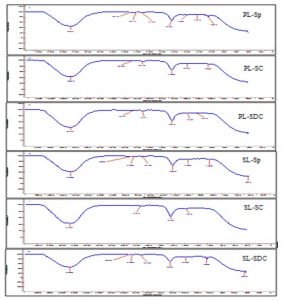 All principal peaks of DCN were found to be diffused indicating the formation of vesicles with both lipids. Moreover, all major peaks of DCN were found to be smooth, indicating a strong physical interaction between drug, lipid, and surfactants. FTIR spectra of formulation showed the presence of characteristic peaks due to the presence of other excipients which can be seen from Table 4. Hence, FTIR spectra indicate no chemical interaction between drug and excipients.

CONCLUSION: ATR-FTIR analysis was successfully employed for the identification of various functional groups present in the individual components, physical mixtures, and the trans-fersomal formulations. The study eventually culminated with the absence of chemical interactions between drug, lipids and various edge activators. FTIR spectra of vesicular formulation showed the absence or smoothing of principal peaks of pure drug. Therefore, it was concluded that DCN was successfully encapsulated into the transfersomal carriers and was available for its pharmacological action.

CONFLICT OF INTEREST: The authors have no conflicts of interest.