Familial cancers, which are in general incapable of exhibiting symptoms at the early onset period of the disease, can become fatal if left undiagnosed. Such cancers turn out to be a great threat through many generations in the long run. The remedial alternative to this is treatment   at the genetic level which quite obviously points out to gene therapy. In this work, gene therapy proposed at the pre-transcriptional level intends to silence mutation of the target gene, thereby inhibiting or silencing gene expression in the form of a defective protein. Skin cancer, the second most common type of cancers widespread across the globe, has been considered for our studies. Phytochemicals that have been reported to have anti-skin cancer properties (at the protein level - acting on the defective protein targets), have been further investigated for antimutagenic activity at the gene level (intended to act on gene targets). Lutein and crocetin have been reported to show antimutagenic behavior towards the skin cancer genes considered in the analysis. Considering the drug-likeness of these two molecules, it has been found that the water solubility of lutein and the bioavailability of both lutein and crocetin need to be improved to make them into effective drugs in gene therapy.

INTRODUCTION: Skin cancer is the second most common type of cancers that has become a matter of great medical concern today. Especially, women are at a higher risk to skin cancer, which ranks second next to breast cancer 1. Skin cancer is the most prevalent form of cancer in adolescents and young adults of the age group 15-29. Each and every type of cancer will definitely have a genetic component 2. A small but considerable percentage of risk factors include genetic mutations3. These mutations become inherited factors that would pass over to succeeding generations, eventually leading to ‘inherited’ cancer otherwise called ‘familial’ cancer 3. Such cases of inherited cancers fail to reveal symptoms at an early stage.

Diagnosis at a later stage makes the treatment process tedious and many a times unsuccessful. Patients at such a late stage become resistant to conventional treatments. This is where gene therapy finds its significance. Almost two-thirds of all gene therapy research contributes to cancer therapy. Recently, a large number phase I and phase II clinical trials are in progress for skin cancer. This work emphasizes on gene silencing at the pre-transcriptional level. The two most prevalent techniques are the transcriptional and post transcriptional gene silencing, where transcription and translation processes of the gene respectively, are inhibited 4.

Our research work proposes to introduce a molecule that would inhibit the mutation of the gene, thereby preventing or silencing the expression of an abnormal gene.

Mechanism of Gene Silencing: Conventional gene silencing methods intend to silence expression of a particular gene that has undergone a mutation 5, whereas here, in pre-transcriptional gene silencing, the mutation in itself is turned OFF or silenced. Basically, mutation is an optimization event that takes place due to a lack of stability in the structure concerned. A less stable structure takes up a more stable structure through the process of mutation. The mutation process can be prevented by enhancing the initial stability. Then, the chances of this structure to demand better stability are reduced. Eventually this further reduces the probability of the gene mutation. The stability of a system or structure can be increased by allowing it to form bonds with another system or structure.

This work proposes the use of such a molecule that would bind to an intended gene sequence and prevent its mutation. The proposed anti-mutagenic molecule would bind to the mutation prone codon regions of the gene and give them the required additional stability. Here, the anti-mutagenic analysis of phytochemicals in pre-transcriptional gene silencing of skin cancer has been carried out. This has been done by carrying out interactional studies of these phytochemicals with the gene codons.

Docking techniques have been used for the purpose. For a molecule to act as a drug, it should exhibit a required level of solubility in water and bioavailability. Drugs with very low water solubility tend to have the problem of poor elimination and drugs with poor bioavailability may result in poor absorption, high rate of metabolism and high rate of elimination. These problems would eventually lead to poor drug likeness of the compound. For a compound to act as an optimal drug, it should have a ‘log Sw’ value (Where Sw is the water solubility in mg/ml) in the range -2 to 0 and an oral bioavailability greater than 70%.

Computational Methodology: A list of phytomedicines reported to exhibit anti-skin cancer properties (at the protein level) have been considered for the analysis. The list includes phytochemicals such as α-Carotene, Crocetin, Chlorogenic Acid, Lutein, Quercetin, Ferulic Acid, Solasodine, Resveratrol and so on 6-12. The analyses were made by carrying out interactional studies of all the above mentioned phytochemicals with the pre-mutated and mutated codons of the nine genes DDB2, EGFR, ERCC2, FGFR4, IGF1R, SOD2, TP53, XRCC1, XRCC3 which are associated with skin cancer. The molecule which has the ability to act as the anti-mutagen would interact better with the pre-mutated codons compared to the mutated ones. The codon sequences corresponding to each of these genes have been collected from the human genome mutation repository, ‘Human Gene Mutation Database’ (HGMD) 13. The structures of these gene sequences (pre-mutated and mutated) have been computationally modeled using Hyperchem. Similarly, the structures of the various phytochemicals have been modeled using GaussView 14.

Docking studies were performed using CDOCKER tool of Accelry’s Discovery Studio 15, which is protocol that uses a combination of molecular dynamics simulation and docking. This is what makes CDOCKER different from other conventional docking methods, where the ligand and target lack flexibility. Together with molecular dynamics simulation, this problem of rigidity is eliminated and both the ligand and target can be treated in a flexible manner.

All the ligand molecules were then subjected to ADMETox (Absorption, Distribution, Metabolism, Excretion and Toxicity) studies with the help of ADME/ToxWEB tool 16. From this, information regarding solubility, bioavailability and eventually the drug-likeness of these ligands have been obtained.

RESULTS: Of the various phytochemicals considered, Lutein (Fig. 1) and Crocetin (Fig. 2) were the ones that showed the required levels of interaction with the codons of most of the genes in the list. The interaction levels were judged based on the interactional energy values. Lower the interactional energy, higher is the level of interaction. Lutein was found to show positive results for 5 (EGFR, ERCC2, FGFR4, TP53, XRCC3) out of the 9 genes and Crocetin with 5 (EGFR, ERCC2, FGFR4, XRCC1, XRCC3) out of the 9 genes. These two phytochemicals interacted better with the pre-mutated codon sequences of the corresponding genes compared to the mutated codon sequences. The average interaction energies of Lutein and Crocetin with the codon sequences of the corresponding genes have been tabulated (Tables 1 & 2). 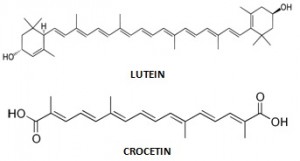 FIG. 1: STRUCTURE OF THE PHYTOCHEMICALS LUTEIN AND CROCETIN THAT SHOWED THE REQUIRED LEVELS OF INTERACTION WITH THE CODONS OF MOST OF THE GENES IN THE LIST

The remaining set of phytochemicals reported a few or no interaction with the gene codons. For example, Chlorogenic acid and Resveratrol reported the required behavior with only 1 or 2 out of the 9 genes, Querecetin and Solasodine reported zero interaction with all the genes and so on.

From the ADMETox studies, various parameters like level and rate of absorption, bioavailability, volume of distribution, structural properties, solubility, etc. have been computed. The results have been tabulated (Table 3).

The bioavailability of both these compounds needs to be improved in order for them to act as the anti-mutagenic drug. As far as solubility is concerned, Crocetin satisfies our requirement. But the water solubility of Lutein has to be enhanced. In addition to this, considering the interactional factor, Lutein with a lower average interactional energy (-24.3394 kcal/mol) interacts better with the pre-mutated gene codons compared to that of Crocetin (-16.9438 k.cal/mol).

ACKNOWLEDGEMENTS: The authors express their gratitude and support rendered by the University authorities of Pondicherry University and AMRITA Vishwa Vidyapeetham University.