ABSTRACT: Low level of oxygen in tissues leads to hypoxia, and hypoxia-inducible factors (HIF) regulate the hypoxic and normoxic conditions in various tissues. During normoxia, HIF-1α binds to von Hippel-Lindau E3 ubiquitin ligase complex that targets HIF-1α to the ubiquitin-proteasome pathway for proteolytic destruction. But in hypoxia, HIF-1α move to the nucleus where it binds to CBP/p300 at CH1 domain. By considering this fact, the present study was conducted to search a suitable inhibitor that can bind to HIF-1α. The unliganded HIF-1α was docked and the best five docking solutions complex were selected and analyzed by Ligplot. The analysis showed that catechin, epicatechin, myricetin, dicarnoxide D, and pycnidione had the maximum potential to inhibit HIF-1α protein and may prove to be potential inhibitor for counterfeiting hypoxic conditions.

INTRODUCTION: Hypoxia acts on the vasculature directly conveying its damaging effects through disruption of the control of vascular tone, particularly in the coronary circulation, enhancement of inflammatory responses and activation of coagulation pathways. These effects could be particularly detrimental under pathological conditions such as obstructive sleep apnea and other breathing disorders 1. Transcription factor, hypoxia-inducible factor-1α (HIF-1α), mediates the pathophysiological response caused due to hypoxia. HIF-1α is a heterodimeric protein, consist of α and β-subunits 2. HIF-1α acts as a master regulator which induces the synthesis of proteins that promote metabolic changes in the cells of hypoxic tissues and controls angiogenesis, erythro-poiesis, and glycolysis via transcriptional activation of target genes under hypoxic conditions 3.

In normoxic conditions, the HIF-1α is unstable and binds to the von Hippel-Lindau E3 ubiquitin ligase complex that targets HIF-1α to the ubiquitin-proteasome pathway for proteolytic destruction. Also HIF-1α does not interact with p300 in normoxic conditions instead oxygen-dependent process occurs in which hydroxylation of Asn803 4, located within the C-TAD of HIF-1α takes place and prevent the interaction of HIF-1α with the CH1 domain of p300. However, in hypoxia condition the degradation rate of HIF-α protein is decreased so it travels to the nucleus; and dimerizes with HIF-β where it performs the protein-protein interaction with transcriptional co-activators such as the CH1 domain of p300 5. HIF-1α dimer/p300 complex binds to hypoxic response elements (HRE) on DNA and causes a plethora of downstream events via transcription mediation 6.

In the present work, various molecules have been studied which may have the potential to prevent protein-protein interaction between HIF1α/p300 at CH1 domain with the HIF-α CAD by using computer-aided drug designing. Appropriate set of ligands were taken from Pubchem database, the protein-ligand interactions were studied and the lead molecule was selected on the basis of number of hydrogen bonds, binding affinity, inhibition constant, and validated by absorption, distribution, metabolism, and excretion (ADMET) studies.

Binding Site Prediction: The protein structure of HIF-1α (PDB ID - 1H2K) was retrieved from RCSB Protein Data Bank 7 (PDB) in Brookhaven’s PDB format, and protein cleaning (removal of ligand and water molecules) was done using Autodock 4.2.6. 8 Binding sites of HIF-1α were predicted by using the software CASTp 9. It is used to identify and measure the binding sites, active sites, surface structural pockets (accessible), interior cavities (inaccessible), shape (alpha complex and triangulation), area, and volume (solvent and molecular accessible surface) of each pocket and cavities of proteins. Docking of selected compounds was performed on a particular site of protein sequence from 786 to 826 10. 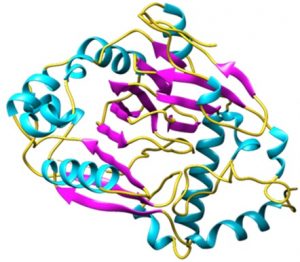 Compounds Selection and Preparation: According to the Lipinski rule of five several natural derivative compounds were filtered from the PubChem Database 11 and then screened 75 compounds against the HIF-1α protein. The structure of ligand was collected from PubChem (http://pubchem.ncbi.nlm.nih.gov) database. The ligands were retrieved in SDF format from the database and then converted to PDB format by using Open Babel GUI 12. Ligands were prepared by the addition of hydrogen atoms, removal of the charge groups, and removal of other structures of the ligands with Autodock 4.2.6. Optimized structures of ligand and protein were ultimately used for molecular docking.

Molecular Docking: Virtual screening of the ligand-protein interaction for their binding affinity was carried out using AutoDock 4.2.6. Protein sequence from 786 to 826 was selected for docking. Input files were prepared by adding polar hydrogen, Kolloman charges and setting up the grid map. Rigid docking was performed using a Lamarckian Genetic Algorithm 13, and the runs were increased from 10 to 100 in order to search out the most preferred orientation of the ligand to the receptor, having the lowest binding energy. Finally, H-bonding and hydrophobic interactions were analyzed using Ligplot 1.4.5 14, a program used to generate schematic diagrams of protein-ligand interactions. A small database of 75 compounds were formed on the basis of past findings, as showed in Table 1.

Molecular Docking Analysis: After the docking of listed compounds Table 1 only 11 were selected for the inhibition as showed in Table 2 and further 5 compounds were selected on the basis of number of hydrogen bond, maximum negative binding affinity, and maximum inhibition constant as shown in Table 3.

Ligplot shows hydrogen bonds between catechin, epicatechin, myricetin, dicarnoxide D & pycnidione with the amino acids that were present in the targeted site as showed in Fig. 2. After 100 run catechin and epicatechin bind with five amino acids of targeted active site of protein structure and it’s indicated by dark color in Table 3. 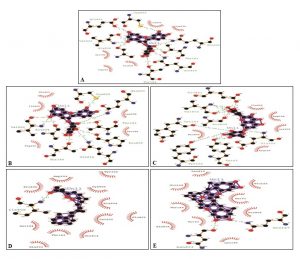 FIG. 2: LIGPLOT SHOWS THE INTERACTION OF CATECHIN (A), EPICATECHIN (B), MYRICETIN (C), DICARNOXIDED (D) AND PYCNIDIONE (E) WITH THE HIF-1α  PROTEIN

ADMET Analysis: The results obtained from the ADMET server showed in Table 4 and 5. Compounds like catechin, epicatechin, myricetin, showed inability to cross CNS while dicarnoxide D, pycnidione were able to cross CNS. HIA+ value means all compounds will be easily absorbed by the human intestine.

Analysis of toxicity properties showed that compounds were non-carcinogenic and non-AMES toxic. Acute oral toxicity shows III, IV phase of oral toxicity means small values (between 300 to 2000 mg/kg) of compounds will be not toxic for humans. 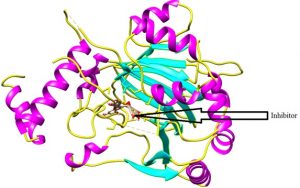 CONCLUSION: The docking of protein with a ligand is a significant method in structural biology for searching a potential inhibitor. The goal of docking software is to predict the predominant binding mode (s) of a ligand with a protein of known 3-D structures. Screening studies of these 75 ligands obtained from Pubchem database were docked against HIF-1α on binding site of CBP/p300 using Autodock 4.2.6. The present study concludes that the catechin, epicatechin, myricetin, dicarnoxide D, pycnidione were found to be active against HIF-1α protein as showed in Table 3 and catechin, epicatechin may be used as an inhibitor for preventing hypoxic condition in human because both compounds bind with the maximum number of amino acids of an interesting site Fig. 3 and may be restricted binding of CBP/p300 on HIF-1α.