The present study undertaken to predict the three dimensional structure of γ-Hexachlorocyclohexane dehydrochlorinase (linA) in Sphingomonas paucimobilis UT26. γ-Hexachlorocyclohexane dehydrochlorinase (linA) catalyzes the initial steps in the biotransformation of the important insecticide γ-hexachlorocyclohexane (γ-HCH) by the soil bacterium Sphingomonas paucimobilisUT26. Stereo chemical analysis of the reaction products formed during conversion of γ-HCH by linA was identified from structural database using homology modeling or comparative modeling approach. Based on the knowledge of the template, a three-dimensional model was predicted and processed in to energy minimization, Ramachandran plot analysis, quality assessment and finally deposited into Protein Model Database.

INTRODUCTION: γ-Hexachlorocyclohexane (γ-HCH; also called γ-BHC and lindane) is a highly halogenated organic insecticide that has been used worldwide. Due to its toxicity and long persistence in soil, most countries have prohibited the use of γ-HCH. However, many contaminated sites remain throughout the world. Moreover, some countries are presently using γ-HCH, mainly for economic reasons, so new sites are continually being contaminated 1.

Sphingomonas (formerly Pseudomonas) paucimobilis UT26 is a unique microorganism that utilizes γ-HCH as its sole source of carbon and energy under aerobic conditions 2. The four genes of Sphingomonas are linA, linB, linC, and linD, the products of which are involved sequentially in the degradation of γ-HCH in UT26 3. Three of them encode different types of dehalogenases: dehydrochlorinase, halidohydrolase, and reductive dehalogenase. Among them, γ-Hexachloro cyclohexane dehydrochlorinase (linA) encodes an enzyme that catalyzes a unique dehydrochlorination reaction whose mechanism is still unknown 4.

In this study, our aim was to derive a model of the tertiary structure of linA by using simple template and a model evaluation through a comparative modeling approach.

Selection of Structural Template: An effort was made to find an appropriate structural homolog or template for the modeling of the γ-Hexachlorocyclohexane dehydrochlorinase (linA). In the beginning, a structural template was obtained from Protein BLAST 5 and Protein Data Bank 6 was used as reference database to identify the closely related sequences.

Target- Template Alignment: The protein sequence of γ-Hexachlorocyclohexane dehydrochlorinase (linA) was aligned with the corresponding template by using align-2D module in MODELLER 9V2 7 which required two files: a file containing target sequence in PIR format and an another file containing structural coordinates of template. This step was essential to identify the common conserved residues or active residues present in both the sequences.

Model Building: MODELLER 9V2 was used to envisage the three-dimensional structure of γ-Hexachlorocyclohexane dehydrochlorinase (linA) based on satisfaction of spatial restraints. It is a python script based program used to predict the three dimensional model from single template.

Model Evaluation: Once target-template alignment was completed, a three dimensional structure of γ-Hexachlorocyclohexane dehydrochlorinase (linA) was predicted. Five sets of models were generated by satisfaction of spatial restraints. The restraints include distance and dihedral angles for the backbone and side chains.

The value of DOPE score for five models was -13817.35059, -13817.35059, -13880.77148, -13545.13086, and -13890.94824. The 5th model was selected due to lowest DOPE score value 7. Refined model was subjected to a series of tests for testing its internal stability and reliability. Backbone conformation of the refined model was assessed by the examination of the Psi/Phi Ramachandran plot obtained from RAMPAGE web server 8. Harmony web server 9 was also used which examines the compatibility between the sequence and the structure of a protein by assigning scores to individual residues and their amino acid exchange patterns after considering their local environment.

RESULTS AND DISCUSSION: An evaluation of the refined model involved two independent tests. The first test was to compare the residue backbone conformations in our refined model with the preferred values obtained from Protein Data Bank of known structures. The results of RAMPAGE web serve explored that 98% residues of refined model of γ-Hexachlorocyclohexane dehydrochlorinase (linA) were found to be in the most favoured region of the Ramachandran Plot (see Figure 1 and 2) which is more than the cut-off value of 96.1% in most of the reliable models 8. The stereo chemical quality of the predicted model was found to be acceptable and low percentage of residues having phi/psi angles in the outlier region.

The second test was carried out by using HARMONY web server (http://caps.ncbs.res.in /harmony/) to check the quality of the models that examines the compatibility between the sequence and the structure of a protein by assigning scores to individual residues and their amino acid exchange patterns after considering their local environment 9. Here  misfolds and folds with elaborate regions of errors can be identified by plotting the scores of the query protein structure against a calibration plot. Protein with misfold regions will have significantly low harmony score and fall well below the straight fit line. The result explored from the HARMONY server is shown in figure 3 from which it is clear that the structure is aceeptable. 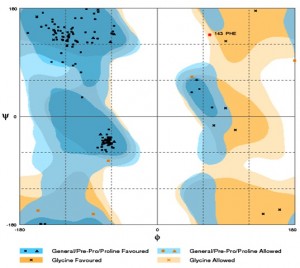 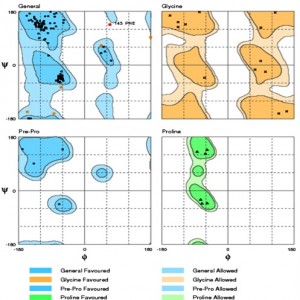 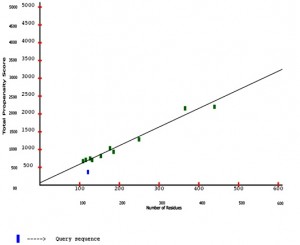 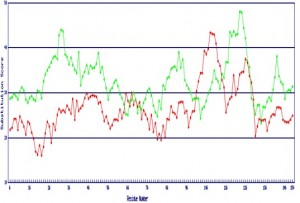 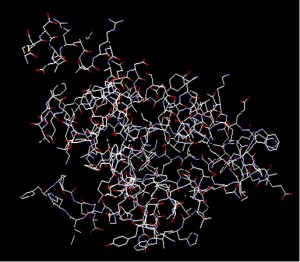