ABSTRACT: Candesartan cilexetil is a novel, potent, and highly selective non-peptide angiotensin II type 1 receptor blocker. It is a hydrophobic drug that belongs to the BCS Class II drug. For enhancement, the bioavailability and quick systemic action of Candesartan cilexetil a novel formulation of buccal (effervescent) tablet, was designed.  Preformulation is an important step in the rational formulation of an active pharmaceutical ingredient (API). Micromeritics properties: Bulk density (du), Tapped density (db), Compressibility Index (% C) and sieve analysis was performed in order to determine the best excipients to be used in the formulation development of Candesartan cilexetil (effervescent) tablets. Results show that Candesartan Cilexetil has a fair flow and compressibility properties (du 0.8 g/mL, db 0.7 g/mL, % C 12.5, and sieve analysis time 4.5 min. HPLC method for estimation of Candesartan cilexetil shows linearity ( R2 = 1) and specific with no interference of excipients. Solubility studies reveal that it soluble at pH 6.8 and 7.5 in phosphate buffer. The ability of a material to absorb water (Hygroscopicity) was found 0.1% after 24 H at 80% Relative Humidity. Melting point range from 161-165 °C. There was no drug excipient interaction observed when analyzed through FTIR and DSC. There was no change in appearance after 15days at 40°C and 75% Relative humidity. These results lead to the better development of Candesartan cilexetil buccal (effervescent) tablet.

INTRODUCTION: Candesartan cilexetil is novel, potent, and highly selective non-peptide angiotensin II type 1 receptor blocker 1. Its chemical name is (±) - 1-(cyclohexyloxy)carbonyloxyethyl-2-ethoxy-1-2'-(1Htetrazol-5-yl) 1, 1' biphenyl-4-ylmethyl-1Hbenzimidazole-7-Carboxylate as shown in Fig. 1 and molecular mass is 610.66 g/mol. Its ionization constant is about 6.0, and LogP value is 4.79 2, 3.

It is mainly used in the treatment of hypertension. When it is administered orally, it is completely hydrolyzed from candesartan cilexetil to cande-sartan, an active moiety. It is a hydrophobic drug that belongs to the BCS Class II drug. Its Oral bioavailability is 15-40%; hence it is poorly absorbing from GIT. 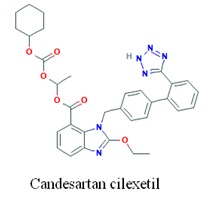 All weighing was done on Sartorius's analytical balance. Thermo Lab made a hot air oven used in the study. The ultrasonic bath of Labman was used. FTIR and DSC were used to Shimadzu Make. Thermo lab-made walk-in stability chamber was used for the study.

Micromeritics Properties of API: Bulk properties for the solid forms such as particle size, bulk density, and surface morphology are also likely to change during process development.

Bulk Density (DU): An accurately weighed sample of granulation was carefully added to the measuring cylinder with the aid of a funnel. Then the volume was noted. The volume of the packing was determined in an apparatus consisting of a graduated cylinder mounted on a mechanical tapping device. Apparent bulk density was determined by the following formula:-

Tapped Bulk Density: (DB): The above procedure was followed. The final volume was tapped till no further reduction in volume was noted. Packed bulk density was determined by the following formula.

Percent Compressibility (%C): It is an important measure that can be obtained from bulk density measurements. The following formula was used to compute the percent compressibility.

Quantitative Assay Method: For linearity of the method, the standard solution was prepared in range 0.5, 1, 3, 5, and 7 mg/mL. Diluent was used as a blank for the specificity of the method.

Hygroscopicity: Hygroscopicity is the measure-ment of a material's ability to absorb or release water as a function of humidity (ie water activity). The ideal way of measuring Hygroscopicity would be to create a Moisture sorption isotherm by looking at the change in water content vs. relative humidity at a constant temperature.

Compatibility Study: To ensure physical stability, all excipients and active pharmaceutical ingredients were mixed in equal proportion to make a ratio of 1:1, as shown in Table 1. The sample shall be kept in the worst condition in a stability chamber. i.e. Stress testing condition (40 °C /75% RH) for 15 days. The samples were evaluated for physical observation, by FTIR for change in any functional group peak and by DSC for change in the meting point concerning the initial condition.

TABLE 1: PROPORTION OF ALL EXCIPIENTS FOR COMPATIBILITY STUDY

Micromeritics Properties: Result of micromeritics properties were as shown in Table 2. Bulk density and tapped density was found 0.8 and 0.7 gm/mL, respectively. Compressibility was found good that will minimize the step for compression trials, and ultimately it will reflect in the cost of the product. Compressibility helps in the selection and determi-nation of the optimal excipients and amount of excipients to be used.

Quantitative Assay Method: The method was found specific, as shown in Fig. 2 as there was no interference at the interested retention time of candesartan cilexetil. The linearity of the method shows an R2 value of 1.0 that indicates the method follows Beer-Lambert's law, as shown in Fig. 3, 4, and area response in Table 3. 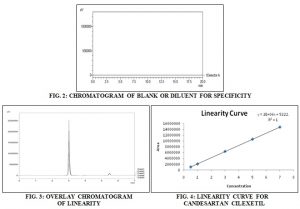 Solubility Study by Shake Flask Method: Solubility of Candesartan cilexetil in different media was found as shown in Table 4.

Solubility data helps to predict the dissolution media condition, selection of mobile phase, and diluent for development of the chromatographic method, possible interaction, and stability of the API in particular media.

From the table, it can be said that at lower pH, the API remains insoluble, and its solubility increase as an increase in the pH of media. At pH 6.8 and pH 7.5, the API was found soluble.

Hygroscopicity: The ability of Candesartan cilexetil to absorb moisture was less than 0.1% when it was exposed to 80% Relative Humidity for 24 H. This indicates that the material was non-hygroscopic in nature.

Non-hygroscopic nature will not degrade in higher moisture conditions, but it will also retard the solubility of material.

So, to increase the solubility and thus to make material hygroscopic, the buffering system needs to be develop surrounding the molecule by the concept of effervescent.

Compatibility Study: The results of the compatibility study are summarized in Table 5. There was no interaction found between drug and different excipients even after 15 days at 40 °C and 75% Relative Humidity. FTIR spectra remained the same with no change in any functional group peak, as shown in Fig. 5-6, and Table 6. The endothermic peak in DSC indicates that there was no any impurity generated during the exposure period for drug and excipients, as depicted in Fig. 7-8.

CONCLUSION: Preformulation study has a significant part to play in anticipating formulation problems and identifying the logical path for the development of dosage form. The physical characteristics of candesartan cilexetil comply as per the USP requirement. The study of micromeritics properties revealed that the formulation could be prepared by the direct compression method. The chromatographic method with the R2=1 supports the method for linearity, and the specificity of the method tends to analyze the sample without any interference. Non-hygroscopic nature of drugs will be a single hurdle for formulation development. pH-dependent solubility plays an important role in developing a bioavailable dosage form.

The API soluble at more basic pH can be created by means of effervescence. Results of sold state stability candesartan cilexetil show that it is compatible with Excipients at stressed conditions too.  FTIR and DSC interpretation shows that there is no any reaction between Excipients and drug.

We are heartily thank full to Vovantis laboratories private limited for providing necessary facilities to carry out this research work.