INTRODUCTION: Diabetes mellitus is a major endocrine disorder in which homeostasis of the carbohydrate, protein and lipid metabolism is inappropriately regulated by the pancreatic Hormone, insulin which results in hyperglycemia.1 Chronic hyperglycemia is related with dysfunction and long-term damage, failure of different organs, especially kidneys, eyes, nerves, heart and blood vessels. Symptoms of hyperglycemia include polyuria, weight loss, polydypsia, sometimes with polyphagia and blurred vision

According to WHO, it is estimated that 3% of the world’s population have diabetes and the prevalence is expected to double 6.3% by the year 2025.2 Type 2 diabetes is the commonest form of diabetes represent 90% of the diabetic population caused by impaired secretion of insulin and /or insulin action leads to high postprandial glucose levels and it has increased morbidity and mortality because of its chronic problem.3

Current information suggest that one of the therapeutic approaches for diminishing post-prandial hyperglycemia is to prevent absorption of glucose by the inhibition of carbohydrate-hydrolyzing enzymes, such as alpha-glucosidase and alpha-amylase.4 Currently, there are 5 classes of therapeutic anti-diabetic drugs for treatment of  type 2 diabetes. In that acarbose, miglitol and voglibose reversibly inhibit α- glucosidase enzyme from intestine, pancreas and  produce some gastrointestinal side effects such as abdominal pain, diarrhoea and flatulence in the patients, which is due to the too much inhibition of pancreatic α- amylase resulting in the fermentation of undigested carbohydrates in the colon by colonic flora.5 Therefore, a good approach for treating postprandial hyperglycemia with lesser side effects is to recognize the inhibitors from natural sources, which has mild inhibitory effect against α-amylase enzyme and strong inhibitory activity against α-glucosidase enzyme.6

The leaves, roots and bark of the plant is to possess various therapeutic effects such as depurative, expectorant, jaundice, diuretic, anti-inflammatory, leprosy, diabetes, dropsy and fever8 and some authors reported hepatoprotective,9 DNA protective effect in cultured lymphocytes10 and analgesic11 activity. Previous investigations on the plant Nilgirianthus ciliatus Nees have lead to the isolation of stigmasterol, lupeuol, taraxerol, betulin, 4-acetyl-2,7-dihydroxy-1,4,8-triphenyloctane-3,5-dione and stigmasterol glycoside.12-14 Thorough review of ethnopharmacological, ethanobotanical and modern scientific validation data revealed that not much work has been done on this plant in terms of its bioactivity related to diabetes. Therefore the present study has been designed to prove the phytochemical and therapeutic potential of the plant Nilgirianthus ciliatus Nees. 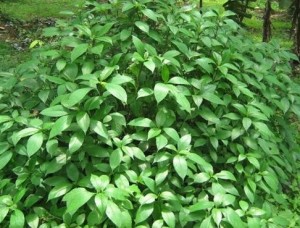 The plant Nilgirianthus ciliatus Nees was collected from Kerala and authenticated by Dr. P. Jayaraman, PARC, Chennai. The collected plant was shade dried and powdered.

The ethanolic extract of plant was prepared by cold maceration method. 1000g of the coarsely powdered plant sample was macerated with ethanol. Ethanol is useful for preventing the microbial growth. The residue was removed by filtration and the ethanolic extract was concentrated under vacuum to get solid yield. The crude extract was stored in refrigerator at 2-8oC for use in subsequent experiment. The extract was reconstituted with ethanol for further analysis.15, 16

Physico chemical standardization: The various physico chemical parameters considered were Loss on drying, Ash values (Total ash, acid insoluble ash, water soluble ash) 17 and extractive values for plant powder were performed according to standard methods. The plant powder and extract of Nilgirianthus ciliatus Nees were treated with various chemical reagents and the color produced was viewed Under day light, near and far UV.18

Crude fiber contents in the sample was determined by acid base digestion method.19,20 In a 500 ml conical flask, 2 g of dried plant powder and 200 ml of 1.25% H2SO4 (7.2 ml of 94% concentrated acid per 1000 ml distilled water) was added to it. The mixture was boiled for 30 minutes with bumping chips. The flask was allowed to cool; after cooling it was filtered via muslin cloth. The filtered residue was washed several times with boiled distilled water. The obtained residue was boiled with 200 ml of 1.25% sodium hydroxide solution (1.25 g of NaOH dissolved in 100 mL distilled water).

The contents were filtered via the muslin cloth to get the residue. This was washed with 25 mL of 1.25% H2SO4, three times with 50 ml of water and finally with 25 ml of alcohol. The residue was collected and transferred into pre-weighed porcelain crucible (W1g).The residue was dried in an oven at 130 ± 2oC for 2 h to get constant weight. The porcelain crucible was cooled in dessicator and weighed (W2). The residue was again ignited at 600 ± 15oC; cooled in dessicator and weighed (W3). The Crude fiber content in the samples was calculated by using following formula

Loss in weight on ignition=

The freshly prepared crude ethanolic extracts was subjected to phytochemical screening for identifying the primary and secondary metabolites such as flavonoids, alkaloids, steroids, phenolic compounds, saponins and tannins present in the plant extract using the standard procedure.21,22

Total phenolic content of the plant extracts was determined using Folin-Ciocalteu method.23 Standard solution of gallic acid was prepared in the concentration ranging from 10 to 50µg/ml. The plant extract solution was prepared at concentration range of 1 mg/ml. A volume of 100 µl of plant extract and standard was mixed with 0.75 ml of Folin-Ciocalteu reagent (diluted previously 10 fold with distilled water). The solution mixture was incubated for 5min at room temperature. Then added 0.75 ml of sodium carbonate (6% w/v) to this mixture and mixed gently. The resulting mixture was again incubated for 90 min at room temperature for color development. The absorbance of total phenolic content was measured at 725 nm using Perkin Elmer Lambda 25 UV/Vis spectrophotometer.

Total flavonoids assay was carried out using the colorimetric method.24 One mg of the plant extract was mixed with 4 ml of distilled water, 3 ml of 5% NaNO2 and incubated for 5 min. After 5 min 0.3 ml of 10% AlCl3 was added and incubated for 6 min.  After the incubation, 2 ml of 1 M NaOH was added. The volume was made up to 10 ml with distilled water. The solution was mixed well and the absorbance of total flavonoids was measured at 510 nm using UV-VIS spectrophotometer.  The result of total flavonoid was expressed as quercetin equivalent.

Flavonols content was determined by the method of Kumaran and Karunakaran(2007).25 Two ml of plant extract (1 mg/ml) was mixed with 2 ml of ethanolic aluminium chloride solution and 3 ml of 5% sodium acetate solution. The mixture was incubated for 2.5 h at 20oC. After the incubation the absorption was measured at 440 nm.

One gram of the dried and powdered test sample was macerated with 10 ml distilled water. To this, 30 ml of chloroform-methanol mixture in the ratio (2: 1, v/v) was added and mixed thoroughly. The mixture was left overnight at room temperature; again 20 ml of chloroform and 20 ml of distilled water was added and centrifuged. Three layers were formed, out of the three layers, a clear lower chloroform layer containing all lipids was collected in pre-weighted beaker, the collected solvent was evaporated completely and weighed, which was taken as the weight of total lipids/g of the dried sample. 26

The α-amylase inhibition assay was determined using DNS.27 Various concentrations of plant extract (1.95, 3.9, 7.81, 15.62, 31.25, 62.5, 125, 250, 500 and 1000 μg/ml) and 0.02 M sodium phosphate buffer (pH 6.9 containing 6 mM sodium chloride) containing 0.04units of α-amylase solution were incubated for 10 min at 37°C, followed by 1% starch solution (500 μL) in 0.02 M sodium phosphate buffer (pH6.9) was added to all the test tubes. The reaction was stopped by the adding 3, 5-dinitro salicylic acid (1.0 mL) color reagent. The tubes were then incubated in a boiling water bath and cooled at room temperature. The reaction mixture was diluted to 10mL with distilled water and the absorbance of the reaction mixture was read at 540nm. The control samples representing 100% enzyme activity were also prepared without plant extracts and compared with the samples containing plant extracts.

RESULT AND DISCUSSION: The purity and quality of the drug was calculated by determining the ash values and moisture content of the drug because it contains earthy matters and some inorganic radicals like phosphates, carbonates and silicates of potassium, sodium and calcium. Extractive values were also calculated, it is useful for the determination of exhausted or adulterated drug and the results were presented in Table 1. Powdered drug and extract were treated with various reagents and were examined under ordinary light, near UV and far UV; the results were shown in Table 2.

Preliminary phytochemical studies indicated the presence of flavonoids, phenols, tannins, glycosides, steroids, triterpenoids (Table 3) and some of the important active constituents were quantified by specific procedures and results were mentioned in Table 4.

Diabetes mellitus is known to be affecting people of both developed and developing countries, harming a large percentage of the world’s population. In general, the control of blood glucose levels near the normal range is mainly depending on the use of antihyperglycaemic/ oral hypoglycaemic agents and insulin. However, all of these treatments have undesirable side effects associated with their efficacy leading to increasing attention in the use of natural products from medicinal plants for the alternative management of type 2 diabetes mellitus.29

An successful strategy for type 2 diabetes treatment is the strong inhibition of intestinal α-glucosidase and the mild inhibition of pancreatic α-amylase.30 Natural α-amylase and α-glucosidase inhibitors from medicinal plants give dietary strategies to control postprandial hyperglycemia, and the natural form of these inhibitors could be used in therapies with minimum side effects.31, 32 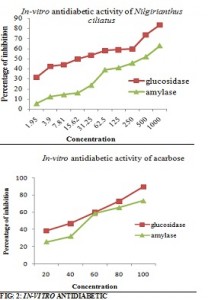 These results agreed with claims that plant phytochemical constituents are strong inhibitors of α-glucosidase and mild inhibitors of α-amylase enzyme.33, 34 Primary and some secondary metabolites from plants such as phenolic compounds, flavonoids, saponins, glycosides etc. that are reported to play an important role in adjusting the carbohydrate hydrolyzing enzyme activities and as a result contribute to the management of postprandial hyperglycemia.35 Hence, the antidiabetic effect of Nilgirianthus ciliatus might attribute to its inhibitory effect against carbohydrate hydrolyzing enzymes that retarding the digestion of carbohydrate to delay the postprandial increase in blood glucose.

ACKNOWLEDGEMENT: The authors are heartily thankful to DST for providing financial

assistance in the form of INSPIRE fellowship and Sri Ramachandra University for providing necessary facilities to carry out this research work.