ABSTRACT: The aim of the present work was to investigate the phytochemical components of an antidiabetic polyherbal formulation. The formulation was prepared using ingredients of Azadirachta indica A. Juss, Commiphora mukul, Curcuma longa L, Emblica officinalis Gaertn, Garcinia cambogia Gaertn, Gymnema sylvestre Retz, Momordica charantia L, Ocimum sanctum L and Trigonella foenum-graecum L. The formulation was evaluated for phytochemical properties by following standard protocols. The colour intensity or the precipitate formation was used as analytical responses to these tests. The formulation revealed the presence of active phytoconstituents such as carbohydrates, amino acid, proteins, phenols, flavonoids, tannins, terpenoids, steroids and insulin. The HPTLC fingerprint analysis revealed sixteen bioactive compounds when scanned at 520 nm and thirteen bioactive compounds at 254 nm. The study confirms that the formulation contains many phytoconstituents making it a prospective candidate for further development

INTRODUCTION: Medicinal plants have been found to have wide therapeutic application against various ailments. The phytochemicals present in the plants are responsible for their therapeutic properties. Phytochemicals are also responsible for different colour, flavour and smell of plants. Natural products such as pure phytoconstituents, polyherbal formulations and plant extracts offer huge opportunities for new drug development due to their unparalleled chemical diversity. Phytochemical analysis of plants which were used in folklore has yielded a number of active compounds with various pharmacological activities.

The modern methods describing the identification of active phytoconstituents in the plant material may be useful for proper standardization of herbal drugs by HPTLC technique 1, 2. Currently, HPTLC is often used as an alternative to HPLC for the quantification of plant products because of its simplicity, accuracy, cost-effectiveness and rapidity 3.

The aim of our present study was to evaluate the phytoconstituents of a novel antidiabetic polyherbal formulation formulation that was prepared using a patented aqueous extraction procedure. The use of aqueous extraction procedure eliminates the problem associated with residual solvents present in the finished product and reduces the cost of production, considerably.

Plant Materials: The polyherbal formulation was gifted by M/s. Lanson Biotech, Chennai. The list of plants used for the preparation of the formulation and the percentage of individual plant in the formulation are provided in Table 1.

Extraction of the plant materials:

The formulation was prepared using a patented aqueous extraction procedure 25. The herbs were collected from organic farms, which were free from pesticide residue. The herbs were cleaned in natural mineral water. Required quantities (as mentioned in Table 1) of fruit pulp with seed of Momordica charantia L, fruit pulp of Emblica officinalis Gaertn and leaves of Gymnema sylvestre Retz were extracted by pounding without any application of heat at room temperature and fresh juice was obtained.

The outer coating of Azadirachat indica A. Juss seed kernal were removed and was extracted using rotary press, without any external heating. The seeds of Trigonella foenum-graecum L, rhizome of Curcuma longa L, fruits of Garcinia cambogia Gaertn and resins of Commiphora mukul, Leaves & seeds of Ocimum sanctum L were air dried at room temperature and made a fine powder using a mixer. The mixture of fine powder obtained was soaked in the juice obtained from the other plants, which acted as a natural organic solvent.  The extract was dried at room temperature without any heating process.

The chemicals and reagents used in the study were of analytical grade.

The phytoconstituents of the antidiabetic polyherbal formulation were studied using standard procedures as described by Kokate 26. The formation of colour or precipitate, depending on the end point of the respective test, was noted after the addition of the reagent and the outcome of the test was represented as present (+) or absent (-). All the tests except those required the powder form of the formulation were carried out with freshly prepared stock solution of the formulation with a concentration of 1mg/mL.

To one millilitre test solution was added a few drops of Molisch’s reagent (5% alcoholic α- naphthol) followed by 2 mL of concentrated sulphuric acid along the inner side of the test tube.

To one millilitre of test solution was added 5 mL of Benedict’s reagent and kept boiling in a water bath for 5-7 minutes.

To two millilitres of prior mixed equal volume Fehling’s solution A and B was added 1mL of test solution and kept in boiling water bath for 5-10 minutes.

To one millilitre of test solution was added 1mL of Selivanoff’s reagent and 1mL of concentrated hydrochloric acid followed and kept in boiling water bath for 4-8 minutes.

To one millilitre of test solution was added a few drops of 0.25% of ninhydrin reagent and kept in a boiling water bath for 2-5 minutes.

One millilitre of test solution was taken in a test tube and heated for 5-10 minutes using a water bath.

To one millilitre of test solution was added 1 mL of Biuret reagent.

To one millilitre test solution was added 1 mL of Folin-Ciocalteu reagent and 0.5 ml of Na2CO3.

To one millilitre of test solution were added fragments of magnesium ribbon and a few drops of concentrated hydrochloric acid.

To one millilitre of test solution were added zinc dust and a few drops of hydrochloric acid.

To one millilitre of test solution was added a few drops of 5% ferric chloride.

To five millilitres of test solution was added 2 mL of chloroform and 3 mL of concentrated sulphuric acid.

To one millilitre of test solution was added a little amount of sulphur powder and mixed well.

To one millilitre of test solution was added a few drops of sulphuric acid and shaken well.

To one millilitre of test solution were added a few drops of acetic anhydride, boiled in boiling water for 3-5 minutes and after cooling added 1 ml of concentrated sulphuric acid.

Test A: Two hundred milligram of the formulation was mixed with 5mL of dilute sulphuric acid by warming in a water bath, filtered, and neutralized by adding of 5% of sodium hydroxide solution until it became alkaline (tested with pH paper).  Added 0.1 mL of Fehling’s solution A and B and heated in a water bath for 2 minutes.

Test B:  Repeated 'Test A, procedure by using 5mL of water instead of dilute sulphuric acid. Compared whether the intensity of precipitation showed in Test A was more than Test B.

The test solution (2mL) was shaken well in test tube and observed for froth (foam) formation.

To one millilitre of test solution was added the solution of α-naphthol and sulphuric acid.

The HPTLC fingerprinting of the polyherbal formulation was carried out at Captain Srinivasa Murti Research Institute of Ayurveda and Siddha Drug Development, Arumbakkam, Chennai- 600106. The formulation (2.0gm) was taken in a 100mL conical flask, mixed with water: ethyl acetate (1:1), shaken well and transferred to a 250 ml separating funnel. After shaking, the upper layer (ethyl acetate) was collected. The aqueous layer was repeatedly (thrice) shaken with ethyl acetate. The ethyl acetate fraction was filtered and dried over anhydrous sodium sulphate and concentrated up to 10mL.

Investigation of the aqueous extract of the antidiabetic polyherbal formulation revealed the presence of carbohydrates, amino acid, proteins, phenols, flavonoids, tannins, terpenoids, steroids and insulin whereas glycosides, saponins and anthocynidine were absent in the formulation as mentioned in Table 2. Phenol and flavonoid are strong antioxidants and are associated with many useful biological effects 27. It is well established that phenolic rich diet and beverages may increase plasma antioxidant capacity. Polyphenol rich diets provide significant protection against progressive cellular damage of many chronic pathological conditions including cancer, diabetes, cardio-vascular problems and aging 28.  Robert et al reviewed and reported that the therapeutic potential of flavonoids is due to their antioxidative, anti-atherosclerotic, antitumor and anti-inflammatory effects 29. Richelle et al reported that tannins have antioxidative property which is important in protecting cellular oxidative damage including lipid peroxidation whereas plant sterols reduce cholesterol absorption, which leads to a decrease in LDL-cholesterol concentrations in plasma 30.

TABLE 2: RESULTS OF QUALITATIVE INVESTIGATION OF THE ANTIDIABETICPOLYHERBAL FORMULATION

Demands of herbal medicines have increased in the last two decades. So there is a need to develop new tests and bioassays to ensure the quality, safety and efficacy of herbal drugs31. Phytochemical standardization is one of the tools for the quality assessment of herbal drugs, which includes preliminary phytochemical screening and HPTLC fingerprint analysis using modern analytical techniques. In the last few decades, HPTLC has become an important tool for the qualitative and quantitative phytochemical analysis of herbal drugs and formulations. The major advantage of HPTLC is that several samples can be analyzed simultaneously using a small quantity of marker compound and mobile phase with very less time 3. The finger print profile of the bioactive compounds obtained in the study could be used for the quality control purpose of the formulation. 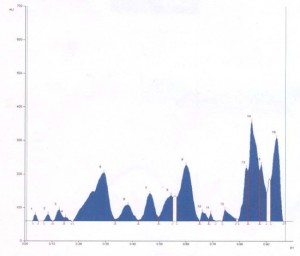 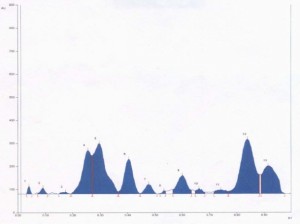 CONCLUSIONS: The present investigation revealed the presents of bioactive compounds namely phenols, flavonoids, tannins, terpenoids, steroids, and insulin in the polyherbal antidiabetic formulation. The HPTLC fingerprint analysis confirmed that the formulation possess many phytoconstituents. The polyherbal formulation is considered to be a potential source of natural antioxidants and may be a promising candidate for the treatment of diabetes and other metabolic disorders.  Further studies are needed to investigate the pharmacological profile of the formulation using in vitro and in vivo models.

CONFLICT OF INTEREST: The authors declared that they have no conﬂict of interest.

ACKNOWLEDGEMENT: The authors are grateful to the Captain Srinivasa Murti Research Institute of Ayurveda and Siddha Drug Development, Arumbakkam, Chennai- 600106 for the HPTLC analysis.