ABSTRACT: Objective: The antiepileptic potential of the petroleum ether (PETO) and methanolic extracts (METO) of the whole plant (roots, leaves, stem, and bark) of Trema orientalis (family: Ulmaceae) was evaluated using different experimental models of epilepsy in rats and mice. Materials and Methods: The anti-epileptic activity of the PETO and METO was evaluated using Picrotoxin, Isoniazid, and NMDA induced convulsion models. The brain GABA was also estimated in Picrotoxin induced convulsion model. The amount of the Lupeol present in PETO was estimated by HPTLC. Results: Preliminary phytochemical screening of the extracts revealed the presence of phytosterols, triterpenoids, Fixed oils & Fats, Tannins, phenolics, flavonoids, and carbohydrates. The anti-epileptic activity of PETO and METO at doses of 250 mg/kg and 500 mg/kg showed a significant increase (p˂0.001) in the onset of convulsions in the models used. The extracts also showed a significant increase in the brain GABA levels in the doses used. The amount of lupeol present in PETO was estimated to be 8.76 µg/ml. Conclusion: The PETO and METO showed significant anti-epileptic activity in the doses used mediated through an increase in the brain GABA levels.

INTRODUCTION: Epilepsy is a disorder of the brain that affects many people around the world and is characterized by recurrent unprovoked seizures 1. These seizures are indicative of symptoms of high neuronal activity in the brain. It is characterized by an enduring predisposition to generate epileptic seizures by the neurobiological and psychological consequences of this condition 2. The antiepileptic drugs that are presently available are unable to control seizures effectively in as many as 25% of the patients 3, 4. The conventionally available antiepileptic agents like phenytoin, carbamazepine, and sodium valproate have several side effects like neurotoxicity and sedation 5.

As the majority of antiepileptic drugs are consumed life long, concomitant administration of other drugs predisposes to the risk of a drug interaction. Thus, an investigation of a safe antiepileptic agent that is highly efficacious and less toxic is necessary.

The medicinal herb, Trema orientalis (Linn.) Blume belonging to the family, Ulmaceae, is a shrub or small to medium size tree and its height varies depending on the location and climatic conditions. It can grow up to 18 m high in forest regions, and up to 1.5 m tall in the savannah. The slender branchlets are covered with white velvety hairs 6. The young leaves are consumed by the Zulus in South Africa, and the fruits and leaves are also used for its medicinal value 7, 8. The root of T. orientalis is used in folk medicine for the treatment of trauma, blood stasis, hematuria, and bleeding of intestines and stomach 9. The stem bark decoctions are used as a vermifuge and anti-dysenteries 10. The stems and twigs infusion are used to treat fever and toothache.

Both stem bark and leaf decoction of the T. orientalis is used to treat malaria, manage pain in tired muscles and aching bones as well as venereal disease 11. The leaf of T. orientalis is mixed with leaves of Bidens pilosa, Citrus aurantifolia, and peels of unripe pineapple. It is boiled and the decoction used in the management of jaundice 12. The leaves macerated in lemon juice are used as a remedy for bronchitis, pneumonia and pleurisy 13.

Collection and Authentication: For the whole study plant of Trema orientalis L. Blume was collected from Tirupati, Chittoor district, Andhra Pradesh, India in the month of June-July matching its seasonal availability. The plant was identified and authenticated (Voucher no. 2307), and the voucher specimen was also deposited for future reference.

Phytochemical Screening: Preliminary Phyto-chemical screening of the extracts of the whole plant of T. orientalis was carried out using standard procedures 14, 15.

Animals: Albino rats (Wistar strain) and Swiss Albino mice of either sex weighing 180-220 g and 18-22 g respectively were procured from the animal house of Dayananda Sagar University and were acclimatized for seven days under laboratory conditions. The study protocols were duly approved by the Institutional Animal Ethics Committee bearing Approval no. DSCP/M Pharm/IAEC/03/16-17. Studies were performed by the CPCSEA guidelines.

Acute Toxicity: Toxicity study of PETO and METO was determined according to the OECD guidelines No. 423. All treated animals were monitored for at least twice daily for behavioral and mortality changes.

Picrotoxin Induced Convulsions: Albino mice (18-22 g) of either sex were divided into 6 groups of six rats each and was fasted overnight before the test, but the water was supplied ad libitum. Group I was maintained as control which was given normal saline p.o. once daily for 7 days. On 7th day 60 min after administration, picrotoxin (7 mg/kg i.p.) was administered. Group II was administered with diazepam (4 mg/kg i.p.) alone on 1st day, and 30 min after administration (diazepam) picrotoxin was administered. Groups III & IV are treated with different doses of PETO (250 and 500 mg/kg p.o.) and Group V & VI were treated with different doses of METO (250 and 500 mg/kg p.o.) respectively once daily for 7 days.

On 7th day 60 min after administration of the test extracts, picrotoxin was administered. The animals were observed for the onset of convulsions 16, 17, 18.

Isoniazid Induced Convulsions: Albino mice (18-22 g) of either sex were divided into 6 groups of six rats each and was fasted overnight before the test, but the water was supplied ad libitum. Group I was maintained as control and was given normal saline p.o. once daily for 7 days. On the 7th day, 60 min after administration of saline, isoniazid (250 mg/kg i.p.) was administered. Group II was administered diazepam (4 mg/kg i.p.) alone on 1st day, and 30 min after administration (diazepam) isoniazid was administered. Groups III & IV were treated with different doses of PETO (250 and 500 mg/kg p.o.), and Group V & VI were treated with different doses of METO (250 and 500 mg/kg p.o.) respectively once daily for 7 days.

On the 7th day 60 min after the administration of extracts, isoniazid was administered. The animals were observed for the onset of convulsions 18, 19, 20.

Estimation of Brain GABA Content: The brain aminobutyric acid (GABA) content was estimated in picrotoxin induced model. Animals were sacrificed by decapitation, and brains were rapidly removed and separated forebrain region. It was blotted, weighed and placed in 5 ml of ice-cold trichloroacetic acid (10% w/v), then homogenized and centrifuged at 10,000 rpm for 10 min at 0 °C. A sample (0.1 ml) of tissue extract was placed in 0.2 ml of 0.14 M ninhydrin solution in 0.5M carbonate-bicarbonate  buffer (pH 9.95), kept in a water bath at 60 °C for 30 min, then cooled and treated with 5 ml of copper tartrate reagent (0.16% disodium carbonate, 0.03% copper sulphate and 0.0329% tartaric acid). After 10 min fluorescence at 377/455 nm in a spectrofluorimeter was recorded 23, 24.

Estimation of Lupeol in PETO by HPTLC: Trema orientalis contains Lupeol which is reported to possess anticonvulsant activity 25. Hence, HPTLC method was used to quantify the amount of lupeol content in PETO. The petroleum ether extracts were filtered and dissolved in ethanol and subjected to HPTLC analysis. Chromatography was performed on 20 cm × 20 cm aluminum packed HPTLC plates coated with 0.2 mm layers of silica gel - 60 F254. A working standard of 1 mg/ml solution of lupeol was prepared and used as the reference standard. The chromatogram was developed up to 70 mm under chamber saturation conditions using Toluene: Methanol (9:1.5 v/v) as a solvent system in Camag twin trough chamber. The developed plates were photo-documented at 254 nm, and the amount of lupeol present in PETO was quantified using the standard formula.

Statistical Analysis: Values were expressed as mean ± SEM. The experimental mean values were compared statistically with that of vehicle control using One Way Analysis of Variance (ANOVA) followed Dunnett’s multiple comparison test. The analysis was carried out using Graph Pad Prism software V.7.p values less than 0.5 were considered to be statistically significant.

Acute Toxicity Studies: An acute toxicity study of PETO & METO was determined in rats, as per OECD guidelines no. 423 and the extracts produced no mortality up to 2000 mg/kg.

Effect of PETO and METO on Isoniazid Induced Convulsions in Rats: Administration of isoniazid at 250 mg/kg, i.p. produced significant convulsions in rats. No convulsions were recorded with diazepam and it showed 100% protection in rats. Pretreatment with low and high doses of both PETO and METO showed anticonvulsant effect by increasing the time in the onset of tonic convulsion and showed protection up to 100% in all the animal's Table 2.

TABLE 1: EFFECT OF PETO AND METO ON PICROTOXIN INDUCED CONVULSIONS IN RATS

TABLE 2: EFFECT OF PETO AND METO ON ISONIAZID INDUCED CONVULSIONS IN RATS

TABLE 3: EFFECT OF PETO AND METO ON NMDA-INDUCED SEIZURES IN MICE

TABLE 5: ESTIMATION OF LUPEOL IN PETO BY HPTLC 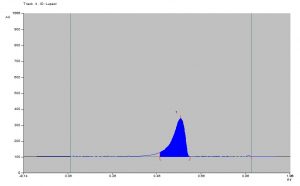 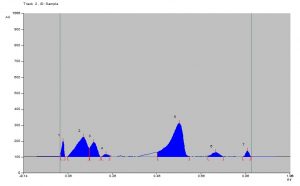 FIG. 1B: HPTLC PROFILE OF PET ETHER EXTRACT OF TREMA ORIENTALIS AT 254 nm

DISCUSSION: Epilepsy is a common chronic neurological disorder, and it imposes the biggest burden on health care systems. Deaths are likely to be caused by the background etiology of epilepsy, e.g., tumors, trauma, degenerative conditions, or cerebrovascular diseases. INH is commonly used for the treatment of TB but can have adverse effects on the CNS, causing seizures and comas 26. INH induced seizures resemble symptoms of petitmal epilepsy. Gamma-aminobutyric acid (GABA) is the predominant inhibitory neurotransmitter in the CNS.

GABA is synthesized from the glutamate, exclusively in GABAergic neurons, by the action of the enzyme glutamic acid decarboxylase. The convulsant activity of the INH is due to its effect on GABA-synthesis inhibitor, glutamic acid decarboxylase 2, 27. The inhibitory effect of INH on the enzyme leads depletion of GABA concentration 5 and an increase in glutamate level in the brain. Depletion of GABA concentration resulted in a seizure. The PETO and METO at both low and high doses increased the onset of convulsions and showed 100% protection of the animals. Therefore the possible mechanism of the extracts may be due to increased GABA synthesis possibly by stimulation of L-Glutamate or by inhibition of GABA degradation by GABA transaminase 28, 29.

Picrotoxin acts as a GABAA-antagonist by modifying the function of the chloride ion channel of the GABAA receptor complex 19, and its GABA inhibitory actions affect different areas of the central nervous system. Although PETO and METO at different doses did not protect the animals against picrotoxin-induced convulsions and death, the fraction extended the mean onset of seizures, which indicates mild anticonvulsant activity against picrotoxin.

NMDA is an agonist that produces effects similar to glutamic acid at the NMDA receptors and exerts its convulsant effect by activating the receptors to enhance excitatory glutaminergic neurotransmission 30, 31. NMDA-induced seizures in rodents have previously been proposed as a model of refractory seizures and are significantly suppressed by NMDA receptor antagonists 32. The effects produced by METO suggest that the extract might be inhibitory against glutaminergic excitatory responses, specifically at the NMDA receptors 33. The significant increase in the GABA concentration in the brain of animals were observed with low and high doses of the PETO, METO, and Diazepam treated groups, indicated that the extracts enhance the synthesis of GABA in GABAergic neurons.

CONCLUSION: The results obtained indicate that the extracts have significant anti-epileptic activity, which thus validates the traditional claims of Trema orientalis. The results of this study revealed that administration of extracts increased levels of GABA in the brain, showing that the actions were mediated by centrally acting mechanisms.

ACKNOWLEDGEMENT: The authors are grateful to Rajiv Gandhi University of Health Sciences, Bangalore, Karnataka for funding this research work.

CONFLICT OF INTEREST: There is no conflict of interest among all authors in this study.