PRELIMINARY PHYTOCHEMICAL SCREENING AND GC-MS ANALYSIS FOR IDENTIFICATION OF BIOACTIVE COMPOUNDS FROM ABUTILON FRUTICOSUM GUILL AND PERR. A RARE AND ENDEMIC PLANT OF INDIAN THAR DESERT

PRELIMINARY PHYTOCHEMICAL SCREENING AND GC-MS ANALYSIS FOR IDENTIFICATION OF BIOACTIVE COMPOUNDS FROM ABUTILON FRUTICOSUM GUILL AND PERR. A RARE AND ENDEMIC PLANT OF INDIAN THAR DESERT

ABSTRACT: Present work was aimed to determine, identify, and characterize the bioactive chemical compounds from methanolic leaves extract of Abutilon fruticosum by GC-MS analysis. Fresh disease-free leaves were collected shade dried and powdered for extraction with HPLC grade methanol. Preliminary phytochemical screening of methanolic leaves extract was performed using standard methods to determine the presence of different chemical compounds; the crude extract was subjected to GC- MS analysis for the identification of bioactive compounds. Phytochemical screening of methanolic leaves extracts revealed the presence of carbohydrates, proteins, alkaloids, phenols, flavonoids, terpenes, phytosterols, etc. Furthermore, GC MS analysis of the extract revealed the presence of 65 bioactive compounds. Some major biologically active compounds identified were Azulene (24.91%), Hexadecanoic acid (13.27%), Phytol (9.51%), Beta-sitosterol (3.19%), Lupeol (1.21%), Campesterol (0.33%) etc. These chemical compounds are biologically active and pharmacologically important. The study provides detailed information about the identification and chemical characterization of various medicinally important phytocompounds from methanolic leaves extract of this plant. Although the plant is rare and endemic to Indian Thar Desert and previously not explored very much, such kind of study about this plant could provide valuable information to be used in pharmacological research.

INTRODUCTION: The ancient medicinal system played an important role in meeting the demand at the global level. Approximately 80-90 percent of the world’s population mainly depends on traditional medicine for primary healthcare; most of them involve the use of plant extracts 1. Medicinal plants are rich in various bioactive compounds such as alkaloids, steroids, flavonoids, glycosides, terpenoids, phenols, gum, and mucilage, etc.

These components are mainly responsible for the therapeutic activity of plants. To understand the bioactivity of plants, whether it is medicinal, poisonous, or nutritive knowledge of its phytoconstituents, is necessary. Thus, phyto-chemical research is very important in the development and discovery of the drug. With the increasing advancement of technology, GC-MS analysis emerged as a powerful technique for the identification and quantification of bioactive compounds from medicinal plant extract even in very minute quantity. One such an important medicinal plant is Abutilon fruticosum Guill. and Perr. They are commonly known as ‘Imarti’. The plant is a rare and endemic medicinal plant of Indian Thar Desert region 2.

It is branched perennial undershrub with a dense slender and thin stem, acute to sub obtuse ovate to chordate leaf, velvety on both the surfaces, light yellow colored solitary flowers, and schizocarpic cylindrical fruit with 8-10 awnless mericarp 3. It is xeriscaping plant, commonly found at small hillocks and rocky plains of the arid region of Rajasthan Fig. 1. 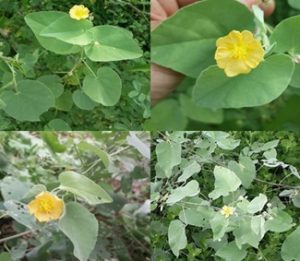 The plant belongs to genus Abutilon and its sister species such as Abutilon indicum reported having great medicinal utility. All parts of this plant are useful in the treatment of various diseases and ailments such as leprosy, rheumatism, piles, ulcer, jaundice, bronchitis, inflammation of bladder etc. 5, 6, 7. From the critical literature survey, it was revealed that there is no previous report on phytochemical characterization of this plant. The identification of phytoconstituents through GC-MS analysis from crude methanolic leaf extract is also missing from this plant. As it is an endemic plant of the Indian Thar Desert region and due to lacking knowledge about its phytoconstituents, chemical characterization is necessary to explore the potential of the plant to be used for medicinal purposes. Increasing urbanization and overgrazing lead to habitat destruction of this endemic plant, and it has become rare in occurrence. So new cultivation techniques should be practiced to save the medicinal plant species of this region.

The present study was conducted for the identification of bioactive compounds in the leaves of A. fruticosum by preliminary phytochemical screening and GC-MS analysis, which could provide useful information about this plant for further studies.

Plant Material Collection: Fresh and disease-free leaves of the plant A. fruticosum were collected from rocky areas of Kailana and Mandore of Jodhpur, Rajasthan, India, during August 2018. The plant sample was identified and authenticated by BSI, Arid Zone Regional Centre (Plant authentication number- BSI/AZRC/1.12012), and the voucher specimen was deposited in the Herbarium of Department of Botany, Jai Narain Vyas University, Jodhpur (Rajasthan).

Preparation of Plant Extract: Thoroughly washed and shade dried leaves of plant material were coarsely powdered and kept in an airtight container till further use.

10 g of leaf powder was extracted with 100 ml of HPLC grade Methanol and kept in the dark for 48 h with occasional stirring. The extract was then filtered with Whatman filter paper no.1 solvent was evaporated from the filtrate till a semi-solid mass is obtained.

GC-MS Analysis: GC-MS analysis of crude extract was performed with GC-MS equipment QP 2010 Shimadzu, Japan. Experimental conditions for GC-MS were as follow: Helium gas as the carrier gas at a constant flow rate of 16.3 ml/min and column flow rate 1.21ml/min. Injector and mass transfer line temp were 200 and 280 °C for 10 min. The total running time of GC-MS was 50 min. The injection volume was 1µl.

As individual compounds eluted from the GC column where these compounds were bombarded with a stream of electrons, causing them to break into fragments. Samples were run fully at a range of 50/650 m/z and mass spectrum graphs obtained, which was a fingerprint of a molecule. The identified compounds were compared with the NIST library and Willey spectral library search programme. 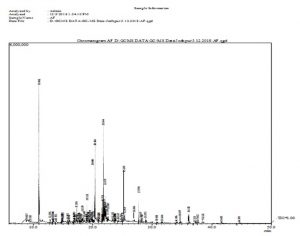 All the major biologically active compounds identified through GC-MS analysis were listed in Table 3 along with their peak area, molecular structure, chemical nature, and bioactivities.

DISCUSSION: Abutilon fruticosum is a rare and endemic plant of the Indian Thar desert. As the plant belongs to the genus Abutilon which has been used since ancient times to treat various diseases and ailments. Most of the compounds identified from the plant mainly belong to phenols, phytosterols, terpenes, fatty acids, and esters. These compounds were reported to contain various medicinal properties such as anti-inflammatory, antimicrobial, anticancerous, mosquito larvicidal, hepatoprotective activity, etc. Azulene is an aromatic hydrocarbon identified with highest peak area reported to have anti-microbial and anti-inflammatory, antipyretic, and soothing properties 10. Polyunsaturated fatty acids and their esters such as 8,11,14 Docosatrienoic acid, methyl ester, alpha linolenic acid, etc. were identified from the plant extract known to contain anti-inflammatory, anticancerous, vasodilator and antimicrobial properties 11. These are important components for the production and movement of energy throughout the body, for the regulation of transportation of oxygen and for maintaining the integrity of cell structure and to control the cholesterol level of blood. Various fatty acids and their esters were identified from the extract that is known to possess anti-microbial, antifungal, anti-inflammatory properties 12. Phytol is acyclic diterpene alcohol with known antimicrobial, anticancer, anti-inflammatory, and diuretic properties 13. It is used as a precursor of vitamin E 14 and vitamin K1 15. It is used in cosmetics, shampoos, detergents 16. Phytosterols are plant-based sterols with potential to inhibit lung, stomach, ovarian, breast, colon as well as prostate cancer 17, 18, 19. Some medicinally important phytosterols identified in the plant with less than 1 percent area were Beta-sitosterol, stigmasterol, and gamma sitosterol, respectively.

CONCLUSION: Preliminary phytochemical screening and GC-MS analysis of a methanolic extract of leaves of Abutilon fruticosum reveal the presence of various medicinally valued phytoconstituents such as alkaloids, terpenoids, phenols, phytosterols etc. This is the first report of the identification of active constituents from the leaf of this plant. The biological properties of compounds present in leaf extract of Abutilon fruticosum supports its medicinal utility. Although, other species of this genera have been explored very well and of great medicinal value. The present study could provide a valuable knowledge about this plant to be used in pharmacological research for human welfare after its toxicology test.

FINANCIAL SUPPORT: The research was carried out using fellowship under the scheme of UGC funded NF-OBC provided to one of the authors.

CONFLICTS OF INTEREST: Authors declares no conflict of interest