ABSTRACT: This study aimed to investigate the preparation and characterization of polymeric nanoparticles containing extract of Andrographis paniculata using Eudragit S 100 polymer. The methanolic extract of aerial parts of Andrographis paniculata Nees (Acanthaceae) was prepared and standardized for andrographolide content using the High-Performance Liquid chromatography technique. Three formulations containing 50, 100 and 150 mg of extract were prepared by solvent displacement method. Parameters including drug: polymer ratio, stabilizer, solvent, and stirring speed were optimized. Characterization of the formulations was carried out using particle size analysis, PDI, DSC, X-RD, SEM techniques, entrapment efficiency and in-vitro drug release studies. The particle size of the nanoformulations was found to be within the range of 300-400 nm, with entrapment efficiency more than 75% and drug release more than 55% after 8 h. Aerial parts extract of Andrographis paniculata was embedded and dispersed in Eudragit S 100 polymer as smooth spherical nanoparticles which may prove to be a novel drug delivery system.

INTRODUCTION: Nanoparticles are sub- a nanosized colloidal structure composed of synthetic or semi-synthetic polymer with Size range of 10-1000 nm. The drug is dissolved, entrapped, encapsulated or attached to a nanoparticle matrix (carriers). The use of nanoparticles allows changing the pharmacokinetic properties of the drug without changing the active compound 1. Novel drug delivery systems not only reduce the repeated administration to overcome non-compliance but also help to increase the therapeutic value by reducing toxicity and increasing the bioavailability.

Nano-sized drug delivery systems of herbal drugs have a potential future for enhancing the activity and overcoming problems associated with plant medicines. However, there are some limitations of these herbal extracts/plant actives like instability in highly acidic pH, liver metabolism, short half-life, solubility, etc. 2, 3 Various novel drug delivery systems such as microspheres, Nano suspension, Nanoemulsions, polymeric nanoparticles, etc., have been reported for herbal drugs 4.

Andrographis paniculata Nees (Acanthaceae) commonly called Kalmegh is a well-known medicinal plant of Ayurveda with various pharmacological properties, has been used for treatment of various liver disorders and jaundice. The major phytoconstituent of the plant are diterpene lactones including andrographolide, deoxyandrographolide, neoandrographolide, and andrographolide 7. The ingredients are also reported to be unstable in extracts of gastrointestinal acidic and alkaline pH conditions with short biological half-life. Preparation of polymeric nanoparticles of andrographolide with improved physicochemical properties and consequently its bioavailability of drugs has been reported 8.

Similarly, the preparation of Nanoformulation of the extract also may be beneficial. With this background the present study was proposed to encapsulate extract of Andrographis paniculata containing andrographolide and other ingredients in extract to overcome its disadvantages.

Preparation of the Extract: The air-dried powdered material (1 kg) of the sample was defatted by refluxing with petroleum ether (60° - 80°) for 8 h. The defatted powdered material of sample was subjected to Soxhlet extraction with methanol for 12 h. The extract was concentrated under reduced pressure on rotary evaporator to obtain the crude extract. The percentage yield was calculated with respect to air-dried drug. The extract was stored in an airtight container for further use.

Sample Preparation: 100 mg of methanolic extract was dissolved in 10 ml of HPLC grade methanol with the help of sonication.

Standard Preparation: 5 mg of andrographolide was dissolved in 5 ml of HPLC grade methanol.

Preparation of Nano Formulation: The solvent displacement method was selected for the preparation of nanoformulation as polymeric nanoparticles using the methanolic extract of Kalmegh 10, 11. The method was first standardized using placebo preparation. Nanoparticles were prepared by varying type, amount of solvent and stabilizer. Based on particle size and PDI analysis best possible combination of solvent, polymer and stabilizer was selected. The nanoparticles were prepared with 50, 100 and 150 mg of extract.

For optimization of different parameters such as drug-polymer ratio, stirring speed, the concentration of stabilizer, and volume of aqueous phase, 4 sets of experiments with 9 formulations were carried out, and the prepared formulations were evaluated for particle size and PDI. In each set of experiments, only one formulation variable was changed at a time while the other parameters were kept same. The best formulation having range between 300-400 nm particle size and 0.1-0.7 PDI was selected for the study.

Procedure: The polymer Eudragit S 100 along with 50 mg, 100 mg, 150 mg of Kalmegh extract in the ratio of 1:4, 1:2, 1:1 were dissolved in 30 ml of ethanol which formed the organic phase. This organic phase was added at the rate of 2 ml/min under atmospheric pressure into an aqueous medium (50 ml) containing 1.5% 0f polyvinyl alcohol as the stabilizer under 15000 rpm using Ultra Turrax homogenizer. After the addition of the organic phase, stirring was continued for 15 min at the same speed. After 30 min, the colloidal dispersion was subjected to mild stirring to remove ethanol. The milky colloidal suspension was formed. The batches were named F1, F2 and F3.

Scanning Electron Microscopy: The formulation and the extract were subjected to microscopic examination (SEM) using Joel 840A scanning electron microscope for characterizing size and shape at IISC, Bangalore.

X-ray Diffraction: The extract and the formulation were subjected to X-RD study. Powder X-ray diffraction (PXRD) patterns were traced employing an X-ray diffractometer for the samples, using Cu Kα1- radiation at IISC, Bangalore.

Drug Entrapment Efficiency: The nanoparticle suspension (2 ml) was taken and cold Centrifuged at 10000 rpm for 30 min. The supernatant contains unentrapped drug and sediment contains the entrapped drug.  The supernatant was analyzed by HPLC for free drugs. The Percentage drug entrapment was calculated using the straight-line equation from Standard calibration curve by direct method 14.

RESULTS AND DISCUSSION: The methanolic extract was prepared and its yield was found to be 19.1%.

Estimation of Andrographolide in Extract Content by HPLC: Percentage of andrographolide was found to be 11.14%. The chromatograms of standard and extract were shown in Fig. 1 and 2. 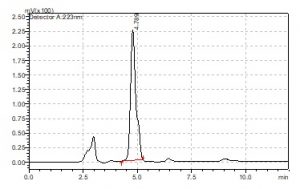 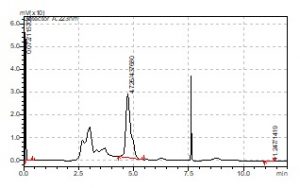 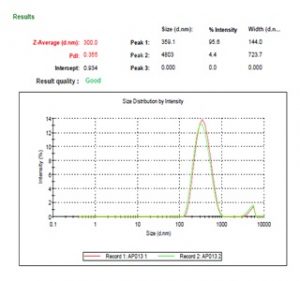 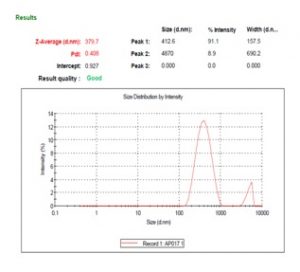 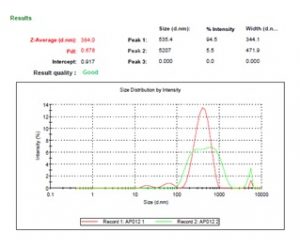 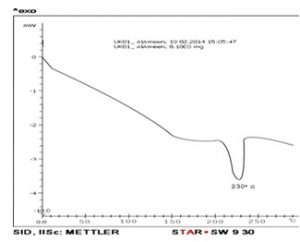 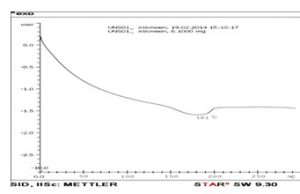 Scanning Electron Microscopy: The drug-loaded nanoparticles were found to be spherical with a smooth surface. The extract was found to have ruptured surfaces. The images are shown in Fig. 8 and 9. 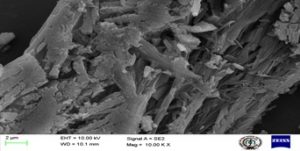 FIG. 9: SEM OF NANOPARTICLES OF NANOFORMULATION

X-ray Diffraction: The prominent peaks of Kalmegh extract were also seen at the same position in the nanoformulation with decreased intensity as shown in Fig. 10 and 11. 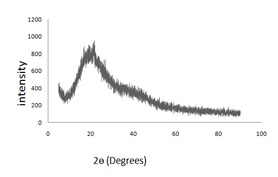 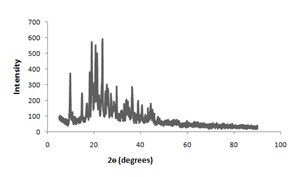 In-vitro Drug Release Study: Formulation 1 contain 50 mg of an extract with 1:4 Drug- Polymer ratio, and least particle size exhibited 64% of release after 8 h whereas the other two formulations showed 58% and 57% respectively. These results are in agreement with other reported findings 15; lesser the particle size drug release is more.

CONCLUSION: Methanolic extract of aerial parts of Andrographis paniculata (Acanthaceae) commonly known as Kalmegh was embedded and displaced in Eudragit S 100 as smooth spherical nanoparticles with good entrapment and drug release. The formulation may be used as a novel drug delivery system.

AUTHORS CONTRIBUTION: All the authors have contributed equally.

CONFLICTS OF INTEREST: Declare none