PREPARATION AND CHARACTERIZATION OF MESALAMINE SOLID DISPERSIONS BY KNEADING METHOD

PREPARATION AND CHARACTERIZATION OF MESALAMINE SOLID DISPERSIONS BY KNEADING METHOD

INTRODUCTION: Mesalamine is 5-amino salicylic acid, active moiety of sulphasalazine. Its major indications are to treat mild to moderate acute exacerbations of ulcerative colitis’s in remission, particularly in patients intolerant of sulphasalazine. It is white to pinkish crystals slightly soluble in water, 20 to 30 % absorbed following oral administrations.

Together with the permeability, the solubility behavior of a drug is a key determinant of its oral bioavailability. There have always been certain drugs for which solubility has presented a challenge to the development of a suitable formulation for oral administration. Examples such as griseofulvin, digoxin, phenytoin, sulphathiazole and chloramphenicol come immediately to mind. With the recent advent of high throughput screening of potential therapeutic agents, the number of poorly soluble drug candidates has risen sharply and the formulation of poorly soluble compounds for oral delivery now presents one of the most frequent and greatest challenges to formulation scientists in the pharmaceutical industry 1, 2.

Urea is the end product of human protein metabolism, has a light diuretic effect and is regarded as non-toxic. Its solubility in water is greater than 1 in 1 and it also exhibits good solubility in many common organic solvents. In one of the first bioavailability studies of solid dispersions, it was shown that sulphathiazole was better absorbed in rabbits when given as a eutectic with urea 2. Similarly, Goldberg et al., 3 reported faster dissolution rates of chloramphenicol when prepared with urea as the carrier. The release of naproxen from solid dispersions in PEG 4000, 6000 and 20 000 could be further enhanced when either sodium lauryl sulphate (SLS) or Tween 80 (a polyethylene sorbitan fatty acid ester) was added to the system 4. Punitha S et al., studied the use of Urea as a carrier for solid dispersion of Celecoxib 5.

The purpose of this study was to prepare solid dispersion by Kneading method, to improve the dissolution rate of Mesalamine. It was postulated that, if the drug is only slightly soluble in water, the dissolution process could be the rate-limiting step in the absorption of drug thus resulting in poor bioavailability.

MATERIALS AND METHODS: Mesalamine was obtained as gift sample from Sun Pharmaceutical Ltd, Gujarat. All the other chemicals and solvents of laboratory grade were purchased from Loba chemicals, Mumbai, and were used as it is.

Methods for Preparation of Solid Dispersion of Mesalamine (Kneading Method): Mesalamine and the various water soluble carriers (SLS and Urea) were weighed in different ratio 1:1, 1:2, and 1:3 and transferred to mortar for kneading using hot water up to 45 minutes. Sufficient methanol was being added to maintain paste like consistency. The resulting paste was then dried in hot air oven at 45ºC for 24 hours. The dried dispersions were milled and passed through sieve No. 18.The prepared dispersions were stored in glass vials and used for further studies.

Detection of Drug Content in prepared Dispersions 9: Three samples each of prepared Mesalamine dispersions equivalent to 100mg of Mesalamine were accurately weighed, crushed and transferred to 100ml standard conical flask and the volume was made up to 100 ml with Phosphate buffer pH 6.8, filtered through Whatmann filter paper and absorbance was taken at 331.0 nm.

Solubility Determination: Solubility study was carried out by using flask shaker method. Excess Mesalamine and its different dispersions were introduced separately into the amber colored vials with 25 ml capacity, each containing 25 ml of distilled water and shaked for 24 hours at room temperature. The content of each bottle was then filtered through Whatmann filter paper. The filtrate was then diluted with distilled water and assayed spectrophotometrically at 230 nm (UV-visible Spectrophotometer-Shimadzu 1601). Solubility of each sample was determined in triplicate. Results are shown in table 1 and 2.  Fig. 1 shows a comparative phase solubility study.

TABLE 2: SOLUBILITY ANALYSIS OF MESALAMINE AND ITS SOLID DISPERSION IN DISTILLED WATER 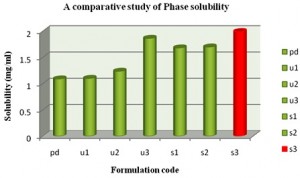 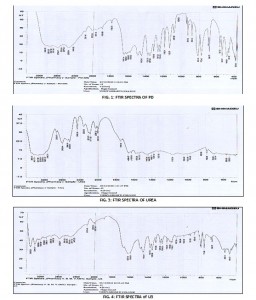 Powder X-ray diffraction: The cavity of the metal sample holder of x-ray diffractometer was filled with the ground sample powder and then smoothened with a spatula. X-ray diffractograms of Mesalamine and its dispersion samples were obtained using a Philips Analytical X Part PRD / SRS Division, N.B.B.S. and L.U.P, from Nagpur. A scanning rate of 0.04 2θ s-1 over the range of 10-600 2θ by using CuK∝ as tube anode having wavelength 1.5418A0 was used to record each spectrum. Fig.7, 8, 9 shows XRD spectras of PD, U3 and S3 respectively. 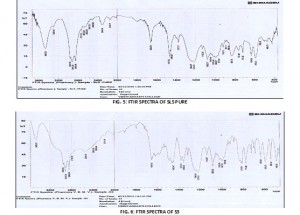 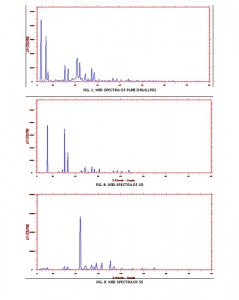 Dissolution Studies: The dissolution test was carried out by using USP-II (rotating paddle). The dissolution conditions includes, Dissolution medium (Phosphate buffer pH 6.8), Temperature (370C ± 0.50 C), Speed of Rotation (50 rpm), Volume of Medium (900 ml.). Mesalamine containing   prepared solid dispersions equivalent to 50mg were placed in the basket of dissolution medium and the apparatus was run. The 10 ml aliquot was withdrawn at interval of every 5 min. up to 30 min. After withdrawing each sample same amount of drug free dissolution medium was replaced so as to maintain sink condition. The samples were filtered through Whatmann filter paper and absorbance was recorded at 331.0 nm. The data obtained is shown in figure 10. 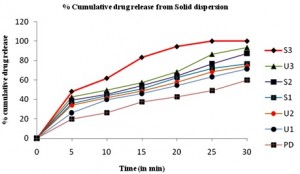 Another probable theory concerns to an increasing effective Solubilization process by carriers in the microenvironment (diffusion layer) immediately surrounding the drug particles. Solubility increases with increase in carrier concentration. In summary, the order of solubility was found to be S3 > U3 > S2 > S1> U2 > U1> PD (As shown in Table no 2). As expected, the dissolution rate of pure Mesalamine was extremely poor with only about 47.76 % of drug released within 30 min of the dissolution run (fig. 10). As stated this observations might be attributed to poor wettability and particle agglomeration during the run. When incorporated into solid dispersions, the dissolution rate of Mesalamine from all dispersions was significantly higher than that of pure Mesalamine (Fig. 10) the most rapid dissolution was observed with the S3 solid dispersion in comparison with the other dispersions.

The fastest dissolution from S3 dispersion might be attributed to the solubilizing effects of S3 on the active drug. Overall, the increase in dissolution rates of drugs with different carriers and their combinations may be due to lower contact angle, improved wettability and increased surface area. FTIR study (Fig. 2, 3, 4, 5 & 6) of Mesalamine and its different dispersions showed decrease in intensity of peaks of functional groups as compared to the drug Mesalamine, indicating the decrease in crystalinity. XRPD study (Fig. 7, 8 & 9) reveals the physical interaction between the drug and polymers.

All prepared dispersions showed changes in the number of peaks or few diffuse peaks were observed in all dispersions as compared to XRPD spectra of raw Mesalamine drug, which indicate decrease in crystalinity in dispersed Mesalamine. The decreased drug crystallite size can explain the faster dissolution and increased solubility, which indicates that there is physical interaction between drug and polymers (fig. 10).