ABSTRACT: Solid lipid nanoparticle proved appropriate as prolonged release formulation for lipophilic drugs. The present work dealt with the preparation of the antifungal lipophilic drug nystatin into solid lipid nanoparticles ((Nyst-SLNs).) formulation for topical delivery with the aim to prolong its release and effectiveness. Hot homogenization and ultrasonication were applied in the production of (Nyst-SLNs). Different matrix material and stabilizers were tested. All the formulations were subjected to particle size analysis, zeta potential, drug entrapment efficiency and in-vitro release studies. Transmission electron microscopy was conducted to investigate the morphology of nystatin loaded nanoparticles. The differential scanning calorimetry visualized the dispersed amorphous state of nystatin in the SLN. In addition, the present study addresses the compositions of different formulation on the physicochemical properties and drug release profile of Nyst-SLNs.

INTRODUCTION: Solid lipid nanoparticles (SLNs) are the new generation of nanoparticulate active substance vehicles which attract major attention as novel colloidal drug carriers for topical use. It improves the penetration and transport active substances particularly lipophilic agents and thus intensifies the concentration of these agents in the skin 1.

Nystatin is a polyene lipophilic antifungal drug, that has been used in treatment of cutaneous, vaginal and oral fungal infection since 1950 2. It is often used in large dose which varies from 100,000 units (for oral infections) and 1 million (for intestinal ones) at risk for fungal infections such as AIDS patients and patients receiving chemotherapy.

Trial to improve its effectiveness or decrease its dose is going. Recently topical formulation of nystatin was developed, Quinones et al., prepared nystatin gel for topical delivery of nystatin 3.

The aim of current study is to develop lipid nanoparticulate formulations of nystatin in attempt to increase its efficacy for topical application. Its formulation in solid lipid nanoparticles can promote its lethal effect as its mode of action depend on its  binds to ergosterol, a major component of the fungal cell membrane forming pores in the membrane that lead to potassium leakage and death of the fungus.

Samples (2 ml) were taken from the receptor compartment and same amount of fresh dissolution medium was added to keep a constant volume at fixed time intervals (0.5, 1, 2, 3, 4, 5, 6, 7, 8 and 24 h). Nystatin in the samples was measured spectrophotometrically at 305.4 nm. The release studies were carried out in triplicate for all formulations and the results were expressed as the mean values ±SD. The release efficiency (R.E.%) for nystatin solid lipid nanoparticles was calculated at 24 hr (Fig. 4 & 5).

Solubility of Nystatin in Lipids: Solubility of drug in lipid is one of the most important factors for determining drug loading capacity of the SLNs. Solubility of nystatin was tested in 5 lipids, precirol ATO5, Geleol, Gelucire, Compritol 888 ATO and stearic acid (Fig. 1). The amount of lipid required to solubilize 10 mg drug was 0.5±0.025, 0.7±0.12, 0.9±0.44, 0.8±0.03 and 1.4±0.055 gm for compritol 888ATO, precirol, geleol, gelucire and stearic acid respectively. From the entire lipid used, this result indicated that nystatin loading capacity of compritol might be more than other lipids and it was chosen for the preparation of SLN. 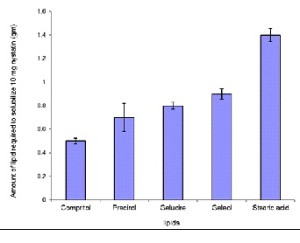 FIG. 3: SOLUBILITY PROFILE OF NYSTATIN IN THE SOLID LIPIDS

Preparation of Nyst-SLNs: Nystatin loaded SLNs dispersions were composed of Compritol with different concentrations 5, 7.5 & 10%(w/w). The lipid based carrier systems were stabilized by 1, 2.5 & 5%(W/W) surfactant (poloxamer 188 or tween 80 or PVA).Nystatin was incorporated with different concentrations 0.125, 0.25 & 0.5% (W/W). Twenty one different formulations were prepared; the composition of the investigated Nyst-SLNs is shown in table 1.

The decrease in nanoparticles size at high surfactant concentrations is due to effective reduction in interfacial tension between the aqueous and lipid phase, leading to the formation of emulsion droplets of smaller size, which on cooling results in smaller nanoparticles 15. As depicted from table 2, all formulations were negatively charged, the zeta potential varied from -18.9mV for F16 to -38.8 mV for F21 indicating a relatively good stability and dispersion quality. It was clear that as the amount of surfactant increased in the formulation, the zeta potential became more negative.

Transmission Electron Microscopy (TEM): Electron micrographs indicate that the prepared SLNs had nanometer-size with no drug crystal formation. Most of the particles were round and uniform in size with smooth surface morphology (Fig. 2). Figure 2(D) illustrates the presence of a layer surrounding the particles of nystatin SLNs. During the lipid solidification process, lipid molecules solidify first to form a lipid core, which results in a high concentration of drug crystallizing on the surface of the particles which explain the drug-enriched-shell theory 20.

Differential Scanning Calorimetry (DSC): Thermal behavior of the pure drug, compritol compared with the thermograms of different lyophilized SLNs formulae in the range of 25 to 350ºC is shown in Fig. 3. Crystalline nystatin demonstrated a sharp endothermic peak at 167.11ºC corresponds to melting temperature of nystatin while sharp endothermic peak at 74ºC was observed for compritol. Absence of the peak at167.11ºC in nystatin loaded SLNs indicates either formation of amorphous dispersion of nystatin in lipid matrix or solubilization of nystatin in lipid matrix upon heating. Similar results were obtained by Das et al., in studying the thermal analysis of tretinoin loaded SLNs and proving the amorphous dispersion and solubilization of tretinoin upon heating 19. 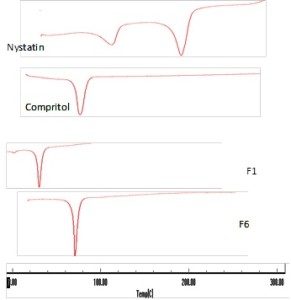 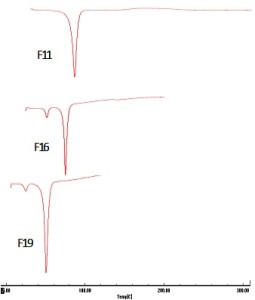 In-vitro Drug Release: The dialysis bag diffusion technique was adopted to evaluate the release of nystatin from the investigated formulations. The dialysis membrane retains the nanoparticles and permitted the transfer of the drug directly into the receiver compartment. Soluble drug was partitioned from the nanoparticles into the liquid phase, and then it diffused into the receptor medium. The data clearly shows that the release of the drug can be influenced by the type and concentration of surfactant, in addition the concentration of lipid matrix used, and the concentration of nystatin used (Fig. 4). 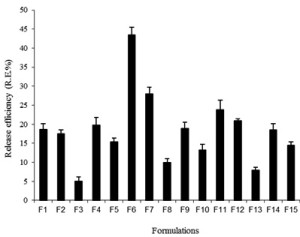 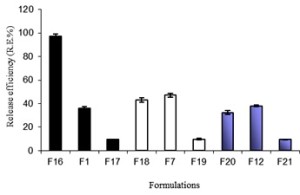 This decrease can be attributed to the higher lipid content encapsulating the drug may cause that the diffusion distance for drug to diffuse out from Solid Lipid Nanoparticles was increased 22. Nystatin is released more quickly when using in lower concentration because of the drug-enriched shell model 23-24. According to the drug-enriched shell model of drug incorporation, a solid lipid core forms when the recrystallization temperature of the lipid is reached. On reducing the temperature of the dispersion, the drug concentrates in the still liquid outer shell of the SLN.

Stability studies:  The stability study was done for 2 formulations: F16 and F20. From table 3, it was found that the particle size of SLNs dispersion show no significant increase , the same was observed for the entrapment efficiency which show also a no significant decrease. Although sustained drug release was observed from both formulations after 2 and 4 months of storage, release was relatively faster from SLNs stored than fresh SLNs (Fig. 6 & 7). This faster release might be due to rearrangement of crystal lattice in the SLN lipid matrix over time, which pushes some of the drug molecules migrate towards nanoparticle surface 19.

FIGURE 6: COMPARISON OF DRUG RELEASE FROM FRESH AND STORED F16

FIGURE 7: COMPARISON OF DRUG RELEASE FROM FRESH AND STORED F20

CONCLUSION: Homogenization followed by ultrasonication method is suitable to produce Nyst-SLNs of 83.26-955 nm size ranges. Lipophilic drug like nystatin can be loaded in the compritol using poloxamer 188 or PVA as surfactants. Tween 80 was unsuitable for the preparation of Nyst-SLNs. The loading of nystatin explain the drug-enriched-shell theory. DSC analysis showed amorphous state of nystatin. Nystatin is released more quickly when using in lower concentration. Stability studies proved that the 2 formulae suggested are stable upon storage.