INTRODUCTION: In the recent years, intelligent polymers have attracted increasing interests due to their potential and biomedical applications such as drug delivery system 1, bio-separation 2, cell culture 3 and enzyme technology 4. The intelligent microcapsule can respond to external stimuli changes such as temperature 5, pH value 6, ionic strength 7, light 8 and electric fields 9, etc. Among the intelligent microcapsules, pH/ temperature sensitive microcapsules have been widely investigated in the biomedical fields due to the easy controlling and applications both in vitro and in vivo conditions 10, 11.

Among the temperature-sensitive polymers, poly (N-isopropylacrylamide) (PNIPAm) is extensively studied owing to the biocompatible property and its lower crystal solution temperature (LCST) around 32°C 12-14, which is close to human body temperature. Therefore, PNIPAm has been widely investigated in order to exploit its biomedical applications.

The pH sensitivity of polymer is usually originated from the introduction of carboxyl (-COOH) or amine (-NH2) groups into macromolecular chains 15.

As a result, acrylic acid (AA), methacrylic acid, vinyl pyridine, aminoethyl acrylylate, and so on are often selected as the comonomers or modifier in the preparation. Among the pH-sensitive polymers, sodium alginate (SA) is a linear polymer comprising 1, 4-linked-β-d-mannuronic acid (M) and α-L-guluronic acid (G) units, combined in blocks of M-M, G-G and M-G 16.

It has been widely used in the food, pharmaceutical, and cosmetic industries due to its biocompatibility, biodegradability, non-toxicity, non-immunogenicity, and acceptance by human body. SA is hydrophilic, absorbing water quickly. Its -COOH and -OH groups participate in hydrogen bonding and van der waals force 17-19.

In this study, the pH/temperature sensitive microcapsules with sodium alginate (SA) and N-isopropyl acrylamide (NIPAm) as wall-forming material were prepared by inverse emulsion polymerization, in which pentoxifylline was used as a model drug and span20 was used as the emulsifier. The effects of the emulsifier content on the particle size distribution and drug release property of microcapsules were discussed in detail. The release behavious of pentoxifylline in different phosphate buffered saline (PBS) pH were investigated systematically. The aim of this study is to gain a better understanding of the sodium alginate grafted N-isopropylacrylamide to preparation microcapsules, which layed foundation for further research on pH/temperature sensitive microcapsules.

2.2. Preparation of microcapsules: 20 ml 1% solution of sodium alginate with 1.8 g N-isopropyl acrylamide, 0.12 g N, N-methylenebis acrylamide and 0.5 g pentoxifylline was prepared by an adequate mixture. The aqueous solution was poured into oily solution with 100 ml white oil and 3 ml Span 20. The mixture was then vigorously agitated at 8000 r/min for 8 min with a homogenizer (BME100L, Shanghai Weiyu Co. China) to obtain w/o emulsion. 30 mL of 0.2% ammonium cerium nitrate aqueous solution was then slowly added into the w/o emulsion. The procedure was carried out at 40 °C with agitation at 100 r/min using a magnetic stirrer (Tokyo Rikakikai Co., Ltd.). Polymerization and microencapsulation were attained with continuous agitation at 100r/min for 5 h. The obtained microcapsule slurry was first washed with ethyl acetate and recentrifuged three times at 9000 r/min for 12 min, and then washed with distilled water to remove free N-isopropyl acrylamide and pentoxifylline on their surfaces, then freezed drying for at least 72 h.

2.3. Characterizations: The IR spectra were recorded with a Fourier transform infrared spectrophotometer (Vector22, Bruker Co., Germany). The sample were ground with dried KBr powder, and compressed into a plate. The KBr plate was scanned by a FTIR spectrophotometer. The morphology of the microcapsules was observed by scanning electron microscopy (SEM, JSM-5400, JEOL, Japan). Microcapsules were sprinkled onto a double-sided tape, sputter-coated with gold and examined in the microscope using the accelerated voltage of 10kV. The internal structure was observed by transmission electron microscopy (TEM, Tecnai G2 F20 S-TWIN, FEI). The microcapsules were dispersed in the water, then remove the well dispersed microcapsules out of the water with a copper mesh which was clipped by a pair of pliers and dry at 50 °C.

The average diameter and size distribution were measured by particle size analyzer (Zetasizer 3000HS, Malvern Instruments, UK). Before measuration, the samples were diluted with hexane at 1:10 volume ratio. The amount of released pentoxifylline was measured by monitoring the optical absorbance at 274 nm using a UV-vis spectrophotometer (UV-2550, Shimadzu Co., Japan).

2.4. In-vitro drug release property: In a flask, the pentoxifylline-containing microcapsules (0.0500 g) were immersed into 100 mL PBS (pH7.6 or 1.2) simulated to the gastric fluid and neutral intestine. The release system was thermostated in a shaking bath at a designated temperature. At scheduled time intervals, 3 mL sample solution was withdrawn from the release medium. The pentoxifylline released from microcapsules was measured by the absorption at 274 nm using a UV-vis spectrophotometer. Then, the measured sample solution was returned to the flask to maintain the unchanged volume. Finally, the amount of the released pentoxifylline from microcapsules was calculated according to the standard calibration curve constructed from a series of pentoxifylline solution with standard concentration 21, 22. 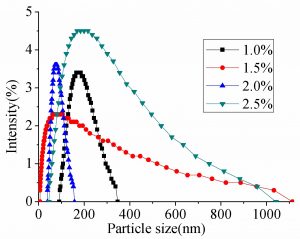 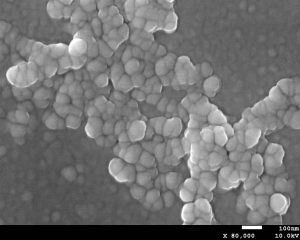 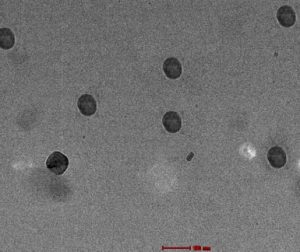 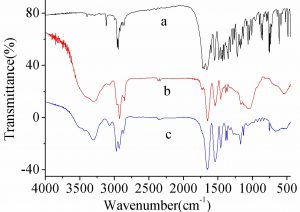 3.4. Effect of pH on the drug release behaviour of microcapsules: As shown in Figure 5, in vitro release, the amount of pentoxifylline release is much higher in alkaline solution than that in acidic solution. This behavior may be attributed to the following fact: the carboxyl groups from the microcapsule wall turned into –COO- form in the pH 7.6 PBS.

The higher repulsion among -COO- groups induced to larger porous size for the drug release, resulting in a higher amountof pentoxifylline release. In pH 1.2 PBS, the ionization of carboxyl groups is low, so the stronger H-bonds between carboxyl groups led to the lower drug release 27. The results showed that these sensitive drug-loaded microcapsules can bypass the acidity of gastric fluid without liberating the substantial drug and release a mass of drug in the small intestine. 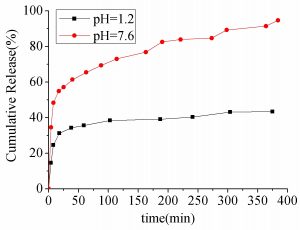 3.5. Effect of temperature on the drug release behaviour of microcapsules: Fig. 6 shows the vitro release properties of pentoxifylline from microcapsules in pH 7.6 at different tenperature. As shown in Fig. 6, the amount of pentoxifylline release is higher at 25°C solution than that at 37°C in the same PBS pH. This behavior may be attributed to the following fact: SA/PNIPAm chains containing hydrophilic amide groups (-CONH-), the stronger H-bonds between -CONH- and water are the main reason to the lower drug release above the polymer phase transition temperature 28. When the microcapsules are heated to a temperature above 32°C, the H-bonds between the microcapsule shell material are break, leading to the contraction of wall-forming material. 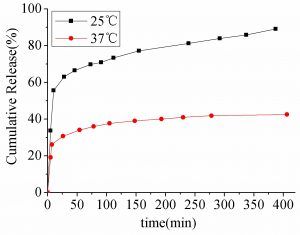 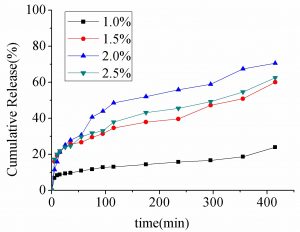 ACKNOWLEDGEMENTS: The authors are grateful for financial support from the National Natural Science Foundation (21274037).