ABSTRACT: The pH-sensitive microcapsules were prepared by interfacial polymerization, in which caffeine was used as a model drug and hyperbranched poly L-lysine (HBPL) and terephthaloyl chloride as wall-forming materials. The microcapsules were characterized by Malvern particle size analysis, scanning electron microscopy, Fourier transforms infrared spectrophotometry (FTIR) and UV-vis spectrophotometer. Triton X-100 was used as the emulsifier of interfacial polymerization. The effects of the emulsifier content on the particle size distribution, loading content, encapsulation efficiency and drug release property of microcapsules were discussed in detail. The release behaviors of caffeine in different phosphate-buffered saline (PBS) pH were investigated systematically. The FTIR analysis of caffeine-containing microcapsules demonstrated that caffeine was successfully encapsulated in the wall-forming materials. The resultant microcapsules had narrower particle size distribution, smoother surface, and higher drug release amount with the percentage weight of emulsifier being 1.5 wt%. The drug-release behavior of caffeine from microcapsules was evaluated as a function of pH. More than 87.1% caffeine was released into pH 7.6 PBS after 100 min, whereas only 37.0% caffeine was diffused out in pH 2.2 PBS over the same time interval. The results indicated that these drug-loaded microcapsules have shown sensitivity to pH value.

INTRODUCTION: Controlled drug-delivery microcapsule is one of the most useful devices to deliver drug, which exhibits a series of advantages compared with conventional drug carriers such as improving the efficiency of delivery, controlling precise dose, improving gastrointestinal tolerance and reducing toxicity, etc. 1-4 Depending on the nature of the components, the microcapsules may be sensitive to pH variance of tissues in the human body.

Moreover, the release rate of the loaded drugs from the microcapsules can be controlled as the microcapsule swells under given pH, and settles at the target sites of effective absorption, and prolongs the duration of activity by selectively adhering of microcapsule 5, 6. Therefore, the design and fabrication of such smart systems have attracted considerable attention in recent years.

The key for the microcapsule preparation is that the organic phase containing a core material is dispersed into fine droplets. And then polymerization is assumed on the surface of the core material to form microcapsules. Hence it is essential to select the adequate emulsifier 9, 10.

Hyperbranched poly-L-lysine (HBPL) is a typical hydrophilic and nontoxic biodegradable polymer. Furthermore, HBPL has primary carboxyl groups having a good sensitivity to pH value. It is well known that the carboxyl group can be only stable in acidic condition. Thus, the Poly-L-lysine-based microcapsules can swell and even collapse with increasing pH. Such pH sensitivity is expected to control the drug release at alvine site 11. In addition, the attention to hyperbranched polymers (HBP) is rapidly growing due to their unique physical and chemical properties such as low viscosity, high solubility and possessing a high density of functional terminal groups to be accessible for chemical modification 12, 13. Therefore, HBPs are attractive for some applications such as drug, cross-linking agents and viscosity modifiers 14, 15. This has prompted us to study microencapsulation by using the materials.

In this work, pH-sensitive microcapsules with HBPL and terephthaloyl chloride as wall-forming materials were prepared by interfacial polymerization, in which caffeine was used as a model drug and Triton X-100 was used as the emulsifier. The effects of the emulsifier content on the particle size distribution, loading content, encapsulation efficiency and drug release property of microcapsules were discussed in detail. The release behaviors of caffeine in different phosphate-buffered saline (PBS) pH were investigated systematically. The aim of the study is to gain a better understanding of the fundamentals of HBPL applied to preparation of pH-sensitive microcapsules, which lays the foundation for further studies of pH-sensitive microcapsules such as its application to the targeted drugs delivery system.

Preparation of Microcapsules: Oily solution with 2.0 g of terephthaloyl chloride and 0.5 g of caffeine dissolved in 20.5 g of chloroform was prepared by an adequate mixture. The oily solution was poured into 57.0 g of an aqueous solution with 2.4 g of PVA224 and the desired amount of Triton X-100 (see Table 1).

TABLE 1: RECIPES OF AQUEOUS PHASE FOR THE O/W EMULSION a PREPARATION

The mixture was then vigorously agitated at 6000 r/min for 7 min with a homogenizer (BME100L, Shanghai Weiyu Co. China) to obtain o/w emulsion. 80.0 mL of 0.4% HBPL aqueous solution was then slowly added into the o/w emulsion. The procedure was carried out at room temperature with agitation at 800 r/min using a magnetic stirrer (Tokyo Rikakikai Co., Ltd.). Subsequently, the temperature was raised to 50 °C. Polymerization and microencapsulation were attained with continuous agitation at 800 r/min for 9 h. The obtained microcapsule slurry was first washed with distilled water and recentrifuged three times at 9800 r/min for 15 min, and then washed with chloroform to remove free caffeine on their surfaces and dried for at least 12 h under reduced pressure at ambient temperature.

Characterizations of Microcapsules: The average hydrodynamic diameter (d) and size distribution were measured by particle size analyzer (Zetasizer 3000HS, Malvern Instruments, UK). Before measurement, the samples were diluted with deionized water at 1:5000 volume ratio. The morphology of the microcapsules was observed by scanning electron microscopy (S-3400n, Hitachi Limited, Japan). The microcapsules were sprinkled onto a double-sided tape, sputter-coated with gold and examined in the microscope using the accelerated voltage of 15.0 kV. The IR spectra were recorded with a Fourier transform infrared spectrophotometer (Varian640, Varian Co., USA). The sample was ground with dried KBr powder, and compressed into a plate. The KBr plate was scanned by an FTIR spectrophotometer. The amount of released caffeine was measured by monitoring the optical absorbance at 272 nm using a UV-vis spectrophotometer (UV-2550, Shimadzu Co., and Japan)

Determination of Microcapsule Encapsulation Efficiency and Loading Content: The microcapsule samples were ground with a mortar and pestle at room temperature. A 5mg of ground microcapsules was added into 25 ml of distilled water, and the mixture was placed in a water bath shaker at 37.0 °C. After 1h, any undissolved the membrane wall of microcapsules was removed by filtration using 0.5 mm membrane filters. Caffeine in the filtrate was measured by the absorption at 272 nm using a UV-vis spectrophotometer. And then the amount of caffeine was calculated according to the standard calibration curve constructed from a series of caffeine solution with standard concentration. The loading content (ø) is defined as the weight of caffeine encapsulated in the 5mg microcapsules. Eventually, the encapsulation efficiency of the microcapsules was calculated by:

In-vitro Drug Release Property: In a flask, the caffeine-containing microcapsules (0.0200 g) were immersed into 100 mL PBS (pH7.6 or 2.2) simulated to the gastric fluid and neutral intestine. The release system was thermostated in a shaking bath at a designated temperature. At scheduled time intervals, 3 mL sample solution was withdrawn from the release medium. The caffeine released from microcapsules was measured by the absorption at 272 nm using a UV-vis spectrophotometer. Then, the measured sample solution was returned to the flask to maintain the unchanged volume. Finally, the amount of the released caffeine from microcapsules was calculated according to the standard calibration curve constructed from a series of caffeine solution with standard concentration. 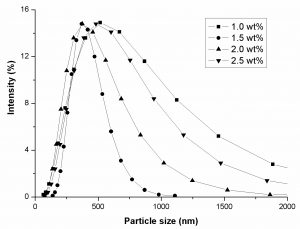 The changing of the encapsulation efficiency and loading content also confirmed the above explanation. Those differences in the particle size distribution and loading content and encapsulation efficiency will affect other properties of microcapsules. The SEM image of the emulsifier content of 1.5 wt% was shown in Fig. 2. As showed in Fig. 2, the microcapsule revealed smooth surface and spherical shape. 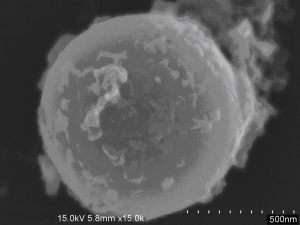 Structure of Microcapsules: FTIR Spectroscopy results for the samples are shown in Figure 3. Fig. 3a corresponds to No.2 caffeine-containing microcapsules and Fig. 3b and Fig. 3c to caffeine and the No.2 shells that were prepared in the same way as the hybrid systems without the addition of caffeine, respectively. 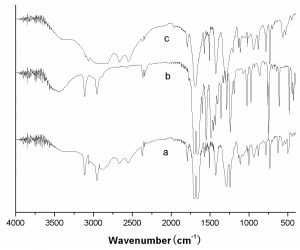 FIG. 3: FTIR SPECTRA OF (A) CAFFEINE-CONTAINING MICROCAPSULES, (B) CAFFEINE AND (C) THE SHELLS MADE FROM HBPL / TEREPHTHALOYL CHLORIDE

The results confirm that the shells of the microcapsules are composed of terephthaloyl chloride and UHBL as expected. In addition, as shown in the spectrum of Fig. 3a and Fig. 3b, the peak at 2954 cm-1 is attributed to the－CH3 stretching of caffeine, indicating that caffeine is encapsulated in the microcapsules 17.

Effect of pH on the Drug Release Behaviour of Microcapsules: Fig. 4 shows the in vitro release properties of caffeine from No.2 microcapsules in different PBS pH at 37.0 °C. As shown in Fig. 4, the amount of caffeine release is much higher in alkaline solution than that in acidic solution. It could be seen that only 37.0% of caffeine was released from microcapsules within 100 min in pH 2.2 PBS, whereas 87.1% caffeine was diffused into pH 7.6 PBS. This behavior may be attributed to the following fact: the carboxyl groups from the microcapsule wall turned into –COO- form in the pH 7.6 PBS. The higher repulsion among –COO- groups induced to larger porous size for the drug release, resulting in a higher amount of caffeine release 20. At the same time, in the acidic medium, caffeine may form a kind of organic salt in the release process, because caffeine is an organic basic compound. The salt of caffeine spreads slowly when compared with the pure caffeine molecules, which also bring about a slower delivery of caffeine in acidic medium. In addition, this is probably related to the ionization of carboxyl groups from the membrane wall of microcapsules. 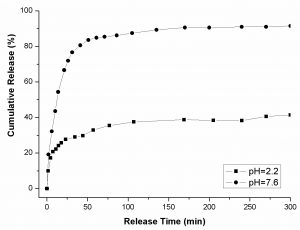 In pH 2.2 PBS, the ionization of carboxyl groups is low, so the stronger H-bonds between caffeine and carboxyl groups led to the lower drug release. The results showed that these sensitive drug-loaded microcapsules can bypass the acidity of gastric fluid without liberating the substantial drug, and release a mass of drug in the small intestine. As a result, these drug-loaded microcapsules can be applied in the targeted drugs delivery system. 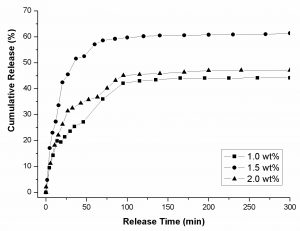 CONCLUSION: The pH-sensitive microcapsules were synthesized by interfacial polymerization, in which caffeine was used as a model drug and hyperbranched poly L-lysine and terephthaloyl chloride as wall-forming materials. The FTIR analysis of caffeine-containing microcapsules demonstrates that caffeine is successfully encapsulated in the polyamide matrix. The resultant microcapsules have narrower particle size distribution, smoother surface, higher encapsulation efficiency, and loading content and higher amount of caffeine release with the percentage weight of emulsifier being 1.5 wt%. The drug-release behavior of caffeine from microcapsules was evaluated as a function of pH. More than 87.1% caffeine was released into pH 7.6 PBS after 100 min, whereas only 37.0% caffeine was diffused out in pH 2.2 PBS over the same time interval.

ACKNOWLEDGEMENT: The authors are grateful for financial support from the Medical Discipline Construction Foundation of Hebei University (2012A3002).