INTRODUCTION: In recent years, considerable research efforts have been directed towards the use of naturally derived materials in various medicinal, biomedical as well as pharmaceutical applications 1-11. Amongst these naturally derived materials, herbal medicines have been recognized as the most important remedy in the traditional medicine system all over the world by the people to treat various diseases since antiquity 12-18.

According to World Health Organization (WHO 1993), a major fraction (almost 80 %) of the global population is dependent on the traditional medicine systems with the use of extracts derived from plant parts like leaves, pods, bark, fruits, seed, roots, exudates, etc 12, 19 - 20.

Moreover, these herbal medicines are cheap, safe and devoid of side effects on long term use 18-21. Extensive survey of the ethnomedicinal and phytochemical literature reveals that numerous herbal extracts have already been studied for their anti-microbial activities against many microbial infections 22-25.

Pterospermum acerifolium willd (family, Sterculiaceae, commonly known as ‘Kanak champa’) is a shrub distributed in tropical Asia 26. It is a popular ornamental plant having wide range of medicinal properties 27. Various part of P. acerifolium plant is used for the treatment of different diseases like conjunctivitis, anorexia, dysmenorrheoea and fever. P. acerifolium is also reported as bitter, acidic, anti-inflammatory, analgesic, sedative, carminative, digestive, antimicrobial, anthelmintic 26, 28 - 33. Extensive survey of literature reveals the fact that very little work has been done in the direction of its use as antibacterial through topical gels. No topical gel formulation yet is prepared using this herbal drug towards the antibacterial dermatological treatment. Therefore, in the present work, attempt has been taken to develop topical gels containing aqueous extract of P. acerifolium seeds and also to evaluate the prepared gels against some Gram-positive and Gram-negative bacteria.

Collection and authentification of plant material: Seeds of P. acerifolium were collected in the month of January, 2009, from the hill area near the bank of Subarnarekha River in the district of Mayurbhanj, Odisha. The collected plant with complete herbarium was authenticated at Botanical survey of India, Central National Herbarium, Botanical Garden, Howrah, Kolkata (vide Letter No. CNH/1-1(15)/2009/Tech 11/413). Also a sample specimen was deposited there.

Preparation of Extract: 1 kg of the air dried seeds of P. acerifolium was reduced to fine powder and extracted using Soxhelet apparatus with petroleum ether, ethanol and purified water up to 30 siphons each one after another. Each extract was concentrated using a Rota evaporator. The marc left after extraction was dried in an air oven below 30°C.

Microorganism: The microorganisms were obtained from the microbiological laboratory of Dept. of Pharmaceutical Technology, Jadavpur University, Kolkata. The details about the micro organism are shown in Table 1.

TABLE 1: DETAILS ABOUT THE MICROORGANISMS USED IN THE CURRENT STUDY

MIC of each extract was determined by cube dilution method. 10 Test tubes for each extract per microorganism were thoroughly washed and sterilized. 0.5 ml of test solutions (7.8 mg/ml to 1000 mg/ml) was taken in 8 test tubes. 0.5 ml of freshly prepared and sterilized nutrient broth & 0.5 ml 6 % DMSO was added to each of 8 test tubes. Test tubes were thoroughly shaken. To each test tube, 50 mg of 24 hours sub culture of bacteria was added and shaken properly. The 9th test tube contained 0.5 ml of nutrient broth & 0.5 ml 6 % DMSO and 50 mg of sub culture of bacteria to act as positive control and 10th test tube contained 0.5 ml of nutrient broth &1 ml of 6 % DMSO to act as negative control. All the test tubes were incubated in an incubator (Remi Corporation, India) at 37 °C for 24 hours and observed for turbidity comparing with both the controls. Same procedure was adopted for all extracts and all the three bacteria.

Determination of Zone of Inhibition: Zone of inhibition was determined for each extract at a concentration of 1000 mg/ml and compare to that of standard ciprofloxacin 5 mg/disc by disc diffusion method. Agar plates were made by pouring nutrient agar suspension (sterilized) in cleaned petridish to get 4 mm thickness (approx). Plates were kept under laminar air flow.

Stock solution of each extract 100 mg/ml were prepared by dissolving the extract in 6 % DMSO, paper disc (Whatman® No. 1) of 6 mm diameter were cut and sterilized in hot air oven. 10 ml (1000 mg/disc) of each extract was taken in a sterile pipette and soaked in paper disc. The disc was dried. The discs were carefully kept on the agar media and slightly pressed for proper fixing. Standard disc of ciprofloxacin (5 mg/disc) was taken and placed on the media and fixed properly. The plates were incubated at 37°C for 24 hours. Plates were observed for zone of inhibition.

pH measurements: The pH of the gels was measured by using digital pH meter (Systronics Instruments, India). The glass electrode was completely dipped into the gel system so as to cover the electrode and the pHs of gels were measured within 5 min.

Determination of extrudability: It is a useful empirical test to measure the force required to extrude the material from a bottle or tube since the passing of gels have gained a considerable importance in the delivery of desired quantity of gel from collapsible tubes. Therefore, the measurement of extrudability becomes an important criterion for gels. While not strictly a test of product characteristics due to inclusion of force necessary to deform the whitener the method applied is for the determination of applied shear in the region of the rheogram corresponding to the shear rate exceeding. The yield value was exhibiting. Consequent plug flow on such apparatus is described by Wood et al., 35. The gels were filled in standard capped collapsible tubes and sealed by crimping the ends. The weight of tube was recorded. The tube was placed between two glass slides and was clamped. A 500 gm weight was placed over the glass slide and then the cap was removed. The amount of gel extruded was collected and weighted.

Lower slide was fixed on a wooden plate and the upper one was tied to a hook having a balance at the other end in which a weight was kept in order to pull that slide. Five gram of gel was uniformly placed on the lower slide and the upper slide was placed on it. A one kilogram weight was kept on the slides for five minutes to expel the entrapped air. The excess discharged gel was carefully scrapped off. A weight of 80 gm. was kept on the balance. The time in seconds required to separate the slides completely was noted. Less time indicates more slip and better spreadability. The experiments were repeated thrice and mean value was taken.

Spreadability is calculated using the formula:

RESULTS AND DISCUSSION: Topical gels are semisolid formulations, which have gained a greater deal of importance in the medical field for their topical effect in the treatment of pain, strain, inflammation, infections and other diseases 36 - 40. In the current work, topical herbal gels containing aqueous extract of P. acerifolium seeds was developed using sodium carboxymethyl cellulose. The antibacterial potential of these formulated herbal gels were also investigated against Escherichia coli, Pseudomonas aeruginosa and Staphylococcus aureus. MIC of P. acerifolium seed extracts was determined by cube dilution method. It was observed that all the seed extracts showed MIC ranging from 31.25 to 1000 mg/ml (Table 3). The aqueous extract showed lowest MIC value against all three bacteria. The aqueous extract was found to possess MIC value of 31.25 mg/ml, against E. coli and S. aureus. Against P. aeruginosa, it was 125 mg/ml. From the above observation, it was clearly concluded that aqueous extract of seeds showed lowest MIC value.

In order to evaluate the antibacterial activity of extracts having MIC up to 1000 mg/ml, disc diffusion method was adopted and zone of inhibition was recorded. The antibacterial sensitivity of extracts and that of standard (ciprofloxacin) were compared. Aqueous extract of P. acerifolium seeds at 1000 mg/disc showed higher zone of inhibition against P. aeruginosa (22 mm) than that of S. aureus and E. Coli (17 mm) while comparing to ciprofloxacin (standard, 5 mg/disc) (32 – 36 mm). Other extracts showed less zone of inhibitions. Thus, antibacterial screening of P. acerifolium seed extracts by disc diffusion method finally showed comparatively higher antibacterial potential in case of aqueous extract of seeds and hence, it was taken for further formulation study.

Prepared herbal gels of aqueous P. acerifolium seed extract prepared using 4.5% sodium carboxymethyl cellulose were tested for pH, viscosity, extrudability and spreadability. pHs of these gels were within the range between, 6.28 – 7.30. Viscosities of these herbal gels were measured within 42000 – 52000 cps. It was observed that gel containing 15 % aqueous P. acerifolium seed extract showed good extrudabilty in comparison with other formulated gels. The spreadability of these gels was found almost similar. From these results, it can be suggested that the gel containing 15% aqueous extract exhibited satisfactory extrudability and spreadability. The extrusion of gels from the collapsible tube is important during application; whereas, spreadability plays an important role in helping of uniform application of gels. A good gel takes less time to spread and should have high spreadability. 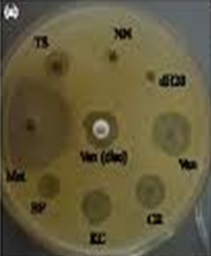 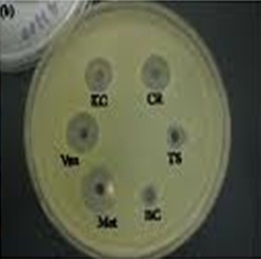 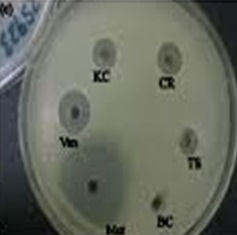 CONCLUSION: Extracts from P. acerifolium seeds were tested for antibacterial activity against some Gram-positive and Gram-negative bacteria like E. coli, P. aeruginosa and S. aureus. MIC (by cube dilution method) and zone of inhibition (by disc diffusion method) of aqueous P. acerifolium seed extracts exhibited comparatively higher antibacterial potential in comparison with that of other extracts. On the basis of it, topical herbal gels containing aqueous extract of P. acerifolium seeds were formulated using 4.5 % sodium carboxymethyl cellulose as gel base and evaluated for their antibacterial potential against E. coli, P. aeruginosa and S. aureus. pHs and viscosities of these gels were within the range, 6.28 – 7.30and 42000 – 52000 cps, respectively. Gel containing 15 % aqueous extract exhibited satisfactory extrudability and spreadability. All the prepared gels were subjected to antibacterial study by determining zones of inhibition disc diffusion method. Herbal gels containing 15 % aqueous P. acerifolium seed extract exhibited better zones of inhibition against E. coli, P. aeruginosa and S. aureus in comparison with that of 5 % and 10 %. From the results of this study, it can be concluded that herbal gels containing 15 % aqueous P. acerifolium seed extract was found suitable for topical use against bacterial infections. It can be suggested that before its commercialization, the gel formulations should be subjected to detailed clinical studies using animals as well as human subjects. Also, extensive accelerated stability studies should be examined.