PREPARATION AND EVALUATION OF EXTENDED-RELEASE MICROSPHERES OF QUETIAPINE FUMARATE

PREPARATION AND EVALUATION OF EXTENDED-RELEASE MICROSPHERES OF QUETIAPINE FUMARATE

ABSTRACT: The objective of present study was to develop extended release microspheres of quetiapine fumarate using Eudragit RS 100 and Eudragit RL100 to reduce the dosing frequency. The quetiapine fumarate-loaded Eudragit microspheres were formulated by a solvent evaporation method. A 32 factorial design was employed to study the effect of concentration of sodium lauryl sulfate (SLS) and drug: polymer ratio on percentage yield, percentage entrapment efficiency, particle size, and % in-vitro drug release at 10 h. Drug excipients compatibility study by DSC showed no interaction between drug and excipients. The entrapment efficiency was found to be 40.56 ±1.32  % to 72.66 ±2.13  %, and the particle size range was 165±3.51 µm to 243±3.05 µm. In-vitro drug release of quetiapine fumarate microspheres showed a sustained release up to 24 h. Concentration of SLS and drug: polymer ratio had signiﬁcant effect on % yield, % entrapment efficiency, particle size and % in-vitro drug release. From all parameters and experimental design evaluation it was concluded that drug release rate decreased with an increase the drug: polymer ratio and a decrease in the amount of SLS. The scanning electron microscopy (SEM) study observed that microspheres were spherical and fairly smooth surfaces. The in-vitro release kinetics revealed Korsmeyer -Peppas model is followed, and drug release is by fickian diffusion.

Quetiapine fumarate has mean elimination half life of 6 h and hence there is a need for twice or thrice daily administration.  Hence, quetiapine fumarate is considered a very good candidate for extended drug delivery to increase patient compliance and reduce the dosing frequency 4. Microspheres are the one methods of extended drug delivery system.

Microspheres are defined as “Monolithic sphere or therapeutic agent distributed throughout the matrix either as a molecular dispersion of particles 5. It can also be defined as structure made up of continuous phase of one or more miscible polymers in which drug particles are dispersed at the molecular or macroscopic level with particle size range of 1-100 µm 6, 7, 8. Microspheres are one of the multiple unit dosage forms. Microspheres are a useful approach that significantly prolongs drug effect duration and improves patient compliance 9. Eudragit are biocompatible copolymers synthesized from acrylic and methacrylic acid esters. Usually, it uses to modify the drug release for delayed-release formulation (Eud L), protecting from an ambient condition or taste masking (Eud E), or as a material for sustained release formulation 10, 11. They have also been used in the microencapsulation of drugs. Eudragit RL is insoluble but permeable to water and digestive juices, releasing the drug by diffusion. The solvent evaporation method is widely preferred for preparing sustained-release microspheres 12. This study aimed to prepare eudragit microspheres containing quetiapine fumarate by solvent evaporation method to achieve an extended drug release profile and to study the effect of different formulation variables such as concentration of sodium lauryl sulfate (SLS) and drug: polymer ratio on percentage yield, percentage entrapment efficiency, particle size and its in-vitro release behavior.

Drug and Excipient Compatibility Study by Differential Scanning Calorimetry (DSC): The DSC study was carried out using DSC-60 (Shimadzu Corporation, Japan). The samples were heated in sealed aluminum pans under airflow (30 ml/min) at a scanning rate of 10°C/min from 50 to 300°C. An empty aluminum pan was used as a reference. The heat flow as a function of temperature was measured for the samples 13.

Preparation of Microspheres: Eudragit RS 100 and Eudragit RL100 were dissolved in 20 ml Dichloromethane: methanol mixture (1:1).  400 mg drug was dispersed in an above polymer solution. Above drug-polymer solution was added dropwise with the help of syringe into 100 ml SLS solutions and continuously stirred using a mechanical stirrer for 2 h at 1500 rpm until the organic solvent evaporated. The prepared microspheres were filtered by using a vacuum filter. The collected microspheres were dried at room temperature 14, 15.

Experimental Design: In this design, 2 factors were evaluated at 3 levels, and experimental trials were performed using all possible 9 combinations. In this present study, the concentration of SLS (X1) and drug: polymer ratios (X2) were selected as independent variables.

The % yield, % entrapment efficiency, particle size, and % in-vitro drug release at 10 h were selected as dependent variables. A statistical model incorporating interactive and polynomial terms was used to evaluate the response.

Where Y is the dependent variable, b0 is the arithmetic mean response, and b1 and b2 are the estimated coefficient for the factor X1 and X2, respectively. The main effect (X1 and X2) represents the average result of changing one factor at a time from its low to high value.

The interaction term (X1X2) shows how the responses change when two factors are changed simultaneously. The polynomial terms (X12, X22) are included to investigate nonlinearity 13 Table 1 & 2.

Percentage Entrapment Efficiency: 25mg of microspheres were crushed in mortar pastel, dispersed in 50 ml 0.1N HCl solution, and then sonicated for 10 min by sonicator. Then this dispersion was allowed to rotate in an incubator for 24 h and permitted to pass through Whatman ﬁlter paper. A UV spectrophotometer assayed the net content of the drug after suitable dilution at λmax 289 nm 1.

In-vitro Drug Release: In-vitro drug release studies for the prepared microspheres were conducted for a period of 24 h using USP rotating paddle apparatus (Electrolab Dissolution Tester (USP) TDT- 08L) at 37±0.5oC and 100 rpm. The in vitro drug release study was performed in 900 ml 0.1 N HCL pH 1.2 for 2 h and 900 ml phosphate buffer pH 6.8 for 3 to 24 h. At every interval 5 ml of sample was withdrawn from the dissolution medium and replaced with fresh medium to maintain the volume constant. After filtration the sample solutions were analyzed at 289 nm for quetiapine fumarate by a UV-Visible spectrophotometer 1.

Surface Morphology: Morphological characterization of the microspheres was carried out by using scanning electron microscopy. Using double-sided carbon tape, a monolayer of dry microspheres was mounted on an aluminum slab. Using a sputter coater, the sample was coated with a 10 nm thick gold film. Coated samples were examined using an electron acceleration voltage of 10 KV.

Drug Excipient Compatibility Study by DSC: DSC of the quetiapine fumarate Fig. 1 and quetiapine fumarate + Eudragit RS100 + Eudragit RL100 mixtures Fig. 2 show an endothermic peak at 177.37 °C and 175.36°C, respectively. There was no change in the melting endotherm of the drug and drug-polymers mixture. So, it was concluded that drugs and polymers were compatible.

Result of Batches of Quetiapine Fumarate Microspheres: Results of quetiapine fumarate microspheres are shown in Table 3. 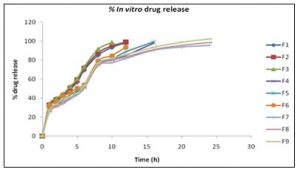 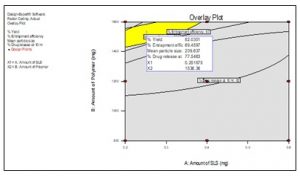 Evaluation of optimized batch (F0): Fig. 4 shows the yellow area was the optimized area, and batch F0 fell in the yellow region.

In-vitro Release Kinetic Studies of Optimized Batch: The release kinetic of the formulation was checked by fitting the release data to various kinetic models which is shown in Tabel 9. The release was best fitted to the Korsmeyer-Peppas model. Here, n value was 0.4484, so the release mechanism was Fickian diffusion-based 24. Surface Morphology of an optimized batch of microspheres was carried out by SEM studies. From Fig. 6, it was observed that the shape of microspheres seems to be spherical with fairly smooth surface.

CONCLUSION: Quetiapine fumarate microspheres were prepared successfully by solvent evaporation method and provided a extended-release up to 24 h. The concentration of SLS and drug: polymer ratio significantly affected various parameters like percentage yield, percentage entrapment efficiency, particle size, and % in-vitro drug release. It was found that increasing the drug: polymer ratio resulted in an increased Percentage yield, entrapment efficiency, and particle size. Here % the drug release rate was decreased with increasing the polymer concentration and decreasing concentration of SLS. The optimized batch (F0) showed the drug release at 78.67% at 10 h and 99.34 at 24 h. The SEM study observed that microspheres were spherical and had fairly smooth surfaces. The release pattern quetiapine fumarate fit the Korsmeyer- Peppas model indicating Fickian diffusion. This also suggests that extended released microspheres of quetiapine fumarate can be a good alternative to conventional therapy and reduce the dosing frequency.