Zidovudine is the first approved compound for the treatment of HIV; however the main limitation to therapeutic effectiveness of Zidovudine is its dose dependent toxicity, short biological half-life and poor bioavailability. Thus, to overcome the problem the gastroretentive floating drug delivery system is developed. Floating drug delivery system is a low density system which have capacity to remain buoyant on gastric fluid in the stomach without affecting gastric emptying rate for prolonged period of time. The objective of present investigation was to developed hollow microsphere drug delivery system of Zidovudine using Eudragit S100 as polymer by novel O/W emulsification solvent diffusion technique. The hollow microspheres was evaluated for in-vitro buoyancy, micromeritic properties, particle size, percentage yield, entrapment efficiency, drug-polymer compatibility, scanning electron microscopy and in-vitro drug release. The prepared hollow microspheres were floated more than 12hrs on 0.1N HCl. The percentage yield and entrapment efficiency were found to be in range of 86.66% to 52.22% and 86.60% to 72.9%, respectively. The hollow microspheres were found to be regular in shape and highly porous. The release rate was determined on 0.1N HCl at 37oC. The formulation demonstrated favorable in-vitro release characteristics. The data obtained for the designed system thus suggest that the dosing frequency of zidovudine thus can be reduce as well as increase the biological half-life which will subsequently improve the bioavailability.

INTRODUCTION: The main goal of drug delivery systems is to achieve desired concentration of the drug in blood or tissue, which is therapeutically effective and non toxic for a prolonged period. The pointing of the goal is towards the two main aspects regarding drug delivery, namely spatial placement and temporal delivery of a drug. Spatial placement means targeting a drug to a specific organ or a tissue while temporal delivery refers to controlling the rate of drug delivery to that specific organ or a tissue. An appropriately designed sustained or controlled release drug delivery system can be a solution towards solving these problems 1.

Control release implies the predictability and reproducibility to control the drug release, drug concentration in target tissue and optimization of the therapeutic effect of a drug by controlling its release in the body with lower and less frequent dose 2, 3.

Zidovudine, the first anti-HIV compound approved for clinical use is widely used for treatment of AIDS either alone or in combination with other antiviral agents. Zidovudine is typically administered orally as a capsule. The bioavailability after oral administration is only 60% due to an extensive hepatic first-pass metabolism, which requires the administration of a high dose of the drug 4.

The mean plasma Elimination half‐life is 0.5‐2.9hrs 5, which requires the frequent administration of the drug. However, the main limitation to therapeutic effectiveness of Zidovudine is its dose-dependent hematological toxicity; patients receiving AZT frequently develop anemia and leucopenia 6. After oral administration, it is rapidly absorbed from the gastrointestinal tract (GIT) exhibiting a peak plasma concentration of 1.2μg/mL at 0.8 hours 7.

Zidovudine has all the requisite characteristics suitable for developing floating drug delivery system, which includes low bioavailability, dose dependent toxicity, and its short half life. Hence, Hollow microspheres were prepared to improve the Bioavailability and decrease dosing frequency.

Materials: Zidovudine was obtained as a gift sample from Smruthi Organics Ltd. Eudragit S100 was supplied by Degussa Pharmaceutical Ltd. All ingredients and solvents used were of analytical grade.

Preparation of Floating Microspheres (Table 1): Weighed amount of Zidovudine was mixed with Eudragit-S 100 (in ratios of 1:1, 1:2, 1:3, 1:4 & 1:5) in a solution of Dichloromethane and Ethanol (1:1) at room temperature. Glyceryl Monostearate was added as the emulsifying agent. The resulting drug-polymer solution was poured gradually into 200ml of water containing 0.75% Zidovudine and 0.75%w/v polyvinyl alcohol, maintained at constant temperature of 40oC and the preparation was stirred at 300rpm for one hour. The finely developed microballoons were then filtered, washed with water and dried overnight at 40oC .

Particle size: The particle size of the microspheres was measured using an optical microscope and the mean particle size was calculated by measuring 100 particles with the help of a calibrated ocular micrometer 10.

Angle of Repose: It is the maximum angle possible between the surface of pile of powder and the horizontal plane. The angle of repose was determined by the fixed funnel method. The accurately weighed powders were taken in a funnel. The height of the funnel was adjusted in such a way that the tip of the funnel just touched the apex of the heap of the powder. The powder was allowed to flow through the funnel freely onto the surface. The diameter of the powder cone was measured. The angle of repose was calculated using the following equation.

Density: The Bulk Density (BD) and Tapped Density (TD) of microspheres were determined. Two grams of microspheres was introduced into a 10 ml calibrated measuring cylinder. After noting down the initial volume, the cylinder was allowed to fall under its own weight onto a hard surface from the height of 2.5 inch at 2 seconds intervals. The tapping was continued until no further change in volume was noted. BD and TD were calculated using following equations.

Volume of microspheres after Tapping

Hausner’s Ratio: Hausner’s ratio of the microspheres was calculated by using following formula,

Carr’s Index: The Carr’s index of microspheres was determined by following equations

Porosity: The porosity of the floating microspheres was determined by the following equation:

Drug Loading and Entrapment Efficiency: The drug loading was calculated from following equation. For the determination of drug entrapment efficiency, accurately weighed the quantity of 50 mg of microspheres. Crushed it by using mortar and pestle, add the crushed powder into 100ml volumetric flask. Then add some quantity of double distilled water to the volumetric flask and sonicate the resulting solution for 30 min. on Ultrasonicator. Further make up volume with double distilled water. Make up the suitable dilutions of resulting solution so that to obtained the solution of desired drug concentration. The drug entrapment efficiency was measured spectrophoto- metrically at 266 nm for Zidovudine.

Weight of Drug in Microspheres

Actual amount of Drug in Microspheres

Theoretical amount of Drug in Microspheres

In-vitro Drug Release: The drug release was studied using a USP dissolution apparatus type II at 100 rpm in 0.1N HCl solution as dissolution medium (900 ml) maintained at 37±5°C. A sample (10 ml) of the solution was withdrawn up to 12 hour from the dissolution apparatus hourly and the samples were replaced with fresh dissolution medium. The samples were filtered and diluted to a suitable concentration with 0.1N HCl solution. Absorbance of these solutions was measured at 266 nm using UV spectrophotometer. Percentage drug release was calculated using an equation obtained from a standard calibration curve.

Evaluation of stability of Microballoon Capsules: The acceleration stability test was carried out according to the Technical Standard of Drug Stability Test (Ch. P appendix XIX C). When packaged in hard gelatin capsule shell, the microballoon capsules were stored at 40±20C, RH 75% ±5% for 1 month in case of the accelerate stability examination, and sampled at days 1, 15 and 30. All the physical properties, % buoyancy ratio after 12 hour and % drug loading amount of all samples in both studies were determined according to the above method.

In- vitro Buoyancy: The in-vitro buoyancy test was carried out to investigate buoyancy of prepared microspheres. The formulations (F1 to F5) floating ability is shown in table 2. Result also showed that longer the size of microsphere more the ability to float. 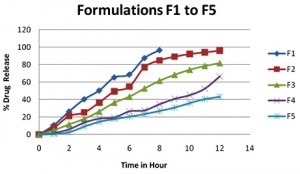 Accelerated Stability Studies: Stability of preparation is an important factor to estimate the quality of the dosage forms. Thus accelerating testing was carried out to study on stability of Zidovudine  loaded microballoons (as shown in Table 4). The results showed no marked change in physical properties (color, surface morphology and particle flow) and no significant difference in floating ratio and drug loading was observed in comparison with the Zidovudine loaded microballoons capsules before storage in stability chamber. 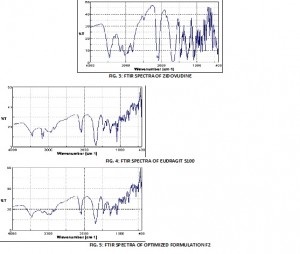 ACKNOWLEDGEMENT: I would like to thank Matrix Lab., Nashik and Evonik Degussa Ltd. Mumbai for providing gift sample of Zidovudine and polymer respectively. I am especially thankful to Department of Microbiology, P.S.G.V.P.M’s Arts, Science and Commerce, Shahada for utilizing the facilities.