Categories Menu
Home » PREPARATION AND EVALUATION OF MICROSPHERES OF FLURBIPROFEN

PREPARATION AND EVALUATION OF MICROSPHERES OF FLURBIPROFEN

PREPARATION AND EVALUATION OF MICROSPHERES OF FLURBIPROFEN

ABSTRACT: Microsphere drug delivery systems have used to improve patient compliance, decreases toxicity, and increase efficacy. Also, the use of microspheres to deliver drugs has many other merits, like control-release of the drug, increase bioavailability and target delivery of the drug to the desired site. In this research shows the utility of encapsulating hydroxypropyl methyl cellulose (Methocel K4M) in biodegradable microsphere delivery system, to be delivered orally via a capsule, to gives desired therapeutic action. Microsphere formulations have advantage over conventional tablet or capsule formulations, since it increases the surface area exposed to the absorption site and thus increasing the absorption of the drug and decreasing the dosing frequency of the drug. Flurbiprofen is a non-steroidal anti-inflammatory agent which is used widely in various colon diseases ulcerative colitis, Crohn’s disease, carcinomas and infections. Flurbiprofen shows maximum absorption in the lower gastrointestinal tract regions, and shows half life 4 - 5 h, it shows low bioavailability orally. The microsphere formulations were evaluated for its production yields, actual drug content, encapsulation efficiency, % Swelling Index release study is done by in vitro release analysis.

Controlled Release Dosage Forms: Controlled release drug delivery (CRDD) has become the norm in dosage form design and intensive research has been undertaken in achieving better drug product effectiveness, reliability and safety. Controlled drug delivery system is the one, which delivers the drug at a predetermined rate, locally or systemically, for a specified period of time. It releases the bioactive agent (drug) over an extended period of time, the dosage form can control the rate of release of the incorporated bioactive agent & maintained constant drug concentration at biophase: target tissue or cell 1, 2, 3.

Controlled drug delivery occurs when a polymer, whether natural or synthetic, is judiciously combined with a drug or other active agent in such a way that the active agent is released from the material in a predesigned manner. The purpose behind controlling the drug delivery is to achieve more effective therapies while eliminating the potential for both under and overdosing. Other advantages of using controlled-delivery systems can include the maintenance of drug levels within a desired range, the need for fewer administrations, optimal use of the drug in question, and increased patient compliance. While these advantages can be significant, the potential disadvantages cannot be ignored the possible toxicity or non bio-compatibility of the materials used, undesirable by-products of degradation, any surgery required to implant or remove the system, the chance of patient discomfort due to the delivery device, and the higher cost of controlled-release systems compared with traditional pharmaceutical formulations 4, 5.

a) Preparation of Dope Solution: Sodium Alginate was dissolved in distilled water at specific concentration; the solution was stirred thoroughly after drug added.

b) Preparation of Coagulation Solution: Homogeneous aqueous solution of chitosan and calcium chloride in various ratios were prepared. The gelation medium was prepared by dissolving chitosan in 1% glacial acetic acid. Solutions mixed for 2 hr’s before use and pH of Coagulation fluid adjusted 4.5 ± 0.1. The homogenous alginate solution was extruded using a 22G syringe needle into the coagulation / gelation medium. The distance between the edge of the needle and the surface of the gelation medium was about 10 cm. The gel microspheres formed were left in the solution with gentle stirring for specific time at room temperature to be cured. After microspheres were collected, washed with distilled water twice and oven-dried subsequently (40 °C) 6.

Procedure for Preparation of Drug loaded Sodium Alginate Microspheres: The weighed amount of sodium alginate was dissolved in water. The amount of sodium alginate was added in various percentages (2.0% - 4.0%), stirred for 1 h using mechanical stirrer (Remi equipments, Mumbai). The weighed amount of flurbiprofen was dispersed in to polymeric solution and stirred for 30 min. and then allowed to stand in sonicator till the removal of entrapped air bubbles. After sonication, this solution was added dropwise from the distance 5 cm using syringe fitted with needle (22G) in to coagulation fluid 200 ml consisting of calcium chloride solution (3%) and chitosan (0.5 - 1.5) dissolved in 1% acetic acid in 250 ml beaker kept on magnetic stirrer at room temperature. Microspheres were left for curing for specified time and after curing, microspheres were collected by filtration and washed twice with distilled water and allowed to dry at 40 ºC for 24 h. The dried microspheres were weighed and stored for further evaluation 7, 8, 9, 10, 11, 12, 13.

Percentage Drug Content and % Entrapment Efficiency: 14- 20 An accurately weighed quantity of 10 mg microspheres were taken and crushed in mortar with pestle and dissolved in 10 ml of phosphate buffer. The resultant suspension was centrifuged 3600 rpm for 30 min. The solution was sonicated for 2 - 3 h using sonicator (Citizen). The resultant dispersion was filtered through Whattman’s filter paper (no. 041) and analysed at 270 nm using UV spectrophotometry (Shimadzu, 1800). The experiments were done in triplicate and results were calculated.

B) % Entrapment Efficiency: The encapsulation efficiency was calculated according to the following relationship.

Equilibrium Swelling studies: 20, 21, 22, 23 The accurately weighed dried microspheres were placed in USP dissolution apparatus II containing 900ml, phosphate buffer (pH 6.8) maintained at 37 ± 2 ºC and allowed to swell upto constant weight. The microspheres were removed, blotted with filter paper, and changes in weight were measured. The experiments were carried out in triplicate. The degree of swelling (Swelling index) was then calculated from the formula,

In-vitro Dissolution Studies: 7, 8, 9 In-vitro dissolution studies were performed for all the formulation using USP XXIII Dissolution test apparatus II (paddle type). An accurately weighed sample of microspheres containing 150 mg of flurbiprofen drug was dropped into 900 mL of 0.1 N HCl pH 1.2 maintained at a temperature of 37 ºC ± 0.5 ºC and stirred at a speed of 50 rpm.

At different time intervals, a 5 mL aliquot of the sample was withdrawn and the volume was replaced with an equivalent amount of plain dissolution medium kept at 37 ºC. After 2 h same procedure was done into phosphate buffer 6.8 pH. The collected samples were filtered using Whattman’s filter paper (No.041) and analyzed at λmax 247 nm using a UV-visible spectrophotometer against 0.1N HCl and phosphate buffer 6.8 pH as blank. The results expressed were the mean of three experiments.

Surface Morphology of the Microspheres: 20, 23 The external surface morphology and their internal cross section image of optimized batch of microspheres were obtained by scanning electron microscope (SEM, Philips XL20, Holland) under vacuum. The samples for SEM were prepared by mounting dried microspheres on a double adhesive tape stuck to an aluminium stub.

The stubs were then coated with platinum to a thickness of about 10 Å under an argon atmosphere using a gold sputter module in a high-vacuum evaporator. Afterwards, the stubs containing the coated samples were placed in the scanning electron microscope (JSM-6360A, JEOL and Tokyo, Japan) chamber. The samples were then randomly scanned and photomicrographs were taken at the acceleration voltage of 10 kV.

FIG. 1: DISSOLUTION PROFILE OF A TO I FORMULATIONS

One formulation, chosen as optimal from A to I batches, were also evaluated for % drug content, equilibrium % swelling index, sphericity. The formulation that fulfilled maximum requisites because of better drug entrapment efficiency, microspheres size and controlled release of the drug was F. 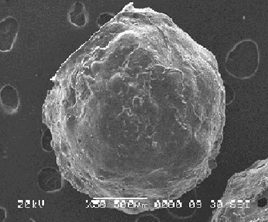 And controlled the release from 86.79% to 70.76 % but at the same time drug entrapment efficiency of microspheres increases drug: polymer ratio also showed significant effect on drug entrapment efficiency, drug release and particle size of microspheres. As drug: polymer (sodium alginate) ratio increases from 1.5:3to 1.50:4 the % drug release decreases from 92.74 % to 83.00% due to leaching of drug in to counterion solution. Chitosan, a natural polymer which get degraded in acidic environment, non toxic. Flurbiprofen loaded chitosan microspheres were prepared by using ionotropic gelation technique.

CONCLUSION: The sodium alginate and chitosan microspheres of flurbiprofen prepared by ionotropic gelation method. Optimization helped to predict the best possible formulation. In-vitro release study of F indicated that flurbiprofen was released in controlled manner up to 24 h.