PREPARATION AND EVALUATION OF MUCOADHESIVE MICROCAPSULES OF SODIUM VALPROATE

PREPARATION AND EVALUATION OF MUCOADHESIVE MICROCAPSULES OF SODIUM VALPROATE

Mucoadhesive microcapsules of sodium valproate, an anticonvulsant  used in the treatment of epilepsy and in migraine, have been prepared from sodium alginate, hydroxypropylmethyl cellulose-K4M, carbopol 934P & sodium CMC using 10% w/v calcium chloride solution by ionic gelation method. Drug: polymer ratios were 1:1 in all the formulations and polymer mixtures employed were 4:1, 5:1, 6:1, 7:1 of sodium alginate: polymer (hydroxypropyl methyl cellulose-K4M, carbopol 934P & sodium CMC). Calcium chloride was used for ionic gelatin and cross linking of sodium alginate molecules. Microcapsules were spherical in shape and of sizes between 798 microns to 952 microns. Carbopol 934P was found most effective in controlling drug release from microcapsules followed by sodium CMC. Drug release found to be best from the formulation developed with carbopol 934P and followed Super case II transport.

INTRODUCTION: Microencapsulation by various polymers and its applications are described in standard text books and journals 1, 2. Microencapsulation is a suitable technique to achieve controlled release and drug targeting. The main aim of an oral controlled drug delivery should primarily aim at achieving more predictable and increased bioavailability of a drug. The major absorption Zone(upper part of the intestine), can not provide complete drug release followed by absorption ,from the drug delivery system due to rapid transit of the delivery system throughout the zone leading to  less bioavailability  from the drug delivery system .

An attempt has been made for mucoadhesion of the drug delivery system in the upper part of the intestine to make intimate contact and increase duration of contact between the drug delivery system and underlying mucus layer, resulting in prolongation of drug release, increased absorption and enhancement of bioavailability of the drugs 3-6. These considerations have led to the development of oral controlled release microcapsules with mucoadhesive properties. Alginate is easily gelled by the addition of calcium chloride solution to an aqueous solution of sodium alginate, since insoluble calcium alginate will be formed by cationic exchange between Na+ and Ca2+.

The gelation and cross linking are due to stacking of the glucoronic acid (G) blocks of alginate chains with the formation of egg-box–like structure. Alginate microcapsules are non toxic, have a protective effect on mucous membrane of upper GIT and have property of re-swelling so they can act as controlled release systems. Sodium valproate is a generally used in the treatment of epilepsy and in migraine. It acts by increasing gamma-aminobutyric acid levels in the brain or by altering the properties of voltage dependent sodium channels.

It has an oral bioavailability of 50% because of its high first-pass metabolism, and its elimination half life is 10-15 hours.

Therefore, it is a suitable candidate for the design of mucoadhesive microcapsules to effectively reduce dosing frequency.

Preparation of Microcapsules- Orifice Ionic Gelation Method 4: Coating materials (sodium alginate) and mucoadhesive polymers (HPMCK4M, Carbopol 934P, sodium CMC) were dissolved in distilled water (40 ml) to form a homogeneous mixture. The core material, sodium valproate (1000mg) was added to the polymer solution with the help of magnetic stirrer to form a viscous dispersion. The resulting dispersion was added dropwise with the help of a needle size (20 gauze) into the 50 ml calcium chloride solution (10%w/v). The added droplets are retained in the solution for 60 minutes for curing to produce microcapsules. Then the microcapsules were filtered and washed with distilled water to remove the extra calcium chloride retained and dried at 50oC for 12 hours. The prepared microcapsules were kept in the desiccator for further use. The compositions of the formulations are given in Table 1.

TABLE 1: COMPOSITION OF THE FORMULATIONS

Analytical Method 7: Estimations of   sodium valproate at pH 1.2, 6.8, 7.4 were done at absorption maxima at 217 nm using UV spectrophotometer (SHIMADZU) in the concentration range20 to100 ppm with the help of standard curve.

Evaluations and Characterization of Microcapsules:

Determination of Flow properties of Microcapsules:

Angle of Repose 8: Angle of repose has been used as indirect method for quantifying microcapsules flowability, because of their relationship between interparticular cohesion and surface adhesion. It was measured according to fixed funnel standing method.

Carr¢s index 9: compressibility value or Carr’s index value of microparticles were computed according to the following equation;

Hausner’s ratio 9: was found to be related to interparticular friction and such can be used to predict the flow properties of the microcapsules. It is measured by comparing the tapped density to the bulk density using following equation.

Angle of repose, bulk and tapped density, Carr’s index, Hausner’s ratio have been measured which are given in Table 2.

Scanning Electron Microscopy of the Formulation 11: The microcapsules were coated with gold by using Emitech K550X coater. After fixing the sample in individual stabs, samples were examined for the surface and internal structure of the microcapsules by using scanning electron microscope which is given in fig. 1. The outer surface is round, rough, fractured and wavy in nature. 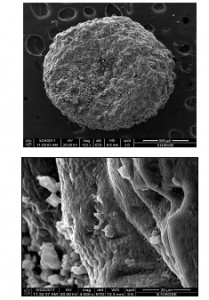 In vitro wash-off test for mucoadhesion 4: The mucoadhesive property of the microcapsules was evaluated by an in vitro adhesion testing method known as the wash-off method. Freshly excised pieces of intestinal mucosa (4x5cm) from sheep were mounted onto glass slides (3x1 inch) with cyanoacrylate glue. Two glass slides were connected with a suitable support. About 50 microcapsules were spread onto each wet rinsed tissue specimen, and immediately thereafter the support was hung onto the arm of a USP tablet disintegrating test machine.

When the disintegrating test machine was operated, the tissue specimen was given a slow, regular up-and-down movement in the test fluid (400 ml) at 37OC contained in a 1000 ml vessel of the machine. At the end of 1 hr, and at hourly intervals up to 10 hr, the machine was stopped and the number of microcapsules still adhering to the tissue was counted. The test was performed both in simulated gastric fluid (pH 1.2) and simulated intestinal fluid (pH 7.4 phosphate buffer). The data of test are shown in Table 4.

The in vitro studies were performed at two different pH values; (i) 1.2 (simulated gastric fluid), (ii) 7.4 (simulated intestinal fluid). An accurately weighed sample responded in dissolution media consisting 900 ml of 0.1 N (pH 1.2) HCl and the dissolution was done for two hours. At the end of two hours, 28.062 gm of disodium hydrogen phosphate and 10.305 gm of potassium dihydrogen phosphate with 0.171 gm of sodium chloride were added to change the pH upto 7.4 and after that the study was performed for 14 hrs.

The samples (5ml) were withdrawn at each hour interval and replaced with same volume of medium and the withdrawn samples were diluted if required and then estimated for sodium valproate concentration at 217nm spectrophotometrically (by using UV/VISIBLE Double Beam Spectrophotometer Shimadzu). Finally, the drug content in all fluids was determined from the calibration curve of sodium valproate. Drug releases in cumulative percentages from different formulations versus time were compared which are given in fig. 2-4. 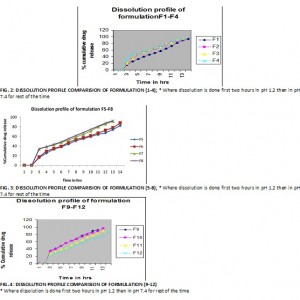 Drug Release Mechanism 13, 14, 15: To describe kinetics of drug release from the controlled release microcapsules, mathematical models, such as zero order, first order and Higuchi square root of time model, Korsmeyer and Peppas equation were used, when the release mechanism is not well known or when more than one type of release phenomena could be involved.

The criteria for selecting most appropriate model were based on goodness of fit test. Korsmeyer and Peppas equation: Mt/Mα = Ktn, where Mt/Mα is the fraction of drug released at time t,K=constant incorporating of structural and geometric characteristic of controlled release device. n=diffusional release exponent indicative of release mechanisms. The best fit model was determined statistically employing comparison of correlation coefficients. The drug release rate from the formulations and the respective half lives were calculated.  The preparation of graphs and statistical calculations were carried out with the help of computer.

Infrared Spectroscopy (IR): Infrared spectrum was taken in the Perkin Elmer (spectrum RX -1) by scanning the sample in potassium bromide (KBr) discs. Before taking the spectrum of the sample, a blank spectrum of air back ground was taken. The sample of pure drug, pure polymers and the mixtures containing both the drug and polymers were scanned separately and plotted with the help of Bruker software. No interaction between the drug and polymer was found as evident from analysis of characteristics peaks.

CONCLUSION: Microcapsules were spherical in shape and of good flow properties with mucoadhesion upto 8 hours. Carbopol was most effective to control the release of the drug. Drug release mostly followed zero order and Super case II transport.

There was no interaction between drug and excipients. Microcapsules were stable at 30oC in dry atmosphere.