ABSTRACT:Oral controlled drug delivery systems represent the most popular form of sustained drug delivery systems for the obvious advantages of oral route of drug administration. Such systems release the drug with constant or variable release rates. The oral controlled release systems shows a typical pattern of drug release in which the drug concentration is maintained in the therapeutic window for a prolonged period of time (sustained release), thereby ensuring sustained therapeutic action. They are used as single dosage form. Present work involves preparation and evaluation of sustained release of microspheres of Norfloxacin employing sodium alginate as natural polymer. The technique employed for microencapsulation of the drug is ionotropic gelation.

INTRODUCTION: A dosage form is the physical form of a dose of a chemical compound used as a drug or medication intended for administration or consumption. Common dosage forms including tablet, capsule, pill, emulsion, aerosol etc. Notably, the route of administration (ROA) for drug delivery is dependent on the dosage form of the substance in question.3

Various dosage forms may exist for a single particular drug, since different medical conditions can warrant different routes of administration. For example, the problem of persistent nausea and emesis or vomiting may make it difficult to use an oral dosage form, and in such a case, it may be necessary to utilize an alternate route such as the ones prevalent now-a -days as inhalational, buccal, sublingual, nasal, suppository, or parenteral instead.6

Additionally, a specific dosage form may be a requirement for certain kinds of drugs, as there may be issues with various factors like chemical stability or pharmacokinetics. As an example, insulin cannot be given orally because upon being administered in this manner, it is extensively metabolized in the gastrointestinal tract (GIT) before reaching the blood stream, and is thereby incapable of sufficiently reaching its therapeutic target destinations.

Attempts to maintain a steady level of medication using biodegradable polymers have recently attracted considerable attention. Because, these polymers are biodegradable, they do not require retrieval after the medication is exhausted.

Therefore, they can be fabricated into microspheres, microcapsules or nanospheres, with the drug encapsulated in them. Various microencapsulation techniques for incorporating a bioactive agent into a microparticle carrier are there 1.

Microparticles are particles between 0.1 and 100 μm in size. One can encounter microparticles everyday, such as pollen, very fine sand, and dust. Microspheres are spherical microparticles, and are used as carriers of pharmaceutical substances 3.

However, rapid initial release of the drug, commonly referred to as burst release, is often observed immediately after administration of microparticle delivery systems. Release of the agent from a microparticle delivery system comprises an initial burst release from the surface of the device. Much higher than normal therapeutic levels of medication in the blood resulting from the burst effect of a microparticle system are undesirable because they often cause side effects such as nausea, vomiting, delirium and, sometimes, death. Similar situations can occur when the polymer matrix is catastrophically eroded.

Some of the advantages of using microparticles as sustained  release  drug delivery systems are an effective protection of the active agent against degradation ( e.g., enzymatic) after encapsulation 1. The possibility to accurately control the release rate of the incorporated drug over periods of hours to months an easy administration (compared to the parenteral controlled release dosage forms such as macro-sized implants). Desired, pre-programmed drug release profiles can be provided which match the therapeutic needs of the patient 2.

A polymer is a large molecule composed of many smaller units that are bonded together. In addition to eliminating the necessity of removal, the five key advantages  that polymeric drug delivery products can offer are; localized delivery of drug, sustained delivery of drug, stabilization of the drug, release rate which is less dependent of the drug propertiesand steadier release rate with time 10. A large number of both natural and synthetic polymers have been studied for possible application in drug delivery. The great advantage of synthetic polymers is their advantageous properties and wide choice availability. Both of them are biodegradable and forms copolymers with natural macromolecules.

On the other hand, natural polymers have the advantage of high biocompatibility and less immunogenicity. Among the natural polymers   studied a special mention has to be made to collagen, and gelatin. Other natural polymers include chitosan, alginate, starch, pectin, casein and cellulose derivatives 4. The principle of gelation is based on the formation of tight junction between the glucoronic acid residues of sodium alginate. Number of apparent cross-linking points formed within the Calcium alginate gel beads increase with increased alginate concentration.

The increase in the apparent cross-linking density delays the alginate gel disintegration in phosphate buffer due to retardation of calcium-ion (Ca++) exchange with sodium (Na+) and eventually leads to the increase of lag time.

Ionotropic gelation is based on electrostatic interaction between amine groups of polymer and negatively charged group of polyanion. Chemical reaction between sodium alginate and calcium chloride is utilized in micropellet formation. The gelation of alginate is caused by formation of an egg box junction to associate divalent metal ions of alginate polymer chain. Sodium alginate has been used as matrix material to achieve a control release drug delivery due to its hydrogel formation properties. Gelation of an anionic polysaccharide, sodium alginate, was achieved with oppositely charged counter ions i.e. Ca++ to form microparticles which are further sustained using a divalent polymer.

Mode of Action: Norfloxacin is a broad spectrum antibiotic that is active against both gram positive and gram negative bacteria by causing cell membrane protein lysis and preventing bacterial reproduction. They act by inhibiting DNA Gyrase and are mainly potent against gram negative bacteria.

Use: In proven cases of bacteria induced uterine tract infections.

Microbiology: Norfloxacin has in-vitro activity against a broad range of Gram positive and Gram negative aerobic bacteria such as Escherichia coli, Staphylococcus aureus and Pseudomonas aeruginosa.

Steps involved in the general preparation of Microparticles by Ionotropic Gelation Technique: 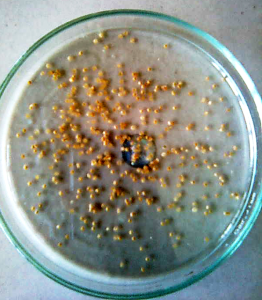 Preparation of Standard curve of Norfloxacin: 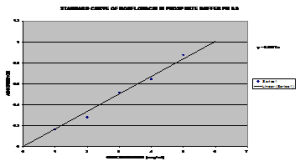 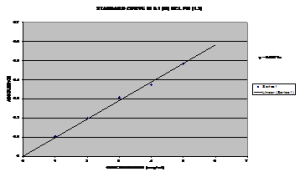 Three formulations of microparticles (A1, A2 & A3) were prepared in identical manner only changing the amount of calcium chloride in these as respectively 1% w/v, 2% w/v & 3% w/v. These three formulations were subsequently subjected to evaluation tests.

Evaluation Tests: The micropellets/microparticles of Norfloxacin, prepared by the method of ionotropic gelation are subjected to the following evaluation tests namely,

Method:  The in-vitro dissolution study was carried out using six station dissolution rate apparatus USP at 50 rpm AT 37±0.5oC. The dissolution medium consists of simulated intestinal fluid for 5 hours. 5ml of the fluid containing the micropellets in the apparatus were removed every 30 minutes and an equivalent amount of fresh dissolution equilibrated at the same temperature was replaced. The sample withdrawn was diluted, filtered and analyzed at 278nm spectrophotometrically. The plot of percentage cumulative drug release against time (hrs) is given as under (table 1-3, graph 1-3). 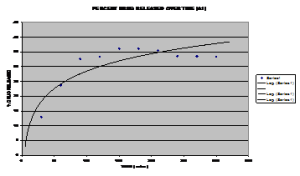 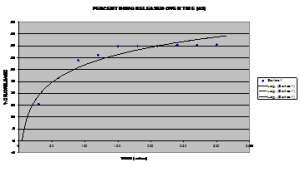 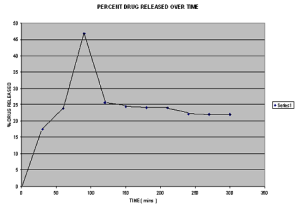 GRAPH FOR DISSOLUTION STUDY OF A3

Drug Entrapment Efficiency: Accurately weighed microparticles equivalent to 20 mg and suspended in 250 ml of simulated intestinal fluid pH=6.8 and kept for 24 hours. Next day, stirred for 5 minutes and filtered. After suitable dissolution, drug content was analyzed spectrophotometrically at 278 nm (table 4). Then Drug Entrapment Efficiency (%) was determined through formula;

Absorbance values of 20 mg of dissolved formulations at 278 nm.

Swelling Index: About 10mg of the prepared micropellets (A1, A2 and A3) were taken and dissolved in a sufficient quantity of phosphate buffer pH 6.8. The initial weight is measured and followed by the swelled weight after dipping the microparticles in the buffer solution.

Susceptibility Test: Dilution Technique for the determination of Minimum Inhibitory Concentration (MIC) of the antibiotic drug against the test organism like E. coli, S. aureus and P. aeruginosa. Quantitative methods are used to determine antimicrobial MICs. These MICs provide estimates of the susceptibility of bacteria to antimicrobial compounds. 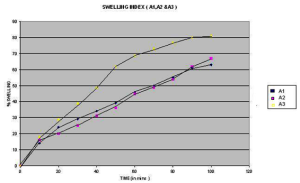 RESULTS & DISCUSSION: Chemical reaction between sodium alginate and calcium chloride to form calcium alginate was utilized for formulation of microspheres. A1 & A2 exhibited similar swelling profiles whereas A3 show greater swelling compared to other two formulations. The cultures of Escherichia coli were found to be sensitive to the microparticles of Norfloxacin in the formulations. A2 formulation showed best sustained release amongst the three formulations releasing about 40.51 % in 5 hrs.

CONCLUSION: Sustained release microparticles were successfully prepared employing ionotropic gelation technique where the natural water soluble polymer, namely, sodium alginate prolongs the release of the drug. The method of preparation was found to be simple and without the use of organic solvents. Micropellets prepared are spherical in shape and having a porous surface.

The Drug Entrapment Efficiency of formulation A2 prepared with 2%w/v calcium chloride showed the best result of around 55 %. This could have been further improved upon by the use of co-polymers. The micropellets were found to be effective in sustaining the drug release with the formulation A2 releasing around 40.51 % drug in 5 hours. Drug release is diffusion controlled and follows first order kinetics. The process of drug release from the polymer-dry matrix is through gelation of the polymer.

Swelling studies showed A3 getting swelled up fastest while A2 exhibited least swelling and this fact is corroborated with the faster dissolution of formulation A3 and the sustained release effect shown by A2 in the In-vitro Dissolution study.

The antibiotic sensitivity test performed through determination of MIC (Minimum Inhibitory Concentration) of Norfloxacin revealed the antimicrobial nature of this antibiotic drug against strains of E. coli, S. aureus even in low concentrations ranging in mcg/ml limits.