ABSTRACT: Cinnarizine was microencapsulated with Eudragit RS100 using an o/o and o/w emulsion solvent evaporation technique. The effects of three formulation variables including the drug: polymer ratio, emulsifier (polyvinyl alcohol) concentration and volume of external medium on the entrapment efficiency and microspheres size distribution were examined. The drug release rate from prepared microspheres and the release kinetics were also studied. The results demonstrated that microspheres with good range of particle size can be prepared, depending on the formulation components. The drug: polymer ratio had a considerable effect on the entrapment efficiency. However, particle size distribution of microspheres was more dependent on the volume polyvinyl alcohol concentration rather than the drug: polymer ratio. The release kinetics was also studied and it was shown that the release profiles of all formulations showed good correlation with the korsmeyer model of release.

Pharmaceutical products intent for oral; delivery which are currently available in the market mostly are immediate- release or conventional release, which maintains the drug concentration within the therapeutically effective range only even administered several times a day. This results in a significant fluctuation in the drug level 1, 2. “Microencapsulation is defined as the application of a thin coating to individual core materials that have an arbitrary particle-size range from 5 to 5000 μm” 3, 4.

The microparticulate delivery systems include mainly pellets, microparticles, lipospheres and macroemulsions. The nanoparticulate delivery systems contain mainly lipid or polymeric nanoparticles, microemulsions, liposomes, cochleates, and nonionic surfactant vesicles (niosomes). APIs can be embedded inside a polymeric/proteinic coat or matrix network in either a solid aggregated state or a molecular dispersion, resulting in the formulation of microcapsules or microspheres, respectively. The term sustained release dosage form was used to identify drug delivery systems that are designed to achieve a prolonged therapeutic effect by continuously releasing medication over an extended period of time after administration of a single dose 5, 6.

Cinnarizine is a (diphenylmethyl)-4-(3-phenylprop-2en-1-yl) piperazine derivative, water insoluble drug It has a short plasma half-life of 1–3 h following oral dosing , which makes it necessary to be administered frequently in order to maintain desired concentration.

Therefore, it is an ideal candidate for a sustained release multiple unit preparation, which results in more reproducible drug absorption and reduces the risk of local irritations compared to single unit dosage forms, due to uniform spreading in the gastrointestinal tract. A few studies have been performed on microencapsulation of ibuprofen using different processes. The objective of this study was to prepare and characterize the cinnarizine microspheres obtained by the aqueous emulsion solvent evaporation technique. The effect of different formulation variables on the microspheres properties was also investigated throughout this study 7, 8, 9.

Cinnarizine microspheres were prepared by based on an o/o emulsion solvent evaporation technique using Eudragit RS as a polymer. Eudragit RS100 and cinnarizine were co dissolved in a mixture of acetone (2 ml) and methanol (5 ml). Then magnesium stearate was dispersed in polymer drug solution.

The dispersion was then poured drop wise using 10 ml plastic syringe with an 18G × 11/2 needle into light liquid paraffin (50 ml), contained in a beaker (250 ml) at a low stirring speed (500-1000 rpm). After complete addition, the stirring speed was increased and its rate was maintained (1500-1800 rpm) for 3 h till all the acetone and methanol were evaporated.

Then n-hexane (20 ml) was added for hardening of the microspheres and to accelerate settling. Microspheres were separated by filtration and were then washed three times with n-hexane (10 ml) to remove any traces of liquid paraffin adhering to the surface. The washed microspheres were dried in oven maintained at 50°C for 24 h and were stored in desiccators until used. Composition of microspheres prepared by o/o solvent evaporation method as shown in Table 1.

The microspheres were prepared by o/w solvent evaporation technique. The drug and polymer were dissolved in a mixture of dichloromethane and methanol (3:1) at room temperature. The drug solution was poured into 70 ml of water containing 0.25%, 0.15% and 0.1% w/v polyvinyl alcohol (PVA) for batches. Then the solution was stirred at a speed of 300 - 500 rpm with a propeller agitator and magnetic stirrer for 50 minutes at 30 – 40°C as control temperature.

The finely dispersed droplets were solidified in the aqueous phase via diffusion and evaporation of solvent. These solidified microspheres were recovered, washed with water and dried in desiccators for 12 h. Composition of microspheres prepared by o/w solvent evaporation method as shown in Table 2.

The X-ray diffraction patterns were recorded using XPERT-PRO diffractometer with Cu Kα filter generated at 45kV voltage and 40mA current over a diffraction angle of 2θ.

Microspheres (equivalent to 2 mg of cinnarizine) were dissolved in 10 ml of methanol and volume makes up to 50ml with 0.1 N HCl in a 50 ml volumetric flask by vigorous shaking. Then 1 ml of the above solution was taken and diluted up to 10 ml using 0.1N HCl and absorbance was determined spectrophotometrically at 253.5 nm. Drug content was calculated using calibration curve developed in 0.1N HCl.

USP type II dissolution apparatus was used for studying the drug release properties of microspheres. Microspheres equivalent to 75 mg of cinnarizine were taken in muslin cloth and tied on the paddle which was suspended in the media under test. The test was carried out in 0.1N HCl (900 ml) equilibrated at 37±0.5ºC. The paddles were rotated at 100 rpm. 5 ml of dissolution media was withdrawn at specific time points and replaced with 5 ml of fresh dissolution medium. The collected samples were analyzed spectrophotometrically at 253.5 nm for the absorbance. Using calibration curves developed in respective media concentrations were calculated. Dissolution release profiles were plotted with percentage drug released at different time intervals.

The release kinetics was evaluated considering four different models including zero order, first order and Higuchi equation and korsmeyer and the selection was based on the comparisons of the relevant correlation coefficients. The release rate constants (k), calculated based on the best model 10, 11, 12. Mathematical representation of models used to describe release profile from microspheres as shown in Table 3.

DSC thermogram of pure CIN showed a sharp endothermic peak at 123.98ºC corresponding to the sharp melting point and representing the typical crystalline nature of cinnarizine shown in (Fig. 3a). DSC thermogram of eudragit RS100 with a broad peak at 60.09ºC, attributed to desolvation of water molecules. Absence of sharp peak indicates the amorphous form of eudragit RS 100 as shown in (Fig. 3b). DSC thermogram of physical mixture showed (Fig. 3c) no change in the endothermic peak of CIN. This represented that there was very less to no chemical incompatibility between drug and the polymer. The thermal curve of Eudragit RS100 loaded cinnarizine microspheres showed characteristic peak at 115.06°C as shown in (Fig. 3d) with decreased intensity showing the presence and stability of cinnarizine during the encapsulation process.

From the FTIR study it was found that some of the peaks of the drug were shifted broadened and some vanished. There is no significant shift in the major peaks as shown in (Fig.4d). This confirms presence of cinnarizine in microspheres.

indicating that CIN has been molecularly dispersed within the microspheres. The X-RD data of Eudragit RS100 loaded CIN microspheres.

In vitro dissolution study of the microspheres, were conducted in 0.1N HCl and dissolution data is given in Table 5. The dissolution profiles for all batches were constructed as shown in Fig.1.

The mechanism responsible for the release of cinnarizine from the polymeric microspheres under consideration may be due to diffusion phenomenon, due to degradation effects, or due to combination of both.

Scanning electron photomicrographs of CIN at different magnification (100X and 270X) taken and are shown in Fig 2a and Fig 2b. The SEM picture displays that cinnarizine exist as oblong column shaped crystals and hence confirmed its crystalline nature 4. Scanning electron photomicrographs of the final batch (P4b) are shown in Fig 2c. Microspheres produced were discrete, spherical in shape and appeared to have coarse surfaces. At higher magnification (Fig. 2d), drug crystals were not visible on the surface of microspheres which proved that the drug had been completely dispersed in the polymer matrix and had undergone a phase transition from crystalline to amorphous state. 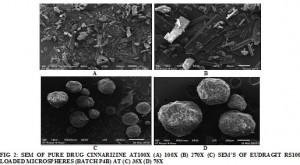 Each value is average of three independent determinations with standard deviation 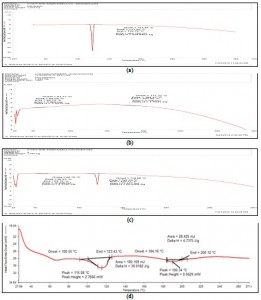 Fig.9) and drug release rate can be predicted as a function of same variable (e.g. time) are mentioned below in Table 6 and Table 7. The mechanism responsible for the release of cinnarizine from the polymeric microspheres under consideration may be due to diffusion phenomenon, due to degradation effects, or due to combination of both. 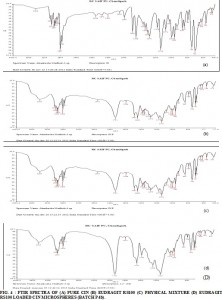 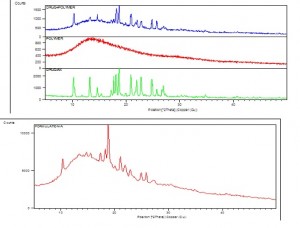 The best fit with the highest correlation was shown in (Table 8) korsemeyer, than first order and followed by higuichi equations in the formulations (P1, P2, P3c, P4a, P4b, P4c) as given in table 8. According to Korsmeyer and Peppas model, n values of the batches (P1, P2, P3c, P4a, P4b, P4c) were 0.307, 0.344, 0.381, 0.477, 0.536, and 0.402 respectively. The n values of P1, P2, P3c and P4c were less than 0.45 which indicated that the release comply case I or fickian diffusion, which may be due to the leaching of drug by the eluting medium. The batches P4a and P4b contained highest amount of polymer and were having n value >0.45 which is an indicator that the microspheres tends to changing the mechanism of transportation of drug from case I or fickian diffusion to anomalous behavior or non-fickian transport. This suggests that some level of swelling and dissolution of matrix must be operating within the system causing deviation from the fickian release. 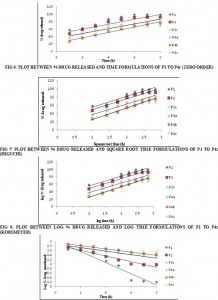 Surface morphology of prepared P4b batch was studied using SEM which proved the formation of spherical, non-aggregated microspheres. DSC studies of the selected batch P4b also showed a similar characteristic peak as that of pure cinnarizine with decreased intensity showing its stability during the encapsulation process. Further XRD analysis showed that there was a considerable decrease in the crystallinity of the drug in the formulation P4b and no interaction was found between drug and polymer.

The release studies of prepared batch P4b in 0.1N HCl showed slow release of the drug. It was found that the release of drug from selected formulations followed non-fickian or anomalous release, n = 0.536 indicates case II release. Eudragit RS100 was dominated by non-fickian and class II mechanism (n> 0.45). That is why, poor correlation values were obtained for kinetic parameters based on zero order model (r value was 0.971). Correlation coefficients were also poor (r value was 0.989) for the kinetic parameters based on Higuchi’s square root equation. However, considering the good fitting of the release data with Korsmeyer model (r value 0.990), it can be concluded that the effect of diffusion on drug release was more than the effect of polymer relaxation. In addition, significant control over the rate of drug released from the system in 8 h could be achieved.

AKNOWLEDGEMENT: The author wishes to thank Wing’s Pharmaceuticals Pvt. Ltd., Baddi for gift sample of Cinnarizine. Insufficient words to express my gratitude to Evonik Degussa India Pvt Ltd, Mumbai, for gift sample of polymer. The author also offers special thanks to Loba Chemie Pvt. Ltd. for providing various chemicals without which the present work would not have been completed.