PREPARATION AND IN-VITRO CHARACTERIZATION OF FLOATING MICROSPHERES OF NATEGLINIDE

PREPARATION AND IN-VITRO CHARACTERIZATION OF FLOATING MICROSPHERES OF NATEGLINIDE

Gastric residence time of oral controlled release system such as microspheres is increase by different techniques such as floating and mucoadhesive system. The objective of present investigation was to formulate floating microspheres of Nateglinide in order to increase gastric residence time, increased bioavailability and to reduce dose frequency of drug molecule. Novel o/w emulsion solvent diffusion technique was used to prepare microspheres of Nateglinide by using various polymers such as HPMC, Ethyl cellulose and Eudragit S100. Entrapment efficiency of drug was upto 69%. Eudragit S100 based microspheres which were found to be hollow cavity, spherical and porous nature from the results of scanning electron microscopy. Micromeritic profile of prepared microballoons was found satisfactory. From the results of FTIR spectroscopy it was reveal that there is no drug- polymer interaction. Eudragit S100 based microspheres shows good in vitro buoyancy and sustained release profile for longer period of time > 14 hours. The formulation had followed first order kinetics as its release mechanism was diffusion controlled.

INTRODUCTION: Oral controlled release dosage forms have been developed over the past few decades due to their considerable therapeutic advantages such as ease of administration, patient compliance and flexibility in formulation. Microspheres carrier systems made from the naturally occurring biodegradable polymers have attracted considerable attention for several years in sustained drug delivery 1-3.

However, the success of these microspheres is limited owing to their short residence time at the site of absorption. It would, therefore, be advantageous to have means for providing an intimate contact of the drug delivery system with the absorbing membranes. The floating microspheres have been developed in order to overcome frequent dosing to release the drug slowly into the GIT.

To control over the GRT the prolonged gastric retention is important because this helps to retain the controlled release system in the stomach for a longer period of time in a predictable manner  4. Moreover, release the active ingredients at a sustained release rate in a larger area in the stomach is to reduce high regional concentration and risk of drug burst release compared to the single unit dosage forms 8.

At present, microspheres are considered to be one of the most promising floating systems, because they combine the advantages of multiple unit systems and good floating properties 9. The floating microspheres were prepared by the emulsion solvent diffusion– evaporation technique. These systems are also called “microballoons” due to their low-density core 10, 11, 12.

Nateglinide acts as an agonist at peroxisome proliferator-activated receptors (PPARs) in target tissues for insulin action, such as adipose tissue, skeletal muscle, and liver. Nateglinide has all the required characteristics suitable for developing an FDDS. Hence, floating microspheres were prepared to improve the bioavailability and to achieve steady-state plasma concentration of the drug. Biodegradable anionic acrylic resin Eudragit S100, Ethyl cellulose and HPMC has been used for microencapsulation of therapeutic drugs to release of drug in controlled manner 13, 14.

The objective of present study was to fabricate microsphere by using o/w emulsion–solvent diffusion technique in order to prolong the gastric residence time, in addition to enhance bioavailability and decrease the dose frequency of Nateglinide. The influence of several factors such as the particle size, drug entrapment efficiency, floating properties and dissolution of the resulting microspheres were investigated.

Method of preparation for Floating Microsphere: Floating microsphere with a central hollow cavity was prepared by using Emulsion solvent diffusion–evaporation technique 15.  Accurately weighed quantities of drug, Eudragit S100 were dissolved in a mixture of ethanol and dichloromethane (1:1 solvent ratio). Above prepared solution was poured into 150 ml distilled water containing 0.75% w/v Polyvinyl alcohol (PVA) and maintained at a temperature of 30–40°C. The resultant emulsion was stirred with a propeller type agitator at 400 rpm for 1 hour to allow the volatile solvent to evaporate.

% Entrapment Efficiency: Microspheres (50 mg) were crushed by using mortar and pestle, and then the crushed powder was transferred into 100ml volumetric flask. Add some quantity of 0.1 N HCl to the volumetric flask and sonicate the resulting solution for 30 min. on ultrasonicator. Further make up volume with 0.1 N HCl. And make up the suitable dilutions of resulting solution so that to obtained the solution of desired drug concentration. The absorbance was measured spectrophotometrically at 210 nm for Nateglinide.

Theoretical drug content- is the theoretical amount of drug in microspheres

Preparation of Microspheres: Microspheres were prepared as per formulation Table 1. By emulsion solvent diffusion–evaporation technique by using organic solvents 19 such as dichloromethane and ethanol. Excellent buoyancy was shown by prepared microspheres because of their hollow nature, which can be retained for a longer period of time in the upper part of gastrointestinal tract (GIT) in order to increase gastric residence time of the drug. The emulsion of Nateglinide and Eudragit S100 in dichloromethane and ethanol was poured into aqueous poly-vinyl alcohol solution. The ethanol rapidly partitioned into external aqueous phase and the polymer precipitated around the dichloromethane droplets, subsequently the evaporation of the dichloromethane led to formation of hollow cavities in the microballoons.

Entrapment Efficiency: The drug entrapment efficiency of formulation F1 to F12 was shown in Table 2.

% Buoyancy test: Buoyancy of prepared microspheres were investigated by in-vitro buoyancy test, results of buoyancy test for all formulations (F1 to F12) are shown in Table 2.

In-vitro Drug Release: % Drug release for all formulations (F1 to F12) was determined as mentioned in Figures 1-3. Out of all the formulations the F1 to F4 (Eudragit S100) formulation was found to be best formulation, as it released Nateglinide in sustained manner. 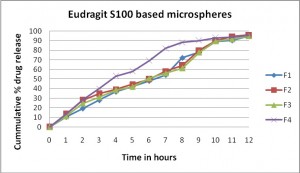 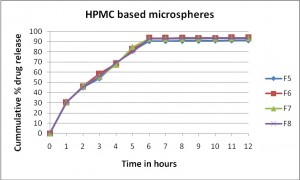 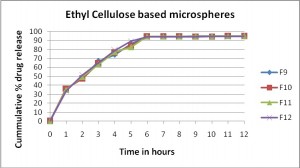 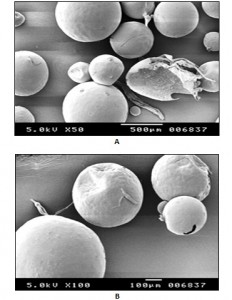 AFIGURE 4A AND 4B: SEM PHOTOGRAPHS OF OPTIMIZED FORMULATION 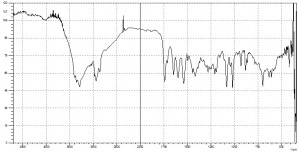 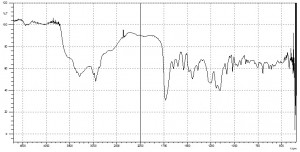 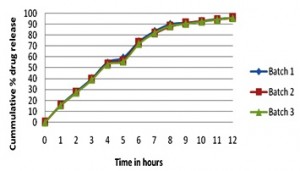 Stability of formulation is an important factor to determine the quality of the dosage forms. The stability of Nateglinide loaded microsphere (Table 5 & Table 6) were studied by performing both the accelerated testing and long term testing of optimized formulation.. The results showed no significant difference in physical properties (color, surface morphology and particle flow) and no marked change in floating ratio of test samples for microsphere. The drug loading was found in contrast with the Nateglinide loaded microsphere capsules before storage in stability chamber.

CONCLUSION: Floating microsphere of Nateglinide were prepared by novel o/w emulsion solvent diffusion technique, using various biodegradable polymers such as Eudragit S100, HPMC and Ethyl Cellulose in order retain drug in body for longer period of time to increased bioavailability. Eudragit S100 based Microspheres show there buoyancy for more than 16 hours, required for sustained therapeutic activity, in comparison to HPMC and Ethyl Cellulose based microsphere due to their more hollow structure and porous nature. F4 formulation showed good result among all other formulations. The property of polymer and its quantity in the formulation played crucial role on particle size of microspheres, their floating time and Release profile of drug molecule. From the present work it was concluded that nateglinide microspheres based on Eudragit S100 offer a most suitable floating dosage form to improve bioavailability of Nateglinide.