ABSTRACT: Incorporation of drugs into non-ionic surfactant vesicles (niosomes) during their manufacture affords a possible method of achieving controlled release. The aim of this study is to formulate niosomes as carriers for delivery of diclofenac sodium (DCS). Niosomes are prepared with a series of sorbitan monoesters (Span 20, 40, 60, and 80) and sorbitan tri-oleate (Span 85) and co-surfactants of polyoxyethelene fatty acid esters (Tween 20, 40, 60, and 80), with or without cholesterol and charged lipids like stearylamine or dicetylphosphate. The prepared niosomes were evaluated for the entrapment efficiency (EE %) and in-vitro release rate of DCS. Niosomes formed of Span 60 gave the highest EE %, followed by Span 40, 20, 80 and 85. It was also found that increasing the total lipid concentration resulted in an increase in the EE %. However, the amount of encapsulated DCS (mg) per mmole lipid decreased. Increasing the concentration of DCS was accompanied by a slight increase in the EE % and a great increase in the entrapment efficiency expressed as mg/mmole lipid. Niosomes prepared by ether-injection method and reverse-phase evaporation method resulted in a marked increase in the EE % compared to those prepared by hand-shaking method. It was demonstrated that the uses of co-surfactants like different types of Tween with Chol in a molar ratio of 25:25:50 caused an increase in the EE %. Niosomes prepared from Span 40 and 60 showed the slowest release rate than those prepared from Span 20, 80 and 85. However, the incorporation of co-surfactants into niosomes resulted in a greater decrease in the release rate of DCS from niosomal vesicles.

colloidal particulate carriers such as nanoparticles, liposomes, microemulsions and niosomes have distinct advantages over conventional dosage forms because the particles can act as drug containing reservoirs. Modification of the particle composition or surface can adjust the affinity for the target site and/or the drug release rate, and slowing drug release rate may reduce the toxicity of drug.

So, these carriers play an increasingly important role in drug delivery 1. Niosomes are non-ionic surfactant vesicles that can carry hydrophilic drugs by encapsulation or lipophilic drugs by partitioning of these drugs into hydrophobic domains 2. Niosomes are unilamellar or multilamellar spheroid structures composed of hydrated mixtures of cholesterol and non-ionic surfactants.

The bilayer membrane of niosomes mimics biological membranes giving them increased stability and residence time in circulation. From a technical point of view, niosomes are promising drug carriers as they possess greater stability and lack of many disadvantages associated with liposomes, such as chemical instability, high cost, variable purity of natural phospholipids and special requirements for handling and storage 3.

Another advantage is the simple method for the routine and large-scale production of niosomes without the use of unacceptable solvents. Niosomes have been extensively investigated for their application as controlled release drug delivery and drug targeting. Niosomes have attracted a great deal of attention in the delivery of dermal drugs because of many advantages, like they are biodegradable, biocompatible, non-toxic, non-immunogenic in nature and effective in the modulation of drug release properties 4. In recent years, niosomes received a great attention as potential drug delivery systems for different routes of administration, such as intravenous and intramuscular, subcutaneous,intraperitoneal 5 and transdermal 6.

The purpose of this work is to formulate niosomal preparations of diclofenac sodium (DCS) and to evaluate the in-vitro performance of the prepared niosomes.

Preparation of Non-ionic Surfactant Vesicles (NISVs): All DCS-entrapped niosomes were prepared from a mixture of non-ionic surfactants, with or without Chol and with or without charge inducing agents as SA or DCP in different molar ratios. The total lipid concentration was 300 µmole.

Sizing of the Vesicles: NISVs were mounted on a glass slide and examined under a phase contrast microscope with magnification of 400x using a stage micrometer to determine the size of the vesicles 11.

Determination of DCS entrapment efficiency in niosomes: The un-entrapped free DCS was exhaustively dialyzed using dialysis tubing for one hour each time against 100 ml of phosphate-buffered solution (pH 7.4). The dialysis of free DCS was completed after about six changes of buffer solution when no DCS was observed in the solution. The drug content was determined spectrophotometrically at 276 nm using PBS (pH 7.4) as a blank 6. The entrapment efficiency was defined as the percentage ratio of the entrapped drug concentration to the total drug concentration and calculated according to the following equation:

In-vitro drug release from Niosomes:   The in-vitro release of DCS from NISVs was determined by a simple dialysis method. One ml of the dialyzed vesicle dispersion or DCS solution was placed into a glass tube to which a cellophane membrane was attachedtoone side, the tube was suspended in 250 ml beaker containing 100 ml PBS (pH 7.4). The solution was maintained at 37οC ± 0.5οC and stirred at 100 rpm in a thermostatically controlled water bath shaker.

Four milliliters samples were withdrawn at specified time intervals and replaced with an equal volume of fresh buffer solution (pH 7.4) at the same temperature to keep the volume of the solution constant during the experiment. The samples were analysed spectrophotometrically at 276 nm against PBS (pH 7.4) as a blank 11. In-vitro release of plain drug solution of the same concentration as in niosomal dispersion was also studied.

Examination of niosomes by Transmission Electron Microscope: Niosomes were analyzed by negative stain electron microscopy using 2% ammonium molybdate solution 12, 13. 0.5ml niosomal suspension and 0.5ml negative stain were mixed, and one drop placed on a carbon-coated grid and allowed to dry. Grids were rinsed with water to remove excess stain, and examined with an electron microscope (100 CX, Jeol, Tokyo, Japan).

RESULTS AND DISCUSSION: The effect of variables on the entrapment efficiency and in-vitro release rate was investigated. The variables studied were: type of surfactant; lipid composition (cholesterol content and incorporation of charge inducing agents); total lipid concentration; drug concentration; method of preparation (HSM, EIM and REV) and incorporation of co-surfactants. The time of hydration, temperature of hydration and volume of aqueous phase were kept constant unless otherwise indicated.

Entrapment of DCS in niosomes:

For these non-ionic surfactants, only Span 80 has an unsaturated alkyl chain. The introduction of such double bond into the alkyl chain made the membrane more permeable 14. Span 40 and 60 are solid at room temperature and have the highest phase transition temperature (TC) 15, 16.

The observed relationship between the vesicular diameter of niosomes and sorbitan fatty acid ester hydrophobicity has been attributed to the decrease in surface free energy with increasing hydrophobicity, resulting in smaller vesicles 18. The niosomal vesicles size followed the trend Span 20 (HLB=8.6)>Span 40 (HLB=6.7)>Span 60 (HLB=4.7)>Span 80 (HLB=4.3)>Span 85(HLB=1.8) 19.

TABLE 1: EFFECT OF SURFACTANT STRUCTURE ON THE EE % OF DCS AND MEAN VESICLES SIZE OF NISVS PREPARED BY HSM

TABLE 2: EFFECT OF CHOLESTEROL CONCENTRATION ON THE EE % OF DCS IN SPAN 60 NIOSOMES PREPARED BY HSM 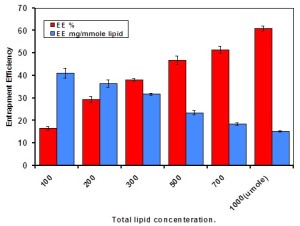 FIG. 1: EFFECT OF TOTAL LIPID CONCENTRATION ON THE EE OF DCS IN NIOSOMES PREPARED BY HSM, LIPID COMPOSITION = (SPAN 60: CHOL=1:1). 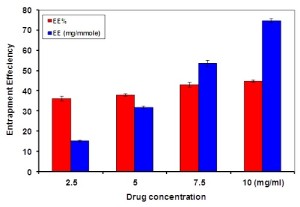 FIG. 2: EFFECT OF DRUG CONCENTRATION ON THE EE OF DCS IN NIOSOMES PREPARED BY HSM, LIPID COMPOSITION= (SPAN 60: CHOL=1:1).

TABLE 3: EFFECT OF CHARGED LIPID ON THE EE % OF DCS IN NIOSOMES PREPARED BY HSM

TABLE 4: EFFECT OF METHOD OF PREPARATION ON THE EE % OF DCS IN NIOSOMES PREPARED BY HSM

Release of DCS from niosomes:  From the data of in-vitro release of DCS figure 3, the rate of release of DCS through a dialysis membrane, for all the prepared formulations, was slower than that obtained from free DCS solution. Therefore, it was noticed that there is an efficiency of the niosomal preparations in slowing down the rate of release of the drug compared with the free drug solution, which released about 95% within 5 h. The release of DCS, from all DCS loaded vesicles, occurred in two distinct phases, an initial rapid phase, which stayed for about 6-8 h, followed by a slow phase but continued for at least 24 h. This biphasic release profile agreed with the release profile of tenoxicam from Span 60/cholesterol niosomes 28. 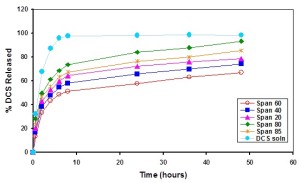 FIG. 3: EFFECT OF SURFACTANT STRUCTURE ON THE IN-VITRO RELEASE OF DCS FROM NISVS PREPARED BY HSM (SPAN: CHOL, 50:50). 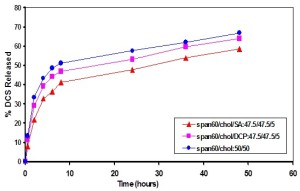 Fig. 4: Effect of cholesterol concentration on the in-vitro release of DCS from NISVs prepared by HSM.

The results are in accordance to those of 31 who reported that positively charged liposomes of acetazolamide showed the highest rate and extent of drug release. 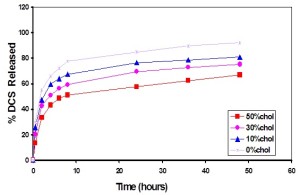 FIG. 5: EFFECT OF CHARGED LIPID ON THE IN-VITRO RELEASE OF DCS FROM NISVS PREPARED BY HSM 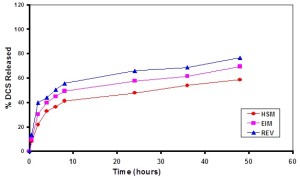 This effect may be attributed to the length and nature of the alkyl side chain of co-surfactant used. The longer alkyl chain, the slower release rate of DCS from niosomal vesicles 27. 15 reported similar results for a series of Span niosomes.Tween 60 and Tween 80 have the same head group but have different alkyl side chain. Tween 80 has an unsaturated alkyl chain; this double bond causes a greatest increase in the bilayer permeability and chain fluidity 14. 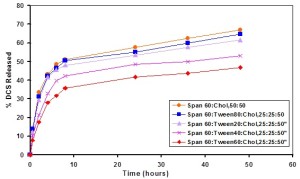 FIG. 7: EFFECT OF CO-SURFACTANTS ON THE IN-VITRO RELEASE OF DCS FROM NISVS PREPARED BY HSM

However, a high proportion of elongated vesicles observed with niosomes prepared from Span 60/Tween 60/Chol (25:25:50). The obtained results are in agreement with those of 27 who reported the formation of non-spherical vesicles for niosomes prepared from a mixture of a single or double alkyl chain non-ionic surfactant with Chol. 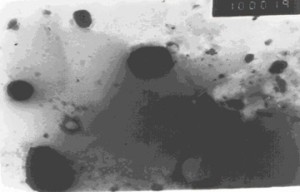 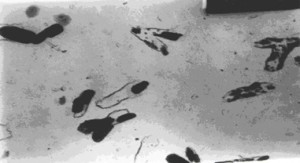 CONCLUSION: The encapsulation efficiency of niosomes towards DCS is a function of several variables such as the type of non-ionic surfactants, co-surfactants, the incorporated cholesterol, the introduction of charge inducing agents and the methods of preparation. The above mentioned variables also affect the drug release from the prepared niosomes. The optimum formulation which encapsulating a high percentage of DCS which could be released at a controllable rate over a prolonged period of time is (Tween 60/Span 60/Chol in a molar ratio of 25/25/50).