Valsartan is an orally administered ACE inhibitor for the treatment of hypertension and cardiac failure, but its solubility and oral bioavailability are poor. The objective of investigation is to formulate a   microemulsion drug delivery system of valsartan using minimum surfactant concentration that could improve its solubility and oral bioavailability. Valsartan microemulsion were prepared by Phase-titration method. The composition of optimized formulation consist of Capmul MCM(Oil), Tween 20 (Surfactant),PEG 400(Co-Surfactant) and it contains 40 mg of Valsartan.Pseudo-ternary phase diagrams were plotted to check for the micro-emulsification range.  Prepared microemulsion formulations were tested for micro emulsifying properties and the resultant microemulsion were evaluated for robustness to dilution, viscosity, drug content, thermodynamic stability studies and in-vitrodissolution. The optimized microemulsion formulation further evaluated for thermodynamic stability studies, particle size distribution, and zeta potential to confirm the stability of the formed Microemulsion. Resultant microemulsion optimized formulation (F2) shows drug release (99.71%), droplet size (36 nm), viscosity (0. 8872 cP), Zetapotenial (-38.8 mV) and inﬁnite dilution capability.  The formulation was found to show a significant improvement in terms of the drug release with complete release of drug within 80 minutes. Thus, micro emulsifying formulation of valsartan was successfully developed with sustained release.

INTRODUCTION: Microemulsions are four component mixtures composing of an oil phase, a water phase surfactant/s and a co-surfactant. The tendency towards formation of w/o or o/w microemulsion is dependent on the properties of the oil and the surfactant, the water-to-oil-ratio and the temperature.

When a mixture of surfactant and cosurfactant is added to a biphasic oil-water system, a thermodynamically stable, optically transparent or translucent, low viscosity and isotropic mixture spontaneously forms 1. The transparency of these systems arises from their small dropletsdiameter (10-200 nm).

Such small droplets produce only weak scattering of visible light when compared with that from the coarse droplets (0.5-100 µm) of traditional or standard macro-emulsions such as emollient liquids, cream, lotions, etc., structurally, micro-emulsions have normal micellar solutions, reverse micelles, cores or droplets of water or oil, and, for some systems, even bi-continuous structures could solubilizelarge amounts of both oil and water soluble drugs within micro-emulsions 2.

To triumph over these problems, various formulation strategies are exploited such as use of surfactants, lipids, permeation enhancers, micronisation, salt formation, cyclodextrins, nanoparticles and solid dispersions. Each and every method for bioavailability enhancement is having its own merits and demerits. In salt formation, the salts that are formed may convert back to their original acid or base forms and lead to aggregation in the gastro-intestinal-tract (GIT). Particle size reduction may not be desirable in situations where handling difficulties and poor wettability are experienced for very fine powders.

For compounds in which the primary limitation to absorption is poor aqueous solubility and slow dissolution rate, where intestinal permeability is not a limiting factor, (e.g., BCS Type II drugs) and for which conventional formulation approaches (e.g. salt or crystal form selection, particle size reduction, solid dispersions or the addition of surfactants) have failed, a lipid-based formulation should be considered 3.

Micro-emulsion drug delivery system are the isotropic mixtures of oil, surfactant, co surfactant and drug that form oil in water microemulsion when introduced into aqueous phase under gentle agitation. Micro-emulsions are among the methods used to improve the oral bioavailability of poorly soluble drugs by presenting and maintaining the drug in a dissolved state, in small droplets of oil, all over its transit through the GIT 4.

These formulations spread readily in the GIT, and the digestive motility of the stomach and the intestine provide the agitation necessary for micro-emulsion. In a good micro-emulsion system, small emulsion droplets containing dissolved drug are formed on contact with gastrointestinal fluid. The drug in the fine emulsion droplets is exposed to a large interfacial area thus allowing for greater diffusion through the membrane to take place 5.

Valsartan is ACE inhibitor used as an adjuvant in treatment of hypertension. However, the low aqueous solubility and poor dissolution of this molecule in gastric fluid affects its rate of absorption, resulting in a low and variable oral bioavailability. It is absolute bioavailability of 19-25%, when 40 mg of oral valsartan is compared with the same dose 40 mg pure valsartan drug.

The dose of valsartan varies between 40-320 mg and frequently prescribed dose is 80 mg for the adult. Therefore, for the present study, 40 mg dose was selected for the development of microemulsion formulation. Primary objective is to enhance the solubility, dissolution rate and avoid intra and inter subject variability of valsartan by micro-emulsion drug delivery system. The main objective of the study was to develop and evaluated an optimal Micro-emulsion formulation containing valsartan.

Materials for Component Selection: Valsartan base was a gift sample from Torrent pharmaceutical limited, Ahmadabad (Gujarat, India). Capmul-MCM was gift sample from ABITEC Corporation, Janesville, WI and Tween-20 and PEG-400 were gift samples from Merck Specialities PLT. , Worli-Mumbai, India. All other chemicals were of analytical grade.

After reaching equilibrium, each vial was centrifuged at 10000 rpm for 10 min and excess insoluble lovastatin was separated by filtration using Whatman filter. Both free drug as well as solubilized drug concentration was quantified by UV spectroscopy Spectrophotometer (Shimadzu 1700, Japan) at 251nm 6.

Different combination of oils and S/Co-S mix were made so those maximum ratios were covered for the study to delineate the boundaries of phase precisely formed in the phase diagrams. Pseudo-ternary phase diagram was developed using aqueous titration method. Slow titration with aqueous phase is done to each weight ratio of oil and S/Co-S mix and visual observation is carried out for transparent and easily flowable o/w micro-emulsion.

The physical state of the micro-emulsion was marked on a pseudo-three-component phase diagram with one axis representing water phase, the other representing oil and the third representing a mixture of surfactant and co-surfactant at fixed weight ratios (S/Co-Smix ratio) 8.

In order to estimate metastable systems, the optimized formulation was diluted with purified distilled water. Then formulation was centrifuged (Remi Laboratories, Mumbai, India) at 1000 rpm for 15 minute at 0°C and observed for any change in homogeneity of Microemulsion formulation (Ghosh et al, 2004) 10.

It shows the particle size distribution of Valsartan Micro-emulsion diluted with water. The formulations F1-F5 were subjected for particle size measurement. The optimal batch is F2 (Valsartan + Capmul-MCM + Tween 20 + PEG 400) with mean particle size 38 nm in water. The magnitude of the zeta potential gives an indication of the potential stability of the colloidal system. A dividing line between stable and unstable aqueous dispersions is generally taken at either +30 or - 30 mV.

Particles with zeta potentials more positive and negative +30 mV and -30 mV are normally considered stable. . The optimal batch is F1, F2 and F5 with -34.6, -38.8, -32.9 mV zeta potential respectively which are near to -30 mV which shows these are considerable as stable product. 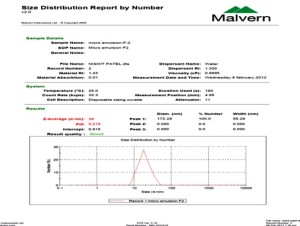 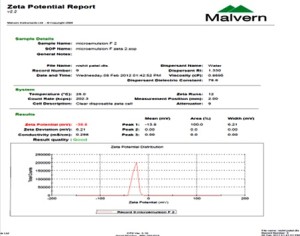 Thus, the selected formulations were subjected to different thermodynamic stability by using heating cooling cycle, centrifugation and freeze thaw cycle stress tests. On the basis of the mentioned three studies five formulations were selected and results were shown in Table 7.

On the basis of the thermodynamic stability studies it was found that F1, F2 and F5 formulations were passed and selected for further characterization. 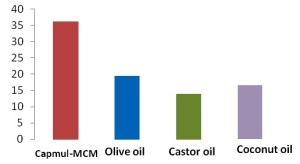 Where, √-Passed and ×-Failed

Where, √-Passed and ×-Failed

CONCLUSION: In the present investigation, three polymers namely Capmul MCM, Tween 20 and PEG 400 were evaluated as Oil, Surfactant and Co-surfactant in Microemulsion systems for enhancing the dissolution rate of poorly soluble drug Valsartan. Microemulsion systems of the selected drug in Capmul MCM, Tween 20 and PEG 400 were prepared by Phase titration method. A microemulsion system was prepared in each case at 2:1, 3:1 and 4:1 ratios of surfactant: co-surfactant by phase titration method. Viscosity of all the formulations is not less than 0.7012 cp which shows that all Micro-emulsion forms o/w microemulsion.

On the basis of Particle size, Viscosity, Robustness study and in-vitro drug release, it can be concluded that Microemulsion system is suitable for Oral administration.