ABSTRACT: The ultimate aim of this research work is to develop a cisplatin loaded chitosan nanoparticle system (CCNP) to facilitate the release of cisplatin in a more sustained manner to improve therapeutic efficacy via the reduction of its toxicity. As a step-in formulation studies the work has been limited to studying the various physical characters of CCNP using a zeta nanosizer. The chitosan polymer was selected in this study because of the high poly-cationic, biodegradable and biocompatible characters. The drug of choice is cisplatin, a well-known anticancer drug, used in the treatment of various cancer types. CCNP was prepared using the ionic gelation technique and characterized using the Malvern zetasizer nano zs instrument, UK to find out the polydispersity index (pdi), zeta potential and particle size determination. The ideal nanoparticles were exhibiting + 45.4 mV, 595.3 z.dnm and 0.6 pdi. The study concluded that CCNP can be formulated at an optimum concentration of 40 µg/ml of cisplatin entrapped in 2 mg/ml of aqueous solution of chitosan in the presence of formaldehyde (0.1% v/v) as cross linker and identification of physical characterization of nanoparticles was established as a preliminary step in formulation studies to target cancer cells.

INTRODUCTION: Cisplatin is a one of the most prescribed antitumor drug especially in ovarian, lung carcinoma, head and neck carcinomas, leukemia and testicular cancer 1 - 3. The pharmacological action of cisplatin is focusing to induce cytotoxic in tumor cells and causing cell death by interfering with the transcription mechanism of DNA, inducing apoptosis through the activation of signal transduction pathways such as the calcium channel, death receptor signaling and the activation of mitochondrial pathways 4.

Though cisplatin is a successful therapy in various types of cancer, it reported paroxysmal enhancement of toxicity and the production of intrinsic resistance 5 - 10. ATP Binding Cassette (ABC) transporters are very common and the largest membrane transporter proteins responsible for the import and/or export of various substrates. Multidrug resistance protein 1 (MDR1), functions as a pump to efflux a variety of drugs but not for cisplatin.

Multidrug resistant associated proteins (MRP) are responsible for the cisplatin efflux mechanism that leads to cisplatin resistance 11. Recently, many researchers have been exploring the efficacy of the biodegradable polymeric nanoparticle drug delivery system to overcome drug resistance in cancer 12.  The aim is that the nanoparticles on the nano scale can easily target the specific cells, therefore general toxicities can be avoided. In this regard, chitosan, a polycationic polysaccharide polymer, abundantly available from crustacean shells has been reported for delivering drugs and vaccines. In this study, we aimed to formulate CCNP to target cancer cells in a simple cationic and anionic adherent interaction that can bind easily on the membrane of cancer cells and minimizes the general toxicity of cisplatin.

Methods: CCNP was formulated according to protocol established by Sivakumar et al., 201413 using the ionic gelation technique. An extensive preformulation study was established by varying polymer and cross linker concentrations. In this study, 0.5% w/v of chitosan was used as a polymer matrix and 0.1% v/v of formaldehyde solution was used as cross linker at pH 5.5. The gel was homogenized at 4000 rpm. During the homogenization process 500 µl 1% v/v cisplatin was added at four different predetermined time intervals every 15 minutes. Ten minutes later 100 µl of 0.1% v/v of formaldehyde solution was added where the total gelation process was 90 minutes. Moreover, the gel was also exposed to sonication in a three-step process at predetermined time intervals every 30 minutes in order to get more free flowing particles. The physical characteristics zeta potential, size and pdi of particles were determined by zetasizer nano zs, Malvern Instruments, UK.

RESULTS AND DISCUSSION: Chitosan nanoparticle drug delivery systems will be more significant especially for cisplatin because of the high polycationic in nature of chitosan polymer which can easily be taken up by the cancer cells by means of fluid phase endocytosis or the interaction of electrical charge at surface level 14 - 16.  CCNP was formulated by using the ionic gelation technique by cross linking with formaldehyde and subjected only to zeta analytical techniques in order to ascertain the basic electro potential character at the surface level of the particle and size which are predominant factors for targeting cancer cells. Moreover, the study also focused on measuring the polydispersity index (pdi) to determine the particle distribution in a colloidal system.  Six different batches were screened by adjusting the drug: polymer ratio on a random basis. The drug: polymer ratio was kept at 1: 100 and 1: 50 by adjusting the cisplatin and chitosan strength in a predetermined approach. In addition, the zeta analysis was performed from the highest concentration to the lowest concentration in a prefixed manner. Table 1 explains the influence of drug and polymer concentration on the size, pdi and zeta potential. It is very obvious that the size, pdi and zeta potential were increased due to the increased concentration of the drug and polymer ratio. It is very important to note that the size and surface charge are important factors for targeting the cellular uptake of nanoparticles. Earlier reports 17, 18 also confirmed that the increased drug and polymer ratio lead to increased zeta potential and intensity.

TABLE 1: A SELF EXEMPLARY ON THE CHARACTERIZATION OF CCNP OF VARIOUS BATCHES

Particle size and pdi analysis: The particle size is one of the major factors that play a role in the internalization of cells. There are different methods of analyzing particle size by microscopic methods such as transmission electron microscopy (TEM) and scanning electron microscopy (SEM) which measures the actual dimensions of a single particle in diameter. However, it is very important to analyze the three-dimensional characteristics of the particles from multiple angles 19. Therefore, the zeta size analytical technique was chosen to determine the average diameter of particles in a colloidal system. The zeta size analyzer confirmed the size range of nanoparticles by Brownian motion in the dynamic light scattering (DLS) which is the most stable parameter producing the ‘harmonic intensity’ and expressed as z – average particle diameter. Fig. 1 illustrates the size distribution analysis of the ideal batch (Batch 5) and is able to observe the predominant main peak as well as additional peaks.

FIG. 1: ILLUSTRATION OF THE ZETA SIZE ANALYSIS OF BATCH 5 (IDEAL BATCH) OF CCNP

The main peak is about 91.8% in intensity with an average size of 360.4 zeta (d.nm). The Y - intercept value is an important tool to evaluate the signal: noise ratio for measured samples which can be used to judge the data quality. It is generally scaled such that an ideal signal will give a value of 1, and a value greater than 0.9 is considered as the best system whereas the value of a good system should be more than 0.6.  Batch 5 particles were showing a Y- intercept value of 0.920 which is considered as the best system. The polydispersity Index (pdi) was also measured to find the intensity of particles in a colloidal system to identify the monodisperse system. Generally, a pdi value of 0.08 to 0.7 is considered as a mono disperse system. In this study, all the batches were exhibiting mono disperse system without particle aggregation. Fig. 2 shows the phase distribution analysis of batch 5 (ideal batch) with a single phase indicating that nanoparticle dispersion is homogenous even though two very short peaks were obtained in the zeta size analysis. However, in the analysis the quality report showed good, met quality criteria and proved that the CCNP were successfully formulated. 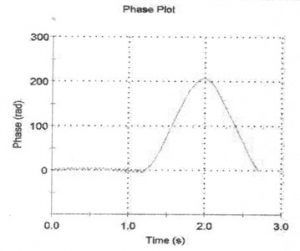 In this study, we observed a unique peak (Fig. 3) indicating that the zeta potential distribution is uniform which is more important for a successful targeting drug delivery system. On the other hand, the electrical charge of particles measured as zeta potential is the magnitude of the electrostatic between particles, and is one of the important parameters for justifying the stability and targeting at cellular level. Jeffrey and Anil, 201120 reported that nanoparticles with zeta potentials of greater than +30 mV are considered strongly cationic and less than −30 mV are considered strongly anionic. Based on that study we could observe the zeta potential of nanoparticles of all the batches that were subjected to analysis and showing above +30 mv. However, nanoparticles showing above +60mV considered as an excellent stable particle. In this study the nano particles of batch 1 to batch 4 exhibited a zeta potential of more than +60 mV, which obviously shows that increasing the concentration of the chitosan polymer lead to increased surface charges but their quality report did not meet the standard parameter. The particle size and surface charge of nanoparticles control the bio distribution and pharmacokinetic profile of the nanoparticles. Ratna Tantra et al., 2010 21 reported that the shift of zeta potential and pdi were highly influenced due to the effect of nanoparticle concentration. According to some studies, it is believed that nanoparticles with a high surface charge and / or large particle size are phagocytosed more efficiently by murine macrophage 22. 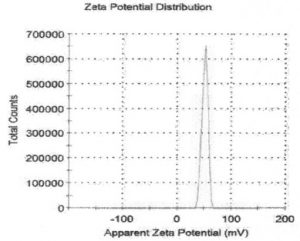 It is generally believed that highly positively charged nanoparticles can easily target the cellular membrane due to the anionic nature of cells. Therefore, chitosan became a classical polymer to target the cancer cells and to deliver the drug in a safer mode. However, excess positive charge can also cause non-specific binding and uptake by non - targeted cells. Thus, a moderately positive charged surface is preferable for cellular endocytosis. Moreover, the release of drugs from nanoparticles is greatly influenced by particle size and drug charges 23, 24. On the subject of these aspects the batch 5 particles in this study were exhibiting + 45.4 mV, proving that the particles have good stability, an ideal size and can easily be phagocytosed.

In sight on the preparation of CCNP, the present research demonstrates the influence of drug and polymer proportion to develop ideal nanoparticles. Accordingly, the results of batch 5 with batch 4 and batch 6 were compared to justify the development of ideal batch. Batch 5 vs batch 4 depicted that the concentration of cisplatin was 40 µg/ml in both batches but the concentration of polymers varied (Table 1). The batch 4 formula failed to develop good nanoparticles and their Y- intercept value was the lowest when compared to the rest even though the nanoparticles were exhibiting good zeta potential, size and pdi.  It is very significant to note that the drug: polymer ratio is the same in both batch 5 and 6 but batch 6 failed to pass the quality report of the instrument by expressing a lesser Y – intercept value. Therefore, it has been attributed that 40 µg/ml of cisplatin was successfully entrapped in 2 mg/ml of chitosan polymeric nanoparticles.  Furthermore, the shift of the zeta potential of other batches from batch 5 will explain the importance of the drug: polymer ratio to formulate good nanoparticles.

CONCLUSION: This preliminary study concluded that CCNP can be successfully formulated using the ionic gelation technique. The study focused only on zeta size, pdi and zeta potential analysis as the basic criteria for targeting cancer cell. In this study we observed that all six batches showed good results but only batch 5 was able to meet the required quality of the Malvern instrument. The study demonstrated the importance of the drug: polymer proportion to formulate ideal nanoparticles. This preliminary step is authenticating the particle characters to target cancer cells and opens up a new pathway in cancer targeting. Based on this study further work have been accomplished to develop a new formulation to target cancer cell for the betterment of human health care. Further studies are in process to establish a new formulation to develop CCNP. Thus, the physical characterization of particles by zeta nanosizer zs was laid down as a preliminary step and an important in formulation and development.

CONFLICT OF INTEREST: Authors declaring that there is no financial or non-financial conflict of interest.