Macrocyclic complexes of  MnII, CoII, NiII and CuII   using a macrocyclic ligand derived by the condensation of Trimethoprim and diethyl phthalate have been prepared and characterized by electronic, IR and NMR spectral studies as well as magnetic moment and conductivity. On the basis of spectral studies, an octahedral geometry has been proposed for all the complexes

INTRODUCTION:The chemistry of macrocyclic ligands has been known for several decades 1.Generally, macrocyclic polyamides are prepared by reaction of polyamine with either the diester salt of dicarboxylic acid or the dicarboxylicacid dichloride 2-4. Three novel complexes of Cu(II), Co(II) and Zn(II) using macrocyclic ligand derived by the condensation of diethyl phthalate and benzidine have been designed, synthesized and characterised 5. The Schiff base condensation of 2, 6 –diamino pyridine with 1, 3 diphenyl 1, 3 dipropanedione in the presence Ni(II), Co(II) and Cu(II)chloride in boiling methanol gives the complexes of the 16-membered macrocycle 6.

New family of 15-membered tetraamide macrocyclic complexes have been synthesized by template condensation reaction of o-aminobenzoicacid with aliphatic or aromatic diamines and diethyl malonate 7.Macrocyclic ligands are defined as cyclic molecules generally consisting of organic frames, either aliphatic or aromatic units into which the donor atoms are interspersed 8 the macrocyclic ligands have been synthesized by the condensation reaction of diethyl phthalate with o-phenylene diamine 9. The present work deals synthesis and physiochemical studies of a new series of macrocyclic complexes bearing tetra amide groups derived from trimethoprim with diethyl phthalate in the presence of transition metal ions as template.

MATERIALS AND METHODS: All the chemical reagents used in the preparation of macrocyclic Ligands and their metal complexes were of reagent grade (Merck). The solvents used for the synthesis of macrocyclic ligands and metal complexes were distilled before use. All other chemicals were of AR grade and used without further purification. Proton NMR spectra were recorded on a EM 300-30 MHz NMR spectrometer in DMSO. IR spectra of the samples were recorded on a shimadzce FTIR-8400s spectro-photometer in 4000-400 cm-1 range in a KBr pellet. The electronic spectra (ethanol) were recorded on the Lamda 35 spectrometer. The magnetic moments were measured out by using gouy balance. The conductivity was measured on a Toshniwals conductivity bridge using dip type platinised platinum electrode Purity of the compound checked by TLC.

Synthesis of Macrocyclic Ligand: Trimethoprim and Diethyl Phthalate were condensed to give macrocyclic ligand by the reported method 5, 9-10. 50 ml ethanolic solution of Trimethoprim (10mmol) was added to the 50 ml of ethanolic solution of Diethyl Phthalate (10mmol) and refluxed for three hours. Then, the solution was reduced to one third on a water bath. The resulting light brown colour crystals were washed with ethanol and ether then dried. The crude product were recrystalised from ethanol, the desired products was obtained. 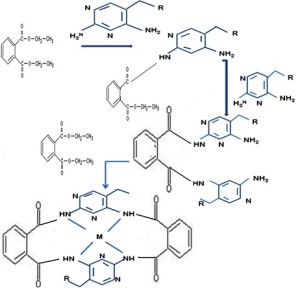 Synthesis of Macrocyclic complexes: A solution of macrocyclic ligand (5mmol) in ethanol (20ml) was added to a solution of metal chloride(5mmol) in ethanol (10ml) and the mixture was refluxed for three hour and It was then concentrated to half of the volume and set aside for two days. The microcrystalline compound which separated out was filtered washed with ethanol-ether mixture (1:1) and dried in vacuum over anhydrous calcium 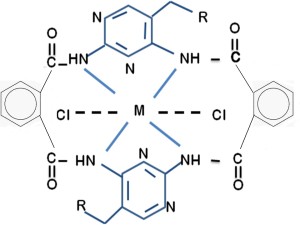 RESULTS AND DISCUSSION: All the complexes were found to be colour and soluble in water, acetonitrile, ethanol and DMSO. They were thermodynamically stable up to 350oC.

Molar conductivities: The molar conductances of these macrocyclic complexes in acetonitrile were measured and then calculated molar conductance value are reported in Table 1. The conductivities of the complexes were in the range of 10 – 50 Ohm-1 cm2 mol-1 11 which is characteristics of 1:0 electrolytes, suggest that all of them are non –electrolytes. The presence of chloride ions is evident only after decomposition of the complexes, probably due to their presence in the coordination sphere. Based on the conductance, metal chloride complexes are assigned the structure [M (ML) cl2]. ML-Macrocyclic ligand. M-Metal.

Electronic spectra: The electronic spectra of the MnII, CoII, NiII and CuII   complexes were recorded in ethanol solution and spectral data were presented in table. MnII complex exhibits two to three very weak bands at 18,515 cm-1, 20,405 Cm-1 and 26,954 cm-1 which are assigned to  6A1g → 4T1g(G) , 6A1g →  4T2g(G) and 6A1g → 4T2g(D) transition respectively. These observations reveal that the stereochemistry of this complex is consistent with the six coordinated octahedral geometry. The electronic spectral of CoII complexes show bands at 14705 cm-1 and 20833 cm-1.

IR Spectra: The Infra Red spectra gave some important information regarding to the skeleton of the complexes. the IR spectra of the macrocyclic ligands show characteristics bands for n(N-H) at 3454 cm-1, n(C=O) at 1658 cm-1 and n(C-N) at 1442 cm-1. In all the complexes, n(N-H) bands were shifted by 34-51 cm-1 to lower frequencies, due to coordination of the NH groups. The n(C-N) bands were also shifted by 10-65 cm-1 due to participation of the azomethine groups in coordination. On the other hand, the stretching vibrations of n(C=O) was not affected in all the complexes, which indicates that the carbonyl groups are not involved in coordination to the metal.

The coordination of nitrogen to the metal atom is supported by the appearance of a new band in the region 543-506 cm-1 assignable to n(M-N) vibration. 9.

Thus, the  1H NMR spectrum confirms the presence of Trimethoprim and Diethyl phthalate moieties in the macrocyclic product. All the above along with the absence of any band characteristics of NH2 OR OC2H5 protons, support the proposed macrocycle 7, 14.

CONCLUSION: Conductivity measurement indicates that the metal complexes are non-electrolytes in nature. The magnetic moments of all the complexes reveal that they are all of high spin type with paramagnetic nature. Electronic spectra data support that all the metal complexes have octahedral. The IR spectra data reveal that the macrocyclic ligand coordinated through four amino nitrogen of the macrocyclic ring and there is no indication of pyrimidine nitrogen in coordination.

Based on the various physiochemical studies such as conductivity, magnetic susceptibility, electronic and IR spectral studies octahedral geometry may be proposed for all the complexes

ACKNOWLEDGEMENT: I found great pleasure in expressing my deep sense of gratitude to Dr. M. Amaladasan, Associate Professor, Department of chemistry, St. Joseph’s College (Autonomous), Trichy-2 for having motivated and  supervised me into this work.  I extended my sincere thanks to the authorities of St. Joseph’s College (Autonomous), Trichy-2 for the facility and support .