INTRODUCTION: Nanoparticles used as drug delivery vehicles are generally < 100 nm in at least one dimension and consist of different biodegradable materials such as natural or synthetic polymer lipids or metals. Nanoparticles are taken up by cells more efficiently than larger micromolecules so can be used as effective transport and delivery systems 1, 2.

For therapeutic applications drugs can either be integrated in the matrix of the particle attached or to the particle surface. A dug targeting system should be able to control the fate of drug entering the biological environment. An effective approach for achieving efficient drug delivery would be to rationally develop nanosystems based on the understanding of their interactions with the biological environment, target cell population, target cell surface receptors, changes in cell receptors that occur with progression of disease, mechanism and site of drug action, drug retention, multiple drug administration, molecular mechanisms and pathobiology of disease under consideration. Reduced drug efficacy could be due to multiple drug targeting, chemical properties of delivering molecules, alterations in genetic makeup of cell surface receptors, over expression of efflux pumps, changes in the signalling pathways with the progression of disease or drug degradation. Most of the nanoparticles prepared from water insoluble polymers are involved heat, organic solvent or high shear force that can be harmful to the drug stability. In contrast water soluble polymers offer mild and simple preparation methods without use of organic solvent and high shear force 3, 4, 5.

Carbapol is a high molecular weight Poly(acrylicacid) copolymer ,loosely cross linked with allyl sucrose 6, 7, 8. This mucoadhesive polymer could interact with mucus glycoproteins by forming physical entanglements followed by hydrogen with sugar residues on oligosaccharide chains resulting in the formation of a strengthened mucus gel network, which allows the mucoadhesive system to remain adhesive for an extended period of times. It was also showed that coating nanoparticles with them improved their mucoadhesion 9, 10, 11.

Preparation of Carbapol coated nanoparticles: Carbapol coated nanoparticles were prepared by emulsion polymerization technique in a closed 100ml flask. Carbapol was dissolved in 100 ml water under magnetic stirring at 400-500 rpm. One percent (w/v) of the monomer methylmethacrylate was dissolved in the above mixture at 750c and APS solution was added. The reaction was completed after 24 hrs. Different batches were prepared according to the following reaction conditions. 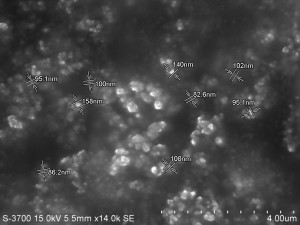 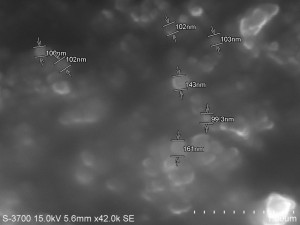 Physical status of carbapol nanoparticles: An X-ray diffractometer (Philips, Xpert-Pro, Netherlands) was used to determine the physical status of carbapol in the nanoparticles. The diffraction angle (2θ) was recorded from 3° to 80° with a scanning speed of 5°/minute. CuKa radiation was used as the X-ray source at 40 kV and 30 mA. Particle size of carbapol is also conformed by X-ray diffraction study. Particles are found be crystalline in nature. 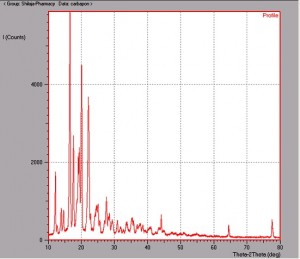 The mean size of the ordered domains is determined by the following formula;

K=0.9 (typical value) varies with the actual shape of the crystallite

Scherrer equation: It is not applicable to grains larger than about 0.1 µm.

Therefore bioavailability of the drug may be improved. Therefore they are promising for transmucosal drug delivery.