ABSTRACT: Diabetic foot ulcer (DFU) is one of the major problems encountered by nearly 15 % of diabetic patients. Combinations of different antibiotics are used to treat the infection which makes the microorganism multi drug resistant. Among various types of drug delivery system, transdermal drug delivery is preferred in treating DFU because it delivers the drug directly to the wound site, which increases the rate of healing. Terminalia chebula (King of medicine) is known to possess wound healing ability and high antimicrobial activity against almost all bacteria isolated from DFU. In this scenario, we have fabricated different combinations of drug loaded composite films of cellulose acetate and chitosan. The formulated films were characterized using UV-visible and FT-IR spectrophotometer. Physicochemical characterization of the films was done with respect to drug uniformity, moisture uptake, folding endurance, drug release and antimicrobial studies. The antimicrobial activity of the films was evaluated for E.coli and B.subtilis and observed a good control of the growth of microorganism. The results suggest that the cellulose based films are well suited for DFU.

INTRODUCTION: Diabetes mellitus is a group of metabolic disorder characterized by high blood glucose, as a result of insufficient insulin production, action of insulin or a combination effect of both 1. The prevalence of diabetes has increased tremendously worldwide, and nearly 365 million people were affected diabetes in 2013.

Every year the number seems to increasing drastically and expected to increase to 592 million by 2035 (http://www.idf.org/diabetesatlas). There are many complications like diabetic retinopathy, coronary artery disease, impaired wound healing associated with diabetes. Among them impaired wound healing of diabetic patients is the major complication 2, 3.

Nearly 15 % of all diabetics will develop a foot ulcer in their life time and the mortality rate associated with that ulcer is more than twice as deadly as breast cancer. In diabetic wounds, decreased levels of nitric oxide, growth factors and increased level of reactive oxygen species proliferates the wound. The other problems associated with diabetic wound healing are delayed collagen synthesis and accelerated degradation of newly synthesized collagen, impaired epithelialization and reduced angiogenesis 4. Various efforts are being carried out to find the effective drug release membrane for the treatment of DFU. The selection of polymer and drug are important to meet the required properties for this treatment. Various bio-polymers such as chitosan, gelatin, cellulose derivates and hyaluronic acid with drugs are employed for curing the DFU. Among these polymers, chitosan and cellulose have received great potential for drug delivery applications due their physico-chemical and biological characteristics.

Chitosan, a(1–4)-linked 2-amino-2-deoxy-D-glucopyranose, is derived from chitin, second most abundant natural polysaccharides and is the major component of the exoskeleton of crustaceans 5. Chitosan is hydrophilic, non-toxic, biocompatible and biodegradable polymer. It has a unique antimicrobial activity and inhibits the growth of wide variety of fungi, yeasts, and bacteria 6. The positively charged chitosan and the negatively charged cell membrane interact to disrupt the cell wall of the microorganism 7. Chitosan can be cross linked into matrix using chemical cross-linking agents such as glutaraldehyde and genipin, but they are highly toxic.

Cellulose is a naturally occurring polymer and widely used in the biopharmaceutical industry because of its abundant availability, biodegradability and compatibility with biological systems 8. It is mechanically stable, durable and well suited for transdermal drug delivery 9. The drug release rate is relatively constant in cellulose acetate films. It is not affected by concentration gradient but the thickness and permeability of polymeric membrane plays a vital role in transdermal drug delivery applications 10.

Terminalia chebula, (T.chebula) King of medicine, has high potent to cure various diseases like diabetes, indigestion etc 11. Diabetic wounds have low levels of free radical scavengers, i.e. both enzymatic and non-enzymatic antioxidants. The oxidative stress is responsible for induction of diabetic complications 12. Antioxidants accelerate wound healing and avoid the proliferation of the wound by reducing the reactive oxygen species. So, proper antioxidant activities are required for wound healing 13. Antioxidants enhance the biological actions of NO by stabilizing NO by protecting it against ROS and other radicals 14. The tannins are the active component of T.chebula; a potent antioxidant known to posses wound healing activity and was known to heal diabetic wounds on external application in diabetes induced rats 15. In this context, we aim to establish a new drug loaded cellulose/chitosan composite film to treat the DFU and the infections associated with it. The present work combines the advantages of the drugs and the biocompatibility and bio-processing nature of the polymers resulting in desired drug delivery characteristics.

The dried extract was grounded and weighed.

Weight of the drug powder = 5 g

Physical Appearance: All the films were visually inspected for color, clarity, flexibility and smoothness.

Thickness studies: The thickness of all the fabricated film was measured at five different points using digital micrometer (Mitutoyo Digimatic Micrometer, Coolant Proof Micrometer IP65). The average and standard deviation were calculated for each batch of the unloaded and drug-loaded films.

FT-IR Analysis: FT-IR spectra of the drug and the drug loaded cellulose/chitosan composite films were analyzed using IR Affinity (Shimadzu, Japan) spectrophotometer in the range of 4000 to 400 cm-1 to analyze the interaction between the drug and polymer matrix.

UV-vis studies was carried out to study the absorption peak of the obtained extract in water which is analyzed by using UV-visible spectrophotometer with aid of PG spectrophotometer, using a 1x1 cm quartz cuvette cell in the range of 200-800 nm.

Folding  endurance  is  to  find  the  flexibility,  which  is  needed  to handle  the    drug loaded cellulose based chitosan films conveniently and comfortably for the particular application. Folding endurance was determined by repeatedly folding the film at the same place till it broke. The number of times the film could be folded at the same place without breaking/cracking gives the value of folding endurance 17.

The fabricated films were marked, then weighed individually and kept in a vaccum desiccator (80 mmHg) at room temperature for 24 h. The films were weighed again until it showed a constant weight.

A weighed film kept in a desiccator at normal room temperature for 24 h was taken out and exposed to 84 wt % relative humidity (saturated solution of potassium chloride) in a desiccator until a constant weight for the film was obtained.

The fabricated films are cut into pieces (1x1 cm) and put in 100 mL dissolution medium (distilled water) used and placed in sonicator for 30 min then stirred continuously using a magnetic stirrer at room temperature for 3 h. The sample was withdrawn at the end of 3 h and the drug content is determined spectrophotometrically at 765 nm by Folin’s colorimetric method.

The patches were placed in phosphate buffer with pH 7.4. All dissolution studies were performed at 32 ºC, at 50 rpm, with each jar carrying 500 mL of PBS buffer. Samples were withdrawn at different time intervals 18.

Adjust the pH to 7.2 ± 0.2 and make up the solution to 1L.The total phenolic content in the sample was determined by using Folin-Ciocalteu colorimetric method based on oxidation-reduction reaction. In a test tube, 3 mL of the sample was added with 2 mL of Folin-Ciocalteu reagent (10 wt %) and 2 mL of 8 wt % Na2CO3 to get a total volume of 10 mL. The mixture was allowed to stand for 30 min at room temperature. The absorbance of the mixture was measured using UV-visible spectrometer at 765 nm 19.

100 mL of Luria agar was prepared by dissolving 1.3 g of Luria agar in 100 mL of distilled water. The Agar solution was poured in conical flask and plucked with non adsorbent cotton and sterilized at 120 ºC for 20 min. The sterilized media was poured into petridishes and allowed to get solidify. 1 mL of the culture of E.coli was added on the surface and distributed evenly using L rod. Small holes were made on the surface of solidified media using a puncher. The prepared films were cut into 1 cm x 1 cm and placed on the punched site. The plate was incubated for 24 h at 37 ºC. Same procedure was followed for B.subtilis. 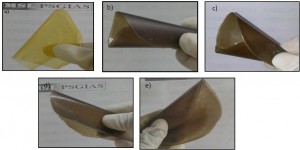 Fabrication of drug loaded cellulose/ chitosan composite films as follows. Cellulose acetate and chitosan was dissolved separately in the mixture of 30 % of acetic acid and 70 % of water. The prepared solutions were mixed well in the different ratios (1:1, 2:1 and 3:1) and allowed to stirrer vigorously at 80 °C until get the homogenous solution. Then 100 mg of drug was mixed into the all solutions separately and casted into film at room temperature. Among the ratios, 3:1 of cellulose /chitosan composite films were fixed as optimized condition for transdermal drug delivery applications.

The obtained extract of T.chebula was diluted with distilled water and analyzed using UV-visible spectrophotometer. The UV-visible spectra of T.chebula extract was shown in figure 2. It shows the absorption peaks at 215 nm and 270 nm which correspond to the presence of polyphenols, tannin and carbohydrates 20.

The peaks obtained at 1049.28 cm-1 indicates the presence of -CH alkane group. From FT-IR analysis, it was concluded that the drug was bonded physically to the polymer matrix. Hence, the drug release can be done efficiently by adjusting the ratio between cellulose acetate and chitosan. 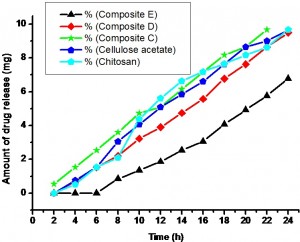 Antimicrobial activities are evaluated for T.chebula drug loaded cellulose, chitosan and composite of cellulose/chitosan films against E.coli and B. subtilis. Fig. 5 shows antimicrobial activity of drug loaded cellulose acetate, chitosan and composite of cellulose acetate/chitosan films and abbreviations are as follows; drug loaded cellulose acetate film named as ks-1, drug loaded chitosan film named as ks-2, 1:1 ratio of cellulose acetate/chitosan was named as ks-3. Similarly, 2:1, 3:1 are named as ks-4, ks-5 and pure chitosan film named as ks-6. From the Fig. 5, it was found that drug loaded cellulose acetate and their composites showed good antimicrobial activity against E.coli and B. subtilis. It can be concluded that the drug was efficient in inhibiting the growth of the microorganism and cellulose acetate plays no role in inhibition. There was a significant increase in MIC value of drug loaded chitosan in against the microorganism especially against gram negative bacteria, E.coli. Chitosan possess good antimicrobial activity and there are two suggested mechanism are: (1) The binding of cationic chitosan to sialic acid in phospholipids, and consequently restraining the movement of microbiological substances, and (2) penetration of oligomeric chitosan into the cells of microorganisms and prevention the growth of cells by preventing the transformation of DNA into RNA. When more amount of chitosan (positively charged) is adsorbed on the cell surfaces result in greater changes in the structure of the cell wall and in the permeability of the cell membrane. As a result, Gram-negative bacteria due to their more negatively charged cell surfaces are more susceptible to chitosan, and sensitivity of the Gram-positive bacteria was highly variable and the mode of action of chitosan is more complex than simple interaction of chitosan with cell membrane, and it involves a number of events, which may ultimately lead to a killing process 21. Chitosan with highest molecular weight ranging from 500-10,000 Da had the strongest bactericidal and fungicidal activities against most pathogens tested 22. 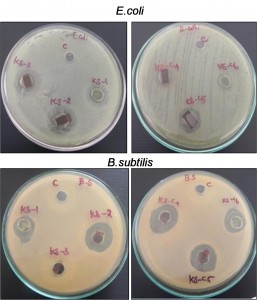 CONCLUSION: In this paper, we have developed T.chebula loaded cellulose/chitosan composite films. Various parameters with respect to film formation, drug loading, drug release and stability have been evaluated. It was observed that 95 wt % of drug was released within 24 h and the drug concentration was constantly increasing which is an important parameter for transdermal drug delivery. The film has a potential to increase the drug delivery rate if the pH reduces, so it can efficiently reduce the micro organism present on the skin.

The antimicrobial studies with E.coli and B. subtilis indicates that the composite film has good potential to inhibit the growth of micro organism. The in-vitro drug release studies suggests that cellulose blended composite films could be effectively used for diabetic wound healing applications. The in-vivo drug delivery studies will be carried out in the near future.

ACKNOWLEDGEMENTS: The authors would like to thank PSG Institute of Advanced Studies, Coimbatore for providing research facility and to Dr. Vaseekaran, Department of Animal Biotechnology, Alagappa University for antimicrobial studies.