ABSTRACT: Objective: Nanoliposomes of letrozole a drug used for breast cancer treatment were formulated. The present investigation was aimed to optimize the phospholipids concentration by formulating a series of nanoliposomes formulation and their characterization. Methods: Nanoliposomes were prepared using reverse-phase evaporation technique employing diverse ratios of soya lecithin and cholesterol concentration. The effect of various factors was studied on size, polydispersity index, loading capacity and entrapment efficiency of nanoliposomes. The prepared nanoliposomes were analyzed using DSC and ATR spectroscopy for drug-excipients compatibility. Results: The smallest particle size and polydispersity index (99.45, 0.262) highest entrapment (87.24 ± 0.59) and loading capacity (56.89 ± 0.39) was observed in batch NL8. The disappearance of drug peak in DSC indicates the dissolution of the drug in a polymer matrix. The ATR spectroscopy results show there was no interaction between components and drug is stable in the formulated nanoliposomes. Conclusion: It is concluded that the concentration of soya lecithin and cholesterol were critical parameters that affect the encapsulation of letrozole in the formulation and optimization of nanoliposomes.

INTRODUCTION: Breast cancer is one of the frequently diagnosed cancer and the leading causes of death in women worldwide 1-2. Breast cancer recurrence risk continues for an indefinite period after surgery, radiation and medical therapy 3. Based on the diverse expression of estrogen receptor-α (ER-α), progesterone receptor, claudin, cytokeratin, human epidermal growth factor receptor-2 (HER2), and other molecular markers, a number of subtypes of breast cancer have been identified, such as luminal A, luminal B, HER2, basal-like and claudin-low 4.

The growth of breast cancer depends directly on the action of estrogen; hence reductions in recurrence have been achieved by antagonizing the action of estrogen 5-7. One strategy is to antagonize estrogen receptor (ER), predominantly with tamoxifen (selective estrogen-receptor modulator), which has become the gold standard for the treatment of ER+ breast cancer patients over the past decades 8-10.

On the other hand, inhibition of estrogen production, which is also known as estrogen deprivation therapy, is emerging as another important treatment strategy for estrogen-dependent breast cancer 11-12. Before the advent of anti-human epidermal growth factor receptor 2 (HER2) therapies, the survival of metastatic HER2-positive breast cancer patients was quite poor 13. The advent of targeted therapies has led to impressive improvements in survival 14. Tamoxifen has been a standard first-line endocrine therapy for postmenopausal women with hormone-responsive advanced breast cancer, but more than half of patients fail to respond and time to progression is less than 12 months in responders. The third-generation aromatase inhibitors (anastrozole, letrozole) were developed to provide more effective therapeutic alternatives to tamoxifen 15. Aromatase inhibitors inhibit the aromatase enzyme which is an important enzyme in the conversion of androgens to estrogen and hence prevents estrogen synthesis 16. Contrary to tamoxifen, the aromatase inhibitors do not possess any partial estrogen-agonist activity 17 and are less susceptible to the emergence of resistance-associated with long-term estrogen deprivation 18.

Traditional anticancer chemotherapy is characterized by poor functional specificity for tumor cells. As a result, anticancer drugs generally have relatively low therapeutic effects as well as serious side effects, such as bone marrow suppression, gastric erosion, hair loss, renal toxicity and cardiomyopathy, etc. 19-20 Hence, one of the main goals of modern cancer chemotherapy is to develop a safe and effective drug carrier that could act preferentially at the selected targets while leaving normal tissues intact 21. Nanotechnology-based drug delivery systems are used to improve drug delivery for cancer treatment. Such a system possesses the potential to reduce side effects, minimize toxicity and improve anticancer efficacy 22.

Nanotechnology is the engineering and manufacturing of nano-sized molecules using atomic or molecular components, which can be expected to benefit all fields of medicine 23. It is considered to be an emerging technology that will have a significant impact on the advancement of tumor therapies 24. For example, liposomes are well described to decrease drug toxicity profiles by limiting normal tissue exposure to the drug, which remains encapsulated in the nanoliposomes and thereby confined to the blood circulation. Liposomes are created by self-assembly of lipids, which enclose an aqueous space. Liposome research into drug encapsulation and delivery have been carried out since the 1970s. Liposomes have been used for anticancer nanoparticles since the mid-1990s and liposome-derived technology is established as one of the cornerstones of nanotechnology in various fields, including medicine 25-26.

Liposomes possess unique properties which include: biocompatibility, biodegradability, self-assembly, low cytotoxicity, lack of immune system activation, ease of synthesis, scalability, and capability to incorporate both hydrophilic and hydrophobic drugs. Hence they are one of the most suitable carriers for drug delivery 28-31.

Currently, nanoliposomes are widely used to treat­ment modalities in cancer management. With this perspective, nanoliposomes of anti-cancer drug letrozole were prepared. The aim of the present study was to optimize the amount of soya lecithin, cholesterol and sonication time by preparing letrozole nanoliposomes formulations using reverse-phase evaporation technique. Further attempts were made to evaluate the influence of the amount soya lecithin, cholesterol and sonication time on the shape, size, zeta potential, entrapment efficiency, the loading capacity of nanoliposome and on drug release from prepared formulations.

MATERIALS AND METHODS: Letrozole was obtained ex-gratia from Adley Lab Limited, Panchkula (India). Cholesterol and Soya Lecithin were procured from HiMedia Laboratories Pvt., Limited, Mumbai (India). All other chemicals used including the solvents were of analytical grade.

Identification of Letrozole by DSC: DSC is the most frequently observed technique in order to observe the melting point and percentage purity of active ingredient and compatibility among the various ingredients of the formulation. DSC measurements were carried out on DSC Q10 V9.9, TA Instruments, Waters, USA. Samples were placed in sealed aluminum pans and heated from 50 ºC to 250 ºC at a rate of 10 ºC/min under nitrogen atmosphere (60 ml/min), with an empty pan as reference.

Identification of Letrozole by ATR Spectroscopy: ATR is a sampling technique used in conjunction with infrared spectroscopy which enables samples to be examined directly in the solid or liquid state without further preparation ATR spectrum was recorded on ATR Alpha, Bruker, Germany. First of all the sample holder was cleaned and then background measurements were done to nullify the effect of environmental purities in spectra. Then, the samples to be analyzed were placed on the sample holder and sample measurement was started. The spectrum was recorded over the range of 500-3500 cm-1.

Standard Stock Solution Preparation: The standard solution of letrozole was prepared by dissolving accurately weighed 10 mg drug in methanol and diluted with methanol up to 100 ml to get a final concentration of 100 µg/ml. Serial dilutions of stock solutions were made to produce a range of final concentrations of 0.5-8 µg/ml. The serial dilutions were scanned between 200-400 nm, they showed λmax at 240 nm.

Preparation of Nano-Liposomes: Nanoliposomes were prepared using reverse-phase evaporation techniques. Cholesterol and soya lecithin was mixed completely in diethyl ether and letrozole was dissolved in aqueous solution using methanol as a co-solvent. The mixing of the organic phase and aqueous phase was performed (in ratio of 3:1), and then ultrasonication was done on an ice bath for 5 min with 10s ON, 10s OFF intervals to form a homogenous water-in-oil emulsion with a probe sonicator. The resultant w/o emulsion was shifted into a round bottom flask and the non-aqueous solvent was evaporated under reduced pressure at 40 ºC to convert the emulsion into a gel, using a rotary evaporator. The resultant gel was broken into liposomes by further shaking. Then 10 ml phosphate buffer solution (0.10 M, pH 6.8) containing tween 80 was mixed with gentle vortexing at room temperature. Nanoliposomes were obtained by reducing the size of liposomes using ultrasonication with a probe sonicator in an ice bath with 10s ON, 10s OFF intervals for a total period of 10 min. Finally, the prepared nano-liposomes were stored at 4 ºC in a refrigerator. A total of 13 batches were prepared by varying sonication time, amount of cholesterol and phosphatidylcholine Table 1.

Particle Size and Polydispersity Index: The average particle size and polydispersity index were determined in quasielastic laser light scattering using Malvern Zetasizer® (Zeta Sizer, Nano ZS90, Malvern Instruments, UK). The analysis of the sample was performed in a hydro dispersing unit of the zeta sizer by placing a polystyrene cuvette in it.

Samples were sonicated just before analysis. 64 runs were carried out for the detection of particle size of a sample. Then the average diameter and polydispersity index of the sample was documented.

In-vitro Release Study: In-vitro drug release of letrozole was studied using the dialysis bag diffusion method using the dialysis membrane of desired specification average flat width-24.26 mm, average diameter – 14.3 mm, capacity – 1.61 ml/cm in 0.1 N hydrochloric acid. The prepared letrozole nanoliposomes (weight equivalent to 2.5 mg of drug) were transferred in a cellulose dialysis bag and sealed at both ends. This dialysis bag was immersed in the cylindrical vessel of USP dissolution apparatus II (Lab India DS 8000, Mumbai, India) containing 500 ml of dissolution medium maintained at a temperature of 37 ± 0.5 ºC. The rotating speed was set at 100 rpm. After certain time intervals in hours (0.5, 1, 2, 4, 6, 8, 12, 18, and 24) aliquots of 2 ml from the release media were taken out and replaced with an equal volume of fresh receptor medium. The samples were analyzed by the UV method. All the experiments were performed in triplicate and the average values were determined. 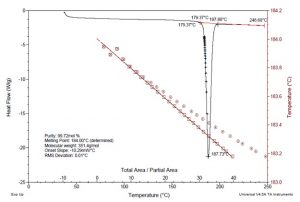 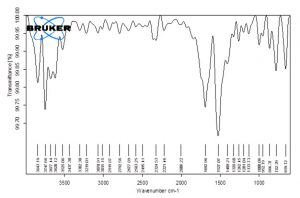 UV Method for Estimation of Letrozole: The dilutions of stock solution were prepared in the concentration range of 0.5-8 µg/ml. The λmax was found to be at 240 nm. The absorbance of serial dilutions was plotted against the concentrations to obtain the standard curve Fig. 3.

In-vitro Release Study: The rate of letrozole release from letrozole loaded nanoliposomes was estimated using the dialysis bag method at 0.1N HCl. Batch NL8 was selected as optimum on the basis of its high encapsulation and smallest particle size. The drug release of optimized batch NL8 was found to be 83.12 ± 1.08% at 24 h. The sustained release of nanoliposomes may prolong the time of drug absorption in the gastrointestinal tract, which might enhance the therapeutic activity of the drug and to reduce the side effects.

The release data was fitted to various mathematical models of zero order, first order, Higuchi model and Korsmeyer Peppas model. The linear regression i.e. squared correlation coefficient (R2) was determined for each mathematical model. Among all the models Higuchi model had shown the highest R2 value for in-vitro release data of NL8 batch is 0.9955 indicating that the release mechanism is predominantly diffusion. The slope n = 0.846 in the Korsmeyer Peppas model indicates it is non-fickian anomalous diffusion. The results of the model fitting are shown in Fig. 5.

Identification of Optimized Batch Nanoliposomes by DSC, ATR Spectroscopy: The disappearance of the endothermic peak of NL8 showed that the drug may have disappeared or dissolved in the polymer matrix during the formation of nanoliposomes. The DSC thermogram of letrozole, cholesterol, soya lecithin, physical mixture and optimized batch NL8 are shown as an overlay in Fig. 6. 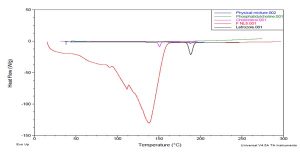 The ATR spectra for batch NL8 is recorded and compared with pure drug. There was no significant difference in the ATR spectra of letrozole and NL8 Fig. 7 and their comparison in Table 4. No significant shifting of functional peaks, no overlapping of characteristic peaks and also no appearance of new peaks were observed upon a comparison of the obtained spectrum with a reference spectrum. The results suggested drug stability during the entrapment process. There is no evidence of a chemical reaction between the drug and the polymer.

TABLE 4: COMPARISON OF THE PEAKS OF PURE DRUG AND BATCH NL8 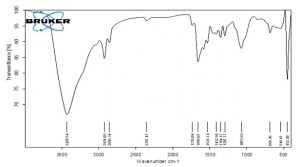 CONCLUSION: Nanoliposomes were found to be effective potential for cancer treatment by means of targeted delivery and controlled release. This reduces the side effects of anti-cancer drugs. NL8 batch is the final optimized batch with lowest particle size, highest entrapment and loading capacity. The highest R2 value in the Higuchi model predicts the release of drugs is by diffusion. The slope n= 0.846 in Korsemeyer Peppas model indicates it is non-fickian anomalous diffusion.