PREPARATION, OPTIMIZATION AND IN VITRO MICROBIOLOGICAL EFFICACY OF ANTIFUNGAL MICROEMULSION

PREPARATION, OPTIMIZATION AND IN VITRO MICROBIOLOGICAL EFFICACY OF ANTIFUNGAL MICROEMULSION

Recently much attention has been paid to the application of microemulsion as drug delivery system. Part of this interest appears as a consequence of their transparency, ease of preparation and long-term stability. These properties as well as their ability for incorporating drugs of different lipophilicity are some of the reasons why microemulsions have been thoroughly considered for pharmaceutical purpose. The aim of the present study is to improve the solubility of Terbinafine Hydrochloride, a slightly water-soluble antifungal drug by formulating a microemulsion made up of oil, surfactant and solubilizing agent/cosolvent. Tween 80, ajowan oil and peppermint oil were selected for preparing a microemulsion. Propylene glycol (PG) was used as a solubilizing agent. The effect of formulation variables on droplet size distribution was investigated. Droplet size was measured with Malvern Zetasizer instrument based on Photon Correlation Spectroscopy principle. The mean droplet diameter of microemulsions containing 1% w/w of terbinafine hydrochloride was below 100 nm and for the optimized formulation it was 8.1 nm. The optimized microemulsion was found to be stable and showed no physical changes when exposed to freeze-thaw cycles for 72 hours. Also it showed promising results in terms of achieving in vitro drug concentration above the MIC.

INTRODUCTION: Over the years, microemulsions have attracted more interest as potential drug delivery systems. Part of this interest appears as a consequence of their transparency, ease of preparation, and long-term stability. These properties as well as their ability for incorporating drugs of different lipophilicity are some of the reasons why microemulsion has been thoroughly considered for pharmaceutical purpose 1.

Microemulsions are optically transparent, low viscous and thermodynamically stable dispersions of oil and water stabilized by an interfacial film of a surfactant, usually in combination with a cosurfactant. In pharmaceutics, microemulsions are used as vehicles to deliver many kinds of drugs because of their thermodynamic stability, ease of preparation, and good appearance. In general, microemulsions can be separated into 3 types: water-in-oil (water/oil), bicontinuous, and oil-in-water (oil/water) 2, 3.

A microemulsion is a good candidate for oral delivery of poorly water-soluble drugs because of its ability to improve drug solubilization 4. Absorption rate of a drug increases as its thermodynamic activity in the vehicle increases.

The thermodynamic activity can be expressed approximately in terms of relative solubility (the ratio of the current concentration of the drug to the concentration in saturated vehicle).

Hence, absorption rate should be very high from supersaturated vehicles. However, because of the physical instability of supersaturated systems, there are no common dosage forms available. This problem might be overcome by application of systems that become supersaturated in situ. Such systems are represented by microemulsions 5.

Fungal infections are common in human beings, which are either topical or severe systemic infections. Invasive fungal infections are being identified with an ever-increasing frequency in premature infants, immuno-compromised hosts, and patients receiving immunosuppressive agents and those with acquired immuno- deficiency syndrome (AIDS). The prevention of fungal infections has been improved by the antifungal agent such as Terbinafine 6.

Terbinafine hydrochloride is a synthetic allylamine antifungal compound. It is currently employed as an agent against fungal infections of toes or fingernails caused by the fungus, Tinea unguium. It has shown activity in vitro against most strains of other microorganisms including Candida albicans. Terbinafine hydrochloride is a slightly water-soluble drug therefore its release rate is slow, resulting in drug concentrations in the body fluids which are well below the Minimum Inhibitory Concentrations.

In the present study, a microemulsion system composed of oil, surfactant and co solvent was designed and developed to enhance the availability and efficacy of antifungal drug Terbinafine HCl against Candida albicans.

Solubility study of Terbinafine Hydrochloride: Solubility study was performed in about forty different solvents for selection of excipients for micro emulsion formulation. One gram of excipient was taken and terbinafine hydrochloride was added with vortexing till saturation. The mixture was kept at ambient temperature for 48 hours and allowed to attain the equilibrium. A Solubility criterion chosen was visual examination for any undissolved particulate matter. The solubility of Terbinafine hydrochloride in different excipients is given in Table 1.

Preparation of Microemulsion: A total of 100 mg of terbinafine hydrochloride was mixed with 100 mg of propylene glycol (Cosolvent) and an oil-surfactant mixture consisting of different ratios of Tween 80 to either ajowan oil or peppermint oil.   Different compositions selected are shown in Table 2. Premicroemulsion concentrate containing terbinafine hydrochloride was added to double distilled water to make up the weight to 10g (1% w/w). The preparation was vortexed for 1-2 minutes to get a uniform product.

Drug Release Study: The release profile of Terbinafine hydrochloride from both microemulsion and gel formulation was generated from the percentage of Terbinafine hydrochloride released into the receptor chamber of modified Franz Diffusion Cell at each sampling point. A test formulation (either microemulsion or gel) at an equivalent amount of Terbinafine HCl (10 mg), was placed on a Durapore membrane (Millipore) in each donor chamber of Franz Diffusion Cell. Distilled water was used as a receptor medium for all tests. The temperature was maintained at 37±0.5 C throughout the experiment and receptor medium was stirred using magnetic stirrer. An aliquot of the sample (0.5 mL) was taken at predetermined time intervals and similar volume was replaced with fresh distilled water. The samples were analyzed spectrophotometrically. The release profiles of Terbinafine HCl from microemulsion and gel formulation were constructed by plotting the percentage of Terbinafine HCl released against time in minutes 8.

MIC Determination of Terbinafine Hydrochloride 9:  MIC was   determined by viable counting technique in which viable counts were performed at varying time intervals on the surviving number of a yeast population in contact with the solution of the drug.  The culture was standardized to 85% transmittance at 530 nm. Different concentrations of drug were prepared in Dimethyl sulfoxide (DMSO) from 100-400mg/ml. To each concentration (9.9 ml), 0.1 ml of culture was added. DMSO without drug was used as negative control. These dilutions were incubated at 30-35°C and 0.1 ml aliquots from each dilution were plated after 0, 2, 4 and 6 h respectively. Colony count was performed after 18-24 hours.

Determination of Microbiological Efficacy of formulations using Agar Well Method: The test organism was grown in nutrient broth for 18-24 h at 30-35°C. The concentration of cells was adjusted to 85% transmittance at 530 nm using sterilized broth as blank. This yields a cell suspension containing 1-5´106 organisms/ml which was confirmed by colony counting. One mL of the suspension was plated with 25 ml of melted and cooled nutrient agar medium. The plates were kept undisturbed for setting of agar.

For efficacy testing, 3-4 wells were dug on the solidified medium plates seeded with test organism using a sterile hole borer (7mm diameter). Weighed amount of each formulation equivalent to 2mg of the drug, including the marketed gel (Daktarin oral gel) were poured   into different   wells.  The    plates   were   then allowed to remain undisturbed for one hour to have even diffusion of drug into agar. The plates were   then incubated at 30-35°C without inversion for 18-24 h.  At the end of   incubation period, zones   of inhibition formed around the wells were measured with the help of a divider and scale and expressed in mm. 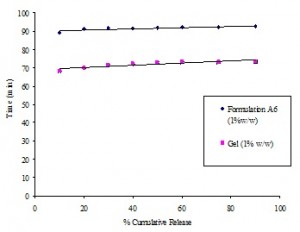 MIC Determination of the Drug: Different drug concentrations were made in DMSO varying from 100-400 mg/ml. This range was selected as reported in literature. Initially there were ~106 cfu/ml, these were reduced to negligible in 400 mg/ml concentration after 2 h of incubation only. In all the remaining concentrations, no colony was seen after 4 hours of incubation. So MIC of the drug was found to be < 100mg/ml as depicted in Table 5. Figure 3 gives the pictorial comparison between the optimum microemulsion formulation, marketed gel, plain gel and placebo gel. The measurements of zone of inhibition of different formulations are given in Table 6. 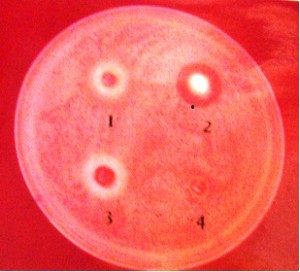 CONCLUSION: Microemulsion can be formulated to enhance the solubility of slightly soluble compounds and also, to increase the dissolution rate of the drug. Terbinafine hydrochloride as microemulsion showed better efficacy against Candida albicans as well. Microemulsion prepared using peppermint oil was the optimized formulation with droplet size less than 10 nm and good stability. It is concluded that new microemulsion formulation has shown promising results in terms of achieving in vitro drug concentration above the MIC. These results may be further evaluated under clinical applications in order to have a more effective dosage form for the treatment of oral Candidiasis.