INTRODUCTION:Most of the new chemical entities (NCE) under development these days are intended to be used as a solid dosage form that originate an effective and reproducible in vivo plasma concentration after oral administration 1-3. In fact, most NCEs are poorly water soluble drugs, not well-absorbed after oral administration 4-5, which can detract from the drug’s inherent efficacy 6-8.Consequently, if these drugs are not completely released in this gastrointestinal area, they will have a low bioavailability 9, 11.

Therefore, one of the major current challenges of the pharmaceutical industry is related to strategies that improve the water solubility of drugs 6, 12, 13. Drug release is a crucial and limiting step for oral drug bioavailability, particularly for drugs with low gastrointestinal solubility and high permeability. By improving the drug release profile of these drugs, it is possible to enhance their bioavailability and reduce side effects 9, 12, 14–16.

Numerous solid dispersion systems have been demonstrated in the pharmaceutical literature to improve the dissolution properties of poorly water-soluble drugs. Other methods, such as salt formation, complexation with cyclodextrins, solubilization of drugs in solvent(s), and particle size reduction have also been utilized to improve dissolution properties of poorly water-soluble drugs; however, there are substantial limitations with each of these techniques.

On the other hand, formulation of drugs as solid dispersions offers a variety of processing and excipients options that allow for flexibility when formulating oral delivery systems for poorly water soluble drugs. Much of the research that has been reported on solid dispersion technologies involves drugs that are poorly water-soluble and highly permeable to biological membranes as with these drugs dissolution is the rate limiting step to absorption.

The spray dry technique has been an important and widely applied technique in the pharmaceutical and biochemical fields 24, 25.

For fabricating micro-particulate systems, the spray dry can be applicable to both heat resistant and heat sensitive drugs both water soluble and water insoluble drugs. This technique is also applicable to both hydrophilic and hydrophobic polymers. It is a one stage continuous process, which produces dry powders, granules or agglomerates from drug-excipients solutions and/or suspensions. This technique can be adaptable in an industrial scale, which is superior to most of other fabrication procedures being only good for laboratory-scale operation.

Furthermore, the polymeric microsphere drug delivery systems produced by this technology have a potential to provide new types of administered routes, such as oral dosage forms, targeting systems to organs and tissues and long acting parenteral biodegradable systems. The objectives of the present study were therefore, to develop a solid dispersion of atorvastatin by spray drying, using Aerosil 200 as water-soluble solid carrier.  The spray dried powders were investigated and correlated to solid state characterization of the powders performed by Scanning Electron Microscope (SEM), Differential Scanning Calorimetry (DSC) and X-ray powder diffraction and in vitro dissolution study.

MATERIALS AND METHODS: Atorvastatin was a generous gift from Lupin Pharmaceutical Industries Ltd., (Mumbai, India). PVPK30, aerosol 200, were purchased by Research Fine Pvt. Ltd.(Mumbai, India). All other chemicals and solvents were of analyticalgrade.

Preparation of Solid Dispersions (SDs): Atorvastatin either alone or in combination with PVP (1:1.1:2 parts by weight) was dissolved in sufficient amount methanol, to clear solution proposed quantity of AEROSIL200 (Table I), was slowly added to obtain uniform suspension.

Evaluation of Solid dispersion: Powder is evaluated for the following parameters.

The stirring speed was 50rpm, and the temperature was maintained at 37oC±0.5oC. The samples were withdrawn at 15, 30 and 45 and up to 120 min, and replenished with fresh dissolution media. The samples were filtered and analyzed by spectrophotometer at 246nm.

Evaluation of solid dispersions of atorvastatin:

In this study, the results showed that the drug content of the solid dispersions of Atorvastatin prepared were up to 97.86 % and 72.40% for spray drying and solvent evaporation method respectively which containing the mainly PVPK-30, due their highly hydrophilic in nature and using porous adsorbent carrier (Aerosil 200).

Spray drying showed significant broadening of peaks in the region 1107 cm−1 while solvent evaporation shows at 1105 cm־1. It may attribute to intermolecular hydrogen bonding. This solid dispersion methods presented possibility of hydrogen bonding between atorvastatin and PVP due to PVP has two groups =N, =O that can potentially form hydrogen bond with drug. 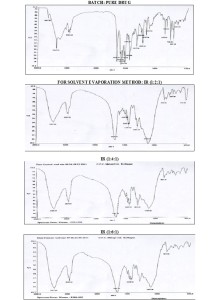 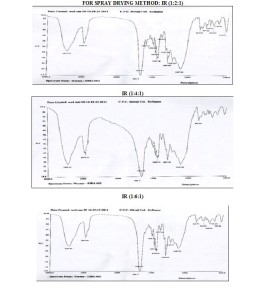 Reduction crystalline may be explained the higher drug release of PVP solid dispersion. Characteristic property of Aerosil is to form amorphous solid complexes which also influence on reduction of crystalline also in PVP carriers ratio absence of any diffraction peak corresponding to drug indicated that atorvastatin is in amorphous form. 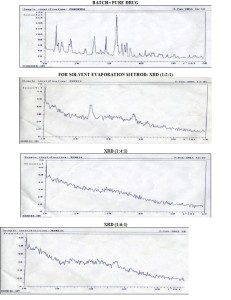 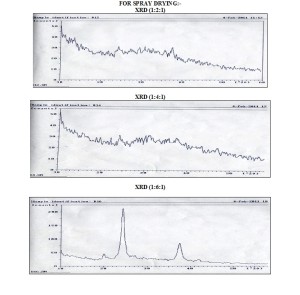 DSC Studies1, 4, 11, 14: Pure crystalline atoravastatin was characterized by single sharp peak melting endotherm at 173.7̊Cduring DSC. DSC scan a broad endoderm ranging from 80 to 120 ̊C was observed, because of the presence of residual moisture in PVP.In solvent evaporated as well as spray dried PVP due to loss of water from PVP and complete absence of drug peak at 173̊C.This complete absence atorvastatin peak indicate that atorvastatin present amophous inside the PVP matrix. 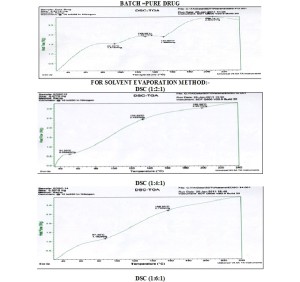 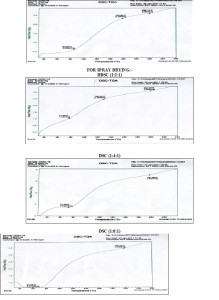 ACKNOWLEDGEMENTS: Authors are grateful thanks to Shivaji University, Kolhapur, for allowing the X-ray Diffraction and Differential Scanning Calorimetric studies.