Aims and Objectives: To study the prescribing patterns, approval status, adherence to NLEM and WHO-EML and cost of antimicrobials prescribed in surgical departments.

Methods: Data was collected from medical records of inpatients that underwent surgical procedures, from SSIMS&RC Teaching Hospital, Davanagere, Karnataka. The antimicrobials were classified based on WHO‐ATC classification and analyzed.

Conclusion: Among prescriptions analyzed, cefoperazone + sulbactam FDC was not approved by the regulatory bodies nor included in essential medicines list. Majority of antimicrobials were prescribed by brand name. Results indicate that there is a scope for improving prescription pattern which can be facilitated by tailoring the hospital antimicrobial usage guidelines and monitoring the same.

INTRODUCTION:Infections are a frequent cause of morbidity and mortality especially if improperly treated.

Irrational prescription includes polypharmacy, use of medically ineffective and inappropriate drugs unrelated to diagnosis, expensive drugs, use of branded drugs instead of generic drugs, and excessive use and misuse of antimicrobials 1-4.

Antimicrobials form the backbone of any prescription for treating infection. They are considered as the second most commonly prescribed drugs in the world, only next to the drugs indicated for cardiovascular diseases 5.

Their irrational use can result in increased incidence of adverse drug reactions, delay in relief, increased hospital days, increased morbidity and mortality, and financial loss and is one of the reasons for increasing resistance to antimicrobials 6, 7. The increase in the incidence of multi-drug resistant (MDR) pathogens has become a challenge to the physician or the surgeon in treating these infections 8. While selecting antimicrobials, one should consider severity of infection, route of drug administration, co-morbidities and spectrum of organisms to be covered. Hence, it is necessary to optimize antimicrobial selection; dosing, route, and duration of therapy to maximize clinical cure or prevention of infection while limiting the unintended consequences, such as the emergence of resistance, adverse drug events and cost 9.All these features justify rational use of antimicrobials as a major health need.

Drug utilization research (DUR) deals with the marketing, distribution, prescription, and use of drugs in a society, with special emphasis on the resulting medical, social and economic consequences 10. The scope of DUR is to evaluate the present state and future trends of drug usage, to estimate crudely disease prevalence, drug expenditures, appropriateness of prescriptions and adherence to evidence-based recommendations.11 World Health Organization (WHO) recommended core drug use indicators do not measure all important aspects of drug utilization instead, they provide a simple tool for quickly and reliably assessing a few critical aspects of pharmaceutical drug use in primary health care. As these are highly standardized, they do not need national adaptation and are recommended for inclusion in any drug use study using indicators 12.

Essential drugs are those that satisfy the health care needs of the majority of the population; they should therefore be available at all times, in adequate amounts and in the appropriate dosage forms 13. This concept was introduced to accelerate the positive impacts of drugs on health status, particularly for developing countries 13, 14, 15.

Despite there being stringent rules and regulations for approval of a drug before it reaches the market and the public, Indian markets are still flooded with unapproved products especially in the area of Fixed Dose Combinations (FDCs).

Drug prescription trend can be evaluated retrospectively by the analysis of clinical records of the region or hospital 7. Such types of drug utilization studies, which are one of the tools for evaluation of healthcare system, provide information regarding prevalence of irrational medication in a particular region 16.The knowledge about antimicrobial utilization patterns is necessary for a constructive approach to problems that arise from multiple antimicrobial usages. It is extremely important that institutions and hospitals should have an antimicrobial policy and ensure that the best choices are made by individual prescribers 17. Keeping the above things in mind, this study was taken up to evaluate the prescribing patterns of antimicrobials in surgical departments.

Study design, setting and study population: The present study was a retrospective cross‑sectional study carried out among inpatients admitted to surgical departments (Surgery, Orthopaedics, Obstetrics and gynaecology and others) in S. S. Institute of Medical Sciences And Research Centre, a 1000 bedded tertiary care hospital in Davanagere, Karnataka, between June 2013 to August 2013.

The case sheets, drug charts and laboratory investigations of patients who were admitted and received antimicrobial therapy were obtained from medical record section of the hospital and the information obtained was recorded in a self‑designed standardized pro forma and analysed. Medical records of those patients who were MLCs (Medico Legal Cases), DAMAs (Discharge against Medical Advice) were excluded from the study.

The prescription pattern was analysed by using the prescribing indicators as mentioned in the WHO core drug use indicators keeping antimicrobials in mind. Drugs were classified into different groups based on WHO-ATC (Anatomical Therapeutic Chemical) classification.The adherence of antimicrobial prescription was checked with the WHO Essential Medicines List (EML) and National List of Essential Medicines (NLEM). Approval status of the drugs was checked in the official website for Central Drugs Standard Control Organization (CDSCO), Directorate General of Health Services, Government of India and Drugs @ FDA (Food and Drug Administration): FDA Approved Drug Products.

Ethical considerations: The study complied with the WHO guidelines and was done after obtaining approval from Institutional Ethics Committee.

RESULTS: The study population of 154 patients included 94 males and 60 females with a mean age of 47.8 ± 22.04 years and 37 ± 11.25 years respectively. The demographic details are described in Table 1. A total of 464 antimicrobials were prescribed, the average number of antimicrobials per patient being 1.28 ± 1.79 during an average hospitalization period of10.56 ± 5.7 days. Antimicrobial prescription characteristics are given in Table 2.

Three fixed dose combinations (Cefoperazone + Sulbactam, Cefixime + Ornidazole and Ciprofloxacin + Tinidazole) which comprised 14 prescriptions were neither approved by DCGI or FDA nor were included in the NLEM or WHO EML. 340 (73.28%) were prescribed as parenteral formulations and 84 patients were switched from parenteral to oral preparation post surgically. All antimicrobials prescribed come under 8 categories according to the WHO ATC classification and their distribution is shown in Figure 1. 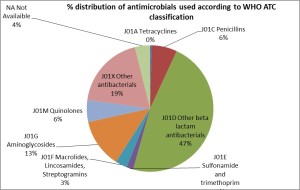 FIGURE 1: PERCENTAGE DISTRIBUTION OF ANTIMICROBIALS USED   ACCORDING TO WHO- ATC CLASSIFICATION 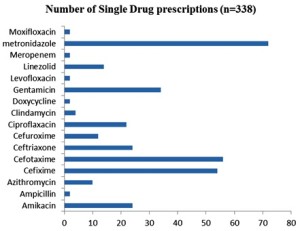 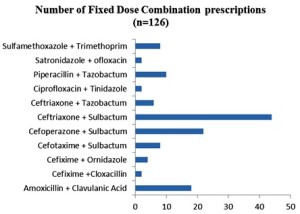 DISCUSSION: A prescription by a doctor may be taken as a reflection of physicians’ attitude to the disease and the role of drug in its treatment. It also provides an insight into the nature of health care delivery system 18. Antimicrobials are the mainstay of treatment for majority of the infections. There is an urgent need to promote rational antimicrobials use as resistance to the existing ones may pose a serious threat to the treatment of infections warranting discovery of newer ones. Early disease recognition and early start of corrective treatments for infections have proved to have significant outcomes in terms of treatment effectiveness 19. In the present study, antimicrobial usage patterns in surgical departments of a tertiary care hospital was studied.

Majority of cases in this study were between the age group of 21 and 60 years 116(75.33%). This is similar to a study by Ajay khade et al. where the productive age group is actively involved in socioeconomic activities, making them vulnerable to diseases, which may need surgical interventions and antibiotic treatment for infections.20 Majority of drugs were prescribed brand names [400(86.21%)] with only few [64(13.79%)] prescribed by their generic names/rINNs (Recommended International Nonproprietary Names). Owing to pressure from pharmaceutical companies and also to the drugs being marketed by their brand names, prescribers do not have much option in this opinion. Prescription of drugs by their generic names helps in the identification of the products, making it easier for the prescribers to choose between other alternatives competing in terms of quality, price or convenience 21, 22.

Use of two antimicrobials agents was most common [48(31.17%)] followed by three or more than three antimicrobial agents [36(23.38%)] each. Over prescription of antimicrobials coupled with inappropriate use is likely to be associated with risk of resistance, adverse drug reactions and increased cost of therapy 23.

Overall, beta lactam antimicrobials apart from penicillins (ATC class: J01D) were the most commonly prescribed antimicrobial agents both before and after surgical procedures. Most of the antimicrobials prescribed were approved by the drug regulatory bodies and were included in the NLEM and WHO-EML (~72%). The study used the WHO prescribing indicators to measure aspects of outpatient treatment. They are designed for use in health centers, dispensaries or hospital outpatient departments.

The prescribing indicators are less useful in specialty outpatient clinics in referral hospitals where the drug use pattern is more complex 25.

Limitations of the present study: The key limitation of the present study is sample size. As this is a pilot cross‑sectional analysis of 154 patients, the results may be biased. The sample size was small because only records of patients admitted to surgical departments between June and August 2013 were taken for analysis. Larger sample size with a longer duration of study period might be more conclusive. Periodic surveys involving larger number of subjects are needed for proper designing of antimicrobial policies and a stringent system for their implementation. Indirect costs related to antimicrobials were not analysed. Assessment of indications, culture sensitivity and adverse drug reaction profiles of antimicrobials prescribed were not done.

CONCLUSION: Of the 464 prescriptions analyzed from surgical in‑patient departments, majority were approved drugs with the exception of cefoperazone + sulbactum combination. The adherence to essential list whether WHO or NLEM was found to be only around 72%. Single drug parenteral formulations were most commonly prescribed. Beta lactam antimicrobials excluding penicillins(ATC class: J01D) were the most common antimicrobials prescribed in the present study. Frequent prescription auditing followed by drug utilization studies must be emphasized in order to tailor the hospital antimicrobial usage guidelines and thereby promote rational antimicrobial drug usage.

Conflict of interest: None

ACKNOWLEDGEMENTS: I am thankful to Dr. P. Nagaraj (Principal) and Dr. Kalappanavar (Medical Director) SSIMS & RC, for kindly granting the permission to access medical records for the study.