ABSTRACT: Excessive antimicrobial use leads to adverse drug effects, thus increased healthcare costs and promoting the emergence of antimicrobial resistance worldwide. The aim of the study was to evaluate the prescription pattern of antibiotics in pediatric outpatients at private hospitals in Rajshahi city of Bangladesh. WHO / INRUD prescribing indicators were used for the analysis of prescription pattern. A total of 329 pediatric prescriptions were analyzed of which 54% male and 46% female. Most of the patients (48%) belongs to the age group of 1 year - 6 years. Body weight was not mentioned in 17% of prescr-iptions, diagnosis was confirmed only in 11% patients and also 11% of children did not take or completed immunization. Among the children born 83% were of caesarian and 17% of normal delivery. The results also indicated that 964 drugs were used by the patients with an average 2.93 per prescription. However, none of the drugs was prescribed in generic name. Interestingly, only 37.24% drugs were prescribed from the national essential drug list. Children were mainly suffering from fever and common cold 50% and pneumonia 12%. In this study, the percentage of prescriptions with antibiotics were 83% of which major classes were cephalosporin 45.27%, β-lactam antibiotics 22.97%, macrolides 18.92% and quinolones 9.46%. Analgesics 16%, vitamins 8%, drugs for acid related disorders 2% and mineral supplements 2% were also prescribed. Cost of antibiotic per prescription was 299.38 taka. This study revealed that the prescription pattern was irrational resulting from an indiscriminate use of antimicrobials irrespective to the age of patients.

According to central intelligence agency, population less than 14 years of age constitute 28% of the total population in Bangladesh 4. However, the pediatrics is mostly suffering from numerous acute and chronic diseases. Premature neonates have poorly developed organ functions and are at highest risk of eliciting unexpected toxicity or poor clinical response results from the uses of suboptimal dosage regimens of drug 5.

Antibiotics are unnecessarily prescribed for viral infections such as common cold 6. It is estimated that 20 - 50% of all antibiotic use is inappropriate resulting in an increased side effects, higher costs and emergence of antimicrobial resistance 7.

Rational antibiotic prescription is very important to avoid multiple drug resistance, treatment failure, non-compliance and increased cost of treatment 8. Rational use of drug can be ensured by proper diagnosis, effective and safe treatment, selection of appropriate drug, dosage, duration,  writing a legible prescription, giving patient adequate information and follow up to evaluate treatment outcome 1. Evaluation of prescribing pattern will also help in minimizing adverse drug reactions as children are more susceptible to drug actions and in providing cost effective medical care 9. Therefore, the main objective of this study was to evaluate the prescribing patterns of antibiotics in pediatric outpatients in private hospitals of Bangladesh.

Study Design: A prospective and observational study was conducted in private hospitals of Rajshahi city, Bangladesh where a number of child specialists practices in private chamber. The data were collected over a period of three months from August to October, 2016.

Study Population and Data Collection: This survey was carried out among pediatric outpatients with a self developed standard questionnaire. A total of 329 patients prescriptions with age of 0 to 12 years were selected for the analysis of prescription pattern. Six students of the Department of Pharmacy of Varendra University were assigned for conducting the survey.

Data were collected by directly interviewing the guardian of the patient to determine the drug use pattern and the level of use of the national standard treatment guidelines (STG) at the facilities. The relevant information were recorded from the patient’s prescription collected by photocopy or by mobile camera. Patients who were unconscious / mentally retard, who were suffering from psychiatric diseases and who were admitted into hospitals were excluded from the study.

Few questionnaires were excluded during the data analysis because of inadequate information.

Ethical Approval: The study was conducted following the general principles (section 12) of world medical association (WMA) declaration of Helsinki. The research was also logistically supported by the Department of Pharmacy, Varendra University. The human subjects involved in this study did not use any hazardous agents and samples were not collected from them, and thus, it didn’t require any written approval from institutional ethics committee rather verbal consents were taken.

Statistical Analysis: Patient’s characteristics and data were analyzed using Microsoft Excel software 2010. Results were expressed in percentages (%). The prescribed drugs were classified according to WHO - anatomical therapeutic chemical classification (ATC) system 10. The number of prescription drugs was also calculated from the essential drug list (EDL) 2016 of Bangladesh 11. The prescription pattern was analyzed using general drug use indicators developed by WHO in collaboration with international network for rational use of drug (INRUD).

The following WHO / INRUD prescribing indicators were used in this study and were calculated using standard methods 12.

3. Percentage of patient encounters with an antibiotic prescribed. Optimal level: ≤ 30%.

4. Percentage of patient encounters with an injection prescribed. Optimal level: ≤ 10%.

5. Percentage of drugs prescribed from the national EDL or the facility’s formulary. Optimal level: 100%.

Besides these, age and sex distribution, the body weight and diagnosis status of patient, most commonly prescribed drugs other than antibiotics and cost of drugs per prescription were also taken into consideration.

It was found that body weight of the patients were not mentioned in 55 (16.72%) prescriptions and diagnosis was confirmed only in 36 (10.94%) prescriptions. None of the drugs were prescribed by generic name rather proprietary (brand) name were used. According to the guardian information 48% of children have completed immunization, 41% child parents continuing the process and however 11% did not take or completed immunization. Interestingly, 83% pediatric patients were born after casarian and 17% of which by normal delivery. 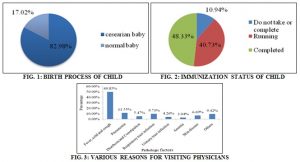 This study also indicated that the percentage of patient encounters with an injection was 9.12%. Only 359 (37.24%) drugs were prescribed from the essential drug list and the average cost of antibiotics per prescription was 299.38 taka.

TABLE 4: ASSESSMENT OF WHO PRESCRIBING INDICATORS 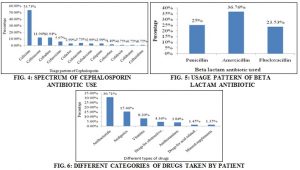 WHO highly recommends prescribing medications by generic name as a safety precaution for patients because it identifies the drug clearly, enables better information exchange and allows better communi-cation between health care providers 15. Our study revealed that none of the drugs was prescribed by generic name and the prescriber were not aware of the importance of generic name. In India the doctors prescribed generics 4.24% 16 in private practices whereas in government 67% 16. In other developing countries the rate of generic prescribing was above 59% 17, 18.

The majority of the patients suffering from fever, cold, cough and pneumonia were 49.85% and 11.55% respectively. 24 % of the patients with fever and common cold were under 6 years of age. Respiratory tract infection 32 (9.73%) and urinary tract infection 14 (4.26%), were also the reason for hospitalization of children. These results were in agreement with the previous studies where acute respiratory infection such as pneumonia, pharyin-gitis and fever were important reason for hospitalization and prescription of antibiotics 19, 20, 21, 22. Our results were in accordance with Tiwari et al., who showed that 80% 23 patients suffering from respiratory tract infection within this age group.

The percentage of encounters with an antibiotic was 272 (82.67%) which was very much higher than the optimal value ≤ 30% proposed and also than that of reported in India 43.19% 27 and Saudia Arabia 32.2% 28. The irrational use of antibiotics calls for more efforts and effective interventions to promote rational antibiotic use particularly in pediatric population. It is important to continuous monitoring of drug use in pediatrics as part of evaluation of risk/benefit of therapeutics in children 29. Results of our study indicated that only 36 (10%) of patients had diagnosis report. A brief diagnosis is also helpful to ensure that the drugs prescribed are appropriate for the patient’s condition 30 and thus if requires pharmacist can correct medication in consultation with the physicians to ensure better outcome.

Injections were prescribed in 9.12% of prescriptions which was within the proposed acceptable limit (≤ 10%). The cost of injections is always higher than that of oral therapy and increases the risk of blood borne diseases such as hepatitis and HIV/AIDS. The percentage of drugs prescribed from the national EDL of Bangladesh was only 359 (37.24%). It was lower than the study conducted by Mahalli et al., 99.2% 28. It is expected that 100% of drugs will be from the EDL or facility formulary.

The study was limited in that it was not designed to reveal the reasons leading to irrational prescribing of drugs. The sample size was small and seasonal variation in illness was not taken into consideration as because they might have affected disease patterns and antibiotic use. Future studies are required to investigate these factors. The study had a number of strength also. Use of WHO/INRUD core drug prescribing indicators added strength to the study. It was the first study conducted on pediatric patients in northern region of Bangladesh. So, it will be beneficial to measure the degree of rational or irrational drug use by the health care services.

CONCLUSION: The study measured the prescri-ption pattern of pediatric patients at Rajshahi city of Bangladesh using the WHO/INRUD core drug prescribing indicators. The results showed that the average number of drugs prescribed per encounter and the percentage of encounters with injection were within the optimal value.

However, the percentage of encounters with antibiotics was very much higher and the percentage of drugs prescribed from the EDL was very much less than the optimal. On the other hand, there is no trend to prescribe drug by generic name and maximum percentage of children were caesarian. We recommend that physicians need continuous education about rational prescribing of antibiotics and motivation to prescribe drugs by generic name. Clear and comprehensive rules should be formulated and implemented by the government to ensure rational prescribing.

ACKNOWLEDGEMENT: The authors are grateful to the Department of Pharmacy of Varendra University and also to the hospital authority for supporting us to conduct this survey based health research.