Background: Leprosy is one of the infectious diseases of public health importance; it is the leading cause of permanent physical disability as aresult of nerve damage. Individuals with leprosy have emotional stress and anxiety, which may lead to both psychological and psychiatric co-morbidity.

Method: Institution based cross-sectional study was conducted from April 2011-June 2011. Alternate patients from the daily register of outpatients were interviewed for symptoms of mental distress using the Self Reporting Questionnaire (SRQ-20). This questionnaire was administered by two trained nurses. Data was analyzed using SPSS version 15. Odds ratio were calculated to see the association of dependent variable with each independent variable. P-value <0.05 were considered as statistically significant.

Conclusion: This piece of study identifies non-specific mental distress. More over the study indicates a need for integration ofpsychosocial care into current medical treatment. Based on this, future work should be directed at further characterizing the nature and severity of mental disorder in leprosy patients.

INTRODUCTION: Leprosy is one of the infectious diseases of public health importance; it is the leading cause of permanent physical disability as a result of nerve damage 1. Prevalence of disability secondary to leprosy is decreasing in the World with MDT treatment. But in poor countries like Ethiopia about 5000new leprosy patients are reported each year for the past 5 consecutive year’s.

With more than 14% disability rate, meaning greater than 700 Ethiopians are being disabled by Leprosy every year 2.The fear of leprosy leads to the stigma and discrimination and is due to lack of understanding and knowledge about leprosy which increases misconceptions about the disease’s transmission and treatment.

The fact that most of those with untreated leprosy end up with severe deformities and disfigurements has contributed to the stigma 3.Some studies have concluded that stigma affects many aspects of the lives of people affected by leprosy including “mobility, interpersonal relationships, marriage, employment, leisure activities, and attendance at social and religious activities” 4. A stigmatizing disease like leprosy severely affects aspects of life such as social status, employment opportunities or jobs, marriage and family life 5.

Individuals with leprosy have emotional stress and anxiety, which may lead to both psychological and psychiatric morbidity 6, 7.They become isolated and lack motivation to continue treatment (if already started). There is a risk that the disease will progress with resultant disability and complications. Individuals may have decreased status in the community because of their conditions 5.In the case of leprosy they may become destitute and resort to begging as the only way of survival 3, 8.

The social participation of persons affected by leprosy is much more distressing to them than their individual effects. It impairs their quality of life in various ways 9, 10.

Persons with stigmatizing conditions experience problems in their marriages or difficulties in getting married and in their employment or getting employed.

As many as 450 million people suffer from mental disorder worldwide. More than 150 million persons suffer from depression at any point in time. Nearly 1 million commit suicide every year 14.

Over 13 million people are in need of support/consultation for their mental health problems according to recent survey conducted in Ethiopia and the estimated prevalence of common mental disorders is 12-17% 13. Mental illness was not recognized as public health problem both in developed and developing countries until the recent period of time 15.

Rural community based studies in Ethiopia reported the prevalence of mental distress to be 17 % 18, 19.

The objective of this study was to assess the prevalence of mental distress and associated factors among leprosy patients in ALERT hospital outpatient clinic, Addis Ababa 2011.

MATERIALS AND METHODS: Institution based cross-sectional study was conducted from April-may 2011. The study was conducted at ALERT, leprosy specialized hospital. It is the largest referral centre for people with leprosy in Ethiopia, as well as being an international training centre. It has different outpatient and inpatient services.

The outpatient clinics are divided into leprosy follow-up clinics, general medical clinics for people with leprosy. ALERT specialized leprosy hospital Situated, southwest of Addis Ababa on the way to Jimma.

This study used single population proportion formula and assumed 95% confidence and a precision of 5 % between the sample and the parameter was taken. To compensate for some non- response the study added 15%, thus a total of patients are required for the study.

The final sample size was 269. Systematic random sampling was employed to select selection from the leprosy outpatient clinic registration book.

Mental distresswas assessed through an instrument called SRQ-20. Cut off point of 11 out of 20 items was used based on previous Ethiopian studies.

Participants who scored ≥11out of 20 items of SRQ-20 was considered as mentally distressed. The questionnaire contained socio-demographic variables and Self Response Questionnaire (SRQ_20) and general health information. The self reporting questionnaire (SRQ) was originally developed by World Health Organization (WHO).

Pre-test was done in 5 % (13) leprosy patients to assume the consistency of responses of participants. After analyzing the pre-test result necessary modifications was made accordingly before it was used in the actual survey. Two days training was given to the data collectors and supervisor before the pre-test. The supervisor and investigators were closely following the day to day data collection process and ensure completeness and consistency of the collected questionnaire daily.

The collected data was coded, cleaned and entered to SPSS version 15 for data analysis. Univariate analysis was done on socio-demographic characteristics to see the frequency of each variables and the prevalence of mental distress in leprosy patients. Bivariate analysis variables was done to test association were between dependent variable and each independent variables. Association were interpreted if p<0.05. In the next stage, a multiple logistic regression method was employed to control for possible confounding by socio-demographic factors and clinical characteristics of leprosy.

First ethical approval was obtained from University of Gondar Ethical Review Committee then ALERT leprosy specialized hospital ethical committee authorized the final ethical clearance.Informed consent was obtained from patients who were willing to participate in the study. Confidentiality was maintained by omitting participant’s personal identification. 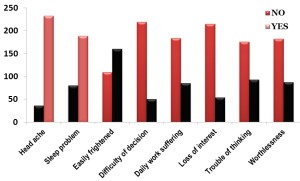 FIG. 1: FREQUENCY OF SYMPTOMS OF MENTAL DISTRESS IN LEPROSY PATIENTS

Of respondents 24(71.1%) and 45(54.2%) which had social stigma and perceived stigma had mental distress respectively. Respondents with no support from family or friends had 59(71.1%) mental distress (Table 3).

DISCUSSION: Many leprosy patients attend clinics with multiple and vague somatic complaints that cannot be explained by any known anatomical or physiological abnormalities.

This higher prevalence in our current study might reflect the particular psycho-social stresses experienced by leprosy patients. Individuals with leprosy have emotional stress and anxiety, which may lead to both psychological and psychiatric morbidity 6, 7.

This current prevalence is lower compared with the previous comparative study done in ALERT hospital in leprosy patients and patients with skin disease that revealed prevalence of mental distress to be 52.4 %(25).This difference could be the sample size  taken is small in this study.

Being in any form of employment seems to be protective against mental distress.

In this finding farmer respondents with AOR= 0.32(95%CI; 0.06, 1.61) were protective for mental distress which is in contrary with previous study done in leprosy patients by R. Leekassa et al., 25 in which farmers were risk factors for mental distress.

In this study, we had expected to find a higher prevalence of mental distress in female leprosy patients than males as their life situation is reported to be even harder when they are affected by the disease 26. The finding in this study was to the contrary, and disagrees with the findings of many other studies. It might be that women in this study had reservations about reporting symptoms of mental distress.

Mental distress was significantly associated with disability. It seems that the increase in the level of disability increases the risk of mental distress.

Those working with people affected by leprosy should be concerned about this problem. We know that MDT is the most effective drug treatment to date and has helped greatly in shortening the duration of treatment. However, many patients will still be left with significant Physical disability. Our study highlights that mental distress may lead to further disability.

Attending to the psychological impact of leprosy should form a core part of any rehabilitation Programmes. Specific psychosocial interventions might be developed for those most at risk.

CONCLUSION: This current study showed the overall prevalence of mental distress among leprosy patients in ALERT hospital is high (30.9%). The study instruments allowed identification of non-specific mental distress. Future work should be directed at further characterizing the nature and severity of mental disorder in this group. However, our study has indicated a need for the integration of psychosocial care into current medical treatment of patients with leprosy in ALERT hospital.

ACKNOWLEDGMENT: We would like to express my sincere gratitude to Head department of Midwifery at Mekelle University), Head department of Nursing at Mekelle University and also W/o Zyin secretary of ALERT hospital ethical committee for her assistance. Ato zeleke and Ato Tadesse for collecting the necessary data. All participants included in the study are highly acknowledged for sharing their personal information.