ABSTRACT: Viral gastroenteritis is one of the major causes of childhood mortality in India. About 30 to 50 % gastroenteritis caused by unknown etiological agents. This study was aimed to identify unknown RNA viral etiology and their clinical manifestation with pediatric acute gastroenteritis, conducted at tertiary care hospital of Uttar Pradesh, North India from July 2012 to December 2013. A total of 234 patients with their clinical profiling were enrolled in this study. Identification of viruses was performed by serological (ELISA for rotavirus) and molecular methods (PCR for astrovirus, norovirus and cosavirus). Quantitative and qualitative data analysis performed by Chi-square and student t-test. Total subjects positive for infection was 35%.Co-infection present in 21% cases. Rotavirus, astrovirus, norovirus and cosavirus were detected in 25%, 10%, 7% and 3% subjects respectively. Other than diarrhea, vomiting was a significant symptom (p=0.0002). Severity of diarrhea was more than vomiting with 5.5±2.7 vs. 3.3±2.6 episodes in 24 hrs. Mean duration of symptoms 3.7±9.1. Eighty percent virus positivity were below the age of 6 years (39.2 ±34.6, median=34 months) and 65% males were positive. This study defines the viral etiology and their clinical association with gastroenteritis. This is the first report of prevalence and co-infection of cosavirus in this region. The outcome of the study provides a baseline data which can be used to design and develop the preventive strategies against unknown etiologies like cosavirus.

INTRODUCTION: Gastroenteritis is one of the leading causes of death in children worldwide that accounts 9 percent of childhood mortality. Children who suffer from underlying malnutrition, poor health, and lack of access to medical care are more vulnerable to diarrhea.

Despite the advance molecular diagnostic techniques for the detection of pathogens and case management of acute gastroenteritis, diarrheal diseases are still responsible for a notable amount of childhood deaths. Other than bacteria and parasites, viruses are the main causative agents of epidemic and sporadic diarrhea. More than 20 different types of viruses have been identified as etiological agents for gastroenteritis.

Previous studies showed presence of multiple viruses in gastroenteritis from India 1. Although rotavirus (RV) is known to cause a considerable burden of pediatric diarrheal cases specially in developing countries, but some other viruses like adenovirus, norovirus and astrovirus are also defined as causative agents in diarrhea 2-5.  Rotavirus infections range in presentation from asymptomatic mild infections to severe and sometimes fatal disease. The rotavirus accounts for over 600,000 annual deaths among young children worldwide 6.

The genus Rotavirus (RV) belongs to Reoviridae family is triple-layered icosahedral particles, and their genomes consist of 11 segments of double-stranded RNA. Rotavirus genotypes are classified according to the genetic and antigenic diversity of the two outer capsid proteins, VP4 andVP7. These proteins independently induce type-specific neutralizing antibodies and form the basis of the present dual classification of rotaviruses into P (protease sensitive) and G (glycoprotein) subtypes, respectively 7.

Human astrovirus (AstV) is identified as one of the common causes of childhood gastroenteritis along with norovirus and rotavirus. Astrovirinae family consist of non-lipid enveloped, icosahedral single-stranded positive-sense RNA genome of size between 6.4 to 7.3 kb. The genome is divided into three open reading frames (ORFs): ORF1a (non-structural protein NsP1a), ORF1b (non-structural protein NsP1b) and ORF2 (capsid protein). ORF1a region shows a 3C-like serine protease motif; ORF1b region encodes the viral RNA-dependent RNA polymerase (RdRp) and possess having a poly (A) tail at the end of the 3’ region, without cap structure at the 5’ end. In humans, eight well-characterized AstV serotypes (HAstV 1–8) have been reported  in addition to the newly identified species, AstV MLB-1 and 2, AstV-VA1, AstV-HMO-A, and AstV-HMO-B 9.

Recently some other viruses like parechovirus, bocavirus, saffold virus and cosavirus are reported in gastroenteritis cases though their disease association is not clear 10-12.

(i)Patients and clinical sample: A total of 234 stool samples from the equal number of North Indian children with gastroenteritis under the age of 12 years were collected from July2012 to December 2013. Children enrolled in this study were fulfilled the criteria of World Health Organization (WHO) definition of gastroenteritis includes three or more loose stools or any vomiting in 24hr. All stool samples were previously screened for presence of enteric bacteria and other known pathogens in the Department of Microbiology, Sanjay Gandhi Post Graduate Institute of Medical Sciences (SGPGIMS), Lucknow. All the subjects having bloody diarrhea or diarrhea with more than 14 days were excluded. This study was approved by Institutional ethics committee. Only the patients with informed written consent from parents/ guardians were included in this study.

Samples processing was done by making 10% stool suspension in phosphate buffer saline, followed by vortexing at mechanical shaker for 20 min and centrifugation at 3000 x g for 20 min to pellet particulate matter, the supernatant then passed through a 0.45 μm filter. Filtrate was transferred in cryovials and stored at -20°C until use.

For RT PCR cDNA was prepared by using 200 unit of Super Script III RT (Reverse Transcriptase, Invitrogen) with 100 pmol of random hexamer primer, dNTP mix (10 pmol each), 1X buffer, 5mM DTT, 40unit RNase inhibitor (Roche) and 10µl of RNA in total of 20 µl of reaction volume according to manufacturer’s protocol. 2 µl of cDNA were used for the first round of PCR and in nested PCR1µl of first PCR products was used as a template for second round PCR in 50µl reaction volume. Total 35 PCR cycles were performed and the amplified PCR product were analysed by 2% (w/v) agarose gel electrophoresis. Molecular weight marker along with PCR product were run in each batch and visualized in UV transilluminator. Bands of 106 and 123 bp for norovirus (Fig.1A) 449 bp for astrovirus (Fig.1B), 316 bp and 428 bp (Fig.1C and Fig.1D) for cosavirus were identified. 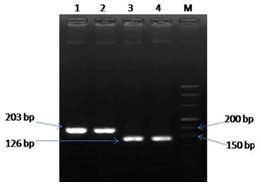 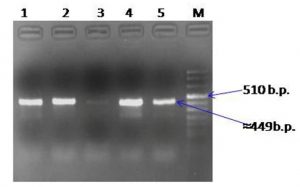 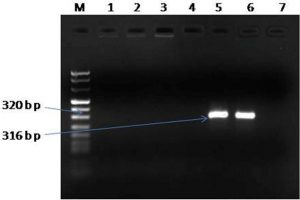 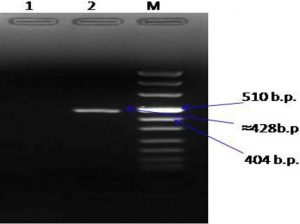 (iii) Statistical analysis: All clinical and demographic data were analyzed by SPSS v16.0. Qualitative and quantitative data comparison were performed by Pearson’s Chi-square test and student t-test, respectively. The clinical data included age of patients, duration of clinical symptoms, duration of diarrhea and vomiting, number of episodes of diarrhea and vomiting in 24 hrs and fever in days. Value of P ≤ 0.05 was considered as significant. The relative risk (RR) with 95% confidence interval (CI) was calculated to find the risk of viral positivity by symptoms. The analysis was performed by using Graph Pad In Stat 3. 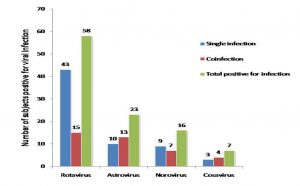 (ii) Comparative clinical symptoms of identified enteric viruses: Overall mean age of all the positive patients was 39.2 ±34.6 months (median=34 months) with maximum positivity (80%) were below age of 6 years (72 months) (Fig. 3) and 65% of infection were present in males. Mean duration of symptoms in patients positive for virus were 3.7±9.1 days. Severity of diarrhea was more than vomiting with 5.5±2.7 vs. 3.3±2.6 episodes in 24 hrs. 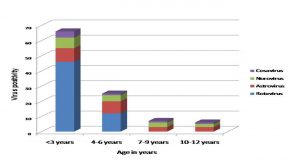 X axis shows the age of the patient in years with 3 years interval and Y axis shows virus positivity.

#Value of P ≤ 0.05 was considered as significant and marked with asterisk (*)

Diarrhea was the main clinical feature of all the enrolled subjects in this study, other than diarrhea, vomiting and fever were the main presenting symptoms. Calculation of RR at 95% confidence interval shows that vomiting was a significant (p=0.0002) feature between samples positive for virus and total samples positive for symptoms (Table 2).

#Value of P≤ 0.05 was considered as significant and marked with asterisk (*)

To know the clinical association of HCoSV infection with gastroenteritis we compare the clinical symptoms between HCoSV infection single and its dual infection with other viruses, duration of symptoms and duration of diarrhea in days were significant with RV (p=0.053 and p=0.0514), age (p=0.0003) with NV and vomiting episodes and diarrhea episodes in 24 hrs (p=0.0294 and p=0.027) were significant with AstV co-infection (Table 3).

There was no significant relation of virus positivity and seasonal variation in year 2012 and 2013. We found sporadic presence of viruses throughout the year, almost in every month any of the screened viruses was present but in rainy season presence of rotavirus was higher from July to September in 2012 and 2013.

TABLE 3: COMPARISON OF QUANTITATIVE CLINICAL PARAMETERS BETWEEN SUBJECTS INFECTED WITH HUMAN COSAVIRUS IN SINGLE AND CO-INFECTION WITH OTHER VIRUSES

#Value of P ≤ 0.05 was considered as significant and marked with asterisk (*)

DISCUSSION: Despite advance molecular approach for the identification of causative agents of diarrhea, still 30 to 50 percent viral etiology are unidentifiable. In developing countries every year more than 2 million deaths occur due to diarrheal diseases in children below the age of 5 years. In India, diarrhea remains an important contributor to childhood deaths, of which 10% are infants and around 14 % of children below 5 year of age 20. Due to substantial progress in efforts of global health agencies the mortality number decreased by approximately 50% from 1990 (12 million) to 2012 (6.6 million). In 2013 more than 130,000 child deaths were reported from India 21. This accounts for roughly one-fourth of all global diarrhea deaths among children under five years of age 22. In 2015 the death rate reduces to 1,400 per day than 18,000 per day in 2012

About 70% of total infectious diarrhea is caused by viruses. The finding of the study defines that pediatric diarrhea in India is associated with multiple viral infections with highest prevalence of rotavirus (25%) followed by astrovirus (10%), norovirus (7%) and cosavirus (3%). This study reports higher co-infection rate (21%) than the previous study from North India 23 and comparable to other parts of India such as Kolkata (Southern India) and Mumbai  (Western India) 1, 24.

The major limitations of the study were lack of control group and short study duration. Only on the basis of statistical analysis on clinical manifestation of cosavirus and its co-infection, we can conclude its significant association with gastroenteritis. Our data only supports the previous studies reported association of cosavirus in gastroenteritis from other countries 16, 28-33. Previously cosavirus was only reported in stool samples of patient suspected for the acute flaccid paralysis (AFP) in India 34. To our knowledge this the first study to define the presence and prevalence of cosavirus in Indian pediatric gastroenteritis patients.

CONCLUSION: In North India rotavirus is a main causative agent of childhood diarrhea. Apart from RV other etiologies like AstV, HCoSV and NV are also involved in diarrhea. In North India viral gastroenteritis has no significant seasonal distribution and present throughout the year. Surveillance program and case control studies should be conducted on regular basis to define the epidemiology and clinical association of virus infection in North India that will help to overcome the disease burden by developing preventive measures. In this study presence of Human cosavirus and its clinical co-relation with gastroenteritis, suggest the implication of more advanced molecular diagnostic approach towards the identification and characterization of unknown etiologies that may be responsible for at least part of undiagnosed diarrheal cases from India.

ACKNOWLEDGMENT: This study is supported by fellowship grant to Richa Kapoor from Indian Council of Medical Research, New Delhi, India (grant no Ref. No: 80/734/2012-ECD-I) We are thankful to Mr. Dinesh Gangwar, Technician, Department of Microbiology, SGPGIMS, Lucknow for collection of diarrheal samples.

CONFLICT OF INTEREST: The authors declare that there is no conflict of interest regarding the publication of this paper