ABSTRACT: Interferon-γ (IFN-γ), a defense molecule, mediates its response against viral infections like Hepatitis B virus by binding to interferon gamma receptor 1 (IFNGR1) on cytotoxic T lymphocytes (CTLs). Hence, interferon gamma receptor 1 (IFNGR1) gene expression is vital in the eradication of the HBV virus. It has been demonstrated by some studies that -56C/T SNPs in IFNGR1 gene promoter region can be correlated with HBV-infection resistance or susceptibility. It has also been shown that -56C SNP has protective effect against HBV infection in comparison to -56T SNP. This motivate us to find out the percentage prevalence of -56C/T SNPs in our healthy population. Genomic DNA was extracted using standard phenol-chloroform method from healthy blood donors. PCR was performed to amplify the 491 bp region of IFNGR1 gene promoter region and digested with AfeI restriction enzyme to observe the -56C/T SNPs. Allele ‘T’ has been observed as the overall dominant allele (65.71%) in our both male (71.79%) and female (58.06%) healthy population

INTRODUCTION: There are more than 400 million chronic carriers of HBV infection worldwide. Depending upon the various genetic and viral factors this chronicity may progress to the end-stage infection-the hepatocellular carcinoma (HCC)1-3. Eradication of the HBV infection from the host required both innate and adaptive immune system 4. MHC class-I restricted cytotoxic T lymphocytes (CTLs) are the main defense molecules against the HBV infection

In response to HBV-infection activated CTLs and natural killer (NK) cells produced interferon-γ (IFN-γ) molecules, which have ability to inhibit viral replication in the host 4-9.

Interferon’s (IFN) are protein molecules which have several other functions including-induction of cell differentiation, inhibition of cell proliferation and angiogenesis, increase in the expression of class I and II MHC molecules, and increase the ability of healthy host cells to resist the new viral infection 10. It has been proved by many studies that CTLs which are activated by HBV-infection can eliminate the infection by inhibiting the viral gene expression and replication by releasing IFN-γ and TNF-α molecule 11. Further, a microarray analysis demonstrated that IFN-γ and its receptor genes are the main fighter molecules in resolution of HBV-infection 12-13.

Interferon-γ receptor 1 (IFNGR1) and interferon-γ receptor 2 (IFNGR2) are the part of a heterodimer receptor which mediate cellular response by IFN-γ molecule. IFNGR1 is responsible for binding of ligand and any change in the structure of this subunit may alter its sensitivity towards IFN-γ.It has been demonstrated by several studies that alterations of any kind in the gene of IFN-γ have an impact on HBV-mediated liver disease 14. Similarly, another study demonstrated the importance of genetic polymorphism of IFNGR1 receptor molecule with respect to the HBV clearance and persistence in their population. They observed a very significant association between the presence of -56C/T regulatory polymorphism in interferon-γ receptor 1 promoter and susceptibility to HBV infection 15. So, looking at the importance of this polymorphism we decided to study the prevalence of this polymorphism in our healthy population.

As described earlier 16-17 a total of 74 healthy volunteers were enrolled in the present study. All the isolates were negative to HCV, HBV and HIV infection with a median age 20.80+1.14 for male & 19.12+1.13 for female volunteers. All the isolates included in this study were from our college Dolphin (P.G) College of Science and Agriculture. The study was approved by the Institutional Ethics Committee (I.E.C) and a written consent was taken from each individual before inclusion in the present study.

DNA was extracted from the blood of our isolates using standard chloroform-phenol method as described earlier 16-17. Primers were designed on the basis of available literature 18-19 and accuracy confirmation was done by using Primer 3 software. The primers were synthesized by Chromous Biotech on payment basis. To validate the amplification results a negative control (using MilliQ water in place of DNA) and a positive control (comprises the amplified 228-bp fragment of LDLR gene) were used.

For amplification of IFNGR1 gene(419 bp)from human DNA, we used single round PCR. For this single round of PCR, final master mixture had 25 μl volume and contained 0.1 µl (5U/µl) DNA Taq polymerase enzyme, 200 µM each of dNTP’s, 1 µM of each primer (Forward primer: 5’-GCCCATCTCAGCCCTGCTCA-3’ & reverse primer: 5’- ATTGTGGCTCGGCTGTGGCC-3’), 3.0 mM MgCl2, 2.5µl of  10x Buffer (NH4+) and 2.5 µl target DNA. The PCR reactions were performed in a mastercyclerusing a cycle profile of 940C for 50 seconds  (denaturation), 630Cfor 50 seconds (annealing) and 720C for 55 seconds (extension) for 36 cycles followed by a final extension at 720C for 8 minutes. Initial denaturation step was performed at 950C for 7 minutes.

IFNGR1 gene has two alleles- allele ‘C’ and allele ‘T’. They can be differentiated by the analysis of restriction fragment length polymorphisms (RFLPs) pattern generated by specific restriction endonuclease enzyme (AfeI) on 419 bp product of IFNGR1 gene. Banding pattern for genotype 56T remains as an intact 419 bp band and for 56C it was 115 & 304 bp bands. The protocol was followed as per the manufacturer’s instructions. Briefly, 11 µl of PCR product of IFNGR1 gene was dispensed in 0.5 ml sterile eppendorf tubes containing 8.5µlMilliQ water followed by 3µl 10X buffer and 2.5µlrestriction endonuclease enzyme (AfeI) and contents were mixed gently by pipetting up and down. After centrifugation for few seconds tubes were incubated at 370C. The reaction was terminated by adding 4µl loading dye and restricted products were run on ethidium bromide stained 3% agarose gel.

For comparison of two independent proportions, the chi square (χ2) or Fischer exact test was used and statistical differences were calculated using Sigma Plot software (version 11.00). Differences were considered significant if P values obtained were found to be less than 0.05 (P<0.05). 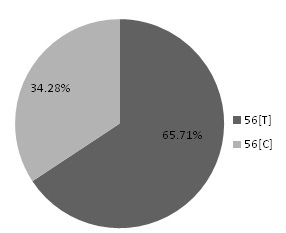 FIG. 4: PERCENTAGE PREVALENCE OF BOTH ALLELES OF IFNGR1 GENE PROMOTER REGION IN MALE AND FEMALE POPULATION

DISCUSSION: Literature showed that IFN-γ/IFNGR1 signaling pathway has a very important role to eradicate the HBV infection 18-19. Polymorphism in IFNGR1 has a direct effect on number of diseases including HBV pathogenesis 19. Some reports demonstrated that -56C/T SNP has a direct effect on IFNGR1 promoter activity 14, 15, 19. It has been shown by a study using reporter gene analysis that allele ‘C’ (-56C promoter variant) has been found to have high transcriptional activity as compared to allele ‘T’ , and hence allele ‘C’ variant have high IFNGR1 molecules which is essential for the accurate and specific working of IFN-γ/IFNGR1 signaling pathway 19. Effect of IFNGR1 polymorphism is context specific. Its effect differed in different cell lines, for example, in human B cell line allele ‘C’ is responsible for low transcriptional activity, have nearly no effect in myeloid cell lines, and increased transcriptional activity in hepatocytes. Hence, with respect to HBV infection pathogenesis allele ‘C’ can provide a better protection than allele ‘T’.

So, allele ‘T’ can be considered as HBV susceptible and allele ‘C’ as HBV resistant allele with respect to counter-attack the HBV infection. In this study we have demonstrated the prevalence of different genotypes of IFNGR1 gene in our healthy isolates. Allele ‘T’ has been observed as the dominant allele (65.71%) in our both male (71.79%) and female (58.06%) healthy population. Allele ‘T’ was found to be more prevalent in male population than female (60.86% vs. 39.13%), whereas allele ‘C’ was found to be more prevalent in female population than male population (54.16% vs. 45.83%).

CONCLUSION: HBV pathogenesis severity not only depends on the viral strain but also on the host genetic factors. This complex combination between the virus-host is responsible for different spectrum of disease. In some cases infection resolved and in some others host met with the final deadly stage of infection i.e.  HCC. Although the different spectrum of HBV-related liver disease is multifactorial, SNPs in different immunogenes have their own role for the observed differences in disease manifesto in different ethnic groups and also at the level of individual 20-21.

So, if we consider polymorphism in IFNGR1 gene as one of the factor for this multifactorial dependent disease, then we are at the risk because more than 65% of our healthy population has HBV-susceptible allele.

This is a small sample size study which is based on the previous observation of this polymorphism in different ethnic population. Hence a large study, which includes patients having persistent HBV infection and resolved disease, must be needed to confirm the same results in our ethnic population.

ACKNOWLEDGMENTS: The authors are very thankful to the Dr. Vinod Mittal (M.D), Dolphin (PG) college of Science and Agriculture, Chunni Kalan, F.G. Sahib, for all the financial support to this study.