PREVALENCE OF ANEMIA AND ITS ASSOCIATED FACTORS AMONG PREGNANT WOMEN ATTENDING ANTENATAL CENTER IN SHARJAH, UAE

PREVALENCE OF ANEMIA AND ITS ASSOCIATED FACTORS AMONG PREGNANT WOMEN ATTENDING ANTENATAL CENTER IN SHARJAH, UAE

ABSTRACT: Anemia during pregnancy is a common complication which can involve a mother’s health, baby’s health, or both. Socioeconomic status is affecting the prevalence of maternal anemia, which is varied substantially across regions and countries. Although, the prevalence of maternal anemia in UAE has not yet been well documented nationwide. Therefore, knowledge of the prevalence and determinants of low hemoglobin (Hb) levels will improve the health of pregnant women and upcoming generations. This study aimed to assess the prevalence of anemia and associated factors among pregnant women in UAE, Sharjah. The present study showed that the overall prevalence of anemia (Hb < 11 g/dl), was estimated to be 28.0%. The majority (16%) had mild anemia. There was no statistically significant difference between the anemic and nonanemic groups regarding socioeconomic and obstetric factors. Since, anemia among pregnant women is considered a moderate public health problem based on the World Health Organization classification of anemia. We recommend further studies to represent the whole nation and to assess the geographic location differences.

INTRODUCTION: Prenatal care is essential preventive healthcare, which decreases the risk of pregnancy complications. Pregnancy complications are health problems which can involve a mother’s health, baby’s health, or both. One of the most common maternal health conditions a woman may experience during pregnancy is Anemia. However, anemia is defined as a hemoglobin (Hb) level of less than 11 g/dL, or hematocrit less than 33%, at any point during pregnancy 1. According to the Centers for Disease Control and Prevention CDC, anemia is defined as hemoglobin and hematocrit lower than 11% and 33% in the first trimester, 10.5% and 32% in the second trimester, and 11% and 33% in the third trimester.

Iron deficiency anemia is the most predominant cause of anemia during pregnancy 3. Approximately 50% of anemia’s due to iron deficiencies 4, and the remaining cases of anemia due to micronutrient deficiencies (e.g. folate, riboflavin, vitamins A and B12), acute and chronic infections (e.g. malaria, cancer, tuberculosis and HIV), and inherited or acquired disorders that affect haemoglobin synthesis, red blood cell production or red blood cell survival (e.g. haemoglobinopathies) 5.

Besides there are many other risk factors associated with maternal anemia that contribute to adverse fetal outcomes such as unhealthy lifestyle, age (<20 years or >35 years old), twin or multiple pregnancies, smoking or alcohol use and history of menstrual disorders 6. Anemia resulting from iron deficiency associated with low birth weight and increased risk of maternal and perinatal mortality 7.

In developing regions, 3.0 million deaths in 2013 were due to maternal and neonatal mortality, which was considered a significant contributor to overall global mortality 1. Also, the Global overall prevalence for low birth weight infants due to Iron deficiency anemia is 15.5% - 20% 1. In the UAE, the rates of low birth weight infants are widespread because of the high prevalence of Iron Deficiency Anemia in pregnancy 8. Moreover, maternal anemia may cause vaginal bleeding during the first trimester and high risk of preterm delivery 9. Therefore, anemia during pregnancy has shown to cause quite substantial consequences.

Of those diagnosed with anemia, only 35.7% compiled with recommendations to supplement with folic acid plus iron. According to the Egypt Demographic and Health Survey reports, the increased use of iron supplements caused a marked reduction in IDA among pregnant women.

Study Setting and Design: A retrospective Cross-sectional descriptive study was conducted in the antenatal center, Sharjah, UAE, with the duration of the study being six months. The data was collected from consecutive check-up examination records of apparently pregnant women in different age groups.

The study included all pregnant women who attended the antenatal center, in the period from 1 January 2018 till the end of June 2018. All the participants are from Arab nationality, and their ages range from 17 to 45 years.

Ethical Principles: The study was conducted only after getting the approval and Permission from the main office in the antenatal center, Sharjah to gain access to previous medical records. The relevant data were collected from the Medical records department based on the ICD-10 definition of anemia in pregnancy from all the records of pregnant women during 1st Jan 2018 - 30th June 2018.

Statistical Analysis: The data management and analysis were initiated by presenting data in the Excel and were transferred into the Statistical Package for Social Science (SPSS) statistics software for further analysis. The data were presented by tables, graphs, and charts. Data were summarized using mean and standard deviation values for anemia and associated factors, number and percentage for categorical variables.

Chi-square test was done for associations. A t-test was done to compare mean values. A p-value<0.05 was considered significant. 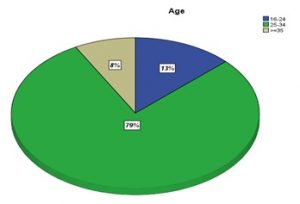 FIG. 1: DISTRIBUTION OF PARTICIPANTS ACCORDING TO AGE 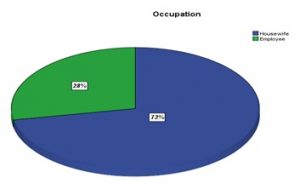 FIG. 2: DISTRIBUTION OF PARTICIPANTS ACCORDING TO THE OCCUPATION 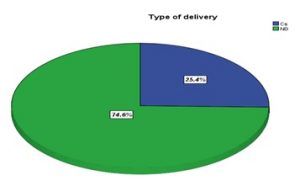 FIG. 3:  DISTRIBUTION OF PARTICIPANTS ACCORDING TO THE TYPE OF DELIVERY 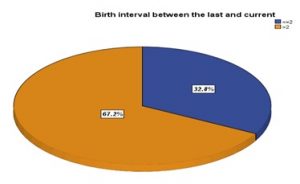 FIG. 4: DISTRIBUTION OF PARTICIPANTS ACCORDING TO THE BIRTH INTERVAL 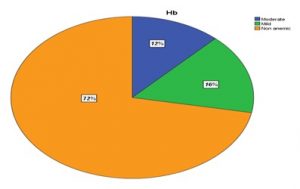 FIG. 5: DISTRIBUTION OF PARTICIPANTS ACCORDING TO THE DEGREE OF ANEMIA 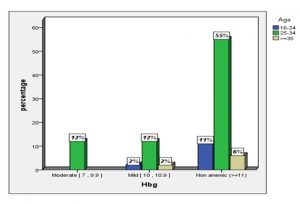 FIG. 6: DISTRIBUTION OF ANEMIA ON THE BASES OF AGE

TABLE 1: SOCIO-DEMOGRAPHIC CHARACTERISTICS OF PREGNANT WOMEN IN THE ANTENATAL CENTER, SHARJAH (No. = 100)

TABLE 3: PREVALENCE AND DEGREE OF ANEMIA AMONG PREGNANT WOMEN

Factors Associated with Anemia Among Pregnant Women: Anemic and non-anemic pregnant women were categorized into three age groups 16-24 years, 25-34, and more than 35 years. Out of 28 anemic women, four were in 1st, and third groups and 24 were in the 2nd group. While out of 72 non-anemic pregnant women 11 were in the 1stgroup, 55 in the 2nd group and 6 in the 3rd group. It was seen that the prevalence of anemia is higher in the 25-34 years age group as compared to other age groups Table 4. There was no statistically significant difference between the anemic and non-anemic groups regarding maternal age and occupation.

Anemia status in pregnant women was shown in Table 5 according to the obstetric factors, which include: type of delivery, number of births, the interval of last birth, and number of cesarean surgeries. There was no statistically significant difference between the anemic and non-anemic groups regarding obstetric characteristics.

Patients were distributed based on complete blood count (CBC) parameters. Out of 100 patients, MCV was low (microcytic) in 31 women, normal (normocytic) in 68 and high (macrocytic) in one woman. The majority, 87 women, had normal MCHC, 12 women had high MCHC, and one had low MCHC at the time of the study. Moreover, 3 and five women had low and high MCH, respectively. While 92 had normal MCH (normochromic). HCT was low in 75 women, and it was average in 2 women and high in 23. R.B.C was low in 90 women, and it was normal in 10 women.

Out of 28 anemic women, the majority had normocytic (55%) and normochromic (92%) anemia. However, there is no statistically significant difference between anemic and non-anemic groups regarding CBC parameters.

TABLE 4: CROSS TABULATION BETWEEN THE SOCIO-DEMOGRAPHIC CHARACTERISTICS AND LEVEL OF Hb (N=100)

TABLE 5: CROSS TABULATION BETWEEN THE OBSTETRIC CHARACTERISTICS AND LEVEL OF Hb (N = 100)

TABLE 6: DISTRIBUTION OF PATIENTS ON THE BASIS OF CBC PARAMETERS

TABLE 7: CROSS TABULATION BETWEEN THE CBC PARAMETERS AND LEVEL OF Hb

In the present study based on the blood picture of 100 pregnant women, the overall prevalence of anemia is 28%. This prevalence is considered a moderate public health problem 14. Our findings are close to the results reported from neighboring countries which specified that prevalence of anemia among pregnant women in Qatar 28%, Syrian Arab Republic 30%, Jordan 27%, Lebanon 27%, Libya 28%, United Arab Emirates 26%, Sri Lanka 26% and Iran, Islamic Rep 26% 14, 15.

The majority of pregnant women were housewives (72%) while the employees were (28%). In the current study, there is no statistically significant difference between the anemic group and the non-anemic group regarding occupation. This is in contrast to a result of a study conducted by Hala M et al., which found that the risk of anemia was higher among housewives as compared with employees 21. This difference may be due to the small sample size in the present study compared to other studies.

Moving onto the obstetric history of the patient, our study depicted that the majority of cases of anemia underwent normal deliveries. When associating anemia with the type of previous deliveries of the patient, it was concluded that no statistical y significant difference between the anemic and non-anemic group regarding the type of delivery.

From those who have previous deliveries (67), most of the participants had (1-2) previous births or living children (54), birth interval more than 2 years (45) and one or less cesarean surgery (94%). However, investigating the possible risk factors associated with anemia among the participants revealed that no statistically significant difference between the anemic and non-anemic group regarding a number of births, birth interval and number of cesarean surgeries.

On the contrary to our results, a study conducted among pregnant women in Sokoto, Nigeria specified that anemia was highly prevalent in women with multiple previous births. It also stated a number of living children as being one of the potential etiological factors of anemia in pregnancy 22. Another study revealed that the risk of getting anemia increase as the number of births increase 23. Also, a cross-sectional study revealed that pregnant women having birth interval less than two years were at higher risk of becoming anemic as compared to those with a birth interval for more than two years 17. These differences are according to the small sample size and the setting (one medical center) of the current study.

Moreover, a study conducted in Yemen showed that pregnant women who underwent two or more cesarean surgeries were found to have an increased risk of anemia during pregnancy 24. Another study revealed that cesarean sections are accompanied by the risk of suffering serious complications, including hemorrhage, infection, and rupture of the uterus 25.

CONCLUSION: The overall prevalence of anemia among women attending the antenatal center in Sharjah was 28%, so anemia is considered a moderate public health problem. Sociodemographic factors (age, occupation), obstetric factors (a type of delivery, number of births, birth interval, number of cesarean surgeries), and CBC parameters were not significantly associated with anemia. We recommend further studies to represent the whole nation and to assess the geographic location differences.

COMPETING INTEREST: The authors declare no conflict of interest.