PREVALENCE OF HIV INFECTION IN EAST REGION OF INDIA

PREVALENCE OF HIV INFECTION IN EAST REGION OF INDIA

ABSTRACT:AIDS is syndrome of a set of disease, which is caused by HIV I and II. These viruses mainly destroy the lymphocytes which play a major role in our body immune system. Till now, there is not taken exactly prevention on this virus. Although some antiviral drugs are produced which make a preventive barrier out of the lymphocytes cells of patient’s blood but there is no way to kill the virus properly. The present work was carried out to find the prevalence of HIV in East Region of India. A total 717 patients were screened for the presence of HIV in their blood by various ELISA methods. It has been concluded that out of 717 patients 219 patients were infected with HIV and in between 15 to 45 ages, the infection rate is high both in male and female as increasing their age and increasing to their age the infection rate of HIV of male is increases where as female is decreases. So prevalence of HIV is an emerging reality in East Region of India among middle age and male persons.

INTRODUCTION:According to the United Nations Joint Program on HIV/AIDS (UNAIDS), at the end of 2010, an estimated 34 million people with AIDS living within the world 1. The highest number of patients (22.9 million) is reported from sub-Saharan Africa (31.6-35.2 million) 2.

India harbours the third largest number of HIV infected individuals in the world. India, with more than 1 billion residents, is considered to be one the most thickly populated countries in the world. Amongst them, about 2.4 million are presently suffering from Human Immunodeficiency Virus (HIV).

Though as per the Aids Report 2011 published by the United Nations, new HIV infectivity in India has declined at the rate of 50 % during the past 10 years. Several States in India have now reported the presence of HIV-2 after the first case was reported from Mumbai in 19914.

The 2006 estimates indicate that the epidemic has stabilised or seen a drop in Tamil Nadu and other southern states with a high HIV burden. Yet, new areas have seen a rise in HIV prevalence, particularly in the northern and eastern regions.

Twenty-six districts have been identified with high prevalence, largely in the states of Madhya Pradesh, Uttar Pradesh, West Bengal, Orissa, Rajasthan and Bihar 3.

In case of East Region of India there are a host of social, cultural and economic factors that influence the spread of HIV infection and increase the vulnerability of the epidemic.

Poverty is associated with weak endowments of human and financial resources – low levels of education with associated low levels of literacy and few marketable skills, generally poor health status and low labour productivity as a result. A crucial aspect of the health status of the poor is the high prevalence of undiagnosed and untreated sexually transmitted infections – STIs (or sexually transmitted diseases – STDs), a significant co-factor in HIV transmission. EAST REGION OF INDIA shares international borders with Bangladesh, Bhutan and Nepal.

A range of socio-economic factors in the region along with weak regulatory measures have led to burgeoning human trafficking across these borders, particularly in women and children. East region of India is both a destination and a conduit for trafficking in humans, many of whom face sexual exploitation. There is also a source of human trafficking bound for western India and beyond Indian shores to West Asia.

Trafficking and sexual exploitation constitute a potent combination that facilitates the spread of HIV in the region 4.

The present study undertaken at Calcutta School of Tropical Medicine, Kolkata was aimed to find the prevalence of HIV among the different age groups of East Region of India.

MATERIAL AND METHODS: All patients who donated blood at the Calcutta School of Tropical Medicine, Govt. of West Bengal, Kolkata-700073 (The Centre of Excellence in HIV-Certified by NACO) were included in the study. The donors were age group 1-60 yr. All donors were subjected to a pre-test counselling which was done by qualified staff trained to screen donors.

TABLE 2: SHOWING THE HIV INFECTED PATIENTS AMONG TOTAL NUMBER OF PATIENTS ACCORDING TO VARIOUS AGE GROUPS 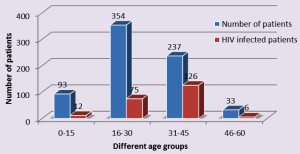 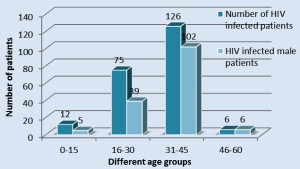 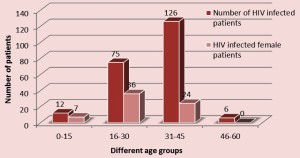 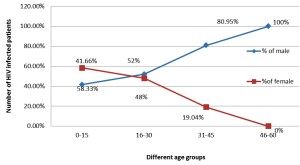 In contrast to the common perception that HIV is transmitted predominantly through injecting drug use and sex between men, the overwhelming majority of infections occur through heterosexual sex7.  In many cases married men have acted as 'bridge populations' between vulnerable populations and general populations; women who believe they are in monogamous relationships are becoming infected because their husbands have had multiple sexual partners. Often social norms restrict women from making decisions about their sexual relations, contributing to their vulnerability to HIV 8. Another significant trend is that most of the people becoming infected are in the sexually active and economically productive 15 to 44 age group. This means that most people living with HIV are in the prime of their working lives. Many are supporting families.

In case highest male HIV infected patients in this study belong to 31-45 age groups (80.99%) which is a thread for INDIA, but if we see the possibility or reasons, there may be many causes such as-

Truck drivers: In east region of India has largest road networks because it nearer to BANLADESH boarder and BAY OF BENGAL, involving millions of drivers and helpers. Truck drivers spend long periods of time away from home, and it is common practice for them to have relations with sex workers while on the road. A 2008 study showed that nearly a third of the long-distance truckers had paid for sex in the past twelve months 9. Sometimes, relations with sex workers occur at roadside ‘dhabas’, which act as both brothels and hotels for truck drivers. In other cases, drivers stop to pick up women by the side of the road, and transport them to another area after they have had sex with them. Both truck drivers and sex workers move from area to area, often unaware that they are infected with HIV.

Injecting drug users: Transmission through injecting drug use is a major driving factor in the spread of HIV. The alarming levels of infection occurring through needle-sharing have implications that extends beyond networks of drug users. Some of those who inject drugs are also sex workers or truck drivers, and many are sexually active, which can result in infection being passed on to their partners.

Migrant workers: A large number of people move around India for work; it is estimated that 258 million adults in India are migrants; the majority are men migrating for employment 10. Studies from across the world have linked migration to multiple sexual partners and increased HIV transmission 11. It has been said that migrants and other mobile individuals are bridge populations for HIV transmission from urban to rural areas and between high-risk and low-risk groups.

Long working hours, isolation from their family and movement between areas may increase the likelihood that an individual will become involved in casual sexual relationships, which in turn may increase the risk of HIV transmission. In many cases, migration does not change an individual’s sexual behaviour, but leads them to take their established sexual behaviour to areas where there is a higher prevalence of HIV. Therefore not all migrants are at equal risk of HIV. But in this study 0-15 age group female patients were more affected (58.33%) and also middle age groups (48%). Generally women are at a greater risk of heterosexual transmission of HIV. Biologically women are twice more likely to become infected with HIV through unprotected heterosexual intercourse than men. In many countries women are less likely to be able to negotiate condom use and are more likely to be subjected to non-consensual sex 12, 13.

A large proportion of women with HIV appear to have acquired the virus from regular partners who were infected during paid sex. HIV prevention efforts targeted at sex workers are being implemented.

Indeed, condom use is limited especially when commercial encounters take place in “risky” locations with low police tolerance for this activity. In addition, interventions tend to primarily target brothel-based sex workers, who represent a minority of sex workers. HIV information and awareness among sex workers appears to be low, especially among those working in the streets.

Low Status of Women: Infection rates have been on the increase among women and infants as the epidemic spreads through bridging population groups. As in many other countries, unequal power relations and the low status of women, as expressed by limited access to human, financial, and economic assets, weakens the ability of women to protect themselves and negotiate safer sex, thereby increasing their vulnerability 15.

CONCLUSION: In East Region of India, HIV-related counseling services are still not readily available. Systematic efforts to eliminate stigma should be continued and establishments of voluntary counseling and testing centers (VCTCs) at the district level are expected to play a major role in this direction. The main barriers to effective control of AIDS are reported to be insufficient resources, illiteracy, and stigma, there is a need to assess if the prevention and control efforts are directed to the right populations and if appropriate programmers are in place and are working optimally.

REFERENCE:AIDS is less of a medical problem, but more of a social, cultural and developmental problem. Thus, there is probably not going to be an easy solution. Short-term strategies like aggressive case detection and management of STDs, condom promotion, blood safety and drug de-addiction programmers might yield quick results. However, they should be effectively complemented by a multidisciplinary approach and long-term strategies for HIV prevention and control.