ABSTRACTMetabolic syndrome (MetS) is a clustering of metabolic abnormalities that has close association with cardiovascular mortality. MetS has becoming a major challenge for public health. To get insight knowledge about the MetS in diabetes, this population-based study was designed. Here we assessed the MetS in diabetes from a coastal region of Bangladesh. MetS was estimated by using the modified definition of the National Cholesterol Education Program Adult Treatment Panel III. A total of 500 patients visiting to a diabetic clinic were included in this study. Anthropometric, clinical and biochemical data were recorded. Our result revealed that, about 47.00% patients with type 2 diabetic mellitus were suffering from metabolic syndrome. Female were more prevalent than male (58.6% vs 36.14%) for suffering from MetS. Among other risk factors for MetS, obesity and hypertriglyceridemia followed by low-HDL were more prevalent in female. In contrast, male were more likely to have low-HDL and hypertriglyceridemia followed by high blood pressure. Since diabetic patients are more porn to suffer from MetS, and it becomes a major risk factor for cardiovascular disease, correct measurement should be taken to identify MetS among different population to reduce the high abnormalities

INTRODUCTION: Diabetes mellitus (T2DM) is becoming a pandemic worldwide 1, 2 due to the global increase in obesity and sedentary lifestyles 3. T2DM is associated with increased morbidity and mortality. The highest prevalence of this disease is likely to be in developing countries with the highest percentage in the Middle –East, Sub-saharan Africa, South Asia and Latin America 4. A published report 4 estimated 3.2 million diabetic subjects in 2000 and the number is expected to increase to a staggering 11.1 million by 2030 in Bangladesh. The metabolic syndrome (MetS) is a cluster of obesity, hyperglycemia, decreased high-density lipoprotein (HDL), increased triglyceride and high blood pressure 5. The MetS, as a driver of current epidemics of diabetes 6 and cardiovascular diseases 7, has become a major challenge to public health.  Even in adults without diabetes, MetS is associated with an increased all-cause and cardiovascular mortality 8, 9, 10. Despite these adverse associations, it is illusive whether the syndrome is a disease entity, by itself, or just a mere constellation of risk factors. A current estimation reveals about 20-30% of the adult population worldwide is affected by the MetS 11.

The detection, prevention and treatment of the MetS components considered as an important factor for the minimizing the risk of cardiovascular disease. Thus identification of the population at risk is an important task.

MATERIALS AND METHODS: In a community-based, cross-sectional and randomized study, a total of 500 diabetic patients of different age groups were screened from Noakhali municipality, a coastal area of Bangladesh. These patients were visited to a diabetes outpatient clinic in Noakhali. Ethical clearance was obtained from the ethical review board of the institution. Informed consent was obtained from all the participants prior to their inclusion into the study.

Definition and diagnosis of Diabetes Mellitus: The term diabetes mellitus describes a metabolic disorder of multiple aetiology characterized by chronic hyperglycaemia with disturbances of carbohydrate, fat and protein metabolism resulting from defects in insulin secretion, insulin action, or both.

The clinical diagnosis of diabetes is often prompted by symptoms such as increased thirst and urine volume, recurrent infections, unexplained weight loss and, in severe cases, drowsiness and coma; high levels of glycosuria are usually present. In this study, we diagnosed diabetes mellitus as per a recommendation from WHO, considering the value of fasting plasma glucose level to 7.0 mmol/L or above 14.

Definition of the metabolic syndrome: MetS follows the criteria proposed by the Third Report of the National Cholesterol Education Program Expert Panel on the Detection, Evaluation, and Treatment of High Blood Cholesterol in Adults (NCEP ATP III)15. The NCEP ATP III criteria comprise 3 or more of the following: (1) fasting plasma glucose level of at least 110 mg/dL (6.1 mmol/L); (2) serum triglyceride level of at least 150 mg/dL (1.7 mmol/l) for men; (3) serum high-density lipoprotein (HDL) cholesterol level lower than 40 mg/dL (1.04 mmol/L) for men and lower than 50 mg/dL (1.29 mmol/L) for women; (4) Blood Pressure of at least 130/85 mm Hg or controlled with antihypertensive treatment; and/or (5) waist circumference of more than 102 cm (Adult Treatment Plan III 2001). The NCEP ATP III definition does not specify that any particular component be present and implies that if a person has several risk factors, even if they are not very severe, their joint contribution can still markedly increase the risk of coronary heart disease.

Prevalence of metabolic syndrome among diabetic patients: Total cohort included 500 patients visiting to a diabetic clinic, out of which 51.2% (n= 256) were male and 48.8 % (n= 244) were female. The mean age of the total study population was 47.12 years (SD 11.9 year; Range 22-70). Table 1 presents the characteristics of the study population. Most of the participants were of secondary educated (Figure 1).

TABLE 1: CHARACTERISTICS OF THE STUDY POPULATION 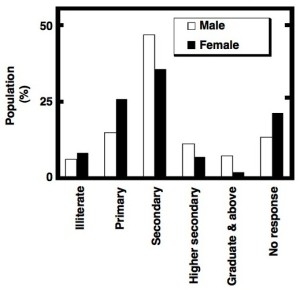 A total of 500 patients visiting to a diabetes clinic were interviewed to know their educational background and the answers were recorded. Percentage of population in each educational level was calculated for male and female separately.

Among 500 patients, 83.4% (n=417) population showed high fasting glucose (> 7.0 mmol/L) level. These 417 patients were further evaluated for studying the prevalence of metabolic syndrome. Considering this condition, we found 47.00% patients with T2DM were suffering from metabolic syndrome out of which 58.6% were female and 36.14% were male. Patients within the age group of 55-64 years are having the highest prevalence of metabolic syndrome (Figure. 2). The incidence of MetS was found to increase with age. However, due to poor response by the patients over 65 years age, prevalence of MetS of this group was estimated to be lower than the age group of 55-64 years.  In all the age groups, female patients showed highest percentage than male (data not shown). 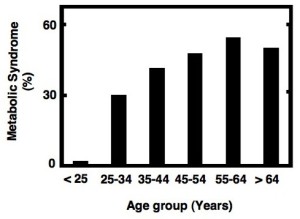 FIGURE 2: PREVALENCE OF METABOLIC SYNDROME AMONG DIABETES BY AGE

TABLE 2: ANTHROPOMETRIC, CLINICAL AND BIOCHEMICAL CHARACTERISTICS OF THE STUDY POPULATION

Prevalence of different components of metabolic syndrome assessed in the diabetic subjects are presented in the table 3. Among the different components, prevalence of hyperglycemia was 76.28% with the prevalence in male being 81.04% and female 72.12%. Obesity (High BMI) and hypertiglyceridemia followed by low-HDL were more prevalent in female. In contrast, male were more likely to have low-HDL and hypertriglyceridemia followed by high blood pressure. However, hypertriglyceridemia is the major risk factors in total population (Table 3). Contributions to develop MetS by the different risk factors are presented in figure 3. About 38% populations suffered from combined effect of glucose impairment, hypertriglyceridemia and obesity, whereas 22% population is effected due to the presence of four components.

TABLE 3: PREVALENCE OF DIFFERENT COMPONENTS OF METS BY SEX AMONG STUDY POPULATION 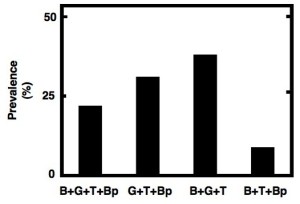 Our data also documented high prevalence of metabolic syndrome among diabetic women as compared to diabetic men. This is the similar result as reported by Prabhakaran et al 22.

Furthermore, in the present study, the prevalence of MetS is increased with age but a slight declined was noted after age of 65, consistent with findings reported in India 23.

The overall prevalence of hypertension is this study was estimated as 31.08%. In terms of gender specificity, 29.15% female and 33.23% male were suffering from hypertension. Recent reports conducted among the urban women in Bangladesh, showed 29.43% prevalent for MetS12.

Therefore, it is imperative that aggressive therapy be aimed at controlling dysglycemia, dyslipidemia and hypertension. Furthermore, health care professionals must be more careful to patients with metabolic syndrome in averting or delaying progression to diabetes, cardiovascular disease, and other complications.

We recognized some limitations in this study. Firstly, the sample size was not so large and thus a comprehensive prevalence study is required among the Bangladeshi diabetic patients. Secondly, the study population consists of regularly followed up patients in an outpatient clinic and therefore the effects of treatment (antidiabetes, antihypertensive, statins etc) were not included in the study.

CONCLUSION: Our data reveals that metabolic syndrome is common among diabetic patients. Since patients with T2DM carry a cluster of cardiovascular risk factor, proper measurement to identify the MetS among this population is of great importance. Furthermore, non-diabetic individuals with metabolic syndrome should be identified from the general population and screened regularly.