PREVALENCE OF URINARY TRACT INFECTIONS AND RELATED ANTI-MICROBIAL RESISTANCE IN INDIA: A SYSTEMATIC REVIEW AND META-ANALYSIS

PREVALENCE OF URINARY TRACT INFECTIONS AND RELATED ANTI-MICROBIAL RESISTANCE IN INDIA: A SYSTEMATIC REVIEW AND META-ANALYSIS

ABSTRACT: Background: Urinary Tract Infections (UTIs) are one of the most commonly occurring infections in medical practice despite the widespread availability of antibiotics. This study aims to ascertain the prevalence of uropathogens and determine their antibiotic susceptibility or resistance patterns in the Indian population. Methods: A thorough search on the research studies concerning UTIs and their antibiotic susceptibility patterns in India was conducted through electronic databases including Google Scholar, Directory of Open Access Journals, Web of Science, Elsevier, etc. Search results were evaluated for the appropriateness of being included in the study. A total of 12 reports published from different regions of India were involved in the study. Analysis of data was performed using Comprehensive Meta-Analysis (CMA) software. Results: The most commonly isolated uropathogens were observed to be E. coli, and Klebsiella spp., with a prevalence of 49.6% and 12.8%, respectively. The highest mean resistance was found to be towards Ciprofloxacin, followed by Ampicillin. Resistance patterns in E.coli were found to be more towards Ampicillin (74.11%) and followed by Ciprofloxacin (61.32%). In the other uncommon uropathogens, the highest resistance was recorded towards Ampicillin (62.98%) and Ceftriaxone (62.7%). Conclusions: Over the past years, the resistance levels have been increasing gradually to the traditional drugs used for the treatment of UTI, and hence, a therapy based on the individual culture report and antibiotic sensitivity test is highly encouraged. The use of combinational drugs in the treatment of common infections may help reduce the spiking levels of resistance.

INTRODUCTION: Urinary Tract Infections (UTIs) are one of the most commonly occurring infections in medical practice despite the widespread availability of antibiotics 1. Additional expenditures are incurred, costing billions of dollars worldwide, as these infections affect several people across the globe 2.

UTIs occur in both men and women, but the incidence rate in women is higher when compared to men. Nearly half of the women population experience at least 1 episode of UTI in their lifetime, with 20-40% of them exhibiting recurrent episodes 3.

UTIs may involve the upper and the lower urinary tracts, with the lower UTIs being defined as cystitis and characterized by symptoms of dysuria, suprapubic tenderness, frequency, and urgency 4. The most common pathogens causing UTIs include Escherichia coli and Staphylococcus saprophyticus followed by Klebsiella pneumoniae and Proteus spp 3.

Treatment is generally done with broad-spectrum antibiotics due to the concerns of antibiotic resistance. Fluoroquinolones were the most preferred initial agents as a part of the empirical therapy of the infections but are being limited due to high resistance rates and toxicity 5, 6.

Treatment may become challenging with the presence of risk factors like elderly age, immune-suppression, and other comorbidities. The extensive use of antibiotics over a period has stemmed from the development of antibiotic resistance, which has now become a problem worldwide. Since the etiology and antibiotic resistance of the uropathogens has not been constant over the years, the resistance patterns have not been studied extensively. Poor patient compliance leading to an incomplete course of antibiotic therapy has directed towards resistance to most of the antibiotics 7. The selection of anti-microbial agents should not be decided by the most likely pathogen, but should rather be decided based on the susceptibility patterns. Hence, it is very important to know the patterns of local anti-microbial susceptibility to determine sensible and careful empirical therapy for the treatment of UTIs. To prescribe appropriate antibiotic therapy, the physician must have the required information about the cause of the infection as well as the susceptibility patterns. Therefore, it is important to determine the causative agents of UTI and their resistance patterns locally, in each region, so that a better and targeted therapy can be started before the culture and antibiotic sensitivity results, as these reports take long for processing 8, 9. The current study is carried out by systematic review and meta-analysis of various studies in the field of bacterial drug resistance in UTIs to get more accurate and specific results.

A thorough exploration of research papers on the most common bacteria causing UTIs and their antibiotic resistance patterns in India was conducted through online electronic databases including Google Scholar, Scopus, PubMed, Embase, Directory of Open Access Journals (DOAJ), and Web of Science. Keywords involved were Urinary Tract Infections, Antibiotic Resistance, India, Gram-negative bacteria, and Gram-positive bacteria. The search results were evaluated, and their appropriateness and potentiality to be included in the study were determined. All the studies in the English language between the years 2000 to 2020 which reported the prevalence of uropathogens and their antibiotic resistance patterns among the Indian patients were studied systematically.

Inclusion and Exclusion Criteria: All cohort and cross-sectional studies that were associated with the antibiotic resistance patterns of various bacterial pathogens in UTIs were included. Studies that had derisory information, studies that were related to infections other than UTIs, review articles, congress and meeting abstracts, case reports, and research papers in languages other than English were excluded. To avoid bias, the search was carried out by two researchers independently.

Data Extraction: A special form was designed for researchers, which included data such as; the main author's name, year of publication, time and location of study, sample size, gender, average age, UTI causing bacterial pathogens, its prevalence, and resistance to various antibiotics.

Statistical Analysis: Analysis of data was performed using comprehensive meta-analysis (CMA) software. For the calculation of the event rate of UTI and anti-microbial resistance in each study, the sample numbers were determined and were used to calculate the variance.

Relative weights were allotted to each study. Calculations were reported by a 95% confidence interval. Due to the prevalence of heterogeneity in the studies, a random-effects model was used in the calculations.

RESULTS: Initially, a total of 93 articles were collected from different databases, which presented the relevant information. Based on the location and time of the study, about 36 of these articles were excluded based on the required criteria. Studies with inappropriate full text, review articles, and articles which emphasized only the susceptible patterns of uropathogens were excluded, resulting in 16 articles to be reviewed. Of these, 4 articles were found to be repetitive and were excluded. This resulted in the selection of 12 studies from different regions of the country to be analyzed. 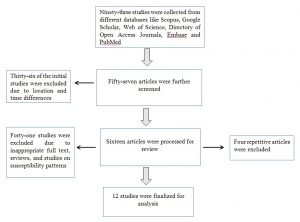 FIG. 1: FLOW-CHART DEPICTING THE PROCESS FOR THE SELECTION OF ARTICLES FOR META-ANALYSIS

More than half of the selected studies reported a higher affected population in women (about 43.31%) than men (30.69%). The most commonly isolated uropathogens were E. coli, and Klebsiella spp., with a prevalence of 49.6% and 12.8%, respectively. Other isolated organisms included Proteus spp., Staphylococcus spp., Enterococcus spp., Pseudomonas spp., Enterobacter spp., Acinetobacter spp., Citrobacter spp. along with species from Providencia, Morganella, Streptococcus, Aeromonas, and Serratia with a marginal frequency. 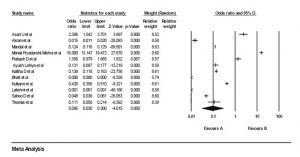 FIG. 2: FOREST PLOT ON THE META-ANALYSIS ON THE PREVALENCE OF UTI IN DIFFERENT STUDIES

The meta-analysis was performed on studies from different parts of India. General data from each study is represented in Table 1. All of the studies were published between 2006 and 2018 and included the aspects of the prevalence of UTIs in the population along with the resistance profiles of the uropathogens. A forest plot based on the odds ratio of prevalence of uropathogens Fig. 2, indicates greater chances for the occurrence of infections in patients.

TABLE 1:  GENERAL DATA ACQUIRED FROM THE STUDIES IN THE META-ANALYSIS

TABLE 2: REPRESENTATION OF THE EVENT RATES OF VARIOUS ORGANISMS IN THE STUDIES

The organisms isolated in the selected studies, along with their event rates, are represented in Table 2. The event rate of E. coli was found to be the greatest, followed by Klebsiella pneumoniae. Other common organisms isolated in all studies were Proteus spp., Staphylococcus spp., Pseudomonas spp., Enterobacter spp., Acinetobacter spp., Enterococcus, and Citrobacter spp. Other organisms included Providencia, Morganella, Streptococcus, Aeromonas, and Serratia spp. Measurement of heterogeneity in the uropathogens isolated in each study produces an I2 value of 99.925, indicating considerable heterogeneity 22. Fig. 3 represents a funnel plot for the selected studies that exhibited asymmetry, indicating a publication bias either as delayed publication bias or a location bias 23.

TABLE 3: A META-ANALYSIS OF THE ISOLATED UROPATHOGENS IN THE STUDY 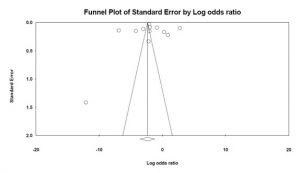 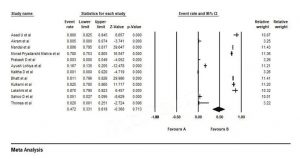 DISCUSSION: The current study highlights the prevalence of UTIs to be more in women than in men. This comparison is similar to the results of other studies in regions like Gujarat 24, Patna 25, Rajasthan 3, and New Delhi 26. The male urethra is13-20 cm long, whereas females possess a shorter urethra, approximately 3.8 to 5.1 cm long. This shortness of the urethra in women, along with proximity to the anal orifice, anatomically poses a greater risk of infection in women 27, 28. There have been associations established between infections in the tract and sexual intercourse, use of spermicides, increasing age, menopause, and history of UTI 29, 30. The most commonly isolated uropathogen was E. coli, bearing resemblance with the studies in Dehradun 6 by Biswas et al., and in Haryana 31 by Arora G et al. Following E.coli were Klebsiella spp. in terms of prevalence, these results find similarity with the studies conducted in Nairobi 32, Iran 33, and Sri Lanka 34.

CONCLUSION: The increasing levels of antibiotic resistance in different regions of the country indicate alarming changes in the prescription patterns of antibiotics, a decrease in the OTC use of antibiotics for different conditions, and standardization in the manufacturing unit to avoid the distribution of spurious antibiotics. The prevalence of and resistance levels of E. coli was found to be very common among all the studies. This emphasizes a need for regular monitoring of the resistance levels of the organisms among the urban and rural populations. Over the past years, the resistance levels have constantly been increasing to the traditional drugs used for the treatment of UTI, and hence, a therapy based on the individual culture report and antibiotic sensitivity test is highly encouraged. Drugs like Ampicillin, Ciprofloxacin, Ceftazidime, Gentamicin, and Ceftriaxone, commonly used to treat various infections, are most resistant to different organisms. The use of combinational drugs in the treatment of common infections may help reduce the spiking levels of resistance.

ACKNOWLEDGEMENT: We would like to express our gratitude to our beloved Principal Dr. V.Alagarsamy and Vice-Principal Dr. P. Subhash Chandra Bose for their constant encouragement and support.