ABSTRACT: Gujarat has the second largest mangrove ecosystem in India, and mangrove ecosystems are known for their extreme environments and hence extremophiles that can produce novel enzymes can be found in these extreme environments. In this study, ninety-three bacterial isolates were obtained in pure cultures from soil samples collected from Kandla, Mundra and Tuna of the Kutch region of Gujarat in the winter season. These isolates were plate-screened for their ability to produce six extracellular enzyme activities using their respective methods in order to find new isolates for their possible applications. Six enzymes amylase, lipase, protease, cellulase, oxidase, and catalase were mostly present in these isolates. The isolates were also screened for their ability to produce the bioplastic Polyhydroxybutyrate (PHB). Further, these isolates were tested for their ability to survive at different salinity levels. Among the isolates, HK47, HM19, HTA1 and HT83 were the highest amylase, lipase, protease and cellulase producers respectively. Isolates HM27, HM82 and HTA2 had shown their polyenzyme activity. HT64 and HM88 were emerged as Halotolerant while HM89, HM90 and HM91 were possible Halophiles. As the bacteria isolated have the potential to produce valuable extremozymes and bioplastic, they can be used further as a key for major industrial applications.

INTRODUCTION: Earth had approximately 71% of the ocean coverage and remaining coverage goes to the land and other areas. Because of the higher coverage of the ocean, it also contains higher amount of diversity than the soil 1, 2. Mangrove ecosystem falls between ocean and land and hence had own unique diversity that had ability to produce novel products that are utilized by the other microbes and ecosystems 1, 3. Mangrove forests can tolerate salinity, anaerobic conditions, tides and high temperatures.

Under these extreme environmental conditions, different ecosystems are able to produce different kinds of active metabolites and enzymes with diverse biological functions 4-7. Microbes and their metabolites in this ecosystem play important role in host plant survival by promoting plant growth and productivity 8, 9. These novel products having potential applications in pharmaceuticals, feed and food, fine chemicals and enzyme industries 10.

The commercial value of these enzymes had increased dramatically in recent years in fields such as food industries, detergent industries, environ-mental remediation, medical applications, bio-sensors and so on 5, 11-16. The reason behind this is they are economical, environment-friendly, pose no ethical concerns and can be identified easily by the screening microorganisms 17. Being the largest ecosystem on the earth, the study of the enzymes from the organisms of marine ecosystem is still scarce than other ecosystems 11. The majority of the enzymes studied are those involved in the hydrolysis of the biopolymers. Enzymes isolated from the microbes of marine ecosystem e.g. halophiles, halotolerant, thermophiles, psychro-philic marine micro-organisms have been studied for their advanced applications in various industries and medical purposes 15, 18.

In this study, we report on a wide screening carried out on ninety-three isolates (obtained from several samples collected from various sites of Kutch, Gujarat) in order to study their potential to produce four enzyme activities and one secondary metabolite production.

Sample Collection Sites: Soil samples were collected from different places of the Gulf of Kutch in the season of winter. These sites were selected based on two factors: 1) High density of Avicennia marina 2) different pollution levels. The details of the sample sites are as below:

The samples were collected from depths of 10cm surrounding the rhizospheres and then stored in sterile plastic bags at 4 °C till analysis. For the isolation of bacteria from the adhering soil, the roots were dipped in sterile distilled water and made serial dilutions out of it. Soil samples were analyzed for pH, conductivity, macronutrients, and micronutrients at IFFCO (Indian Farmers Fertiliser Cooperative Limited), Kalol, District Gandhinagar, Gujarat.

Isolation of Microbes: All soil samples were enriched in nutrient broth with seawater and incubated at 30 °C, 120 rpm for 72 h. Then serial dilutions (10-1 to 10-4) of enriched samples were prepared and inoculated on a nutrient agar plate with seawater and incubated at 30 °C for 72 h. The morphological characteristics and Gram reaction of the isolates were also studied. The selected isolates were screened for their enzyme activity.

Isolated microbes were screened for their ability to grow at different salinity levels using different salt concentrations in nutrient agar, starting from 0.5% to up to 20% NaCl.

RESULTS AND DISCUSSION: For this study, the soil samples were collected from the sites which are nearby to the ports and had dense Mangrove cover. The results of the physico-chemical analysis of the soils are as below in Table 1.

A total number of isolates from different regions of Kutch were found, as mentioned in Table 2, 3, and 4. All the isolates were Gram-positive, which was confirmed by Gram’s staining. Enzyme activity on respective agar plates was recorded as the index of relative enzyme activity 24, 25.

The variations in different enzyme producers in the three samples can be seen in Fig. 1, 2 and 3. Some of the isolates had also shown PHB production Fig. 4. 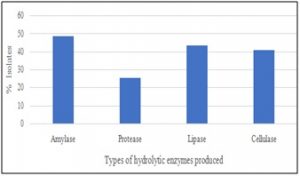 FIG. 1: ENZYMATIC PROFILE OF THE BACTERIA ISOLATED FROM MUNDRA SITE 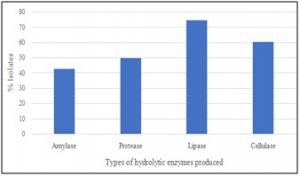 FIG. 2: ENZYMATIC PROFILE OF THE BACTERIA ISOLATED FROM KANDLA SITE 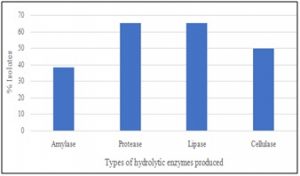 FIG. 3: ENZYMATIC PROFILE OF THE BACTERIA ISOLATED FROM TUNA SITE 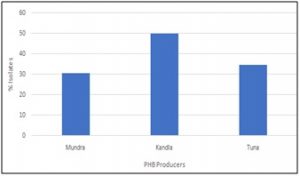 From the Kutch district, soil samples were collected from three different regions i.e., Kandla, Mundra, and Tuna. The results of soil analysis, along with salinity and surrounding vegetation, are represented in Table 1. A total of 93 bacteria were isolated, among which from Kandla 28 bacteria were isolated and from Mundra and Tuna 39 and 26 bacteria were isolated, respectively. Enzyme activity on respective agar plates was recorded as the Index of Relative Enzyme Activity. The formula for the calculation of the same is Relative Enzyme Activity = clear zone diameter/colony diameter. Table 2, 3 and 4 displays the production of extracellular enzyme activity by each isolate.

For the production of Polyhydroxybutyrate (PHB), Kandla has the highest positives, followed by Tuna and Mundra Fig. 4. Among all isolates, 3 isolates named HM27, HM82 and HTA2 were able to give all the enzyme activity as well as PHB positive Table 2, 3, 4 and Fig. 5.

TABLE 2: RESULTS OF ENZYME ACTIVITY AND PHB PRODUCTION OF BACTERIA ISOLATED FROM MUNDRA

TABLE 3: RESULTS OF ENZYME ACTIVITY AND PHB PRODUCTION OF BACTERIA ISOLATED FROM KANDLA

TABLE 4: RESULTS OF ENZYME ACTIVITY AND PHB PRODUCTION OF BACTERIA ISOLATED FROM MUNDRA

TABLE 5: SALT TOLERANCE ABILITY OF THE ISOLATED BACTERIA FROM KANDLA, MUNDRA AND TUNA 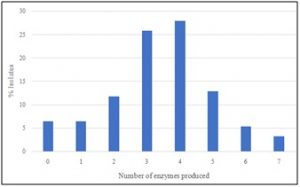 ACKNOWLEDGEMENT: The authors are thankful to the Management of Kadi Sarva Vishwavidyalaya (KSV), Gandhinagar, where this research has been carried out.