Primary spinal cord presentation of Primitive neuroectodermal tumors (PNET) is a rare occurrence and carries poor prognosis. A 13-year-old boy presented with pain in neck region, bilateral upper and lower limb weakness and bladder and bowel dysfunction. Neurological examination revealed the marked paresis with hyporeflexia of both the upper and lower extremities. Preoperative MRI of spine revealed an intradural mass at the C2-C5 level. A laminectomy of C2-C5 vertebra level and near total removal of the tumor was performed. Pathological findings were consistent with PNET.  Chemotherapy along with radiotherapy was started and good response was observed. The clinical, histopathologic, and radiologic findings of the patient are presented.

INTRODUCTION: Primitive neuroectodermal tumors are highly malignant and mainly exist in the central nervous system, chest wall, lower extremities, trunk, kidney and orbit but rarely spinal 1. Cases of PNET have been increasingly reported in recent years but there is scarcity of reports of PNET originating primarily from the spinal cord. To the best of our knowledge only 45 cases of whole spine and eight cases of cervical spine have been reported in the literature till date 2.  Though total excision combined with radiation therapy and chemotherapy are established as the standard therapy for primary spinal primitive neuroectodermal tumor (PSPNET), little is known about the optimal treatment strategy and therapeutic results.

Case: A 13-year-old boy presented with neck pain, quadriparesis, hypotonia in all limbs, and bladder and bowel dysfunction. He had a two-month history of neck pain radiating to the both shoulders, which progressed to quadriparesis along with bladder and bowel dysfunction over a period of one month. There was no history of trauma, fever, antecedent infection or contact with tuberculosis. On physical examination, the patient was alert and oriented with stable vital signs. There was no deformity on back and no tenderness on palpation. Motor strength of the all four extremity was decreased to 2-3/5.

There was brisk reflex of bilateral knee and ankle joints.  X-ray films of cervical spine and chest were essentially unremarkable. Spine MRI showed an intradural mass at the C2-C5 level (fig. 1). 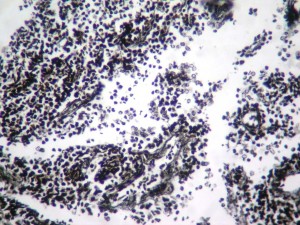 The lesion was hypointense on T1W image and heterogeneously hyperintense on T2W image. No extension of the lesion in the surrounding soft tissues was seen. Computed tomogram of chest and brain were normal. A laminectomy of C2-C5 and near total removal of the tumor was performed. On immuno-histochemical stain the tumor cells were negative for LCA, CD20, chromogranin and strong positivity for synaptophysin, neuron specific enolase and microneme protein 2 (MIC-2) antigen (fig. 2) was observed, suggestive of PNET. 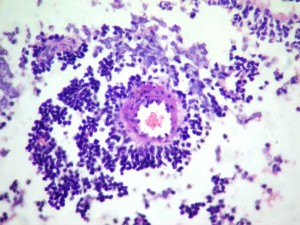 Bone marrow biopsy was normal. Chemotherapy along with radiotherapy was started and good response was observed. He is now able to walk without support. He has completed chemotherapy and under regular follow up for 31 months.

DISCUSSION: PNET was first introduced by Hart and Earle 3 in 1973 to describe a diverse group of malignant primitive and/or undifferentiated tumors occurring in children and young adults, which tend to have a relatively poor prognosis. In the recently updated World Health Organization classification, PNET is defined as an embryonal tumor composed of undifferentiated or poorly differentiated neuroepithelial cells which have the capacity for or display divergent differentiation along neuronal astrocytic, ependymal, muscular or melanotic lines 4.

In the revised 2007 WHO classification PSPNET was included the brain stem and spinal cord PNETs5. The most frequent sites of PNET are the intracranial, chest wall, lower extremities, trunk, kidney and orbits. Intraspinal PNET is extremely rare and the commonest location is the cauda equine region.

Recently in 2006 Kampman et al., had reviewed the clinical characters and genetics of 28 cases of intraspinal PNET reported in the literature 6 since then 17 additional cases of intraspinal PNET have been reported. Cervical intraspinal PNET found in only seven cases out of these 46 cases. Kampman et al., 6 had recently summarized the distinguishing features between cPNET and pPNET. Only 12 cases of pPNET with positive immuno-staining for CD99 (mic2) have been reported and half of them were in the lumbar region. This might be due to the fact that the cauda equina forms part of the peripheral nervous system. The characteristics diagnostic features of PNET by histopathology and immuno-histochemistry include: 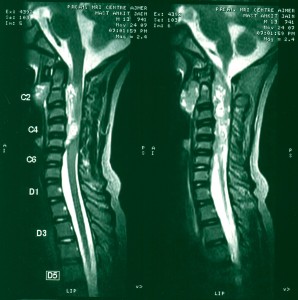 Recent studies suggest that the expression of MIC2 glycoprotein by immuno-cytochemical staining (CD99) can help to differentiate between central and peripheral PNET 6 (figure 3). Both pPNETs and ES strongly express the (MIC2) gene but differential diagnosis of pPNETs and ES based on the recognition of neural differentiation characterized histologically by the presence of Homer-Wright rosettes and/or immuno-histochemically 7-9. The imaging presentation of spinal cord PNET does not seem to be distinct from that of spinal cord astrocytoma or ependymoma.

A diagnosis of spinal cord PNET should be established on histopathological examination and confirmed by immuno-histochemical analysis, as in this case. After establishing a diagnosis of spinal cord PNET, it is imperative to rule out the possibility of the lesion being metastatic in origin as well as the possibility of its having metastasized from a primary PNET elsewhere. Magnetic resonance imaging or CT scan of the whole brain and spine should be performed to exclude leptomeningeal or drop metastases. The management of spinal cord PNET is a particularly challenging clinical issue. Complete excision is usually not possible, as the tumor infiltrates the spinal cord and/or nerve roots. Cranio-spinal radiotherapy should therefore be employed with the addition of a radiation boost to the primary tumor. The role of chemotherapy is unclear, and its use in cases of spinal cord PNET has been inconsistent 10, 11.

However, extrapolating from the experience with patients suffering from medulloblastomas or supratentorial PNETs, chemotherapy should be strongly considered for patients with spinal cord PNETs who have gross residual disease or microscopic or macroscopic metastases. Intense physiotherapy and rehabilitation must also be part of the comprehensive management to facilitate neurological recovery. In our case postoperative local spinal radiotherapy was given. The doses of radiation were 50.4 Gys in 28 fractions over 5.5 weeks. We used VAC/IE chemotherapy schedule. Our patient is asymptomatic clinically and radiologically for 31 months.

CONCLUSION: Our experience with this case emphasizes that primary spinal PNET with early diagnosis, surgical removal and radiation along with chemotherapy offers hope of long term and good quality survival.