ABSTRACT: In recent years, scientific research has confirmed the presence of large amounts of probiotic Lactobacillus sp. in fermented dairy products, which shows a positive impact on human health. This study was designed to isolate Lactobacillus with probiotic potential from local and commercial samples. 40 Lactobacilli strained were isolated from commercial and local yogurt samples by tenfold dilution plating method and plated on Man-Rogosa-Sharp agar medium and were screened for their use as potential probiotics. The isolates were tested for their ability to survive at pH 2.0, pH 3.0, in the presence of 0.3% bile salt and antimicrobial activity; sensitivity against 10 specific antibiotics (ciprofloxacin, erythromycin, tetracycline, penicillin G, ampicillin, streptomycin, polymyxin B, vancomycin, chloramphenicol and rifampicin) using filter paper disc diffusion method and two-fold serial dilution methods. Out of the 40 strains, 24 strains (42%) had survival rates above 90% after 2 h of incubation at pH values of 2.0 or 3.0 pH. Further screening performed on the above 40 isolates indicated that 24 strains show to 0.3% bile salt. Lactobacilli strains exhibited inhibitory activity against Salmonella strains and Candida albicans. Moreover, all of the strains were resistant to vancomycin and streptomycin. The 24 strains that were found suitable for Potential probiotic activity including strains Lactobacillus casei (95%), Lactobacillus salivarius (25%), Lactobacillus plantarum (75%), and Lactobacillus buchneri (72%).

INTRODUCTION: From the group of lactic acid-producing bacteria also known as LAB, are among the largest group whose members are found in intestinal tract of vertebrates, including humans, that are involved inz process of fermentation of different food products, resulting in improving the quality of food and safety, including the health status and comfortableness of the consumers.

These characteristic in a microorganism make them safe for use as food and as medication in the form of probiotics 1. The other probiotic strains also include Pediococcus, Bifidobacterium, Lactobacillus and Enterococcus 2.

Different elements should be considered while screening the potential probiotic lactic acid bacterial strains in chilled samples which has to be used for consumption. The more advanced studies show that when probiotics are to be used for gut health, the bacterial strains shall survive the passage through the gastrointestinal tract 5, 6. Taking probiotic as food or with food are good way to get its benefits and yogurt and ice cream are commonly consumed by human which are easy transporting vehicles for these beneficial lactic acid bacteria 7.

Sampling: Forty samples of yogurt were collected of different commercial brands. Isolation was based on methods Ananthanarayan, R 8. Lactobacillus sp were isolated on Man-Rogosa-Sharp (MRS) agar medium and stored at 37 ºC for 24 to 48 h for further phenotypic and genotypic identification 9.

Phenotypic and Genotypic Identification of Stains: Forty strains were isolated from the from commercial and yogurt samples by tenfold dilution plating method and plated on MRS Medium. All the isolates were first identified using conventional method of Gram staining, catalase activity and gas production in presence of glucose followed by carbohydrate fermentation. 16Sr RNA gene sequence analysis technique was used to identify the species. For this process genomic DNA was isolated using Genomic DNA isolation kit (HiPurA™, HiMedia). The amplification of 16SrRNA was done using thermal cycler and using prokaryotic 16S ribosomal DNA universal primer pair BSF8/27 (5′-AGAGTTTGATCCTGGCTC AG-3′) and BSR1492/20 (5′-GGTTACCTTGTTA CGACTT-3′) 10, 11. All the sequences obtained are then compared using BLAST to the Gene Bank database. Resulting in the identification of 31 Lactobacillus isolates.

Acid Tolerance: Acid tolerance test was done as per the method given by Chung et al., 9 with little changes. In in this method, 10 μL of overnight stored bacterial samples in MRS broth were inoculated into 1 mL of broth of MRS with pH 2.0, and pH 3.0, and pH 6.4 as control.

Study of Culture Characters: The enumeration of culture characters and morphology was carried out according to the method described by Banson, H.J 10.

Proteolytic Activity: To study proteolytic activity of lactic acid bacteria, MRS agar with additional 10% skimmed milk was introduced, left for solidification and then dry. Whatman paper discs sterilized and kept on the surface of MRS agar. 20μl young culture were given to each paper disk. Incubated at 37 ºC for 24 hour, after which proteolytic activity was measured as diameter of clear zones around the discs 11.

Lipolytic Activity: To measure Lipolytic activity, all strains were introduced on agar having spot in Tween 80 with different concentrations as 1%, 3% and 5% 12. Incubated for 72 h at 25 ºC. The strains which showed an opaque area around the spot because of esters formation with calcium which produce fatty acids are recorded as positive13. Diameter of lytic zone were measured to study the lipolytic activity.

Cell Surface Hydrophobicity: To study the bacterial adherence with hydrocarbons was done as per Mishra and Prasad. Lactobacillus sp. were harvested after incubation for 18 h at 37 °C precede by centrifuging the sample at 5000 rpm for 15 min. The cells collected were then washed two times with Phosphate Urea Magnesium Sulphate (PUM) buffer and then kept on an individual basis in PUM buffer at 108 cfu/ml level. The spectrophotometer reading of the suspension were recorded at 600 nm (A). From each cell suspension an amount of 5 ml was blended in 1 ml of hydrocarbon including ethyl acetate, xylene, toluene and chloroform. The mixture obtained was then vortexed for 1 min and the phases were separate after one hours at 37 °C. The aqueous stage was cautiously separated using a sterilized Pasteur pipette and the absorbency (A0) was read at 600 nm to compute cell surface hydrophobicity 14.

Procedure: LS broth was prepared with 0.4%, 0.6%, 0.8% and 1% sodium taurochlate and dispended to test tubes in appropriate proportion. The tubes were inoculated by loop inoculation process and then incubated at 37 ºC for 24 h along with a control. The results were analyzed after 24 hours of incubation spectrophotometrically at 600nm.

Test for Anti-microbial Activity: Probiotic strains have been demonstrated to inhibit the growth of many enteric pathogens. There are several metabolic compounds produced by probiotic bacteria such as organic acids, fatty acids, hydrogen peroxide, diacetyl, bacteriocin and proteinaceous substances, which have antimicrobial effect.

Procedure: Soft nutrient agar was prepared with 6g/L of agar (pH-7.2), the agar medium was cooled to 45 ºC. The medium was then poured into four sets of sterile petri plates aseptically and allowed to set. After cooling, 100µL of inoculums of three different pathogenic strains were pipetted out separately with the help of micropipettes are poured aseptically to the center of the agar plates of each set. With the help of sterile paper discs (about 8mm thick) were placed aseptically on the center of the inoculation plates. These paper discs were then inoculation at 37 ºC for 24 h. After 24 h of inoculation the plates were observed for zone of inhibition. The four pathogenic strains were Salmonella typhi. E. coli, Staphylococcus aureus and Candida albicans and the test isolate were lactobacillus species.

Antibiotic Susceptibility Test: To test the sensitivity of bacteria to different antibiotics disk diffusion method 14 was performed using dodeca discs (Hi Media, India) of different antibiotics like Ciprofloxian, Erythromycin, Tetracycline, Peni-cillin, Ampicillin, Streptomycin, Vancomycin, Azithromycin, Chloramphenicol, Gentamycin, Neomycin and Oxacillin. The active cultures were poured into the plate with a base layer on Muller Hinton agar plates. The inhibition zone diameters were recorded after 24 h of incubation at 37 °C.

Statistical Analysis: Statistical analyses were done using SPSS 14.0 software (SPSS Inc.; Chicago, IL, USA). Significant differences among treatments were tested by ANOVA developed by Ronald Fisher in 1923 with a level of significance at α = 0.05. Data were expressed as Mean Values ± Standard Deviation (SD). All experiments were performed in duplicate and repeated three times.

Result of Agitation: The growth in the incubator shaker was less than compared to the ordinary incubator; thus, it confirms that the isolates are all facultative anaerobes. The spectrophotometric analysis was shown in graphical representation Table 1. 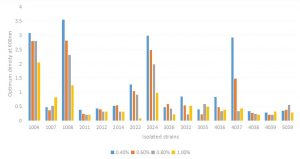 Antibiotic Susceptibility Test: To study the resistance of different 20 lactobacilli strains against 12 different antibiotics susceptibility test was carried out and the result are shown in Table 3.

The bacterial species isolated from curd samples were subjected to general bacteriological isolation techniques. Among the biochemical test, the important results showed by the isolates were catalase-negative, lactic acid production from glucose, and heavy growth on Tomato juice agar. All the isolates give pigmentation, which ranges from orange to brown color. These results have brought the isolates under Lactobacillus genus. 16Sr RNA gene sequence analysis technique was used to identify the species. The growth of isolates on MRS agar plates at pH 6.5 also confirms the lactobacillus sp. 16. For probiotic bacteria to work efficiently, it must have the capacity to survive in the gastrointestinal tract. In many studies, the acid resistance for Lactobacillus at pH 2.0 and 3.0 was studied with MRS broth. In a study on ewe’s milk, the strains showed favorable resistance at pH 2.0 of 72% from 50 lactobacillus strains 17.

In the present study, more than 40% strains showed the survival rate of at pH 3.0, whereas 37.5% of the strains showed the survival rate at pH 2.0 Table 1. In the human gut, NaCl is an inhibitory substance that can inhibit the growth of the microbe so, the isolates were grown in a medium with NaCl concentration ranging between 0.4-1% bile concentration, and it was found that all 24 strains were able to survive at 0.5% bile salt, but only 6 were found to be tolerant to all concentrations between 0.4-1% whereas the rest were found to be weakly tolerant Fig. 1. All the bacterial strains to be used for probiotics must not have any antibiotic-resistant gene present 18; for this reason, all the strains were assessed for antibiotic resistance test. The result, as shown in Table 4, all the strains were found susceptible to all antibiotics tested except oxacillin and ampicillin, which shows the strains are safe to be used for probiotic potential. The most important use of probiotic bacteria is to protect the organism from pathogenic bacteria within the intestinal eco-system 19.

In the present study, all 24 strains showed different levels of inhibition against E. coli, Staphylococcus aureus, Salmonella typhi, and Candida albicans. A similar result was reported in many studies against gram-positive and gram-negative bacteria 20. In comparison to a study by Osuntoki et al., 21 where the Lactobacillus spp. showed antimicrobial activity only against some clinically important pathogens like E. coli (4.2 mm), Salmonella typhi (4.3 mm), and Listeria monocytogenes (5.0 mm).

CONCLUSION: In conclusion, out of 40 strains, 24 strains were selected as appropriate probiotic potential strains which can be used for promoting hosts intestinal health and to maintain healthy natural micro-flora during antibiotic treatment. Also need for in vivo study is there to verify the effectiveness of selected strains.

ACKNOWLEDGEMENT: The author would like to thank the Deanship of Scientific Research at Majmaah University for supporting this work under Project Number No. 64/51942.