ABSTRACT: The critical nature of pharmaceutical dosage forms requires that both formulation and process variables are optimized in order to achieve desired quality outcome. In this study, process optimization is examined with a view to position the final product in such a way as to deliver the expected performance. Six formulations were designed with similar excipients and nifedipine as model drug. Each formulation went through wet granulation process, during which the granulation time, amount of granulation liquid and wet milling using different sieve sizes were modified to reflect the parameters being investigated. Results vindicated the importance of modification of process variables to the extent that significant difference was observed in the physicochemical parameters, especially in vitro dissolution and drug release rates. Data from in vitro dissolution testing was fitted into different kinetic models so as to predict the order and mechanism of drug release. It could be concluded from this research work that through logical process optimization, it is possible to identify critical process parameters that can be modified to enable designing and building of desired qualities into the final product.

INTRODUCTION:There is no doubt that wet granulation process is not new in pharmaceutical manufacturing, what may probably be doubtful is the extent to which process and its independent variable parameters have been optimized. Effective dosage forms delivery is contingent upon adequate process optimization among other factors. Every process parameter must be shown to perform optimally at specified conditions and this must reflect in the quality attributes of final output as espoused by dependent response variables.

The history of controlled release dosage systems dated back to early 1970s when it was introduced into the medical community to address the problems of temporal delivery and spatial placement of drugs 1. The available immediate release (IR) drug products have limitations and were unable to provide this type of delivery.

Despite the facts that drug formulation scientists and clinicians agreed that controlled release dosage systems address the needs for proven system that delivers correct dose of drug over a prolong period of time to a particular part of the body, (i.e. temporal delivery and spatial placement), thereby improving quality of life 2, 3; controlled release system is not without its own problems. Such shortcomings as dose dumping and dose drought have been reported with attendant clinical consequences 1.

In literature, the combined effects of granulation time, amount of granulation liquid and milling with various sieve sizes have been reported to yield granules of varying appearances, sizes and shapes; flowability, dustiness and segregation during mixing; die filling, densities and other compression characteristics 4-10.

In the same vein, these 3 parameters were also implicated in varying disintegration and dissolution; absorption and release rates; taste and colour; tablet weight, hardness and stability that were observed in tablets 11-14.

In this study, the impact of modification of process variables on dose irregularities in oral controlled release tablets was investigated. The objectives among others include evaluation of influence of modification of independent parameters such as amount of granulation liquid, granulation time and wet milling using various sieve sizes, on the performance of different formulations coded F-1 to F-6. Examination of role being played by wet granulation process in perpetration of problems of dose dumping and dose drought, identification of reliable and usable method of process optimization as well as proffering solutions to events of dose irregularities using the outcome of the study, are other reasons.

MATERIALS AND METHODS:  During experimentation, the controlled release status of the adopted formulation was established by adding different amount of polysorbate 80 (GATCO, Germany), 0.5%, 1.25% and 2% to 3 identical formulations which has nifedipine (Gemini Pharma Ltd, Nigeria) as model drug. Polysorbate 80 is a surfactant that solubilizes and thus causing the release of nifedipine from the tablet matrix.

At 1.25% inclusion of polysorbate 80, the formulation was confirmed to comply with official requirements as adapted from BP and USP for dissolution of controlled release dosage form. This composition (maize starch, lactose, nifedipine, microcrystalline cellulose and polysorbate 80) as previously reported 14, 15; was adopted in all the 6 different formulations and the process variables were modified to reflect the parameters that were being investigated as shown in Table 1.

Thus minimum and maximum amount of granulation water was determined to vary from 600ml to 750ml and represented 40% to 50% of total weight of the batch size. Below 600ml, the granules were not wet enough to remain strong after drying and could not be used for tablet compression. Above 800ml, too wet granules that could not pass through required sieve size were produced and could not be processed further.

Similarly, at granulation time of 6 to 8 min, usable granules that were compressed into usable tablets were produced while other parameters were kept constant as shown in Table 1. Below and above this time range, good granules could not be produced. Resultant granules were compressed into tablets which were thoroughly evaluated and compared with REF-P using dependent response variables especially in vitro dissolution and in vitro drug release.

Computation of correlation coefficient (R2) from all the models and release exponent (n) from Korsmeyer-Peppas was done and results used to predict order and mechanism of drug dissolution as indicated in Table 2. The model that best fit the dissolution data is selected on the basis of highest value of R2 as applied by previous researchers 16, 17.

RESULTS AND DISCUSSION: Preliminary characterization of resultant tablets using physical tests such as weight uniformity and tablets thickness; physicomechanical tests e.g. hardness, friability and disintegration; physicochemical tests such as dissolution and assay, enabled profiles of dissolution, drug release as well as drug release rate to be estimated and constructed respectively as shown in Figures 1 and 2. 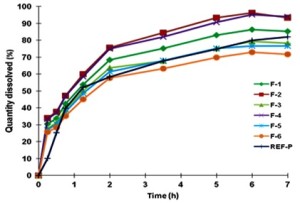 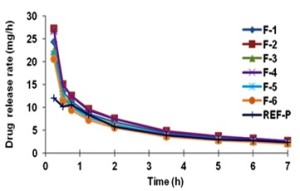 The dissolution testing of the tablets was done over a period of 7 hours and results were found to be higher in 3 (F-1, F-2, F-4) and lower in the rest 3 formulations (F-3, F-5 and F-6) in relation to REF-P as indicated in Fig. 1. Profiles of drug release rates showed similar trends as in dissolution as depicted in Fig. 2.

Given the values of R2, it could be seen that formulations F-1 to F-6 including REF-P best fitted into Higuchi model. The value ranges from 0.9661 to 0.9695 in respect of all the formulations. The values of (n) are also indicators of the fact that the mechanism of dissolution is possibly by erosion of polymers in the tablets matrix. This result is in line with result previously observed by other researcher where the value of (n) is reported to be higher than 0.89 18.

CONCLUSION: This research work has highlighted the importance of processing and the potentials inherent in process parameters that could be deployed to resolve physicochemical issues that may arise during drug development. Indeed, the results offered formulation scientists a cheaper option that incurs no additional cost that may arise if a material is to be replaced because of the need to improve on response parameters such as disintegration, dissolution and drug release.

The effects of modification of each of the 3 process variables provided insights into how each could be employed to achieve stepwise increase in dissolution which is pivotal to resolution of both dose dumping and dose drought. It could also be concluded from this work that the 6 formulations best fitted into Higuchi model with erosion as mechanism of drug dissolution.

ACKNOWLEDGEMENTS: The author acknowledges contributions of Prof. C.I. Igwilo and Dr. B.O. Silva under whose supervision this research work was carried out.

CONFLICT OF INTERESTS: The author reports no conflict and no declaration of interests.