ABSTRACT: Biopolymers are gaining more importance in our day-to-day life, due to the hazardous effect of synthetic plastics in our environment. Curdlan is one of the biopolymers, which has a broad field of applications in the food, pharmaceutical and medical industries. It is a polymer of glucose, produced by the family members of Rhizobiaceae. Curdlan [(1→3)-β-D-glucan] production takes place under the nitrogen starvation period during the cell growth. Fifty Agrobacterium sp. were isolated from root nodules collected from different localities of Coimbatore and Palakkad and screened by Aniline Blue method for the production of curdlan. The species was confirmed as Agro-bacterium fabrum by 16S rRNA sequencing. The accession number given by GenBank is MF521602. Curdlan was produced using different carbon and nitrogen sources. The extraction was done by Sodium hydroxide: Acetic acid precipitation. 0.12 gm of crude curdlan was obtained from 1.2 gm/100 ml of biomass. The product was stored for further research.

Xanthan, gellan, and curdlan are the three exopolysaccharides, which has been approved as food additives by the food and drug administration 2. Curdlan clumps as a strong gel totally in the thermal suspension and never return to aqueous state again 3. Structural analysis of curdlan is given as β-(1→3) linkage with a homopolymer of D-glucan 4. The degree of polymerization (DP) of unbranched curdlan was roughly measured as 450 5. It has a major impact on the clinical level, as it can elicit the immune response against many pathogenic microbes and drastic disorders like cancer 6.

Large-scale production of exopolysaccharide curdlan is performed mainly by Agrobacterium sp. ATCC 31749 7. Curdlan biosynthesis requires the participation of four major genes crdA, crdS, crdC and crdR 8. NtrB and NtrC molecules give a hand for the synthesis of curdlan under nitrogen retardation period 9.

Sample Collection: Root nodules of leguminous plants such as ground nut and pea plants were collected from the different locality of Coimbatore and Palakkad carefully without disturbing the nodules in Ziplock bags and brought to laboratory for further research.

Isolation of Agrobacterium sp. and Screening for the Curdlan Production: Root nodules were washed under running tap water to remove the excess soil, and surface sterilized with 1% mercuric chloride solution 10. Sterilized nodules were carefully handled with sterile forceps and pressed under the two sterilized glass slide to extract the fluid inside the nodules. The extract was streaked on the sterile yeast extract mannitol agar plates, with sterilized loops 11. Isolated organisms were inoculated into a yeast extract mannitol agar containing Aniline Blue reagent 12.

Seed Culture Preparation, Production and Extraction of Curdlan: The inoculums for the production of curdlan was prepared by inoculating the isolates in the seed culture media containing peptone 0.5 g, yeast extract 0.5g and 1% of sucrose as a carbon source. The medium was kept for incubation at room temperature for 24 - 48 h. The seed culture inoculums were inoculated in the Minimal salt medium containing KH2P04, 3.0; Na2HP04, 6.0; MgS04, 0.5; (NH4)2HP04; 0.1, trace element solution- 10 ml (5g FeS04.7H20, 1g CoCl2.6H20, 2g MnS04, citrate, 1g ZnCl2 per litre of 0.1mol l-1 HCl) and 2% Sucrose as carbon source. Medium adjusted to pH 5.5 16. The inoculated flasks were kept for shaking incubation at room temperature for 76 h at 180 rpm. The extraction of curdlan was done by centrifuging the culture medium at 12,000 × g for 30 min 17, 18. The extracted pellet was mixed with the same ratio of 0.5N Sodium hydroxide at 4 ºC. The solution was kept undisturbed for 3 h at the same temperature. After that the content was again centrifuged at 12,000 × g for 40 min and the supernatant obtained after centrifugation contains the curdlan. This was precipitated by adding 10% acetic acid and was twice washed with water, acetone, and ether.

The organism which gave higher production of curdlan was confirmed by 16S rRNA sequencing technique done in Yaazh Xenomics lab at Coimbatore.

Collection and Isolation of Agrobacterium sp.: Root nodules were collected from the regions of Coimbatore and Palakkad Fig. 1. Fifty Agrobacterium samples were isolated from the root nodules collected from different regions of Coimbatore and Palakkad. Red colored mucoid colonies were obtained on yeast extract mannitol agar plates Fig. 2.

Seed Culture Preparation, Production and Extraction of Curdlan: The 5 isolates showed high cell growth in the seed culture medium. A high dense growth of organism was observed in the production medium, pH 5.5 was reported as the optimal for curdlan production. From among the 5 isolates, the one which gave better production was selected for further studies Table 1. The organism was found to be Agrobacterium fabrum (A43) by 16S rRNA sequencing. The accession number given by GenBank is MF521602.

This isolate was inoculated in the MSM medium with 2% Sucrose and production was carried out. It was found to produce 0.12 gm/ 100 ml of the medium. Crude curdlan was extracted by the centrifugation method, given by Lee et al., 1999 for the extraction of curdlan 19.

TABLE 1: RESULTS OF CURDLAN PRODUCING AGROBACTERIUM FROM THE DIFFERENT REGIONS OF COIMBATORE AND PALAKKAD

The report was compared with the β-configuration of the natural gum obtained from the strains of Rhizobium radiobacter ATCC 6466 21 and Agrobacteruim sp. ATCC 31750 22. 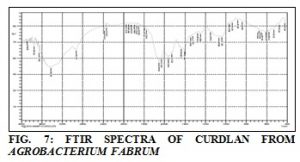 CONCLUSION: The current research focused on the isolation of fifty Agrobacterium sp. from root nodules of leguminous plants from different regions of Coimbatore and Palakkad.

Among them, the A43 was selected and identified as Agrobacterium fabrum and characterized for the production of Curdlan under the optimum condition. About 0.12 g of curdlan was produced from 1.2 g/100 ml cell weight. This compound was stored for further studies on cancer.