PRODUCTION OF BIODIESEL FROM AGRO-INDUSTRIAL WASTE

PRODUCTION OF BIODIESEL FROM AGRO-INDUSTRIAL WASTE

ABSTRACT: Fossil fuels are significantly depleted nowadays due to excess utilization. Therefore, it is always better to find alternatives to produce eco-friendly fuels. This paper deals with the production of biodiesel from agro-industrial waste such as young coconut husk, custard apple seeds and broiler chicken skin. Lipids were isolated from the substrates using the modified Bligh and Dyer method and transesterification was conducted to the isolated lipids in an inert condition to produce biodiesel. Obtained biodiesel was characterized by Gas Chromatography-Mass Spectroscopy (GC-MS) and confirmation of esters was done using Fourier Transform Infrared (FTIR). This study encourages the production of biodiesel from waste plant and animal sources.

INTRODUCTION: The most fundamental requirement for human beings is energy. It is one of the major factors for socio-economic development. Fossil fuel usage increasing day by day to meet the demands of an increasing population. Excess consumption of these fuels drastically changes the ecosystem balance by increasing greenhouse gases. To balance all these issues researchers focusing on the production of eco-friendly biofuels such as biodiesel, from agro-industrial residues. Biodiesels produced from different sources like vegetable oils and animal fats 1-5. The current research was carried out to produce biodiesel from agro-industrial waste materials such as young coconut husk, custard apple seeds and broiler chicken skin. The botanical name of coconut in Cocus nucifera. It belongs to the family Aceraceae 6.

Coconut is an unbranched and monoecious tree. The coconut fruit is botanically known to be a drupe. Coconut has 3 layers called the exocarp (outer layer), mesocarp (middle layer) and the endocarp (inner layer). The exocarp and mesocarp together forms the ‘husk’ of the coconut 7. The botanical name of Custard apple is Annona squamosa and it belongs to the family Annonaceae. It is also known as sugar apple. The seeds of Annona squamosa contains a good source of oil of almost 26.8% 8.

The botanical name of broiler chicken is Gallusgallus domesticus. Chickens that are breed and that are specifically raised for meat production are called as a broiler 9. Broilers generally have yellow skin and white feathers 10, 11. The products or waste produced from food processing methods and other agricultural products are generally considered to be a problem as a pollutant. After processing, a large amount of plant material and animal waste often remains without any application. When such materials are converted into valuable resources, it contributes to reduction of residues 12.

Lipids of biological materials, plant waste etc. can be extracted and purified in a single-step operation. This requires a mixture of chloroform and methanol that had wide use as lipid extractants. Common methods employed to reduce the viscosity of vegetable oils and other oils include blending with diesel, micro-emulsions, thermal cracking, and transesterification 13. The transesterification process is generally a sequence of reversible reactions, where there is a conversion of triglycerides to diglycerides and then to monoglycerides. The glycerides formed were then converted into glycerol and one ester molecule at every step 14 Fig. 1.

R1, R2, R3 are long-chain hydrocarbons and are generally called fatty acid chains. It involves the conversion of triglyceride to diglyceride and then to monoglyceride, and finally to glycerol. Therefore, 1 mol of a fatty ester is liberated at each step. Methanol is usually used as the alcohol because it has a low cost of 15. The transesterification usually requires about 1 h with the temperature of 60-65 °C (for methanol) 13.16.

Collection of Raw Materials: Commercially available tender coconut husk, custard apple seeds, and broiler chicken skin were collected from vendors in and around the area of Krishna Raja Puram, Bengaluru, India. The sample was collected in sterile plastic bags and it was brought to the laboratory for additional processing 17. Coconut husk was separated from the shell and was kept in a sterile container for further usage 18. Custard apples collected from fruit sellers were stored in airtight containers for further studies.

Extraction of Lipids: The Bligh and Dyer method was used to isolate lipids from the substrates. 2:1 ratio of chloroform and methanol was added. This was placed in a water bath for 15 min at 55 °C. The homogenate was filtered and the cell debris was removed by using Whatman filter paper no. 1 22. For washing the crude extract, to the filtrate, 20ml of 50 mM NaCl was added instead of water 23. After the addition of NaCl, it is allowed to separate further. This was transferred to a 500 ml measuring cylinder for complete and accurate separation. The methanolic layer is removed along with a small volume of chloroform layer to make sure complete removal of the alcoholic layer. The chloroform layer thus contains the purified lipids 22. The oils were then recovered from the chloroform layer completely using the rotary evaporator at 40 °C 25.

Transesterification: On a heating mantle, a two neck round bottom flask equipped with a reflex water-cooled condenser to reduce the evaporative loss of methanol was placed. The second neck is used for the addition of chemicals. For each transesterification run, lipids were added into the reactor and were heated at 60 °C before adding the catalyst and methanol 24. 100 ml of methanol and 10 g of sodium hydroxide was added to the oil. The reaction was maintained in an inert condition in the presence of nitrogen gas. This was carried out for 90 min 8. The mixture was transferred to a separating funnel to settle. Two layers will be formed where the upper layer is the biodiesel and the lower layer is glycerine. Biodiesel is thus separated from the glycerine layer 8. The upper layer is collected and is transferred to a funnel containing sodium sulphate to completely remove the presence of water. The filtrate was subjected to complete evaporation of the solvents by placing it in a rotary evaporator at 40 °C 25. The purified FAME was analyzed by Fourier Transform Infrared and Gas Chromatography-Mass Spectroscopy.

GC-MS Analysis: GC-MS analysis was performed using a NIST/EPA/NIH mass spectral library system, version 1.0, comprising of a Gas Chromatograph interfaced with a Mass Spectrometer (GC-MS) to determine the methyl esters present in the obtained biodiesel products. For GC-MS detection, an electron ionization system (EI) was operated in electron impact mode with ionization energy of 70 eV. As a charge carrier, Helium gas (99.999%) was used at a constant flow rate of 1.2 ml/min, and an injection volume of 2 μl was employed with a split ratio of 2:0. The injector temperature was maintained at 280 °C, the ion-source temperature was 200 °C, the oven temperature was programmed from 60 °C (isothermal for 2 min), with an increase of 10 °C/min to 200 °C. The constituents were recognized after comparison with those constituents available in the computer library (NIST) which is attached to the GC-MS instrument and the results obtained have been tabulated 26.

FTIR Analysis: The purified FAME were analyzed by Fourier Transform Infrared (FTIR). FTIR relies on the fact that most molecules absorb light in the infra-red region of the electromagnetic spectrum. This absorption corresponds to the bonds present in the molecule. The frequency range is measured as wave numbers typically over the range 4000-600 cm-1. The background emission spectrum of the IR source is first recorded, followed by the emission spectrum of the IR source with the sample in place. The ratio of the sample spectrum to the background spectrum is directly associated with the sample's absorption spectrum 27.

Determination of Moisture Content: SHIMADZU UniBloc Moisture Analyzer MOC63u was used to analyze the moisture content of the fuel 28.

The region 1742 confirms the presence of an ester. The compound that confirms an ester is an n-hexadecanoic acid with a retention time of 19.306. 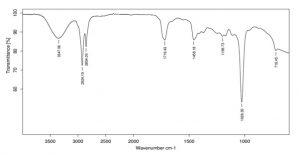 The region 1719 confirms the presence of an ester. The compound that confirms an ester is 9-Octadecenoic acid with a retention time 21.725. 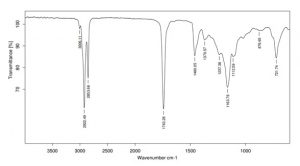 The region 1743.25 confirms the presence of an ester and thus biodiesel. The compound that confirms an ester is hexadecanoic acid with a retention time of 18.940.

CONCLUSION: One can understand that though the production of bioethanol is highly researched and even various evidence of its being commercialized is known, still many challenges lie ahead in making its sustainable source. It is understood that it’s always better to choose substrates that have a higher lipid content. This favors the transesterification reaction. In this work, the three substrates selected were young coconut husk, custard apple seeds, and chicken skin. Among the 3 substrates, it was clear that broiler chicken skin had more percentage yield when compared to young coconut husk and custard apple seeds. The waste produced from food processing methods and other agricultural products is generally considered to be a problem as a pollutant. After processing, a large amount of plant material often remains without any application.

When such materials are converted into valuable resources, it contributes to the reduction of residues. Utilization of agro-industrial waste, its low operating cost in biodiesel production makes this study a promising one for possible green technological applications. The rendered oils with high FFA could be converted to good quality biodiesel by two-step process viz. acid-catalyzed esterification of FFA followed by alkali catalyzed transesterification of triglycerides. The oil methyl ester from the substrates blended with diesel fuel could be used as an alternative fuel in conventional diesel engines without any major modifications.

ACKNOWLEDGEMENT: The authors would like to thank the VC, Pro VC, and CHRIST (Deemed to be University) management for supporting this work.