Categories Menu
Home » PRODUCTION OF BIOSURFACTANT FROM BACILLUS SP. AND ITS LARVICIDAL ACTIVITY

PRODUCTION OF BIOSURFACTANT FROM BACILLUS SP. AND ITS LARVICIDAL ACTIVITY

PRODUCTION OF BIOSURFACTANT FROM BACILLUS SP. AND ITS LARVICIDAL ACTIVITY

ABSTRACT: Mosquitoes are becoming a serious threat to the humans causing infectious diseases like dengue, malaria, chikungunya, yellow fever etc. They multiply in large numbers in a polluted environment and stagnant water bodies. The control measures include the use of pesticides and chemical compounds which further causes harmful effects. Thus, an alternative solution is to use a biologically active compound which has larvicidal property and is eco-friendly. Biosurfactants are such compounds. In this present study, 75 isolates obtained from petroleum contaminated soil samples were screened and one potent isolate was selected and identified. The biosurfactant was produced from Bacillus subtilis B50. The crude compound was characterized as lipopeptide. Its larvicidal activity was tested using the similar stage of mosquito larvae at different concentration of crude biosurfactant (1 - 10 mg %). The LC50 and LC100 were calculated after observing the larvae for 72 h. The obtained results showed that as the time and concentration increases the mortality also increases. The maximum number of larvae was killed at a concentration of 1 - 4 mg for 72 h. The observations suggest the application of biosurfactant as an eco-friendly product for the eradication of mosquitoes.

INTRODUCTION: Human diseases like dengue, malaria, chikungunya, yellow fever, West Nile fever, elephantiasis, encephalitis and other deadly diseases are spread by mosquitoes which act as vectors. Thus several measures are taken to control mosquito which includes the elimination of breeding places, bio-controls with parasites like nematodes and fungi 1 or predators such as fish and lizards 2.

Another way is the application of pesticides and broad-spectrum chemicals which are harmful to the environment as well as for living beings 3.

Temephos and Fenthion are the chemical agents which are most frequently used for inhibition of larval population 4. Diethylmetatoluamide (DEET), pyrethrum, methoprene, briquet, and malathion are the poisonous chemicals which are present in commercial mosquito repellent sprays and coils 5. The overuse of these chemicals causes several negative impacts such as the development of resistance to the mosquito, the effect on non-target insects and contamination of drinking water sources. The increasing number of resistant mosquitoes due to genetic variation results in the ineffectiveness of insecticides 6.

Wolbachia, bacteria which is pathogenic to insect was found to minimize the susceptibility of Aedes to dengue virus 8. The metabolites produced by Bacillus thurengiensis and serratia has been found to inhibit the larvae of Aedes, Culex and anopheles mosquitoes 9. Bacillus thurengiensis subsp. Israelensis and B. sphaericus produce various microbial pesticides which are administered as an alternative to mosquito control 10, 11.

However, some reports indicate the development of resistant mosquito species to B. sphaericus. Even though the development of resistance has not yet become a serious problem with B. thurengiensis, the insecticidal property, stability and the solubility of the toxin crystals produced by them are susceptible to change in the pH and excessive exposure to the sunlight 12, 13. To overcome such limitations, new bacterial agents are developed 14. One such compound is biosurfactant.

Biosurfactants, as the name suggests, are the surface active agents synthesized by living organisms. They have various properties such as surface tension reduction, emulsification, foaming activity and as basically non-toxic and eco-friendly 12. Most of the researchers are interested in the study of biosurfactants due to its unique properties which also includes selectivity, tolerance to extreme conditions, biodegradability, and possibility for a wide range of application in different fields 15.

In the present research work, one potent biosurfactant producing bacterial strain of Bacillus subtilis B50 was selected after the screening of 75 different isolates obtained from various petroleum contaminated soil samples and the larvicidal activity of BS was evaluated.

Isolation of Bacteria Producing Biosurfactant: The soil samples were enriched in mineral salt medium (MSM) which consists of 0.1% NH4NO3, 0.1% KH2PO4, 0.1% K2HPO4, 0.02% MgSO4, 0.02% CaCl2, 0.005% FeCl3.6H2O, 1% Dextrose 16. 2% of engine oil was used as carbon source to enhance the growth of biosurfactant producer. The sample was incubated at room temperature for 72 h. The organisms were isolated by serial dilution method and screened for the production.

Identification of isolate by 16S rRNA Sequencing: The selected isolate was identified by 16S rRNA sequencing. This was done at Yaazh Xenomix Laboratory, Coimbatore. The identified strain sequence was deposited in GenBank and accession number was given.

Biosurfactant Production and Extraction: The positive isolate was inoculated in the production medium (MSM) and incubated at 30°C for 48-96 h. The supernatant was collected following the incubation by centrifugation at 10,000 rpm at 4 °C for 30 min. The cell pellet was used for the determination of biomass. It was washed with petroleum ether and Acetone at the ratio of 1:3 and centrifuged at 3000 rpm for 20 min to remove the oil from the cell debris. This process was repeated thrice. Further, it was washed with distilled water and dried at 60 °C and weighed. 6 N HCl was used to adjust the pH of the supernatant to pH 2.0 and kept in the refrigerator for 24 h. The biosurfactant was extracted by mixing chilled Chloroform: Methanol (2:1) to the supernatant in equal volume. An organic layer form at the top which contains the biosurfactant was pooled and evaporated. The dry weight of the crude extract was recorded 22.

FTIR Analysis of Biosurfactant: FTIR spectroscopy (Shimadzu) was employed to explore the chemical bonds and functional groups present in the extracted biosurfactant. IR spectra of the sample were recorded over the range of 4000- 400 cm-1 spectral region.

Larvicidal Activity of Biosurfactant: The mosquito larvae were collected from waterlogged area and kept in an open earthen pot to attain a similar developmental stage of the larval lifecycle. Different concentrations (1 - 10 mg %) of the extracted biosurfactant was prepared in distilled water in test tubes. To them, an equal number of larvae at same stage were transferred and incubated for 24 - 72 h at room temperature. The number and the time taken for the larval death in each tube were noted. Distilled water was kept as control. The lethal concentrations LC50 and LC100 for the sample were calculated 23.

Isolation of Bacteria Producing Biosurfactant: In this study, petroleum contaminated soil samples were enriched in MSM medium containing 2% engine oil as a carbon source. From the samples, 75 different isolates were obtained and screened for biosurfactant producing properties Table 1. Among them, two cultures which showed positive results for all the screening tests were selected for a combination study Fig. 1, Table 2.

Many other reports describe the isolation and production of biosurfactant by Pseudomonas aeruginosa 24, Stenotrophomonas maltophilia 25, Bacillus licheniformis 26, Mycobacterium 27, Rhodococcus 28, 29.

Biosurfactant Production and Extraction: The chloroform: methanol extraction Fig. 3 gave the yield of about 0.689 gm / 100 ml of the production medium Fig.4. 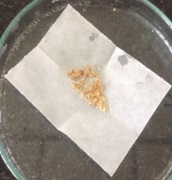 FTIR Analysis of Biosurfactant: The spectrum in the FTIR analysis infers the characteristics of lipopeptide Fig. 5. 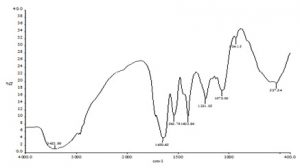 Larvicidal Activity of BS: The larvicidal activity at different concentrations from 1 mg % - 10 mg % is given in Table 3, Fig. 6. Following incubation with crude biosurfactant, mortality was observed at high concentration after exposure for 12 h. LC50 was recorded at 5 mg % and LC100 at 7 mg % on 24 h of exposure. A similar study was done by Das et al., 2005 in which larvicidal activity of lipopeptide secreted by B. subtilis was determined 3. LC100 was recorded for 1 - 2 mg % for 72 h exposure. This present work shows that the maximum larval death is observed at low concentrations when exposed to the biosurfactant for a longer period of incubation i.e. 48 - 72 h. Thus it is found to have the toxic effect on mosquito larvae.

CONCLUSION: Bacillus subtilis B50, a potent producer of biosurfactant was isolated and identified from among 75 isolates obtained from petroleum contaminated soil samples. The crude biosurfactant produced was characterized as lipopeptide and its larvicidal activity was determined. It was found that the mortality increases even at lower concentration when incubated for a longer period of time. LC100 was obtained at 1 mg % on 72 h of exposure. Thus it is suggested that biosurfactant can be used as a biopesticide to control the mosquito larvae.