INTRODUCTION: Enzymes are delicate protein molecules necessary for life. Pectin is a polymeric material having carbohydrate group esterifies with methanol. It is an important component of plant cell wall. It is present in highest concentration in the middle lamella, where it acts as a cementing substance between adjacent cells. Plant pathogens attack target cells by producing number of cell degrading enzyme which facilitates the entry and expansion of pathogen in the host tissue. The history of pectinases began with an understanding the structure of pectin substances and the mechanism by which pectolytic enzymes degrade pectic substances

Later the microbial production of pectinases became prominent for many decades. Many microorganisms viz., bacteria, yeast, fungi could produce pectinases 1.

Evidence showed that pectinases are inducible and they can produce from different carbon sources. In the course of time, numerous reports have appeared on the optimization of fermentation and microbiological parameters and different fermentation strategies for the production of pectinases.

With the advent of molecular biology, vigorous research has been carried out on cloning and expression of pectinase genes in various hosts. Among the various pectinase, bacterial extracellular pectinase are the most significant, compared with animal, plants, viruses and fungal extracellular pectinase. Extracellular pectinase produced by Bacillus and Cocci species are of main interest from a biotechnological perspective, and are not only in scientific fields of protein chemistry and protein engineering but also in applied fields such as foods, pharmaceutical and paper industries. These pectinases account for 10% of   the total worldwide production of enzymes 2.

The genus Bacillus and Cocci contains a number of industrially important species and approximately half of the present commercial production of bulk enzymes derives from the strains of Bacillus and Cocci. Pectinases are the single class of enzymes which play an important part in the metabolism of almost all organisms (plants, animals, fungi, bacteria and viruses). Investigation of Pectinases is a central issue in enzymology due to their wide applications in Pharmaceutical, Food, Agricultural products and Bioremediation process.

Pectinase (EC 3.2.1.15) belongs to the class hydrolase which are able to hydrolyse pectin more efficient than other Pectinases and their action are very specific, i.e., they acts only on pectin substrates. Pectin is a major constituent of cereals, vegetables, Pectin fibers are complex, high molecular weight heterogeneous and acidic structural polysaccharide. D-galacturonic acid is one of the major components of pectin 3.

Collection and isolation of sample: Samples were collected from dump yards of vegetable wastes at Solddevanahalli, Chikkabanavara, Devasandra, K.R. Puram, Tannary road and Yashwanthpur in and around Bangalore, Karnataka, India. The samples were labelled after collected. These were spread onto isolation media pectinase screening agar medium and incubated at 37oC for 24 hours after serial dilution of 10-1 to 10-6.

Isolation of Pectinase Producing Microorganisms: The isolates were screened for pectinase activity. This was done by inoculating the organisms on the pectinase screening agar medium (PSAM) plates containing 1gm pectin, 0.3gm Diammonium orthophosphate, 0.2gm KH2PO4, 0.3gm K2HPO4, 0.01 gm MgSO4 and 2.5 gm agar in 100 ml, the initial pH of medium was adjusted to 7 and incubated at 37oC for 24 hrs. The plates were flooded with 50 mM iodine solution and incubated for 15 min at 37oC. A clear zone around the growth of the bacteria was indicated to pectinase activity 4.

Protein Estimation of Crude Enzyme: The protein content of the crude enzyme was assayed   by using bovine serum albumin as the standard. Total activity and total protein are represented by U/mL and mg/mL, respectively, multiplied by the total volume of enzyme extract 7.

Medium Optimization for Pectinase Production: Carbon Source: To identify the suitable carbon sources for pectinase production by the Bacillus circulans. The following different carbon sources were tested such as glucose, sucrose, maltose, lactose, galactose, fructose and dextrose with sample concentration of 0.5% in the optimized carbon sources in production medium at 37°C 8.

Effect of pH: The effect of pH for pectinase production was determined by culturing the bacterium in the production media with different pH. The experiment was carried out individually at various pH 5, 6, 7, 8, 9 and 10. The enzyme assay was carried out after 72 hours of incubation at 37°C 10.

Effect of Temperature: Temperature is an important role for the production of pectinase. The effect of  temperature on pectinase production was studied by the incubating the culture media at various temperatures 10, 20, 30, 40, 50, 60,70 and 80°C along with arbitrary control  at 37°C 10.

Effect of Surfactants: To identify the surfactants facilitating pectinase production, four different surfactants were used for experimentation. They were Tween-20, Tween-80, SDS (Sodium dodecyl sulphate) and PEG (Poly Ethylene Glycol). The surfactants were tested individually at the concentration of 0.2% in the optimized production medium 11.

Effect of Various Incubation Times on Pectinase Production: The pectinase production by the selected experimental microorganisms was determined by optimizing the media by adding different bacteria in the production media. The experiment was carried out individually at various incubation times such as 24, 48, 72, 96 and 120 hours. The enzyme assay was carried out individually after 72 hours of incubation 12.

Screening of Pectinase Producing Bacteria from Dump yards of Vegetable wastes: The bacteria isolated from dump yards of vegetable wastes were screened for pectinase production on pectinase screening agar medium (PSAM). From the soil samples 10 bacterial strains were isolated. But later during screening it was found that only 6 strains showed pectinase activity. Later only one potential isolate was identified by standard morphological and biochemical characterization. After careful biochemical tests, it was confirmed that the isolate was Bacillus circulans. 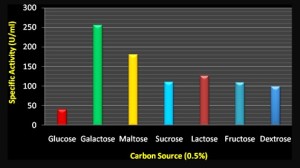 CHART 1: EFFECT OF VARIOUS SUBSTRATES ON PECTINASE PRODUCTION BY BACILLUS CIRCULANS UNDER SMF 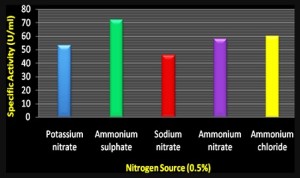 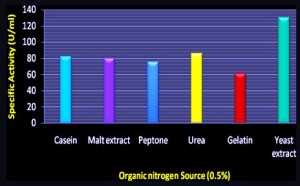 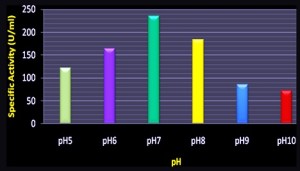 CHART 4: EFFECT OF VARIOUS pHS ON PECTINASE PRODUCTION BY BACILLUS CIRCULANS UNDER SMF

Effect of Surfactants on Pectinase Production: Chart 6 shows the effect of various surfactants on pectinase production after 48 hours of incubation at 50°C. The maximum amount of enzyme was recorded in Tween-80 (144U/ml) and minimum amount of pectinase was observed in PEG (90U/ml). 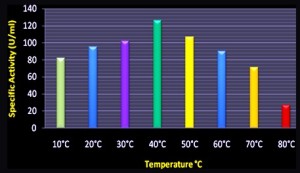 CHART 5: EFFECT OF VARIOUS TEMPERATURES ON PECTINASE PRODUCTION BY BACILLUS CIRCULANS UNDER SMF 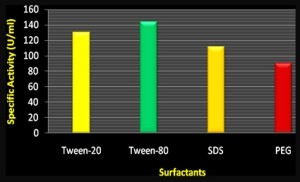 CHART 6: EFFECT OF VARIOUS SURFACTANTS ON PECTINASE PRODUCTION BY BACILLUS CIRCULANS UNDER SMF 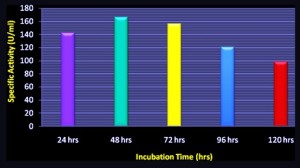 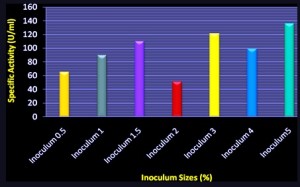 In the present study, ammonium sulphate was found to be the most suitable inorganic nitrogen source for Bacillus circulans and the enzyme activity observed was 72 U/ml. The lowest pectinase production was observed in sodium nitrate (46 U/ml) supplied medium. Lonsane et al. 16 reported that ammonium salts enhanced the enzyme activity. Sodium nitrate showed a negative influence, showing a steep decrease in "pectinase activity.

The effect of initial pH on SSF of pectinase showed that the pH range of 5-7 produced more amount of   pectinase and it was relatively high in pH 7.0 (236U/ml) and pH 8 (184U/ml).Above this level, the pectinase production decreased, because the metabolic activities of  microbes are very much responding to pH change.

Mrudula et al stated that at high pH, the metabolic action of bacterium may be suppressed and thus it inhibits the enzyme production. Physical factors are important in any fermentation for optimization of biochemical production. The important physical factors that determine the bioprocess are pH, temperature, aeration and agitation 21. In the present study, the effect of temperature on pectinase enzyme activity by SmF revealed that 40°C was optimum (126U/ml) and at the tested higher temperatures, the enzyme production decreased which might be due to growth reduction and enzyme inactivation or suppression of cell viability 22.

A similar result was reported by Smith22.  In contrast, low temperature values may reduce the metabolism of the microorganism and consequently, the enzyme synthesis. Surfactants in the fermentation medium are known to increase secretion of proteins by increasing the cell membrane permeability. In the present study, the addition of Tween-80 increases the pectinase production for Bacillus circulans (144U/ml).

Since the carbon source represents the energetic source that is available for the growth of the microorganism, it could be that the enzyme production is associated and the presence of galactose in the medium stimulated the increased production of the enzyme. An inoculums concentration higher than the optimum value may produce a high amount of biomass which rapidly depletes the nutrients necessary for growth and product synthesis.

On the other hand, lower inoculums levels may give insufficient biomass and allow the growth of undesirable organisms in the production medium. This increases the necessary time to grow to an optimum number to consume the substrate and synthesize the desired product.

In the present study, the highest enzyme activity (136U/ml) was obtained at an inoculums level of 5% by Bacillus circulans under SmF. Sharma et al.,23 reported that Bacillus pumilus showed increased enzyme production with the increase in inoculums size from the lowest value of 0.5ml and showed maximum enzyme activity at 2ml inoculums.

Conclusion: The above report stated the evidence for the production of pectinase with substrate interactions of bacterial strains with simple and effective manner. More over this study gives us values as well as the microbial wealth of pectinase producing bacteria which can be boon for the development of biotechnological processes.